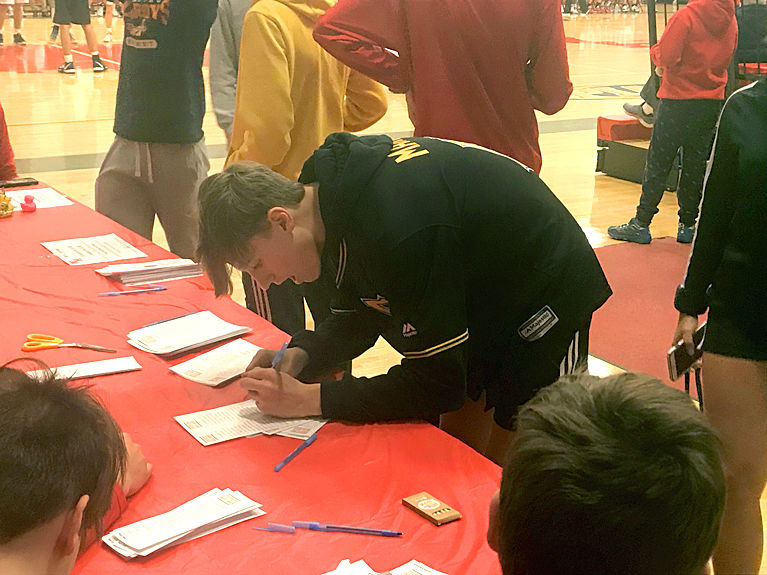 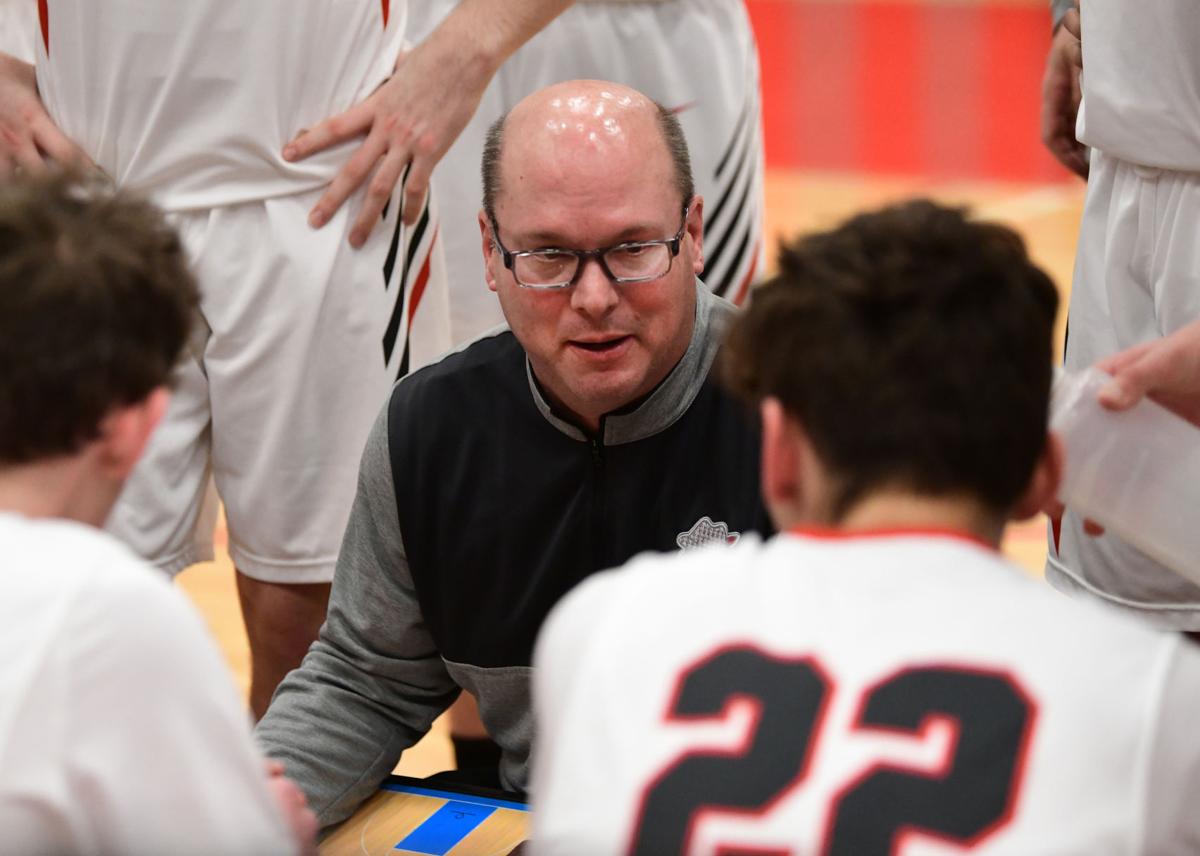 Westmont Hilltop boys basketball coach Dave Roman Jr. is partnering with a non-violence agency to help bring perspective to the student-athletes, with the Hilltoppers becoming the first athletic team in Cambria County to do so.

Coaching Boys into Men is a violence prevention program developed by Futures Without Violence.

During Monday’s boys and girls doubleheader, boys and men were asked to take part in Fan Pledge Day. Seventy-nine pledges were signed inside the entrance doors, stating any male in high school or older would take a stand against violence. Males recited the pledge before the boys game took place.

The message learned during the three-month process enlightened the Hilltopper boys basketball team.

“Mr. (William) Aurandt (high school assistant principal), he wanted a program for all of our sports teams to talk about how we treat women, how to treat other people and how we want to be treated,” senior Ashton Fortson said. “We were the first group he wanted to try this out with. It’s humbling for him to let us be the first group to try it out.”

Roman embraced the opportunity for his team to learn how to curb violence.

“Mr. Aurandt and the administration approached me about being the pilot program for this Coaching Boys into Men, so we met this fall as a group,” he said. “We also met with Carli Zanghi from Victim Services Inc. She kind of brought this program to our school. I was humbled that they selected me to take our team through it. I think it’s a very rewarding program.

“Just to bring awareness to domestic awareness, to relationship violence towards women and girls specifically. I hope that our entire male sports program will go through this.”

Heading this charge hit home for Roman. In addition to coaching the Hilltoppers, Roman is also the director of family ministries at West Hills Community Church.

“Being a husband and a father of a 13-year-old daughter, it’s real important,” Roman said. “My job outside of basketball, I work with kids every day.

“It was an important topic, and I think that’s why I was looking forward to being a part of this program. The statistics is 1 in 3 women will experience violence, either sexual or physical in their lifetime. There’s a great possibility that we all know someone that went through it.”

More than $500 was raised for Victim Services Inc.

The boys basketball team met as a group to talk about situations in which they can help.

“This was a great program for the kids. It was a 12-week program that we did before practice, once a week, sometimes if we missed we doubled up depending on our schedule,” Roman said. “It was a conversation starter. I think it brought some awareness to the kids on what to look for, to situations that they need to avoid, situations they need to look out for and to speak up on.”

With domestic violence spiking in recent years, the topic brought on another level of relevance to the team.

“I think it happens more now than it did back then, for sure,” Fortson said. “It just let us be aware of stuff that might be happening to people, so always go up and say ‘hi’ or ask them how they’re doing. Make sure they’re alright. If you see something, stop it when you can. If you can’t stop it, then go to an adult and get it settled.”

Victim Services put together an informational table in the hallway outside the gymnasium for any interested people to learn more about the topic.

“I think basically it’s just bringing more awareness on attitudes and social norms, and the way that we treat each other,” said Zanghi, the lead educator at Victim Services.

“I think that’s the most important thing that we want to accomplish here. We want them to be respectable not only here (in school) but carrying those ideas further into the community. We want the ripple effect to happen.”

Student-athletes have the platform to lead change within the school, according to both Zanghi and Roman.

Roman believes his team can spark a movement within the school and throughout the community.

“Athletes are leaders in the school,” Roman said. “The other kids look up to them. So if we can set an example of core values, especially behavior towards women, then I think we can set the tone really not only in the school but in the community as well.”

Ashton Fortson scored a game-high 35 points as the Hilltoppers defeated the visiting Huskies on Monday, clinching the third spot in the upcoming Laurel Highlands semifinals on Thursday.