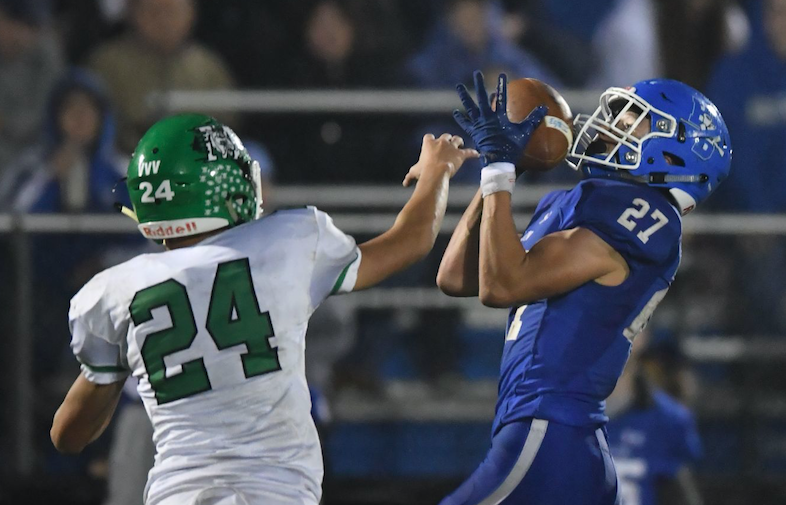 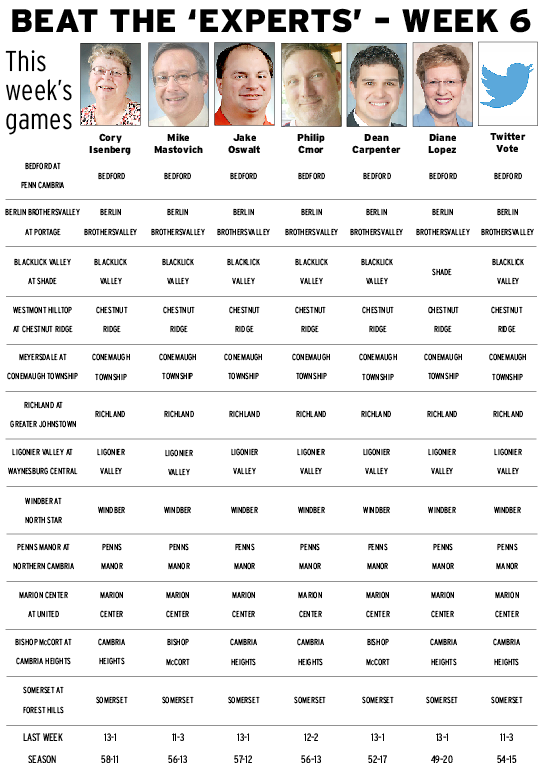 Berlin Brothersvalley coach Doug Paul has been through his share of difficult stretches during his 19 football seasons as a head coach.

Paul knows they don’t get much tougher than the back-to-back road trips on his Mountaineers’ schedule.

Berlin will play at Portage on Friday night – the second straight away game against an undefeated opponent.

The 5-0 Mountaineers will meet the 4-0 Mustangs in front of what most likely will be an enthusiastic but limited-sized crowd at the Mustangs field.

“Portage traditionally is one of the toughest places to play in the conference,” said Paul, whose teams are 8-2 against the Mustangs in 10 meetings since 2012. “We’ll be in a dogfight. Our kids need to understand that.”

The Mountaineers can look to last weekend as an example.

Then-undefeated Windber built a 14-0 advantage until the Mountaineers rallied in a 27-14 victory at Windber Stadium.

“Definitely it was a learning experience last week,” Paul said. “Windber came to play ball. We’ve got to show up from the get-go.

“Portage has got some tremendous skill kids. It’s your typical Portage defense. Their linebackers play downhill. They’re aggressive. They fly to the football.”

“They look like a veteran group that has been there before,” Slanoc said of the Mountaineers. “Things were going bad at Windber. They had a couple turnovers. Windber made some plays. They didn’t let it bother them. That doesn’t surprise me with that group. They’re well-coached.”

Against the Ramblers, Berlin Brothersvalley was led by senior quarterback Will Spochart, who rushed for 175 yards and two TDs, and senior running back Preston Foor, who gained 108 yards and scored a touchdown. Spochart has 686 rushing yards and Foor, 376, through five weeks.

“They’re dynamic. They’re patient runners. They’re both big threats,” Slanoc said. “If you sell out too much to stop that run, they’ll hit a pass. They’re very capable of making big plays.”

“We’ve got a bunch of unselfish kids that just like to play football,” Slanoc said.

“They’re really excited about the opportunity to play what we think is a really good Berlin team. They beat us down there last year and they have everybody back. We’ll do everything we can to slow them down.”

“I like our kids’ attitude and how they approach everything,” the Mustangs coach said. “They’re not afraid of this. They’re excited about the opportunity. You can’t be afraid to make mistakes in a big game like this.

“That’s what I really like about our kids. A nice group. They’ll give everything they’ve got, win or lose. We should find out a lot about ourselves.”

A look at the rest of the Week 6 games involving area teams. All starting times are 7 p.m., unless noted. Last meeting occurred in 2019 unless noted:

About the Vikings: Quarterback Jack Wurm threw a 29-yard touchdown pass to Kolten Szymusiak for the team’s lone touchdown in the loss to the Indians. For the season, Wurm is 52 of 122 passing for 531 yards and Szymusiak leads the team in receptions with 26 for 257 yards.

About the Panthers: For the second straight week, the team was held scoreless in the loss to the Mustangs. Shade is rushing for just 79 yards a game and has 73 yards a game in receiving.

About the Ramblers: John Shuster rushed for 91 yards on 11 carries and scored a touchdown, Aaron Willis threw a halfback option pass to Dylan Tomlinson for another score and Jordan Wright kicked a pair of extra points in the loss to the Mountaineers, who held the team scoreless in the second half.

About the Cougars: Connor Yoder threw touchdown passes to Carter Weible and Ethan Yoder, and Ty Maluchnik rushed for another touchdown in the loss to the Titans. For the season, Connor Yoder is 27 of 66 passing for 443 yards. Weible has 16 catches for 287 yards and Ethan Yoder has 10 for 136 yards. Maluchnik has 256 yards rushing on 31 carries.

About the Red Raiders: Briar Sheets threw a 59-yard touchdown to Devin Donica and Daulton Sellers scored from the 3 in the loss to the Blue Jays. For the season, Sellers has 17 catches for 187 yards and John Harvey has six for 114 yards.

About the Indians: Seth Rosey rushed for a pair of six-yard touchdowns while Jackson Byer scored a touchdown, had a fumble recovery and an interception in the win over the Vikings. Freshman quarterback Tanner Shirley completed 13 of 25 for 161 yards, with Byer getting seven catches for 79 yards.

About the Bisons: Mercury Swaim had 96 rushing yards and a score on seven carries and completed 6 of 11 passes for 93 yards and a touchdown in the win over the Highlanders. For the season, Swaim has thrown for 752 yards and rushed for a team-high 480 yards.

About the Panthers: Garrett Harrold rushed for one touchdown and threw to Nick Marinak for the other in the loss to the Rams. For the season, the team has rushed for 164.2 yards and passed for 141.8 yards per game. Harrold has thrown for 810 yards and rushed for a team-high 287.

About the Trojans: The team had it largest offensive output of the season in the loss to the Golden Eagles as Kareem Akanan rushed for a touchdown, Symeon Kobal threw to Tavione Thomas for another TD and freshman quarterback Jon Updyke ran 67 yards for another score, the biggest play of the night.

About the Hilltoppers: Three backs have accounted for 703 of the team’s 810 rushing yards led by senior Roy Dunn, who has 267 yards on 48 carries. Senior Hudson Holbay has accrued 260 yards on 57 carries while junior Madox Muto has provided 176 yards on 32 carries.

About the Lions: In the loss to the Marauders, Logan Pfister threw for 295 yards, going 16 of 32, and three touchdowns to Matt Whysong, including an 80-yarder, but three giveaways and a minus-2 turnover ratio affected the game’s outcome. Whysong had four receptions for 152 yards and Pfister rushed for a team-high 56 yards.

Note: Bishop Carroll Catholic announced on Thursday the Huskies will forfeit the game to Saltsburg, according to Athletic Director Dan McMullen. Injuries piling up and low numbers led to the decision to forfeit.

About the Comets: The team had 453 total yards and seven different players scored touchdowns in the victory over the Huskies. Senior Dimitri Lieb had three touchdowns while Kevin Baum and Connor Keith had two apiece. Both of sophomore Max Hill’s passes went to Lieb, who hauled in scoring passes from 16 and 21 yards.

About the Colts: Quarterback Mike Hoover scored the team’s lone touchdown in the loss to the Stingers. Hoover has thrown for 408 yards on 34 of 56 passing. Owen Prasko and Isaac Noll have combined for 1,034 yards rushing on 154 carries thus far this season.

About the Stingers: The team improved to 4-0 for the first time since 2009, forcing two turnovers with four sacks and holding a Colts offense averaging around 400 yards to 211 yards. Quarterback Ty Ryen finished 10 of 18 passing for 169 yards.

About the Lions: Hunter Cameron rushed for 415 yards with three touchdowns while teammate Eli Clevenger added 12 carries for 96 yards and two TDs in the loss to the Woives. Cameron has 950 yards on 113 carries and Clevenger, 32 for 149, thus far this season.

Last meeting: Teams have not played.

About the Rams: Against Serra, the team rushed for 109 yards led by Nick Beitel with 23 carries for 59 yards and Haden Sierocky, who had 48 yards on eight carries. Beitel scored the one touchdown and Sierocky threw to Matthew Marinchak for the other. Bruce Krieger added the conversion run.

About the Raiders: The team is only scoring seven points a game while yielding 35.2 on defense and has rushed for 713 yards and passed for just 31. Freshman Breydon Woods is the leading rusher with 436 yards on 97 carries while senior Darnell Johnson has chipped in 287 yards on 67 carries.

About the Crimson Crushers: Senior running back Brendon Bair rushed for a game-high 181 yards and three touchdowns on 23 carries and senior Ethan Marcozzi added 114 yards and two scores on 20 carries in the victory over the Red Devils.

About the Highlanders: Ryan Haluska scored from the 3 and Brett Harrison added the kick for the lone scoring in the loss to the Bisons. Haluska is the team leader in rushing with 508 yards on 91 carries while quarterback Ryan Bearer has thrown for 213 yards going 12 of 32.

About the Golden Eagles: Ethan Hemminger, one of six different ball carriers in the win over the Trojans, rushed for 124 yards on 12 carries and four touchdowns as the team won its second straight game. Hemminger has a team-high 340 yards on 49 carries for the season.

About the Rangers: Senior quarterback Zach Myers and freshman QB Jake Poldiak have combined to throw for 416 yards, going 32 of 74. The top receivers have been sophomore Jeremy Burda with six catches for 127 yards and junior Damon Crawley with 10 for 72 yards. Crawley also leads the team in rushing with 425 yards on 47 carries.

Veteran United High School coach Kevin Marabito has seen his senior back Hunter Cameron produce some amazing performances over the past four seasons.