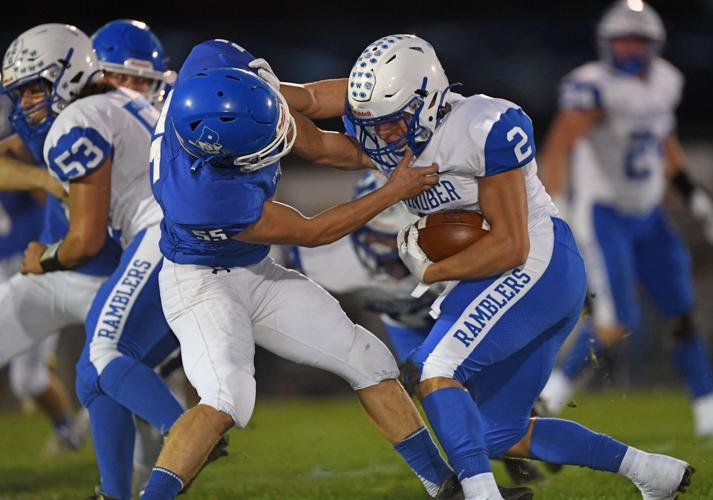 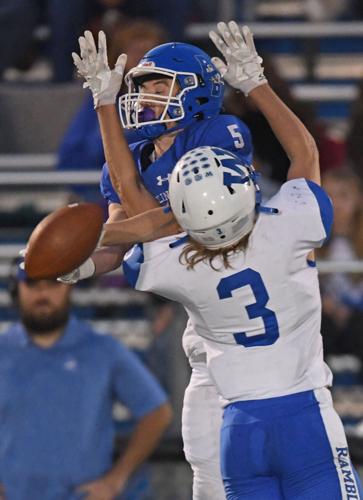 Berlin running back Ryan Blubaugh, top, can’t haul in a pass due to tight coverage by Windber safety Keith Charney during a WestPAC game in Berlin, PA., Friday, Oct.8, 2021. 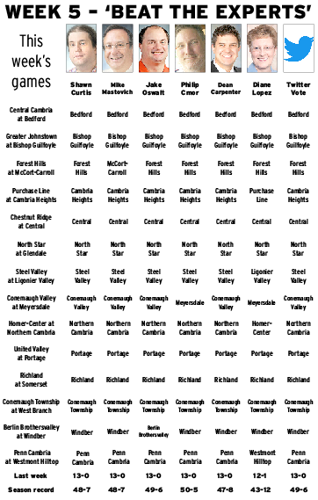 Berlin running back Ryan Blubaugh, top, can’t haul in a pass due to tight coverage by Windber safety Keith Charney during a WestPAC game in Berlin, PA., Friday, Oct.8, 2021.

The Berlin Brothersvalley defense has four shutouts through as many weeks this scholastic football season.

The Windber offense, with a potent ground attack, has produced at least 54 points in every game while scoring 223 points in four wins.

Flip the statistics. Berlin has tallied 174 points on offense, and Windber has only allowed 28 points on defense.

Will points be scarce? Will offensive fireworks prevail?

This midseason meeting of undefeated WestPAC teams will reveal as much at 7 p.m. Friday at Windber Stadium.

“Berlin looks a lot like we did last year,” Windber coach Matt Grohal said, referring to his veteran defense on a 2021 team that won the conference and Appalachian Bowl.

“They have no holes on the defensive side of the ball,” said Grohal, whose Ramblers won 20-6 last year at the Snyder of Berlin Complex and then blanked Berlin 27-0 in a District 5-8 Class 2A semifinal. “They fly to the football. They have 11 guys who can play. There is a reason they haven’t given up a point this year.”

Berlin coach Doug Paul said this might be the fastest Mountaineers defense in his 21 seasons as coach. The Mountaineers are ranked No. 10 in the latest Pennsylvania Football News Class 2A poll.

“The quickness. The speed we have on defense (makes it special),” Paul said. “This defense plays with an attitude, an edge.”

“The defensive line could all actually play linebacker,” Paul said. “Holby McClucas was all-county MVP at defensive end last season. Now we have almost a clone of him, Cooper Huston.

The interior linemen Cory Jose and Grant Mathias are doing their job. Cody Kimmel, our ‘Mike’ linebacker, is having a phenomenal season.

“On the backend, we have Pace Prosser making the calls,” Paul said of the defensive back. “Pace is a field general. He gets us in the right position.”

“The No. 1 guy on defense is McClucas,” Grohal said. “He’s an absolute freak, and his motor never stops. They do everything. They check all the boxes. As good as Prosser is on offense, he’s as equally good on defense. Their defense is stout from 1 to 11.”

Prosser has completed 38 of 57 passes for 667 yards, eight touchdowns and one interception. Ryan Blubaugh has 14 catches for 258 yards and four scores, and Josiah Rock has nine receptions for 195 yards and two TDs.

The Ramblers, ranked No. 8 by Pennsylvania Football News in Class 1A, are led on offense by the area’s top rusher, senior John Shuster, who has 883 rushing yards, with an area-high 14 touchdowns and 84 points. Junior Colin Marx has 268 yards and five TDs on the ground as Windber has rushed for 1,681 yards – 13 per carry and 420.3 a game.

“They’re a very talented football team,” Paul said. “Offensively, last year they had so many playmakers. Some of them graduated. They just plugged new kids in spots.

“Shuster is the engine that makes things run. You’ve got to be able to tackle him. If he gets into the open field, he’s gone.

“He has elite speed.”

The rest of the Week 5 schedule involving area teams, with all Friday kickoffs at 7 p.m.:

About the Blue Jays: Conemaugh Valley is coming off a bye week. Junior Eli Darr has a team-high 265 rushing yards and three TDs on 58 carries. Darr and senior Josh Stiffler each have a team-best 13 tackles. Junior Noah Graffius has 11 tackles, and senior Matt Jasper has 10 stops.

About the Indians: Undefeated Conemaugh Township has only allowed seven points over the past two weeks. The Indians have the area’s leading passer in Tanner Shirley, who has completed 52 of 81 attempts for 898 yards, as well as the top receiver in Jon Updyke, with 24 receptions for 530 yards.

About the Warriors: West Branch quarterback Tyler Wiggins carried 108 times for 834 yards and 13 TDs while averaging 7.7 yards a run. Wiggins also completed 14 of 39 passes for 248 yards and four TDs. The Warriors edged Glendale last week after falling to North Star in Week 3.

About the Red Devils: Central Cambria has produced points, but has allowed 42 or more points twice, including 50 points by Chestnut Ridge last week. The Red Devils have scored 115 points while allowing 119. Elijah Villarrial has 292 rushing yards on 42 carries.

Nolan Wyrwas has 21 receptions for 248 yards. Brady Sheehan has passed for 659 yards.

About the Bisons: Bedford has scored 174 points while allowing only 15. Last week, the Bisons had 33 first-quarter points and tallied 61 in a win at Somerset.

Ethan Weber is second in the area with 532 rushing yards on 25 carries, and Kevin Ressler has 291 yards on 21 attempts.

About the Trojans: Greater Johnstown had a 75-yard kickoff return by freshman Zymir Reed to pull the Trojans within a point of McCort-Carroll last week. Quarterback Anthony Atwood had a 53-yard run and 112 yards against the Crushers, but Greater Johnstown lost its 24th game in a row.

About the Marauders: Bishop Guilfoyle Catholic lost at undefeated Penn Cambria last week to even its record.

Marauders quarterback Karson Kiesewetter passed for 224 yards and rushed for 95, with three rushing TDs last week for the defending Class 1A state champions.

About the Rangers: Forest Hills still is winless after playing four teams with a combined 14-2 record.

About the Crushers: McCort-Carroll churned out 296 rushing yards, including 132 by senior quarterback Johnny Golden, who scored three TDs in a win at Greater Johnstown. The Crushers averaged 6.3 yards a run last week and had 16 rushing first downs. Andrew Pakstis blocked a 29-yard field goal attempt by the Trojans.

About the Scarlet Dragons: Central snapped an uncharacteristic two-game losing streak last week, but the schedule presents another tough test as the Lions visit.

Senior Jeff Hoenstine has 882 passing yards with 12 touchdowns and only one interception. Hoenstine also leads the team with 48 tackles. Hunter Smith has 44 stops. The Dragons defense doesn’t have an interception this season.

About the Rams: Undefeated Richland is coming off a tough test against Westmont Hilltop. Rams quarterback Sam Penna has completed 70.9% of his passes, going 39 of 55 for 565 yards, five TDs and one interception. Evan McCracken tops the team in rushing (283) and receiving (180) yards. Sophomore Austin Yarnick has 10 catches for 168 yards and two TDs.

About the Red Dragons: Purchase Line hits the road after dropping two straight at home.

About the Wildcats: Homer-Center will try to snap a two-game losing streak after dropping a high-scoring game against West Shamokin as the teams combined for 106 points.

Landon Hill has 463 rushing yards and nine TDs on 70 carries.

Cole McAnulty passed for 148 yards and two scores and rushed for 119 yards and three TDs.

About the Colts: Peyton Myers had a 54-yard catch-and-run for a touchdown late in the fourth quarter of the win against United Valley. The Colts have outscored opponents 118-47. Colton Paronish has 324 rushing yards. Peyton Myers has 21 catches for 248 receiving yards. Owen Bougher has thrown for 491 yards.

About the Lions: United Valley had another close game, but lost by a touchdown against Northern Cambria to remain winless. Junior Caden McCully has 38 tackles, all but two of those solo stops. Last week, McCully ran for 166 yards on 27 carries and scored two touchdowns against the unbeaten Colts.

About the Mustangs: Portage overcame a halftime deficit with 28 unanswered points in a victory at Purchase Line.

The Mustangs have won two straight since a tight loss at Cambria Heights in Week 2. Andrew Miko is among the passing leaders, connecting on 20 of 44 attempts for 400 yards. Bode Layo has six catches for 221 yards and his seven TDs for 44 points rank seventh in the area. Isaac Jubina has 326 rushing yards.

About the Ironmen: Steel Valley has rushed for 1,085 yards in three games, an average of 11.7 a carry and 361.7 a game. The Ironmen have 19 rushing TDs and four backs who went over the 100-yard mark in only three contests.

Senior Cruce Brookins has 450 rushing yards and 11 TDs, and Quaron Pierce has 250 yards and one TD.

About the Rams: Ligonier Valley bounced back in a big way last week, as Haden Sierocky rushed for 150 yards and two touchdowns, caught four passes for 37 yards and a score, recovered two fumbles and intercepted a pass against Apollo Ridge.

Broderick Schreyer has passed for 302 yards this season.

About the Cougars: North Star struck first against undefeated Windber last week, but the Ramblers rolled to a 41-point victory. Connor Yoder passed 28 yards to Isaac Berkey for a TD, and Yoder hit Max Vish for an 11-yard score. Berkey has 240 receiving yards on 11 catches.

About the Vikings: Winless Glendale has scored 46 points while allowing 107. Senior Zeke Dubler has a team-high 399 rushing yards and three TDs on 53 carries. Junior quarterback Troy Misiura completed 24 of 51 passes for 202 yards, and senior Logan Cree has nine receptions for 111 yards.

About the Panthers: Penn Cambria has outscored opponents 165-89, tallying 42 points in each of the first three games and 39 in a high-scoring contest against Bishop Guilfoyle Catholic last week. Running back Zach Grove scored three of his four touchdowns against the Marauders in the fourth quarter and rushed for 153 yards on 15 carries.

About the Hilltoppers: Westmont Hilltop won’t flip the light switch as part of this “throwback” homecoming afternoon game at the upgraded Price Field. The Hilltoppers will try to snap a three-game losing skid against one of the conference’s undefeated teams.

Gavin Hockenberry is among the area leaders with 522 rushing yards on 74 carries.

When Penn Cambria coach Nick Felus talks about balance, he is looking beyond the obvious statistical data that has his undefeated Panthers rushing for 863 yards and 11 touchdowns and passing for 810 yards and 11 scores.