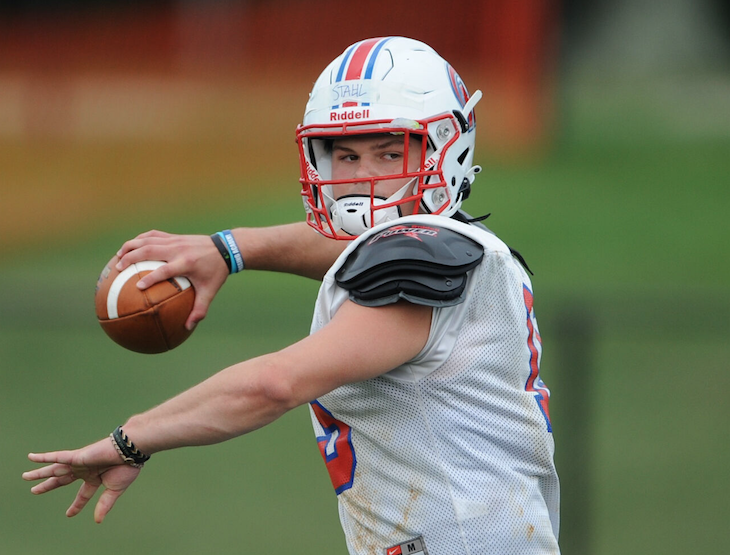 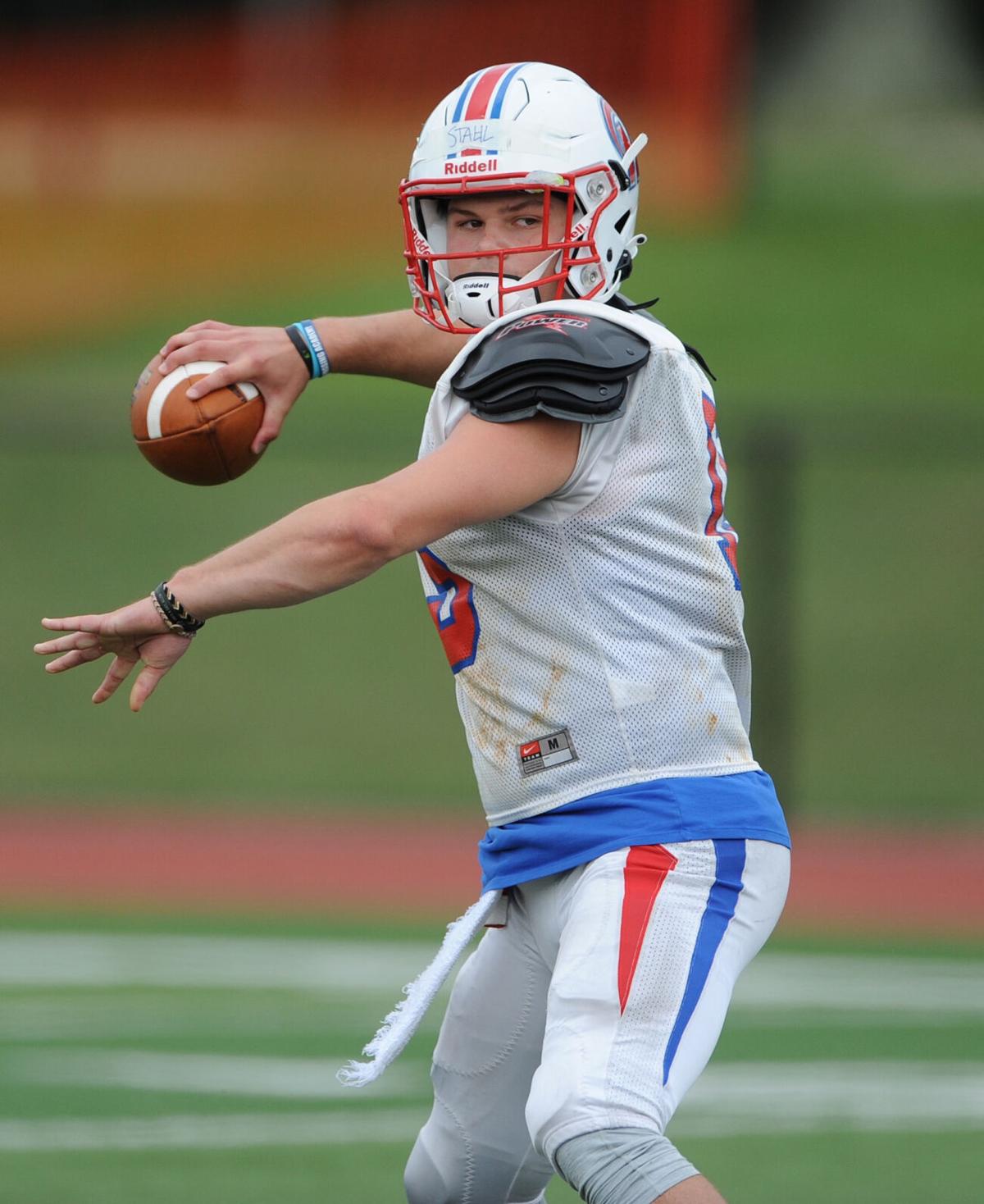 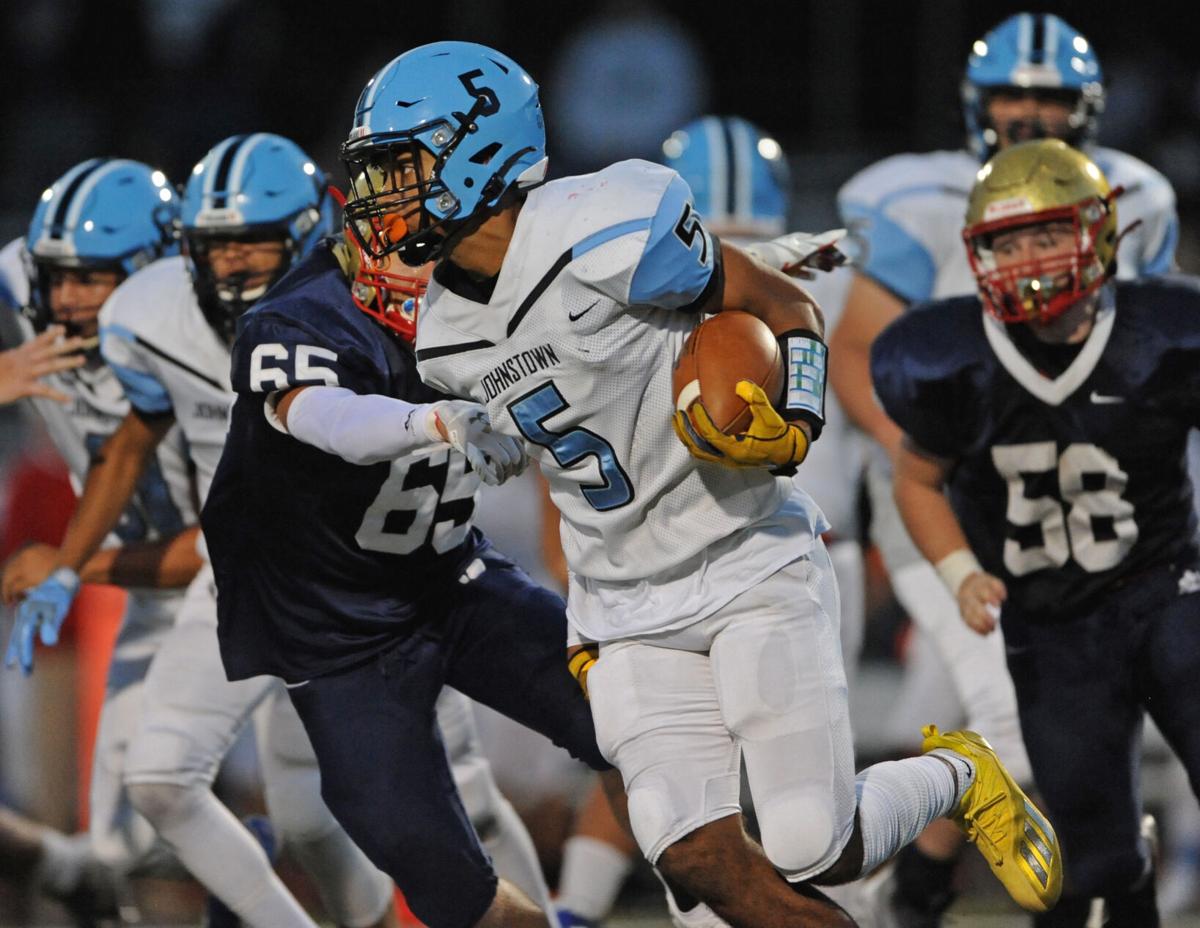 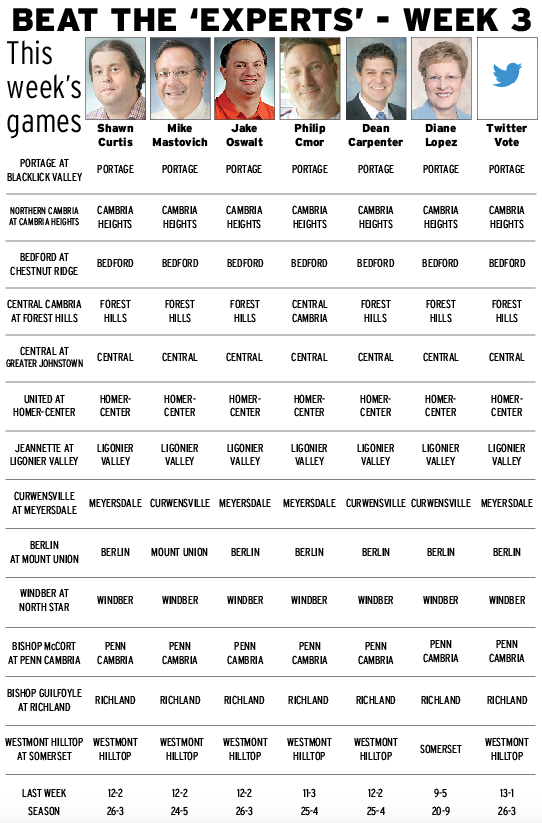 “In two games, he’s had 14 drives as the starting quarterback and we’ve scored 14 touchdowns, which is amazing,” Bailey said.

Maintaining such a pace in the Laurel Highlands Athletic Conference is unlikely, especially with what most likely will be a determined Bishop Guilfoyle Catholic team visiting Herlinger Field on Friday in a match of conference powers.

But there is no denying that Stahl is a playmaker, a leader and a winner.

“It’s pretty special,” said Bailey as his 2-0 Rams prepared for 1-1 Bishop Guilfoyle Catholic, a statewide power in the conference and Class 1A over the past decade. “Not many people in our conference or District 6 have hit that 5,000-yard mark. It’s a testament to him and the longevity he’s had over the last several years.”

Stahl is in his third season as the starting quarterback of the Rams. As a freshman, he was a defensive standout but saw some time in the wildcat formation. He even sparked a struggling Richland offense in a LHAC-clinching victory at Chestnut Ridge in 2018.

The Rams are 36-4 with three straight District 6 Class 2A crowns in the four seasons Stahl has been in the lineup – 23-5 as the starter at quarterback.

“From early on, as a freshman he came up and contributed a lot of defense, some running back and some wildcat quarterback for us,” Bailey said. “From that point, you saw he was a great competitor. He loves to play the game.

“Going into his sophomore year, he continued to get a better grasp of the offense and how to attack the defenses. It’s been great to have him last two years,” Bailey added.

Stahl threw for 282 yards and four TDs in last week’s 49-14 win at Westmont Hilltop. He has completed 29 of 41 passes for an area-best 544 yards with seven TDs and no interceptions through two weeks.

“I’ve coached a lot of quarterbacks through the years,” Bailey said. “He’s definitely one of the more vocal leaders I’ve had.

“Kellan leads by example and by his voice. He’s an emotional leader as well.”

Other area games follow below. Unless otherwise noted, all starting times are 7 p.m. and last meeting was in 2020.

About the Bisons: Bedford’s potent offense has scored 99 points in two weeks while the defense only has allowed 21. The Bisons’ junior standout Ethan Weber scored three TDs in three different ways – a 17-yard pass, a 7-yard run, and a 72-yard punt return – in last week’s win over Somerset. Senior John Burkett blocked a punt that resulted in a safety against the Golden Eagles.

About the Lions: Chestnut Ridge bounced back after a Week 1 loss to Central by scoring 56 points at Central Cambria. Nick Presnell and Jonah Hillegass combined for 218 yards and six touchdowns on the ground. Hillegass had TD runs of 20, 25 and 27 yards while Presnell had a team-high 147 rushing yards. The Lions have 547 rushing yards in two games.

About the Red Devils: Central Cambria has allowed 104 points in two home losses against top-tier LHAC squads. The Red Devils offense did show progress with a three-touchdown game against Chestnut Ridge. Hobbs Dill had a game-high 148 rushing yards against the Lions.

About the Rangers: Forest Hills’ Damon Crawley had 165 rushing yards in last week’s loss to Central and leads the area with 388 yards on 33 carries. Matthew Colton Danel and Easton Toth each have two sacks. Forest Hills had a five-game winning streak in the series until the Red Devils’ victory in 2020.

About the Scarlet Dragons: Central’s prolific passing game is led by quarterback Jeff Hoenstine, who has completed 39 of 54 passes for 648 yards, 10 touchdowns and no interceptions through two weeks.

Eli Lingenfelter fronts a group of four receivers who have 100-plus receiving yards. Lingenfelter has nine catches for 215 yards and four TDs.

About the Trojans: Greater Johnstown made big plays in the city rivalry loss to Bishop McCort Catholic last week.

Coby Christian, who is second in the area with 202 receiving yards on nine catches, had touchdown receptions of 20 and 88 yards. Anthony Atwood had an 81-yard fumble return for a score and a 76-yard TD run.

About the Crimson Crushers: Bishop McCort Catholic notched its first win of the season behind a strong effort by quarterback Trystan Fornari, who rushed for 220 yards and four TDs and passed for 156 yards and a score. Fornari has completed 34 of 58 passes for 362 yards. His five touchdowns and 34 points lead the area.

About the Panthers: Penn Cambria’s rushing attack has accounted for 644 yards on 82 carries through two weeks. That’s an average of 7.9 per run and 322 a game. Quarterback Garrett Harrold is second in the area with 377 rushing yards and is fifth with 284 passing yards. The Panthers beat the Crimson Crushers last season to snap McCort’s five-game win streak in the series.

About the Hilltoppers: Westmont Hilltop has rushed for 290 yards on 83 carries, an average of 3.5 per run and 145 a game. Gavin Hockenberry has a team-high 122 yards on 15 carries. Junior quarterback Eli Thomas is 7 of 18 for 191 passing yards. The Hilltoppers have won the past five games in the series, limiting Somerset to single-digit scoring in the last three meetings and a combined 40 points since 2016.

About the Golden Eagles: After a Week 1 COVID-19 cancellation, Somerset got back onto the field but encountered a powerhouse Bedford team that scored on all seven of its first-half possessions in Week 2. Somerset’s Ethan Hemminger had a 92-yard kickoff return and a 1-yard touchdown run against the Bisons.

About the Mustangs: Portage opened at 2-0 for the fifth straight year and posted its second straight 300-plus rushing performance of the season in a win over Meyersdale. Oren Heidler had a team-best 156 yards as the Mustangs finished with 308. Heidler (274), Jon Wolford (229) and Kaden Claar (153) all are among the area’s top-12 rushers.

About the Vikings: Braydon Brown passed 5 yards to Kolten Szymusiak and Josh Hessler ran 3 yards for a score last week at Windber. Szymusiak has seven catches for 90 yards and a score this season. Nathan Schilling has 19 tackles and Aaron Gdula, 15, through two weeks.

About the Colts: The two border rivals will meet for the first time in seven years in the Coal Bowl now that the teams are in the same conference.

Peyton Myers (124) and Owen Bougher (112) have combined to run for 236 yards in two contests. The Colts held leads of 7-6 and 13-12 over Homer-Center before falling last week. Xander Dolansky had a 21-yard rushing TD, and Colton Paronish scored on an 8-yard run.

About the Highlanders: Cambria Heights leads the Coal Bowl series 23-21-1 dating to 1960. The Highlanders joined the Heritage Conference this year, setting up a regular date against the Colts. Ryan Haluska has 143 rushing yards and three TDs on the ground. Ty Stockley has 154 passing yards and one TD.

About the Lions: United continues to navigate through a difficult stretch. River Valley and Purchase Line combined to outscore the Lions 90-8. Evan Thomas and Caden McCully each have a team-high 11 tackles for United.

About the Wildcats: Northern Cambria led Homer-Center by a point at halftime, but the Wildcats answered with 20 consecutive points in a solid road victory. Collin Troup (185) and Landon Hill (105) combined for 290 rushing yards through two weeks. Justin Walbeck has 24 tackles.

About the Jayhawks: Two opponents have outscored Jeannette by a combined 122-0. The Jayhawks went 10-2 last season with a WPIAL title and an appearance in the state Class 1A championship game. But according to published reports, multiple players transferred, leaving the program to build around an inexperienced group.

About the Rams: Ligonier Valley picked up a huge road win at Class 3A Elizabeth Forward, handing the Warriors their first home setback since 2018. The Rams will play their first home contest hoping to build on a string of 27 straight home wins (including two forfeit wins) since losing to Central on Nov. 6, 2015. Ryan Harbert (27), Kaden Faas (21) and Billy Sugden (21) combined for 69 tackles. Jacob Hay had four sacks against Elizabeth Forward.

About the Ramblers: These teams encountered uncertainty on Thursday as each of their games were canceled due to COVID-19 situations involving their respective opponents.

This game was a late addition even though the same teams are scheduled to meet in Week 8.

Windber has scored 108 points while allowing only 14 through two weeks. Keith Charney has seven catches for 147 yards, and John Shuster has 19 carries for 289 yards.

About the Cougars: North Star overcame a two-touchdown deficit to take the lead against Conemaugh Township last week before falling by a point. The Cougars’ Connor Yoder has 306 rushing yards on 46 carries. Cody Hause has two interceptions.

About the Mountaineers: Berlin’s Ryan Blubaugh has 11 catches for 187 yards, fourth-best in the area. Sophomore quarterback Pace Prosser threw to Blubaugh, who caught the ball and lateraled to Carson Modrak on a game-winning, hook-and-ladder touchdown play in the closing seconds against Conemaugh Valley.

About the Trojans: Originally, Bishop Carroll Catholic was on the Berlin schedule in Week 3, but that game was eliminated when the Huskies joined Bishop McCort Catholic in a co-op during camp. The Mountaineers were set to take a bye week, but eventually sought an opponent and connected with Mount Union. The Trojans have 86 points in two games. Mount Union was to play Tussey Mountain but a COVID-19 situation canceled the game.

Week 3 of the high school football season was filled with uncertainty, twists and turns on Thursday.