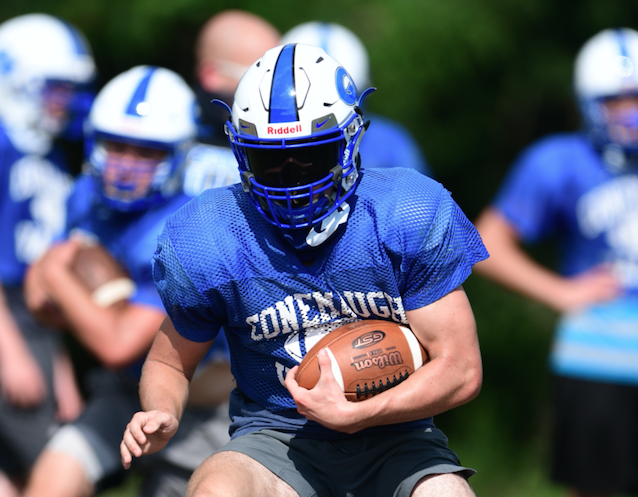 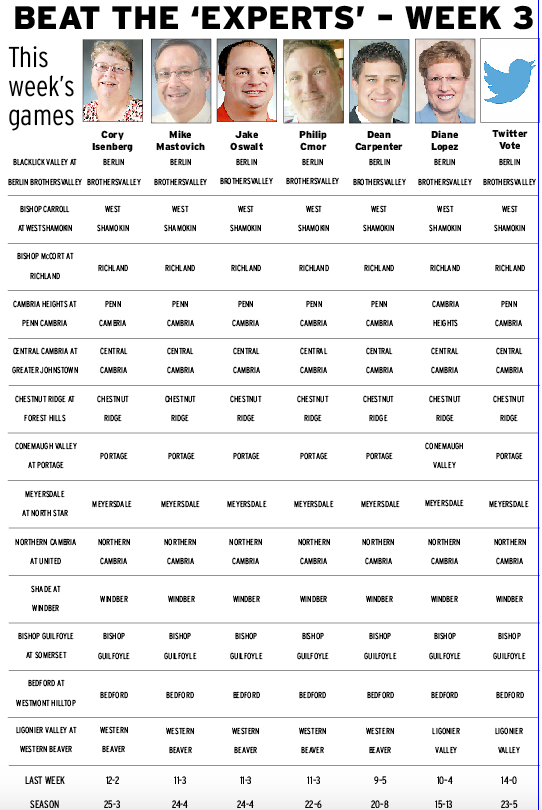 This is a different type of season for both Conemaugh Valley and Portage, and it’s not just because of the uncertainty created by the COVID-19 pandemic.

Consider that Conemaugh Valley is 2-0 for the first time since 2008 entering Friday’s WestPAC matchup at Portage.

“We’ve just got to keep doing what we’re doing and getting a little better each week,” second-year Conemaugh Valley coach Matt Kent said. “If we get those little things worked out, I think we’ll have a pretty good go at it.”

The Blue Jays continue to evolve in their double-wing offense as players from the recently approved co-op with former conference rival Ferndale Area jell among their new teammates. Valley had to forfeit four games last season due to low numbers but now has more than 40 players on the roster.

Meanwhile, Portage has a new head coach for the first time since Gary Gouse’s debut season in 1991. Former Mustangs star back Marty Slanoc, a longtime assistant coach, has led Portage to a 2-0 start as the next in line following Gouse’s retirement.

The traditional Wing-T heavy Mustangs have moved the ball through the air perhaps more than fans are accustomed to seeing.

“We’re trying to mix it up a little more,” Slanoc said. “We’ve got a lot of skill guys this year.

“That’s the strength of our team. We have an offensive line and a defensive line that each are coming along. In the past, we used to use the run to set up the pass more.”

“We knew coming into the season, changing things up offensively, we were going to be ahead of the game defensively,” Slanoc said. “Our guys on defense understand their roles and what we need to do. We’re trying to rally around them as our offense keeps improving.”

Conemaugh Valley has the area’s top rusher in junior back Logan Kent, who had 380 yards on 47 carries. Junior Nick Heltzel has 199 rushing yards on 20 attempts.

“We just try to keep running this double-wing offense,” Coach Kent said. “It gives us the option to run both sides. If they decide to try to stack a side on us, we can run the other way. It keeps it pretty hard for the other team to decide what we’re going to do.

“The guys up front do an excellent job. They’re paving the way for Logan and Nick. They’re opening up some good holes.”

Conemaugh Valley hasn’t started a season with three wins in 12 years, when those 2008 Blue Jays went on to a 4-5 record.

The most recent win over Portage was a 14-13 stunner at Trojan Stadium in 2011, a game that was delayed a few days and moved due to a heavy snowstorm.

“It feels awesome to start off like this,” Coach Kent said. “When you’re not used to starting like this you’ve got to keep the kids’ heads level. You have to take it one game at a time. We don’t want to get too far ahead of ourselves.”

Portage is accustomed to playing these types of contests in a big-game atmosphere.

Portage Area School District released its updated guidelines for attendance at home sporting events. A total of 2,000 people, including participants in the game, will be permitted into Portage Stadium, according to the statement.

Each student-athlete participating in the game, both home and away, will be provided with two tickets to ensure that parents have an opportunity to attend. The remainder of the tickets will be distributed on a “first-come, first-served” basis until the limit is met, according to the statement.

A capsule look at the rest of the Week 3 games follows:

About the Vikings: Quarterback Jack Wurm found Kolten Szymusiak for a 26-yard score in the loss to Meyersdale. Wurm is 20 of 59 for 192 yards passing while Josh Little leads the team in rushing with 66 yards on 16 carries.

About the Mountaineers: Will Spochart carried the ball 23 times for 264 yards on the ground and reached the end zone four times against Conemaugh Township. He also completed six passes for 58 yards and intercepted a pass and returned it 45 yards for a touchdown. Charlie Fisher also returned an interception for a touchdown.

About the Red Raiders: Evan Brenneman rushed for 56 yards while adding two touchdowns, then had a strip sack in the final minute of play which sealed the victory for Meyersdale in the win over Blacklick Valley.

About the Cougars: North Star scored its first points of the season when Ty Maluchnik rushed for a 54-yard touchdown then Mitchel Pristas threw a 27-yard touchdown pass to Issac Berkey for the team’s other score against Portage.

About the Panthers: Before going down with an injury, quarterback Braden Adams rushed for 118 yards on 15 carries. Adams found Kaden Koleszarik for a 57-yard TD and scored on a 2-yard dash then ran in the two-point conversion against Conemaugh Valley.

About the Ramblers: Aaron Willis scored five touchdowns, three on offense, one on defense and one on special teams, plus intercepted a pass in the road win over Hanover Area. John Shuster leads the team in rushing with 277 yards on 38 carries.

About the Crimson Crushers: Amir Ortega-Andrews scored a pair of touchdowns, 12 and 47 yards, in the loss to Chestnut Ridge. Ortega-Andrews leads the team in rushing with 113 yards on 14 carries while Ethan Marcozzi has added eight carries for 51 yards.

About the Rams: Junior quarterback Kellan Stahl threw a touchdown pass to sophomore Ryan McGowan, rushed for another score and then passed to sophomore Sam Penna behind the line, and Penna threw to Griffin LaRue, who completed a 69-yard scoring play against Bedford. Running back-middle linebacker Jacob Sabol left the game with an injury.

About the Highlanders: Junior running back Ryan Haluska rushed for 92 yards. He leads the team with 291 yards on 50 carries. Cambria Heights was without running back Jared Fox, who suffered an injury in practice prior to the Central Cambria game.

About the Panthers: Senior wideout Nick Marinak accounted for 160 yards on just six touches, scoring two touchdowns in the win over Somerset. Quarterback Garrett Harrold rushed for 116 of his game-high 149 yards and he also supplied 131 yards through the air, hitting Brandon Storm and Braden Phister for touchdowns. Carter Smith added 68 yards on the ground.

Hobbs Dill led his team with 101 rushing yards and a pair of scores and Levi Keiper added another touchdown. Quarterback Ian Little was 6-for-9 with 115 yards passing and two touchdowns.

About the Trojans: Symeon Kobal completed 13 of 22 for 177 yards. D’Andre Sampson caught five passes for 99 yards as the team finished with 221 passing yards against Westmont. Kobal is 26 of 46 for 375 yards for the year while Sampson has eight catches for 120 yards and Ibn Shaheed has 94 yards on nine receptions.

About the Lions: Matt Whysong had 146 yards on seven catches and Trevor Weyandt added three receptions for 17 yards in the win over McCort. Quarterback Logan Pfister passed for 192 yards and two scores and rushed for 76 yards in just three quarters of action. Jonah Hillegass added two touchdowns.

About the Rangers: Quarterback Zach Myers has thrown for 178 yards going 13 of 32 while Damon Crawley has rushed for a team-high 186 yards on 28 carries.

About the Marauders: In coach Justin Wheeler’s 100th career victory, Keegan Myrick rushed for 143 yards and two touchdowns. Junior receiver Haiden Garner caught a 5-yard touchdown and rushed for a 33-yard score, finishing with 94 yards on six carries, three passes for 20 yards, and was 2-of-4 passing for 39 yards.

About the Golden Eagles: Somerset rushed for 240 yards with three ball carriers – Bryce Mulhollen (71 yards), Ethan Hemminger (69 yards) and Bradley Bruner (51 yards) – over the 50-yard mark against Penn Cambria. Bruner scored on runs of 1 and 11 yards. The team lost three fumbles and was assessed 85 yards in penalties.

About the Huskies: The Huskies managed just 115 yards of total offense in last week’s loss to United.

About the Wolves: Quarterback Bo Swartz passed for 267 yards going 20 of 26 in Week 1, but the Wolves had problems against conference power Homer-Center in Week 2.

About the Colts: Northern Cambria totaled 294 yards, all but 11 on the ground, with Owen Prasko rushing for 200 yards on 28 carries and Isaac Noll contributing 70 rushing yards on 19 attempts. Prasko scored all three touchdowns, including two in the fourth quarter to erase a 12-10 deficit.

About the Lions: Hunter Cameron rushed for 117 of United’s 186 total offensive yards in the team’s first on-field victory since the end of the 2018 season. The winning touchdown against Bishop Carroll was a 20-yard touchdown pass from Elijah Clevenger to Jacob Boring, with the two also combining on the two-point conversion.

About the Rams: In their first  WPIAL win in 50 years, sophomore quarterback Haden Sierocky finished with a game-best 92 yards on 15 carries, and completed 4 of 9 passes for 69 yards. He also picked off a pass on defense. Nick Beitel added an interception return for a TD and had 75 rushing yards on 19 attempts.

About the Golden Beavers: The team broke a 7-7 tie with 15 points in the second quarter  to secure the victory over Beaver. Thad Gray led the way for Western Beaver, returning an interception 82 yards for a score and picking up a teammate’s fumble and running 22 yards for another TD.

About the Bisons: Junior quarterback Mercury Swaim completed 13 of 21 passes for 222 yards and two touchdowns. He carried 14 times for 73 yards and a score as Bedford snapped Richland’s 22-game conference winning streak stretching to the final game of the 2017 season.

About the Hilltoppers: Roy Dunn (123 yards on 15 carries), Hudson Holbay (119 yards and three touchdowns on 20 totes) and Madox Muto (10 carries for 90 yards) combined for 45 carries, 332 yards and five touchdowns in the victory over Johnstown. The starting time was moved back an hour because of SATs on Saturday morning.