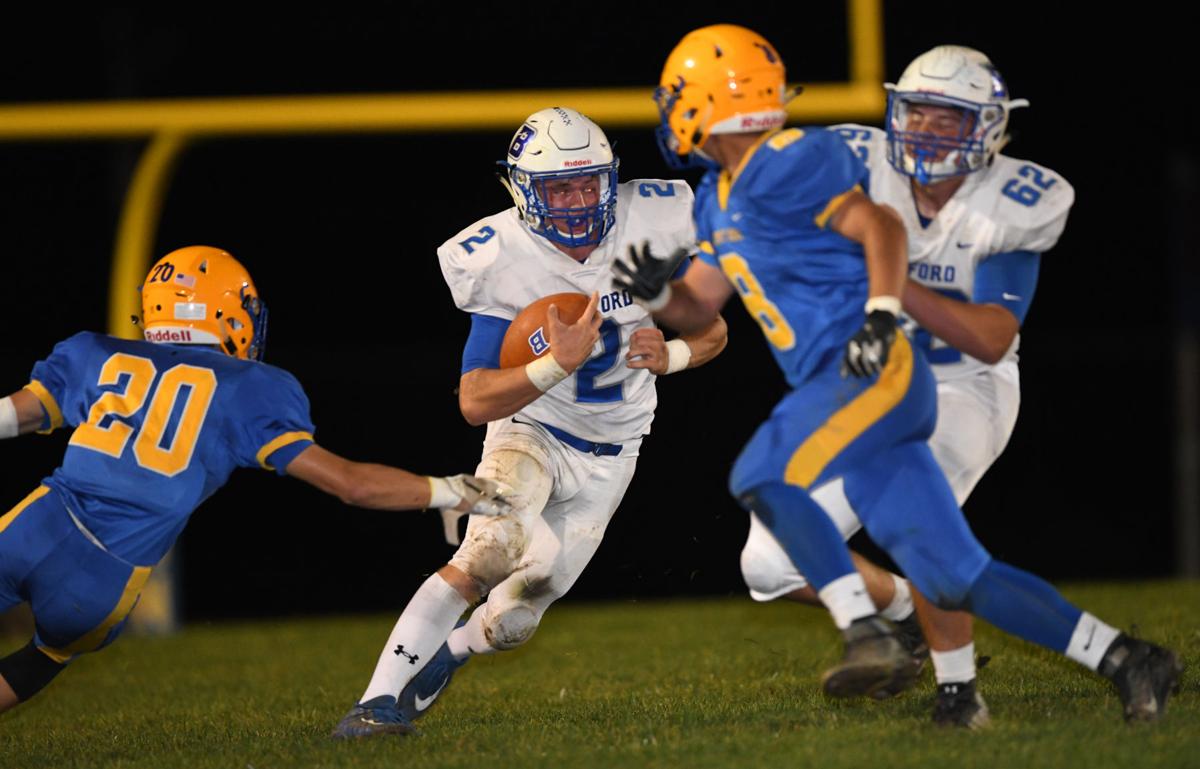 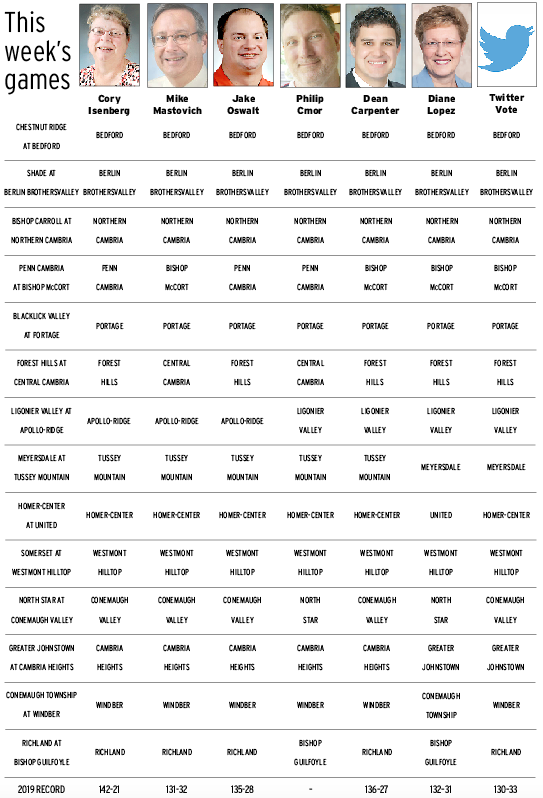 The often unpredictable and wild ride to the 2020 season-opening weekend of high school football finally has arrived amid the months-long uncertainty amid the COVID-19 pandemic.

Marquee matchups dot the schedule on Friday and Saturday, as 14 games involving teams in The Tribune-Democrat coverage area are set.

• Bedford County rivals Chestnut Ridge and Bedford will play on Friday, while Somerset County combatants Conemaugh Township and Windber will meet on Saturday in a game pushed back a day.

• One (Ligonier Valley) will join the WPIAL and another (Bishop Carroll Catholic) will play a Heritage Conference schedule.

• And, a pair of rivals (Conemaugh Valley and Ferndale) now are part of a co-op that will increase numbers and potentially, the win total.

Here is a look at Week 1 (the last meeting category occurred in 2019 unless otherwise noted):

About the Lions: Chestnut Ridge won its first eight games in 2019 but lost three of its final four contests. The lone win in that stretch, against Berlin Brothersvalley, gave the Lions their fourth straight 5-AA crown. Senior Logan Pfister is back after accounting for 2,696 total yards and 26 touchdowns.

About the Bisons: The coaches’ preseason pick atop the conference, Bedford opens the season amid high expectations thanks to a veteran group. Two of the Bisons’ three losses last season came by a combined three points. Junior Mercury Swaim passed for 936 yards and rushed for 800 while combining for 24 TDs through the air and on the ground.

About the Panthers: Penn Cambria sophomore quarterback Garrett Harrold passed for 1,676 yards and ran for 285 in 2019. The Panthers are looking for their first win over Bishop McCort since 2014 and will try for their first road win over the Crimson Crushers dating to when the teams first played in 1980.

About the Crimson Crushers: First-year head coach Tom Smith will rely on the leadership of four-year starting back/linebacker Brendon Bair. Junior Nate Conrad and sophomore Trystan Fornari looked to replace graduated quarterback Will Miller during preseason camp. The Crushers are 25-4 against Penn Cambria since 1980.

About the Rangers: Second-year head coach Justin Myers has more experience, with 19 returning letterwinners, than a year ago when the Rangers went 1-9. Junior running back Damon Crawley totaled 1,321 all-purpose yards and 12 TDs last season.

About the Red Devils: Central Cambria will debut its newly renovated field with an artificial surface and state-of-the-art amenities. The Red Devils have a deep and experienced receiving corps with the top-five pass-catchers back, including senior Nick Wyrwas (27 receptions, 404 yards).

About the Panthers: Shade looks for consistency after an up-and-down 2019. Following a 2-3 start, Shade split its final six games, winning three straight before dropping the last three dates against Windber, Homer-Center and Tussey Mountain in the 5-A playoffs. Senior Vince Fyock caught 56 passes for 1,080 yards and 10 TDs last season.

About the Mountaineers: Berlin Brothersvalley is the preseason pick atop the conference with 10 starters returning on both offense and defense from a 10-win team. Versatile veteran quarterback Will Spochart had 1,778 total yards and 15 TDs in 2019.

About the Vikings: Juniors Rudy Lanzendorfer, Nate Schilling (130 tackles) and Kolten Szymusiak (203 receiving yards) are experienced players for Blacklick Valley. The Vikings were 3-4 through seven weeks but dropped their final three contests to Windber, Berlin Brothersvalley and Blairsville.

About the Mustangs: Marty Slanoc might be a first-year head coach replacing an icon after Gary Gouse’s retirement. But Slanoc also has been part of the Mustangs staff for more than 20 years and was a star running back as a player. Portage won the WestPAC and advanced to the Appalachian Bowl and District 6 playoffs in Gouse’s final year, but dropped both postseason games.

About the Huskies: Bishop Carroll will take the spot vacated by Ligonier Valley in the Heritage and will play games much closer to home after facing Mountain League opposition the previous two years. New coach Bubba Fatula is the seventh Huskies head coach in 10 seasons. Linebacker T.J. Novak led the team with 54 tackles in 2019.

About the Colts: Northern Cambria returns seven starters on both offense and defense. Senior quarterback Mike Hoover passed for 1,285 yards and four TDs. The teams haven’t met in 17 years, with high stakes the last time they played in the District 5-6 Class A title game at Mansion Park, where the Huskies won on their way to a PIAA Class A runner-up finish.

About the Wildcats: Homer-Center has experienced players back from a team that won a first-round District 6-A playoff game. Senior quarterback Ben Schmidt and senior receivers Travis Mock and Drew Kochman are returnees as well as junior running back Justin Walbeck.

About the Lions: United was hit by low numbers and injuries last season, forfeiting two games and opening 0-9. The Lions picked up a forfeit victory over Conemaugh Valley in the WestPAC-Heritage crossover series. Standout Hunter Cameron returns as the school's all-time leading rusher.

Last meeting: Have not played.

About the Rams: Ligonier Valley officially begins its return to the WPIAL after spending the past 50 years in District 6 and dominating the Heritage Conference with four straight undefeated seasons from 2016-19. Ligonier Valley previously was in the WPIAL for 43 years from 1923 to 1968-69 before joining District 6 for the fall of 1969 season. Veteran coach Roger Beitel said the 30 players on his preseason roster were the fewest in his 17 seasons.

About the Vikings: Apollo-Ridge returns many of the key faces from a team that won six of its first seven games last season. The Vikings return their leading rusher and tackler, senior Logan Harman, who gained 1,415 yards and had 18 TDs and made 92 tackles. Senior quarterback Jake Fello threw for 1,110 yards last season, and senior Klay Fitzroy had 621 receiving yards and six TDs.

About the Red Raiders: Meyersdale won its first seven games last season and was 9-1 before falling to Berlin Brothersvalley in the District 5-AA semifinal round. Three starters are back on both offense and defense. Senior Briar Sheets and sophomore Daulton Sellers are in the quarterback mix.

About the Titans: Defending 5-A champion Tussey Mountain returns senior Kaden Lucko, who gained 1,592 yards and had 10 100-plus rushing games. Senior Chad Morningstar had a team-high 118 tackles and 12 sacks. Lucko had 90 tackles, and senior Nicholas Brumbaugh had seven sacks.

About the Golden Eagles: Coach Brian Basile is new to the Golden Eagles but is a familiar face in the conference after spending the past five seasons at Bishop McCort Catholic. Somerset welcomes back four starters on offense and five on defense. Leading tackler Ethan Hemminger made 60 stops last season and returns at defensive back.

About the Hilltoppers: The District 6-AAA runner-up in 2019, Westmont Hilltop will rely on seniors Hudson Holbay (987 rushing yards) and Roy Dunn (356 rushing yards) in the double wing offense with senior Alex Ray moving into the quarterback spot. The Hilltoppers ran 603 times for 3,783 yards last season, an average of 315.3 a game and 6.3 a carry.

About the Cougars: Bob Landis takes over as the Cougars head coach after nine seasons at Somerset. He welcomes back five starters on each side of the ball, including Ty Maluchnik, who rushed for 754 yards in 2019. North Star is looking for its first winning season since 2013.

About the Blue Jays: After a winless season that included four forfeits due to a lack of numbers, Conemaugh Valley has more than 40 players on the roster after a co-op with rival Ferndale was approved during the first week of practice. The Blue Jays now have depth and experience heading into the season. The Jays have lost 13 straight games since Week 8 in 2018 (34-32 over Berlin).

About the Trojans: Greater Johnstown will build around three returning starters on both offense and defense. The Trojans relied on a large group of underclassmen in 2019 and those players are a year older and have been tested. Senior Symeon Kobal and freshman Jon Updyke give coach Bruce Jordan two solid options at quarterback, where the Trojans must replace prolific passer Sammy Barber.

About the Highlanders: Cambria Heights will play the first varsity game on the newly renovated, artificial turf field. The Highlanders also will open their final season in the LHAC as Heights will move to the Heritage Conference in 2021. Senior running back Jared Fox gained 701 yards and had eight TDs last season.

*This game originally scheduled on Friday night was moved to Saturday, according to the Windber School District.

About the Indians: Senior Seth Rosey has made 104 tackles and had 17 sacks during the past two seasons. In coach Tony Penna’s second season in Davidsville, the Indians return eight starters on offense and 10 on defense. Township has won four of the past six meetings in the series, including three straight from 2014-16.

About the Ramblers: Coach Matt Grohal said the move to Saturday was made because Windber students were sent home on Tuesday as a coronavirus-related precaution. His team would not have had the PIAA-mandated number of practices required unless it held a practice on Friday. Windber has a 38-27-2 record in the Somerset County rivalry since 1960. Sophomore John Shuster returns after gaining 1,478 rushing yards, including 236 yards and four TDs in last season’s opener against the Indians.

About the Rams: Richland will travel to Mansion Park in a season-opening marquee game between two conference powers. The Rams have won 20 consecutive LHAC games en route to a pair of conference and 6-AA crowns. Junior quarterback Kellan Stahl returns after throwing for nearly 3,000 yards (2,993) and 43 TDs in 2019. Leading tackler Jacob Sabol (120) is back on defense.

About the Marauders: Bishop Guilfoyle Catholic finished as the Class A state runner-up last season after falling 10-7 in overtime to champion Farrell. Keegan Myrick is back after carrying 271 times for 1,777 yards and 24 TDs. Senior Andrew Yanoshak had 135 tackles and 20 sacks last season. Since 2012, the Marauders are 98-14 with three state titles and one runner-up.

The state Senate voted 39-11 to send Gov. Tom Wolf a bill that would allow school districts to determine how many spectators can attend scholastic sporting events and other extracurricular activities.