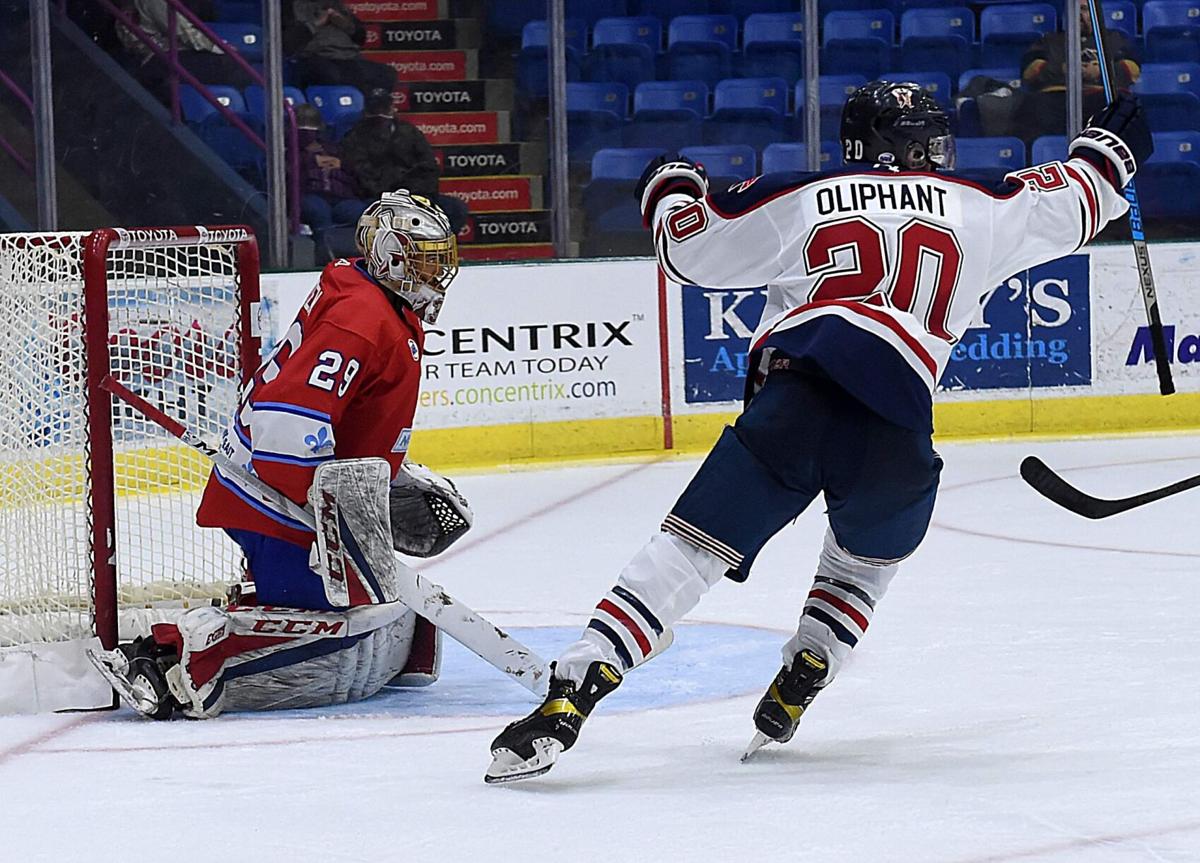 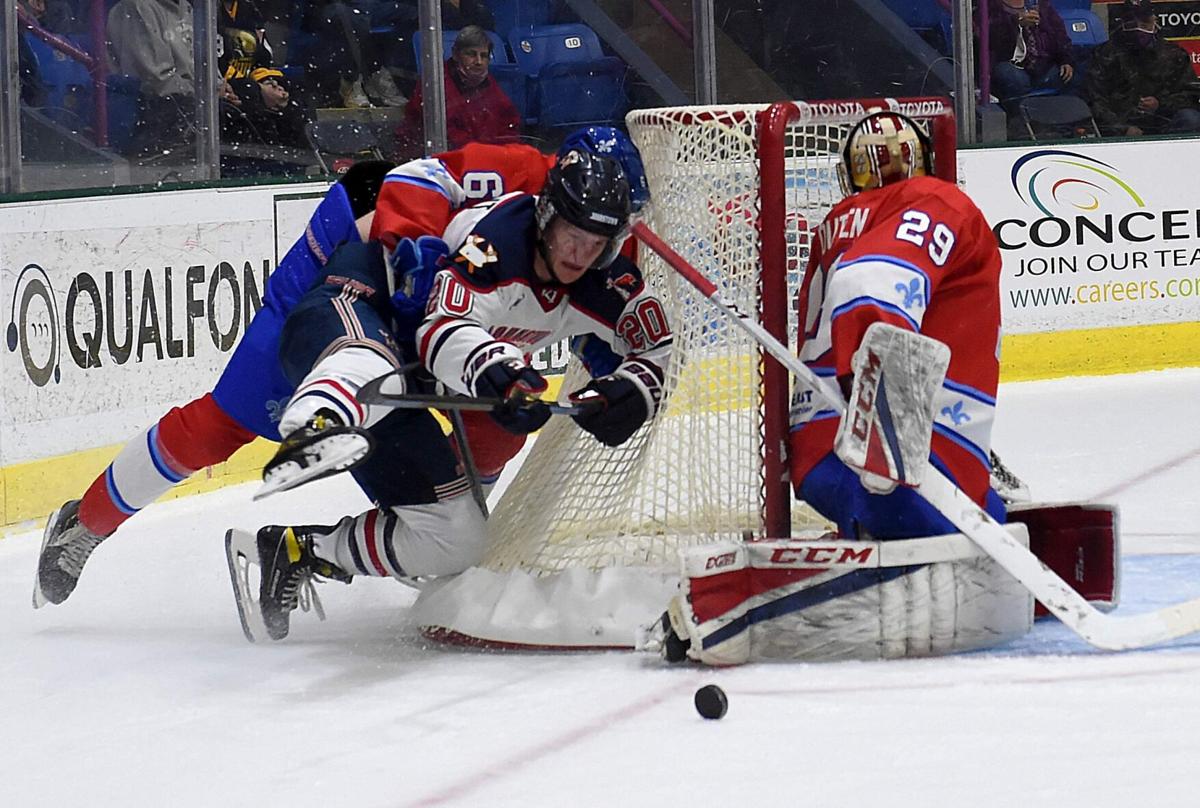 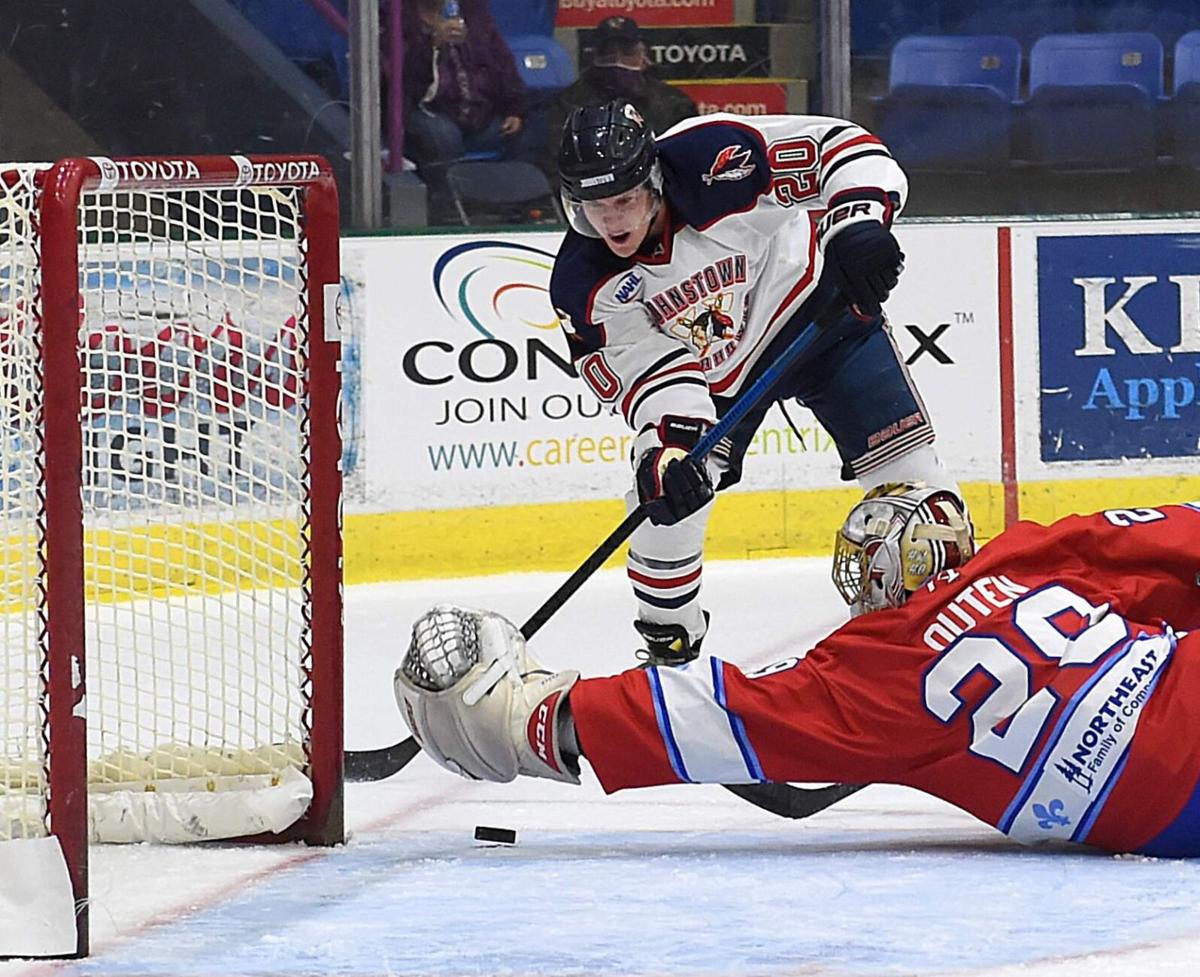 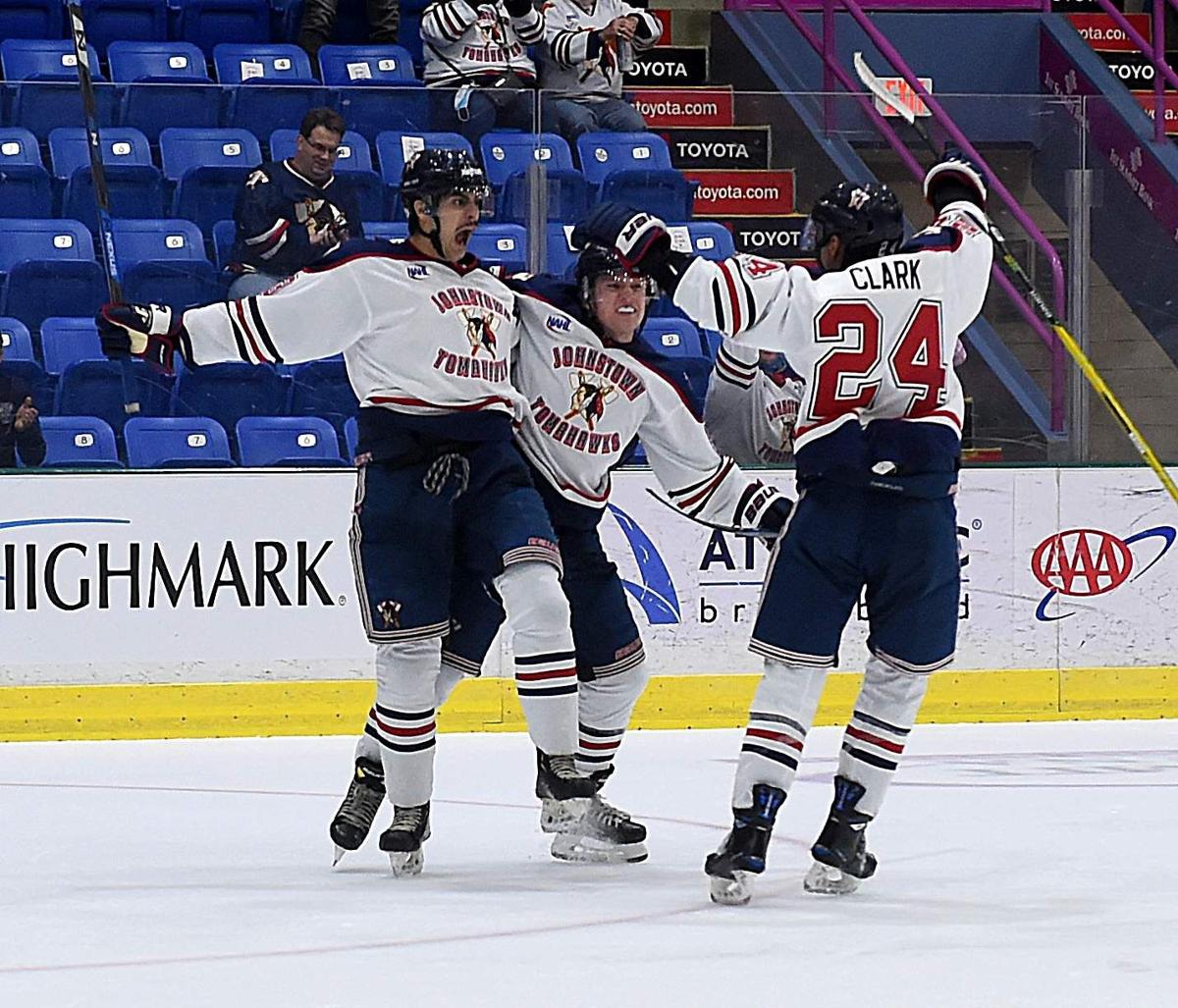 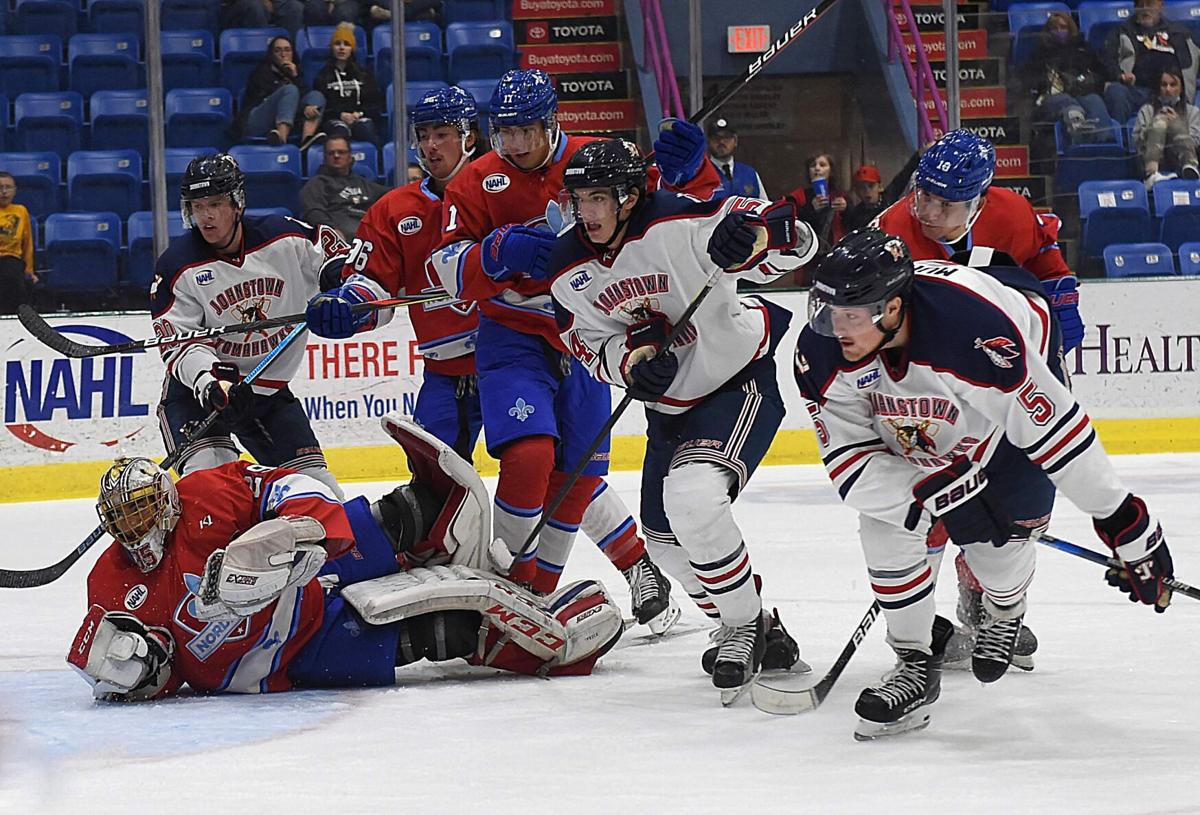 Tomahawks players battle for the puck in front of Nordiques goaltender #29 Tyrig Outen on Saturday, Oct. 17, 2020 at 1st Summit Arena.

Tomahawks players battle for the puck in front of Nordiques goaltender #29 Tyrig Outen on Saturday, Oct. 17, 2020 at 1st Summit Arena.

After opening the season with three consecutive overtime contests, a couple dramatic comebacks and one shootout, the Johnstown Tomahawks emphatically created a cushion in the third period of Saturday night’s NAHL game.

The Tomahawks scored four straight goals in the final 12 minutes, 24 seconds to knock off the previously undefeated Maine Nordiques 5-2 in front of an estimated 1,000 fans at 1st Summit Arena @ Cambria County War Memorial.

“It was big for our team,” said veteran Johnstown forward Andrew Murphy, who netted the game-tying goal 7:36 into the third period. “We kept on grinding. We wanted to get those two points. We got them.

“We battled hard. We never stopped. We didn’t want that overtime. We wanted the game-winning goal in the third period.”

Coach Mike Letizia’s team split a pair of overtime games last Sunday and Monday at the Maryland Black Bears. After falling behind 6-1 in the season opener, the Tomahawks rallied to win 7-6 in overtime.

The next day, Johnstown squandered a two-goal third period lead and fell 4-3 in overtime at Maryland.

During Friday’s home-opener, the ‘Hawks once again went into the extra session and Maine needed a shootout to finally edge Johnstown 3-2 – even though the hosts collected 51 shots on goal.

The Nordiques took a 1-0 lead 1:20 into the game after Stefan Owens took a rebound of Isaiah Fox’s initial shot and beat goaltender Connor Stroebel, who saw his first action at the War Memorial.

“Strobs, first NAHL start, and he gets a win,” Letizia said. “He was pretty calm in there. They had an early goal. He made the initial save and they banged home the rebound. He was square. He was solid. He stayed composed.

“He’s getting better every day in practice. We felt it was time to get him a start and he delivered.”

The Tomahawks tied the score 8:18 into the middle period. Forward Jay Ahearn took the puck behind the cage and with a defender on him, he backhanded the puck into the slot, where captain Alex Gritz trailed the play and took the shot that landed inside the far post.

Goal...@JohnstownHawks tie it at 1 vs Maine Nordiques. The captain Alex Gritz nets his first of the season. Ahearn and Poorman has assists. pic.twitter.com/RycYxy2IqV

Maine’s Reese Farrell scored 1:56 into the final period to put the Nordiques ahead 2-1.

Andrew Murphy capitalizes on a Maine miscue and buries his first goal of the season 7:36 into final period. @JohnstownHawks and Nordiques tied at 2 pic.twitter.com/a0LU9f6IGs

Murphy tied it 7:36 into the third period after a Nordiques turnover in Johnstown’s offensive zone.

“It was just a bad bounce on their part,” Murphy said. “It bounced right to me in the high slot. I took the shot and trusted it. It found the back of the net.”

Holt Oliphant netted his first of the season at 11:24 to give Johnstown it’s first lead of the contest. Anthony Mastromonica and Brendan Clark had assists.

Clark scored at 17:41 to make it a two-goal contest, and Max Neill hit the empty net with 41 seconds remaining and his team skating short-handed.

“It was definitely pretty big for us. We definitely needed that win after (Friday) night when we couldn’t find the net,” Clark said. “It feels great. The boys are fired up.”

“In that type of game, you’d like to see that not happen,” Letizia said of the short-handed situations. “Whether they were penalties or not, you can’t go back and change the call. You just have to kill them off. Our guys did a great job.”