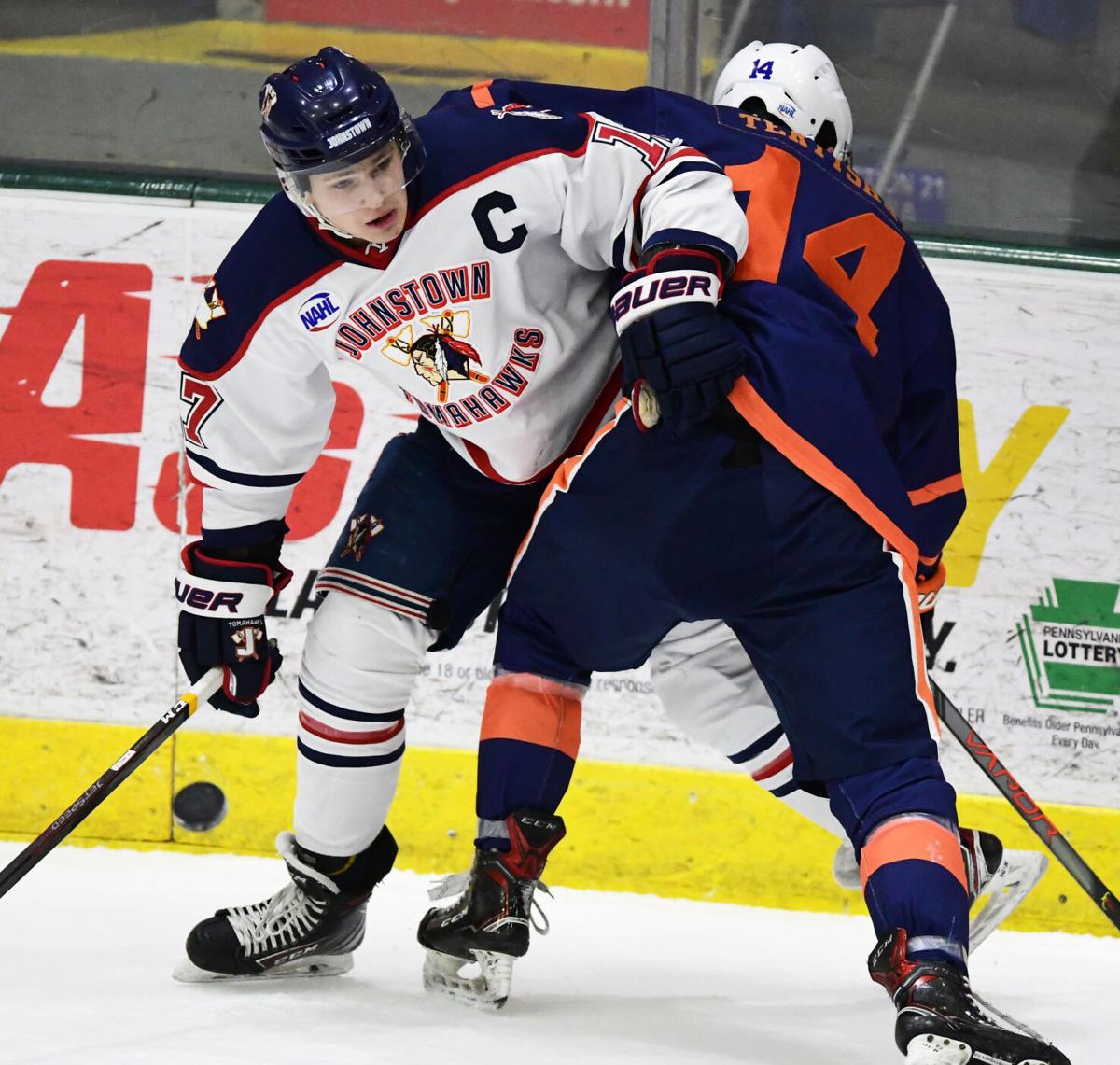 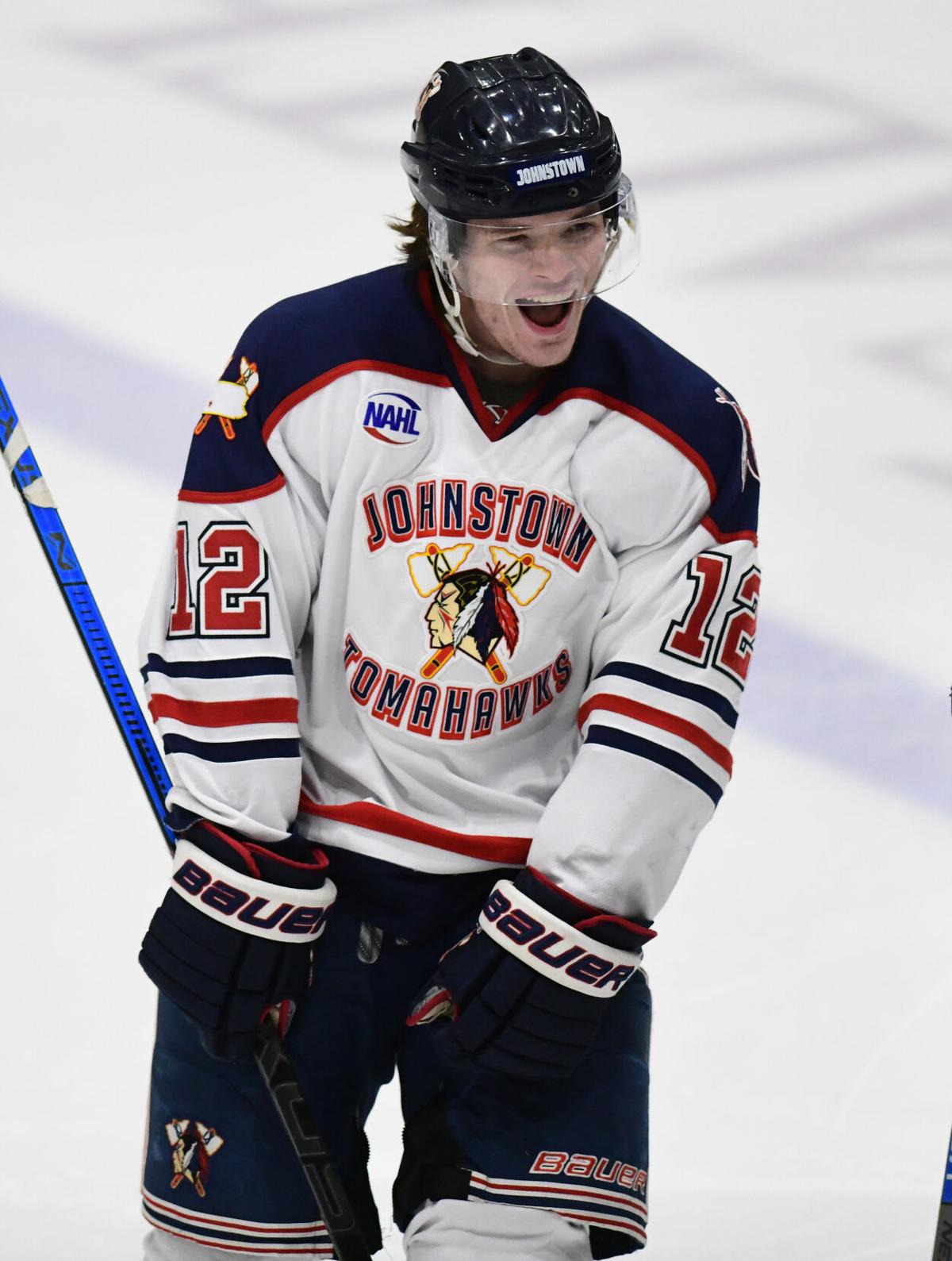 The Johnstown Tomahawks once again established a big lead on Saturday night at 1st Summit Arena, but this time they had to fend off a late comeback by the Northeast Generals.

The final result was very familiar, as the Tomahawks won 4-3 to take a share of first place in the NAHL East Division and improve to 10-0-1 on home ice this season.

“It was a good team effort,” said Tomahawks forward John Gelatt, who netted the eventual game-winning goal 4:59 into the second period. “We got a good lead at the beginning. They scored a couple at the end, but we found a way to win.”

Coach Mike Letizia’s squad took the first two games of a three-game series against Northeast. The teams play at 1 p.m. on Sunday.

“It’s always tough playing three games in three days,” said Tomahawks captain Alex Gritz, who had a power-play goal on Saturday. “I think tonight got away from us a little bit in the third, but we had a lot of guys selling out tonight. It’s not just one or two guys.

“Guys up and down the lineup, everybody is doing their job. Everybody is doing what it takes to win. I couldn’t be more proud of this group. There are some things we have got to clean up but at the same time I think we’re doing a lot of things and moving in the right direction.”

With the Tomahawks skating short-handed, Jay Ahearn got free along the right-wing boards and snapped a shot from inside the circle. He continued skating behind the net and was able to wrap-around the rebound into an opening 10:27 into the game.

“A good play,” Letizia said. “He wrapped it. Hearnsie with the highlight reel type of goal. It seems like it’s every night with him.”

The short-handed tally was Ahearn’s 16th goal of the season. Ryan Poorman assisted.

Jay Ahearn nets a short-handed goal for his 16th of the season. ⁦@JohnstownHawks⁩ lead Northeast Generals 1-0 at 10:27 pic.twitter.com/mYim2Q9wLY

Gritz scored his power-play goal on a shot taken from inside the left-wing circle and through a crowd in front of goaltender Hugo Haas at 11:46.

“Simplified it,” Letizia said of the power-play unit. “I thought we did a great job of retrieving pucks and Gritzy put a beautiful shot against the bar.”

In the second period, Northeast’s Brent Keefer pulled the Generals within 2-1 on a power-play tally at 2:08.

But Johnstown’s Anthony Mastromonica reestablished the two-goal margin by scoring only 25 seconds later. Poorman and Will Margel had assists.

“It was huge,” Letizia said of the quick answer. “Same thing happened (Friday) when we gave up one goal and came back and scored on the same shift with the same guys, actually. Credit to them to bounce back and get the momentum back on our side.”

The Tomahawks’ Gelatt worked for a rebound along the left side of the cage to score his 16th goal of the season at 4:59 to make it 4-1 and chase Haas. Goalie Anton Castro entered and stopped all 24 shots he faced.

“I thought their goalie did a good job when they made the goalie switch,” Letizia said. “He made some big saves; not allowing that score to be extended. I thought we had some good chances to do it and he came up big.”

Northeast’s Jonathan Young dug out the puck from a flurry in front of the net and put the puck past a screened Johnstown goaltender Peyton Grainer 8:42 into the final period. Tyler Cooper converted a 4-on-3 power play to make it a one-goal game at 15:52.

Tyler Cooper 4-on-3 PPG pulls Northeast Generals within 4-3 of ⁦@JohnstownHawks⁩ with 4:08 left. pic.twitter.com/LEXeXUK7VB

Grainer (35 saves) and the ‘Hawks held off the Generals.

The teams will have a little more than 12 hours until the series finale.

“Get a good night’s sleep. Get a good meal. Get hydrated,” Gritz said. “It’s the last game of the week. Come out with the same mentality and finish strong.”

Power-play opportunities-Northeast 2 of 5; Johnstown 1 of 4.

The Johnstown Tomahawks built on a statistical trend in a 6-2 victory over the Northeast Generals on Friday night at 1st Summit Arena.