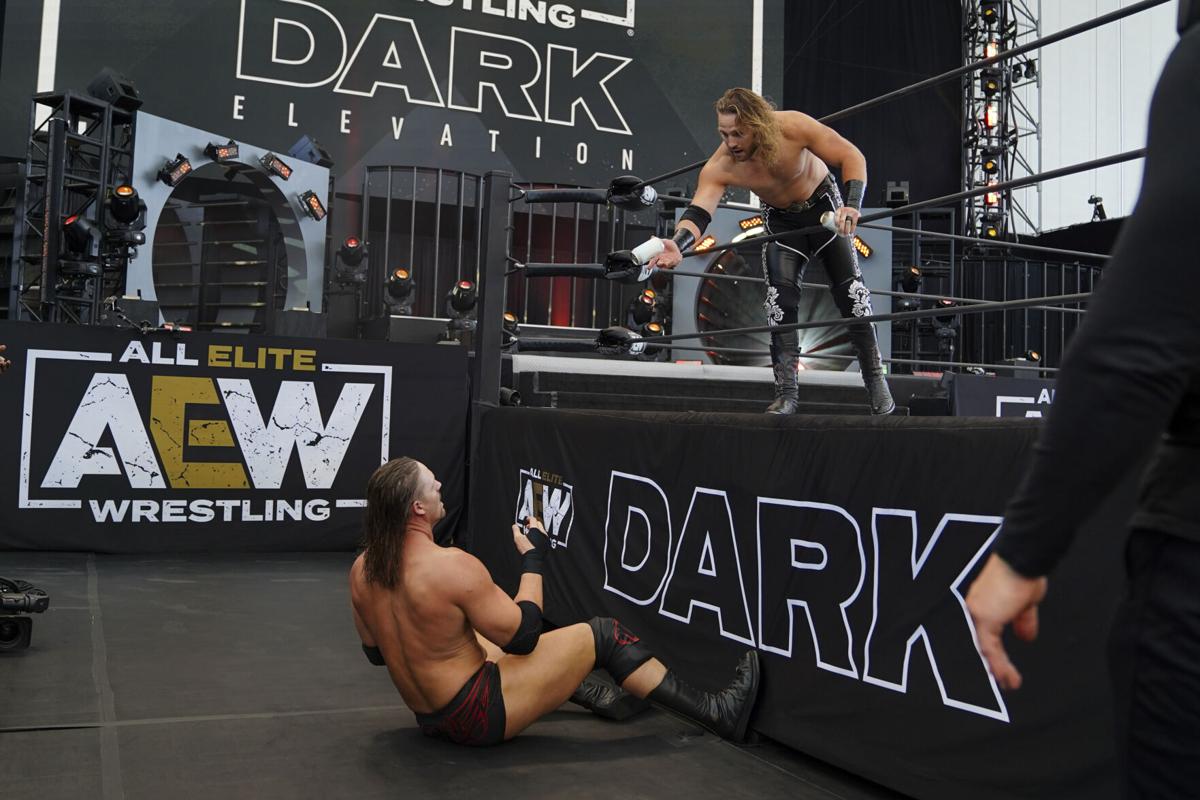 "Hangman" Adam Page (right) offers a beer to Bill Collier following their match in Jacksonville, Florida, on an episode of All Elite Wrestling's "Dark Elevation," which aired on YouTube on April 5, 2021. Collier, a 1998 graduate of Greater Johnstown High School and 15-year veteran of pro wrestling, worked three matches with the promotion against some of the company's most popular stars during a three-day run of tapings. 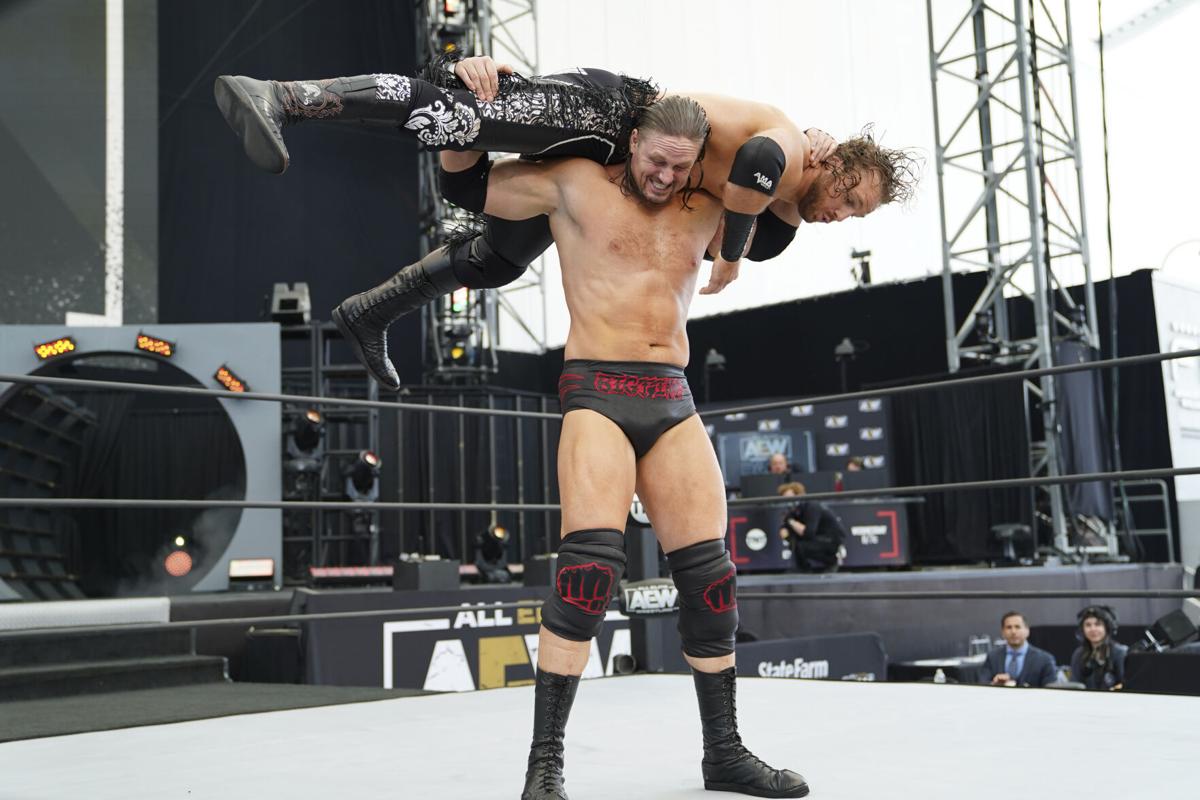 Johnstown native Bill Collier (bottom) hoists “Hangman” Adam Page onto his shoulders during their match in Jacksonville, Florida, on an episode of All Elite Wrestling's "Dark Elevation," which aired on YouTube on April 5, 2021. Collier, a 1998 graduate of Greater Johnstown High School and 15-year veteran of pro wrestling, worked three matches with the promotion against some of the company's most popular stars during a three-day run of tapings.

"Hangman" Adam Page (right) offers a beer to Bill Collier following their match in Jacksonville, Florida, on an episode of All Elite Wrestling's "Dark Elevation," which aired on YouTube on April 5, 2021. Collier, a 1998 graduate of Greater Johnstown High School and 15-year veteran of pro wrestling, worked three matches with the promotion against some of the company's most popular stars during a three-day run of tapings.

Johnstown native Bill Collier (bottom) hoists “Hangman” Adam Page onto his shoulders during their match in Jacksonville, Florida, on an episode of All Elite Wrestling's "Dark Elevation," which aired on YouTube on April 5, 2021. Collier, a 1998 graduate of Greater Johnstown High School and 15-year veteran of pro wrestling, worked three matches with the promotion against some of the company's most popular stars during a three-day run of tapings.

Johnstown native Bill Collier had just tasted defeat on the the April 5 episode of All Elite Wrestling’s “Dark Elevation” series that airs on its YouTube channel.

Collier, a 15-year veteran of the industry on the independent circuit had fallen victim to the "Buckshot Lariat," the well-established finishing strike of his opponent, “Hangman” Adam Page, during a match filmed at Daily’s Place in Jacksonville, Florida.

Page, who has been known to enjoy alcohol as part of his persona, requested two cans of beer from a ring attendant following the match. One was for himself and the other for Collier, as a show of respect.

How did that beer taste?

“It was warm,” Collier said with a chuckle.

That beer may have unintentionally fit a theme of the warmth of which AEW treated its guest during a three-day run of tapings where Collier faced off against some of the company’s brightest stars in matches that were aired on YouTube on March 29, 30 and April 5.

In fact, Page’s toast wasn’t the first on-camera gesture of high regard to Collier from an opponent following a match. On the March 29 episode of “Dark Elevation,” Jon Moxley – the company’s former world champion – patted Collier on the back of his head while releasing his bulldog choke finisher, which earned him a victory through a referee stoppage.

“It was kind of like a nod from both of those guys saying that ‘you did a great job,’ ” Collier said. “To be put in the ring with two of their top singles guys and one of their top factions in three days, in three consecutive matches, it was unbelievable.

"I didn’t know what to expect going in. If you’d have asked me – ‘Who do you suspect that you’ll be wrestling?’ – Jon Moxley and Adam Page would not have been on that list. I want to say that it was a testament to my work the first night, and it was a huge honor to do those matches with those guys."

On the March 30 episode of “Dark,” Collier was on the losing side of a six-man match against three members of the popular faction The Dark Order, but was given a fair amount of offense during his time in the ring. That match was taped first, which Collier explained was a potential springboard to seeing action against two of AEW’s top singles stars later on.

“What happened was that the Moxley match aired first, but the first one that we taped was the six-man tag against the Dark Order,” Collier said. “And when I come out of the ring, I was met at the curtain by Tony Khan (founder, co-owner, president, and CEO of All Elite wrestling) himself, and he seemed to be very impressed by my work. He said: ‘Wow, that was a really good job.’ He asked me a few questions. He was like, ‘That was really good. I was really happy with that.’

“I have a few friends that are under contract with AEW, and they said: ‘This is pretty good. You might get a really good match tomorrow night.’

“Tomorrow night came, and I was wrestling arguably one of the top-five most recognizable active stars in the business today in Jon Moxley. He’s probably the face of AEW.”

Collier, a 1998 Greater Johnstown High School graduate who currently resides in Niagara Falls, New York, has made a name for himself through independent wrestling circles, currently holding singles championships in assorted promotions while trying to get as much time in the ring as he can – even when it means that ring miles and road miles are both adding up fast.

But in a business where most performers work in different professions during the week, maximizing weekends is critical.

“If I could get one (show) a weekend, that would be great,” Collier said. “Sometimes it’s one. Sometimes it’s two. Sometimes it’s three. I’ve had times where I’ve gone from Baltimore to Toronto in a one-day span. Saturday night I’m in Baltimore, Sunday I’m in Toronto. And that’s quite a drive to make. You’re not sleeping. You’re not eating well. Then turn around from Toronto to drive home that Sunday and you have to go to work Monday.

“It’s a tough schedule. But I try to get something at least every weekend.”

At 6-foot-5 and 255 pounds, Collier has a prototypical look for a professional wrestler. But even the look wasn’t enough to get him off the ground during his early career, despite a very quick turnaround from his first training session to live action.

“The first training school that I went to, I did a few things – I ran the ropes, I took a few bumps, took a few moves and did a few, and these guys were ready to throw me in the ring,” Collier said. “One of them said: ‘Our next event is in six weeks, and you’re on it.’ I thought: ‘Well, I guess I know how to do this wrestling thing.’

"My current trainer, Ken Downs, was on the event and he says: ‘Look, you’re a big guy. You look great. You move around great. But you need trained. Trained right. You need to come see me.’ ”

In working with Downs, Collier said that he was able to see what is needed to continuously improve in an environment where evolution is as important as clean, consistent work.

“Wrestling is one of those things – if you’ve heard it once, you’ve heard it a thousand times – you never stop learning,” Collier said. "It’s every time out, you learn something new."

While in a state of constant learning, which Collier said is aided by keeping up with wrestling happenings through online and streaming media, the ability to manage time away from wrestling is just as important as a perfectly executed maneuver in the ring.

“I have to find the balance between the proper diet, balancing my job, coming home and being a father and a husband,” said Collier, who works as a heavy machinery operator at a freight shipping company and still trains in Altoona.

“I have to find time to work out. And then travel on the weekends while doing all of this. It’s a real tough gig. People don’t realize what a tough gig being an indie wrestler actually is.”

Collier’s home life is also important to his ring aesthetic as his fiancee, Kristine Mease, is responsible for designing his ring gear, including what he wore during his trip to AEW.

Collier and Mease have a daughter who is nearly eight months old.

With hundreds of matches on his decorated resume, Collier has carved a reputation in the industry – but hadn’t had much of a chance to show his skills in the bigger ponds of the sport. Getting the call from AEW, along with the bouts he worked once there, provided a lesson.

“It’s never too late is what I learned here,” Collier said “I’ve been doing this for 15 years, and it would appear that I had all but given up hope. But going to AEW and getting the matches that I did and feeling the way that it did, I learned that if you don’t give up and keep grinding at this that something can happen.

“I’m looking forward to working with AEW in the future again, obviously.”

The stop in Jacksonville also gave Collier time to reunite with some friends who are under contract in AEW – such as tag-team partners The Butcher and The Blade, Sonny Kiss, Wardlow, and Dr. Britt Baker, D.M.D., a graduate of Punxsutawney Area High School.

All of them appear regularly on AEW’s flagship show “Dynamite,” which airs at 8 p.m. on Wednesdays on TNT.

In fact, Collier had bumped into Wardlow and Baker and managed to keep his eventual appearance in AEW secret.

“I saw the two of them the weekend before I was going down to AEW and never mentioned a word to them,” Collier said. “I just showed up. I didn’t want to tell them that I was coming down. I didn’t want someone to say: ‘Hey, look at this guy. You need to look at this guy.’ I didn’t want that pressure. I just wanted to show up and do what I do and see where it took me. Britt and Wardlow were pretty excited to see me.”

If a return trip to AEW is in the cards, Collier’s wish list for potential opposition is wide open.

“They pretty much threw two of the top guys at me right away,” Collier said. “The list of guys I’d want to work with would be just about anybody, but I wouldn’t mind working with some of the guys there that I know. Butcher and the Blade. Sonny Kiss, even, because I’ve had matches with Sonny Kiss on the indies. I think that would be fantastic. Wardlow would be a fantastic match.

“Anyone that they have really would be fantastic.”

As Brittany Force, Johnstown resident Brandy Way has wrestled in rings throughout the northeast and midway and has even logged a pair of short…