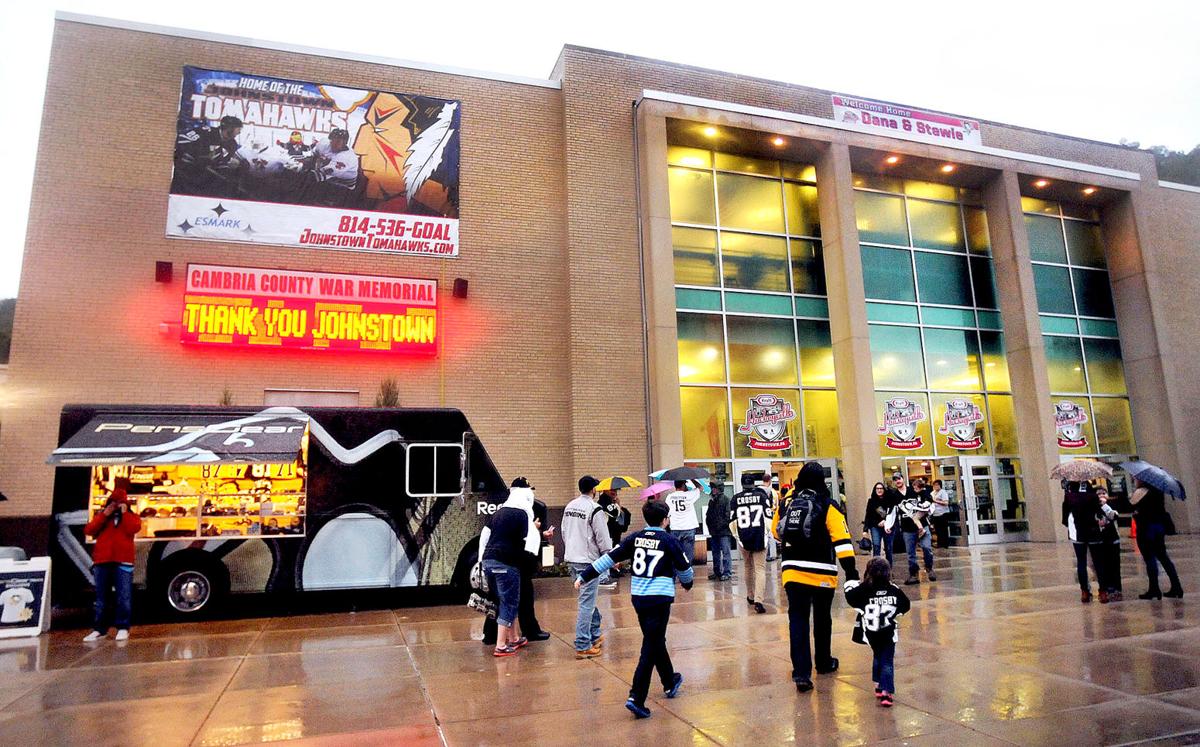 Fans make their way to Cambria County War Memorial Arena for the Kraft Hockeyville USA game between the Pittsburgh Penguins and Tampa Bay Lightning on Sept. 29, 2015. 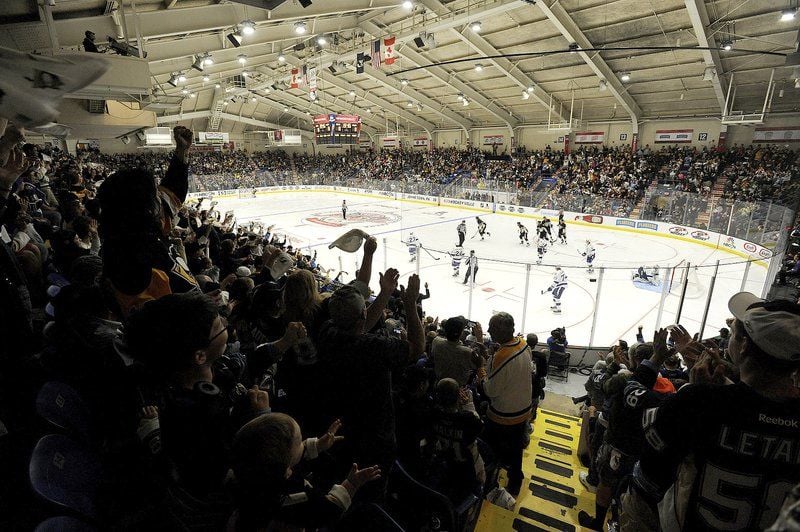 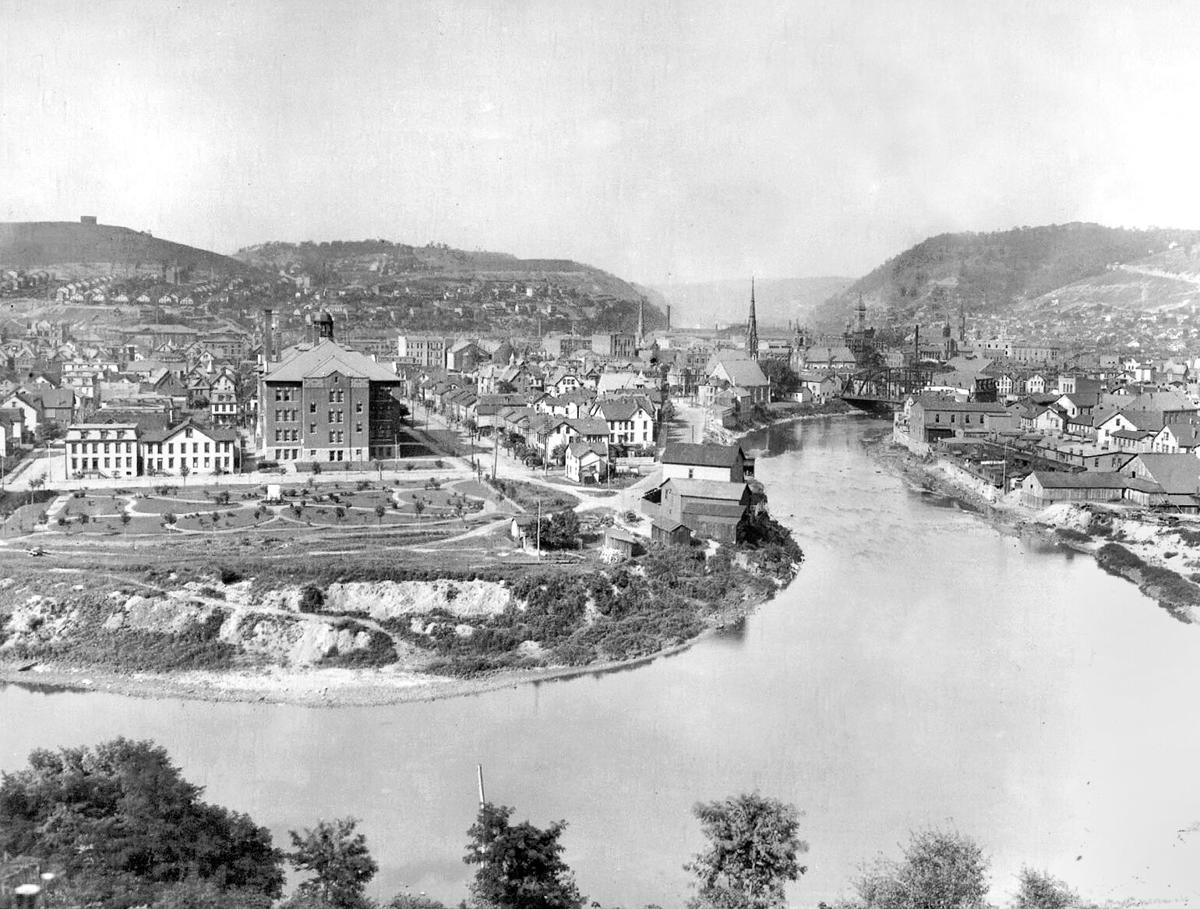 The future site of the Cambria County War Memorial is shown in this undated photo. 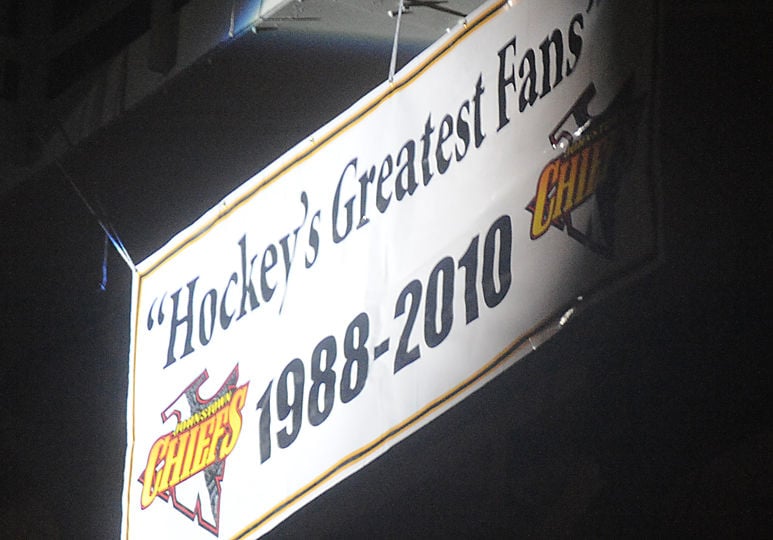 A banner thanking fans is on display during the Johnstown Chiefs’ final home game at Cambria County War Memorial Arena on April 3, 2010. 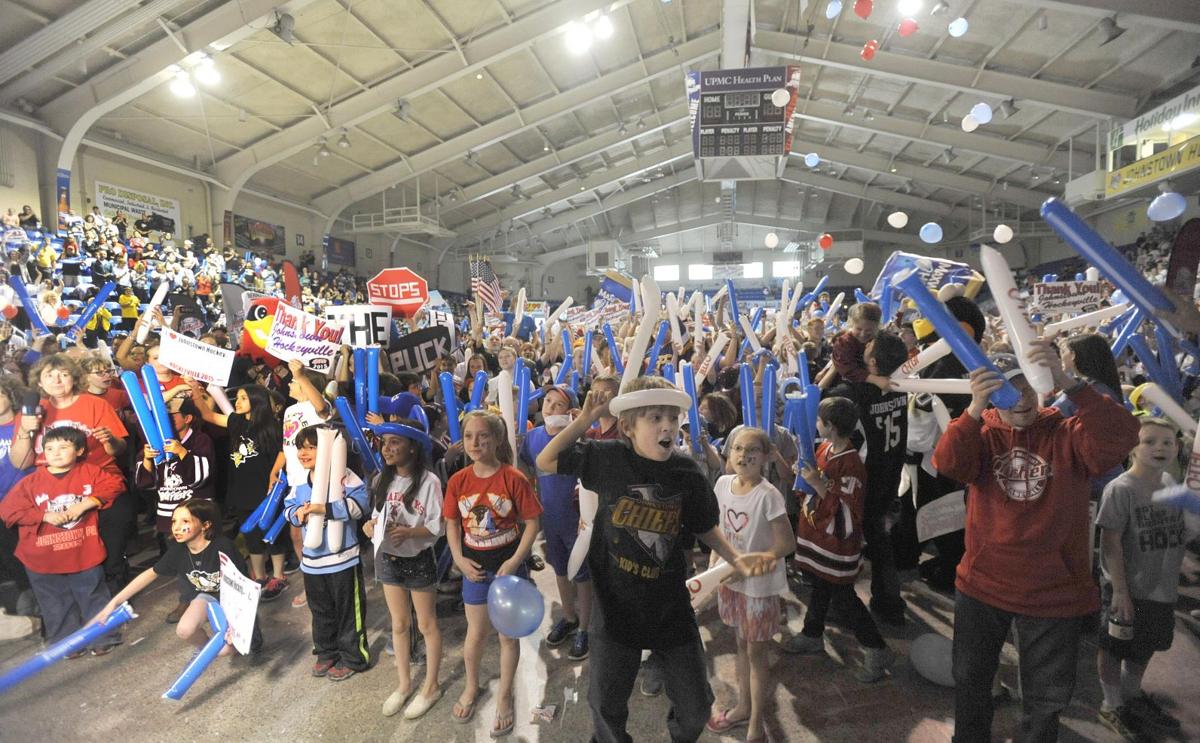 Johnstown hockey fans react to the announcement that Johnstown is the Kraft Hockeyville USA winner Saturday, May 2, 2015, at the Cambria County War Memorial Arena.

Fans make their way to Cambria County War Memorial Arena for the Kraft Hockeyville USA game between the Pittsburgh Penguins and Tampa Bay Lightning on Sept. 29, 2015.

The future site of the Cambria County War Memorial is shown in this undated photo.

A banner thanking fans is on display during the Johnstown Chiefs’ final home game at Cambria County War Memorial Arena on April 3, 2010.

Johnstown hockey fans react to the announcement that Johnstown is the Kraft Hockeyville USA winner Saturday, May 2, 2015, at the Cambria County War Memorial Arena.

In November 1953, The Tribune-Democrat published a special newspaper commemorating 100 years of recreation in the Johnstown region.

“A new business for Johnstown, a civic-minded arena, a living memorial to those of Cambria County who risked and gave their lives in defense of this nation – that is Cambria County War Memorial Arena.”

Times have changed, and so have the city and county in which the nearly 4,000-seat arena sits alongside the Stonycreek River. Still, during its 70-year existence, the War Memorial has filled the roles cited in the 1953 article as well as many others.

From the first Ice Capades show in 1950 through professional hockey seasons involving the Johnstown Jets, Wings, Red Wings and Chiefs to the North American Hockey League Tomahawks at the Tier II Junior A level, the arena has had many unforgettable moments on ice.

One of the most prominent milestones unfolded on

The event was part of the prize for Johnstown and the War Memorial winning the inaugural Kraft Hockeyville USA contest.

Hockeyville brought with it much-needed renovations to the arena, which still have an impact five years later.

The Tomahawks will open the home portion of their ninth NAHL season on Friday night.

The fanfare and hoopla won’t be quite the same as the atmosphere at past openers because of the COVID-19 pandemic and guidelines implemented to prevent the spread of coronavirus.

As many as 1,005 participants and fans may attend games this season under the current guidelines, and social distancing and mask-wearing will be part of the game-night routine now.

July 9, 1945: A vote leads to the adoption of a motion to have a civic auditorium as a War Memorial of Greater Johnstown. Until this meeting, a proposal supporting a library as the memorial had been favored by the majority of the member organizations.

March 1946: The corporation name is changed to Cambria County War Memorial Inc. so that residents of Cambria County outside of Greater Johnstown may be included.

April 25, 1947: A general campaign to raise $750,000 for the War Memorial building surpasses the target dollar amount with $754,158 in pledges. The former Fort Stanwix Hotel serves as headquarters for the campaign.

February 10, 1949: Cambria County Court files an order which clears the way for the War Memorial to obtain land at the present arena site.

October 31, 1949: A ground-breaking ceremony is held at the site where the Cambria County War Memorial Arena is to be built. The organization’s president, Charles W. Kunkle Jr. “thrust a shovel blade into the ground to climax a short but symbolic ceremony held under threatening skies,” The Tribune-Democrat reports.

December 5, 1949: A resolution authorizing the organization of the Cambria County War Memorial Authority is passed. The authority is formed for the purpose “of acquiring, holding, constructing, improving, maintaining, operating, owning or leasing upon a revenue producing basis, a building.”

February 6, 1950: A second financial campaign to raise $200,000 is started to complete the financing for the arena’s construction.

May 19, 1950: As part of Armed Forces Day in Johnstown, the arena’s cornerstone is put in place. Lt. John J. Tominac and Capt. Edward Silk, Cambria County’s two Congressional Medal of Honor winners, lay the cornerstone. A copper box containing documents related to the building and including the names of city and county officials, is sealed into the cornerstone.

May 19, 1950: On the same day as the cornerstone ceremony, the Eastern Hockey League formally accepts Johnstown as a member during a meeting in Detroit. Wally Kilrea, former Detroit Red Wings standout, is signed as first coach of the hockey team. Paul V. Brown of Boston is named from a field of 29 candidates to be manager of the new War Memorial.

October 16, 1950: A crowd of more than 5,000 people attends the arena’s premiere event, an Ice Capades performance.

February 1951: An arena fact sheet provided to The Tribune-Democrat lists the cost of the completed War Memorial construction as $1.5 million.

April 12, 1953: The Jets beat the Springfield Indians 2-0 in front of 2,273 fans at the War Memorial and claim the Atlantic City Boardwalk Trophy as playoff champs.

March 24, 1962: Player-coach Steve Brklacich’s Jets pound Greensboro 6-1 in front of 2,726 at the arena. Johnstown’s only home win in the title series is followed by three consecutive victories at Greensboro. The Jets win their third straight Atlantic City Boardwalk Trophy.

September 25, 1963: The NHL’s Detroit Red Wings and American Hockey League’s Pittsburgh Hornets play an exhibition game as a result of each club’s close ties to the Johnstown Jets organization. Hall of Famer Gordie Howe scores three goals and has two assists in an 8-1 Red Wings victory. The legendary Howe even played goaltender in the final minute in relief of another Hall of Famer, Terry Sawchuk.

May 1, 1975: The Jets complete a championship series sweep over the Binghamton Broome Dusters with a 6-2 win as 4,088 fans attend. Johnstown wins the NAHL Lockhart Cup Trophy. Captain Galen Head and veteran Vern Campigotto skate around the arena holding the trophy as fans celebrate on the ice and in the stands.

March 22 to June 9, 1976: The Paul Newman motion picture “Slap Shot” is filmed at the War Memorial and throughout the Johnstown region. The Universal movie is based on the 1974-75 Johnstown Jets season and features many Jets players, including the bespectacled movie Hanson Brothers – Steve and Jeff Carlson and Dave Hanson.

July 19-20, 1977: The third Johnstown Flood devastates the city, including major damage to the War Memorial Arena. The Johnstown Jets do not play the 1977-78 season.

November 3, 1978: The Johnstown Wings fill the void left by the Jets departure and play the New Hampshire Freedoms, bringing the pro game back after a one-year absence. The Wings lose 7-2 in front of 2,866 fans.

March 22, 1980: The Johnstown Red Wings lose 5-4 in overtime to the Baltimore Clippers as 2,982 fans attend the final home game in the city franchise’s existence. Pro hockey would not return to Johnstown for eight years.

September 17, 1983: Hockey Hall of Famer Steve Yzerman, former vice president and general manager of the Tampa Bay Lightning, appears in his first NHL exhibition game at the War Memorial when his Detroit Red Wings and Pittsburgh Penguins® face off. Yzerman has an assist as Detroit captures a 6-4 victory in front of 1,896 fans.

October 4, 1984: Mario Lemieux, current Pittsburgh Penguins owner, plays in a preseason game in front of slightly more than 1,800 fans at the War Memorial as a rookie, netting a goal and an assist in Pittsburgh’s 5-0 preseason win over the Detroit Red Wings.

April 12, 1989: The Carolina Thunderbirds defeat the Chiefs 7-4 in Game 7 of the East Coast Hockey League championship series in front of 4,146 fans who began lining up to purchase tickets the previous night.

March 17, 1993: Defenseman Jeff Ricciardi scores in overtime as the Chiefs beat the Richmond Renegades in a wildcard playoff game in front of 1,938 fans.

April 7, 2000: The Chiefs defeat the Roanoke Express 4-0 in Game 3 of an ECHL playoff series as 2,194 fans watch. The team had missed the postseason four straight years, but the Chiefs later clinched the series in Game 4 at Roanoke.

April 5-6, 2002: The Chiefs win back-to-back home playoff games over the Peoria Rivermen to even the best-of-5 series at 2-all. Johnstown returns to Peoria and wins Game 5 and the series, fulfilling coach Scott Allen’s promise that the Chiefs would overcome a 2-0 deficit.

February 17, 2004: Chiefs goaltender Arturs Irbe, a former NHL star, is in net for a 5-4 win over Peoria, his 10th victory of the season with Johnstown. The NHL’s Carolina Hurricanes recall Irbe after the game.

April 3, 2010: The Johnstown Chiefs era ends with a 5-3 loss to the Elmira Jackals as a sellout crowd of 4,017 says good-bye. The team would relocate to Greenville, South Carolina, the following ECHL season.

May 2, 2015: The War Memorial rocks as thousands of fans celebrate Johnstown and the arena’s win in the inaugural Kraft Hockeyville USA contest. The announcement is made live on NBC Sports.

February 25, 2017: Johnstown celebrates the 40th anniversary of the movie “Slap Shot” with a Boys are Back in Town weekend organized by Hanson Brother and former Chiefs coach Steve Carlson and his wife, Vicki. The event includes a Heritage NAHL game between the Tomahawks and Wilkes-Barre/Scranton Knights as well as a “Slap Shot” reunion game featuring the Hanson Brothers, Allan Nicholls (Johnny Upton in the movie), Jerry Houser (“Killer” Carlson), Guido Tenesi (Billy Charlebois) and Yvon Barrette (Denis Lemieux). A screening of “Slap Shot” is held at the Westwood Plaza Theatre, which had featured the movie’s local premiere exactly 40 years earlier.

October 9, 2018: The Westmont Hilltop High School hockey program retires the No. 30 jersey worn by former Hilltoppers goaltender Dana Heinze during a ceremony before a PIHL game against Kiski. Heinze is honored for his role as head equipment manager with the Pittsburgh Penguins. He was part of four Stanley Cup championship teams, three in Pittsburgh and one in Tampa Bay. Westmont beat Kiski 3-1. Heinze joins an elite club that includes Johnstown professional hockey greats whose numbers are retired: Don Hall (9), Dick Roberge (11), Galen Head (8) and Reg Kent (7).

October 13 to December 2, 2018: The Johnstown Tomahawks win a franchise-record 17 consecutive games during a 47-9-4 season with a club-record 98 points. The Tomahawks advance to the Robertson Cup semifinal round.

September 27, 2019: The Johnstown Tomahawks unveil the banners the franchise earned during the record-breaking 2018-19 season. The banners recognizing the Tomahawks as 2018-19 East Division regular-season and division playoff champions and NAHL regular-season champions are hung on the wall above Sections 14 and 15.

March 3, 2020: The Tomahawks beat the Maine Nordiques 6-3 in what would be the final home game of the COVID-19 pandemic interrupted NAHL season. Second-place Johnstown won two more road games and was on an eight-game winning streak when play was suspended on March 12. Later, the remainder of the regular season and playoffs were cancelled.

October 16, 2020: The Tomahawks are set to host the Maine Nordiques in the home opener of the 2020-21 season, which was delayed by the COVID-19 pandemic. Coach Mike Letizia’s team will bring a 1-0-1 record into the game as 1,005 people are permitted to be at 1st Summit Arena based on state guidelines.

The Johnstown Tomahawks fell to the Maryland Black Bears 4-3 in overtime in a rare Monday morning game.