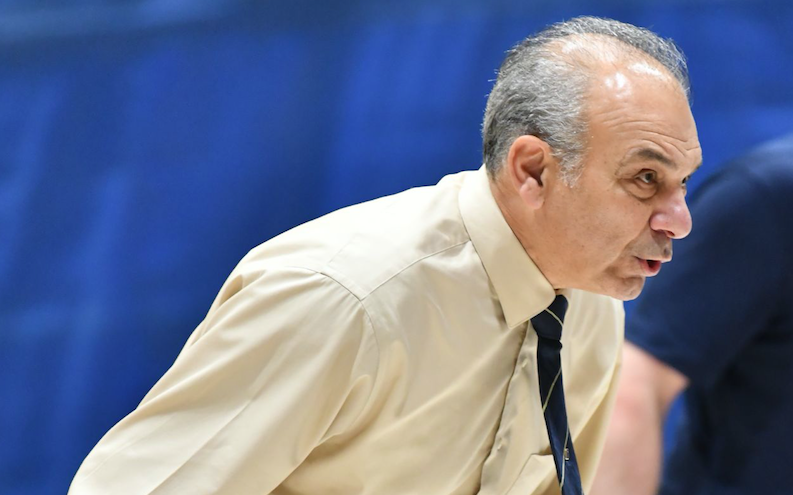 Pitt-Johnstown coach Pat Pecora is shown during a PSAC wrestling match against Seton Hill on Jan. 25, 2019, at the Sports Center. 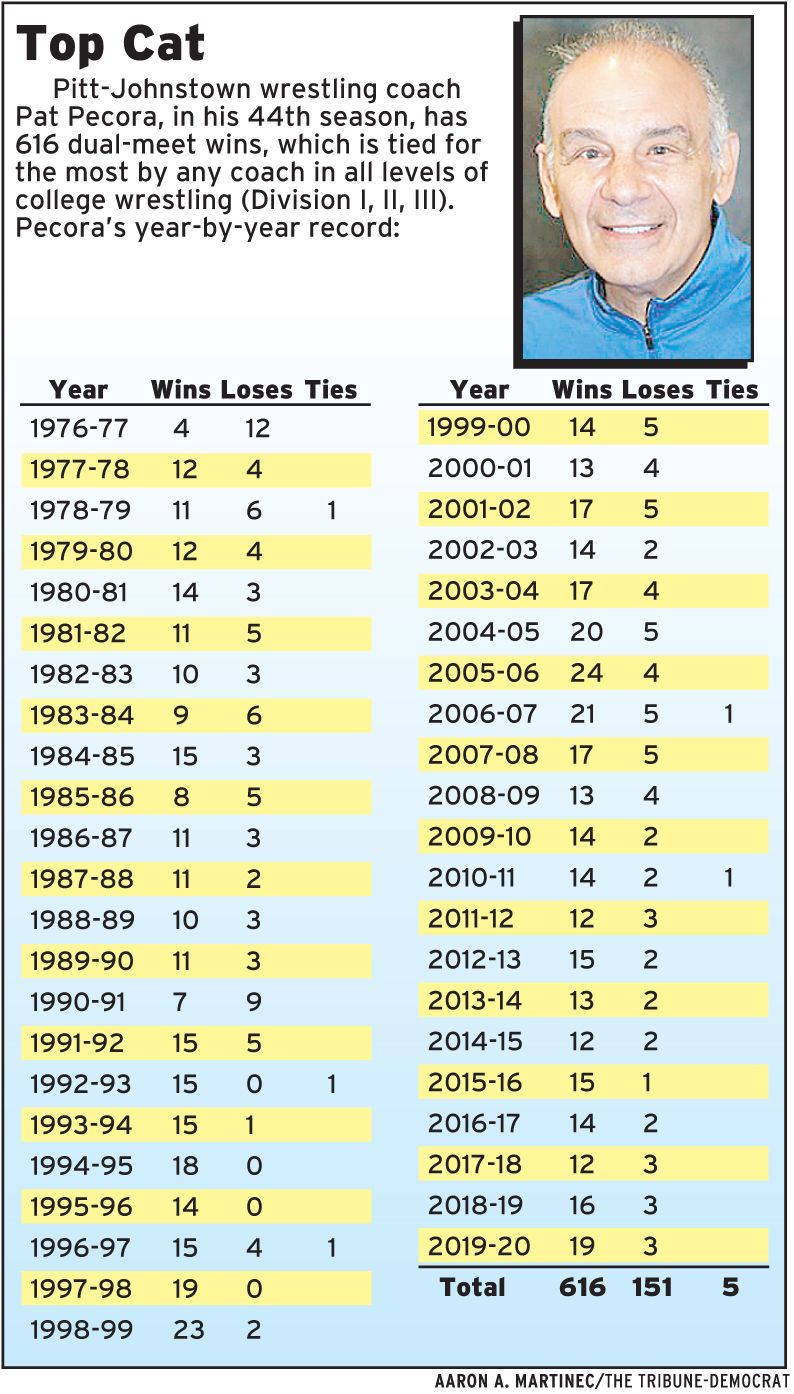 A look at Pitt-Johnstown wrestling coach Pat Pecora's impressive win-loss record by season throughout his career.

Pitt-Johnstown coach Pat Pecora is shown during a PSAC wrestling match against Seton Hill on Jan. 25, 2019, at the Sports Center.

A look at Pitt-Johnstown wrestling coach Pat Pecora's impressive win-loss record by season throughout his career.

Sean Isgan recalled a victory orchestrated by his college coach, Pat Pecora, that didn’t appear in the won-loss column but meant everything to a young wrestler.

“My senior year, when we’re wrestling at the national championships, I make it to the semifinals. I’m all excited. I’m an All-American,” said Isgan, a Somerset native who was a national runner-up heavyweight at Pitt-Johnstown in 1981. “But we forget to weigh in. What’s the big deal, right? The coach of the kid I was going to wrestle made a big deal of it.”

Isgan said by rule he could have been forced to forfeit that historic bout at the national tournament.

“Pat took the coach into the hallway very quietly and said, ‘This kid worked his whole life for this,’ ” recalled Isgan, now president of an engineering firm in Somerset. “ ‘If you’re going to stick with this ...’ ”

Isgan chuckled. “You can’t print the rest,” he said of Pecora’s persuasive negotiation.

While that figurative win in the hallway at the University of California-Davis in 1981 didn’t count toward Pecora’s career dual-meets record, plenty of other victories have been tallied – 616, in fact.

In his 44th season at Pitt-Johnstown, Pecora enters Friday night’s dual meet against Mercyhurst University at the Sports Center (7 p.m.) with an opportunity to become the all-time wins leader in college wrestling at any level.

“I don’t think you realize it when you’re there until you step back a few years and you see, one, Pat is the ultimate motivator,” Isgan said. “But he does it because he genuinely cares about every single kid on that team. It’s evident. The kids feel it. He will go to the wall for you.”

Greater Johnstown graduate Carlton Haselrig won six national titles while wrestling for Pecora and went on to a Pro Bowl career as a lineman with the NFL’s Pittsburgh Steelers. Haselrig won three titles apiece in NCAA Division I and II, leading to the so-called “Haselrig rule,” which prohibits Division II wrestlers from competing in the Division I championship tournament.

“Without Coach Pecora, I don’t know if I would have been able to do anything,” Haselrig said. “A great man.

“Some of the main lessons he taught me about wrestling were: always hold in there, be tough, be strong, be in shape. He believed in you being in great condition. That was one of his main things.”

Haselrig had a string of 122 matches without a loss during a 143-2-1 career. He never lost or tied against a Division II opponent. He attributes much of that success to Pecora’s guidance.

“His main thing is just being a consistent person, a consistent man. It’s daily,” Haselrig said. “(The success) is because of his consistency. I learned the same deal from Chuck Noll and Bill Cowher. You’ve got to be consistent. No matter what, stay even-keeled.”

‘For this many years’

“His wins are very impressive, but his loyalty to UPJ and the Johnstown area are what make it so special,” Strittmatter said of his former coach.

Pecora nearly was wooed away from the Richland Township campus 17 years ago. The University of Maryland offered him the head coaching position at the NCAA Division I program in April 2003.

At that point in his UPJ career, Pecora had a 348-99-3 mark. He had led two teams to national titles while coaching seven individual national champions and compiling 25 winning records in his first 27 seasons.

It seemed as if Pecora would sign on for his dream job at the next level. But his commitment to his family, community and wrestling family at Pitt-Johnstown kept him here.

“To see that kind of loyalty to his school, to his community, to his wrestlers – he’s been at one place for this many years,” Strittmatter said. “He’s had opportunities at Division I schools and he made a decision to stay back because of his community and his family.

"In today’s world of everyone going on to the next thing and building their resumes, Coach Pecora is very special.”

'Wanted to build' a program

“When we first got going, we went from the two-year to four-year program and were trying to transition into a conference or NCAA Division II,” Sherlock said. “Everybody was pushing coaches for us to consider. You had all of these guys who were fairly established in different schools and sports. They’d come to UPJ and we didn’t have anything.

“We were in the old Student Union gym,” Sherlock added. “We didn’t have a laundry facility. After several times of bringing in people who were not ready to adapt to what we had and what we didn’t have, I decided to try to find someone who was coming in on the ground floor and wanted to build.”

Pecora had a solid high school career at Serra Catholic and was a four-year starter and three-year all-conference wrestler at West Liberty College (now university). He twice qualified for the NAIA Tournament.

'Going to make it work'

“Pat’s uncle (Frank Cortazzo) was a coach at East Allegheny. He said, ‘My nephew is just out of college. You ought to consider him,’ ” Sherlock said. “We had been wrestling West Liberty and I knew Pat wrestled for them and they had a good program.”

Pitt-Johnstown administrator Bruce Haselrig was the Mountain Cats’ first coach. He was beginning what would become a hall of fame career as an official. Sherlock respected Bruce Haselrig’s opinion.

“Bruce said we ought to look at a couple of these guys from West Liberty,” Sherlock said. "He gave me two names and one of those was Pat’s."

That was enough to persuade Sherlock.

“Two people mentioned Pat's name. Pat came in for an interview and interviewed well," Sherlock said. "We hired him and you could tell right away that he was going to make it work.”

“I never thought that he could get to the level where we were national champions,” Sherlock said. “That didn’t enter my mind back in the 1970s when we hired him. But Title IX was coming into affect and a lot of schools were dropping wrestling. There were a lot of good wrestlers available.

“I took some of the basketball scholarship money and rolled it over into the wrestling program to get him a start. He never wasted any money. Give him a dollar and he’ll make two dollars out of it.”

“Now it’s inevitable,” Sherlock said. “It’s a great honor for UPJ to have the winningest coach of all time.”

What: Pitt-Johnstown coach Pat Pecora is currently tied for the all-time college match wins record at 616.

Fourth-ranked Pitt-Johnstown won the first four bouts, including falls from Jacob Ealy (141 pounds) and Chris Eddins (149) to build a 19-0 lead on its way to a 34-9 PSAC victory at Seton Hill on Saturday night.