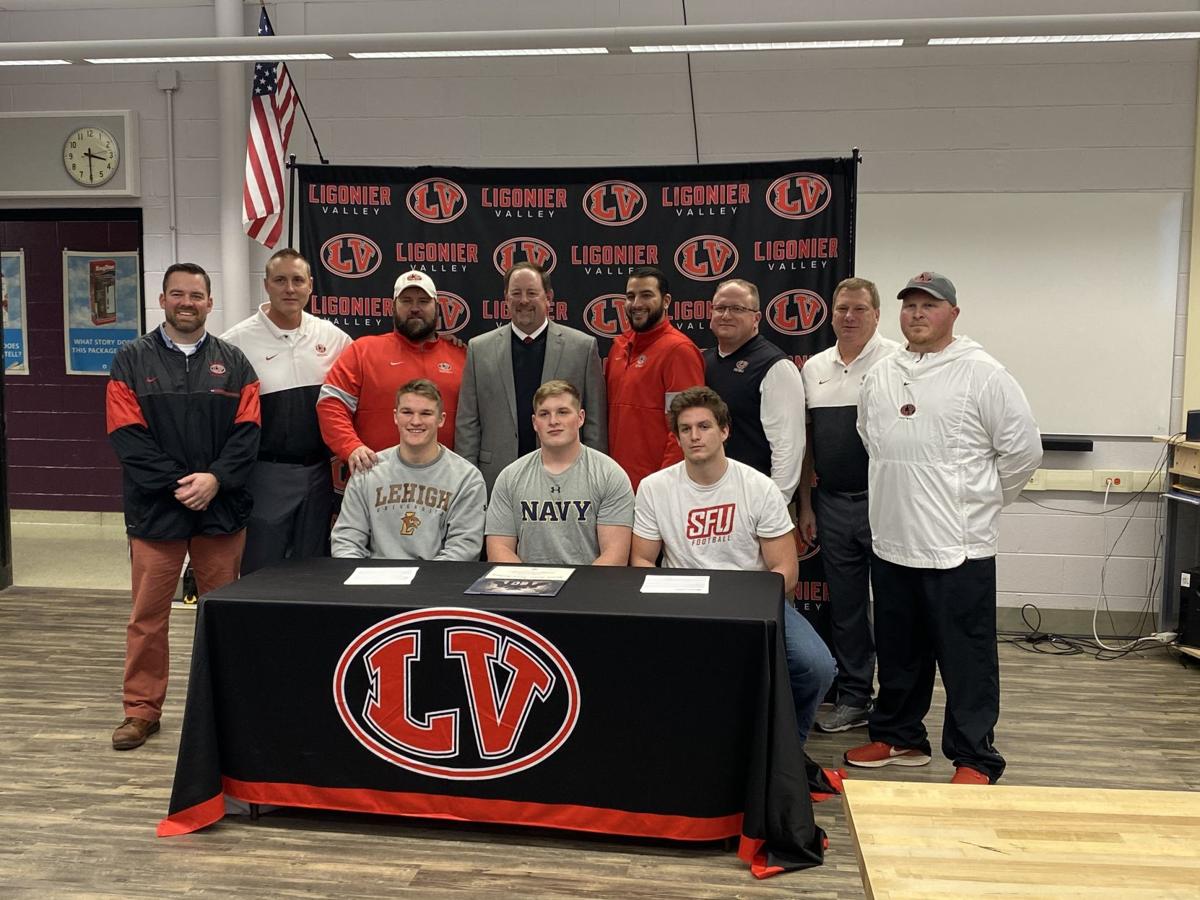 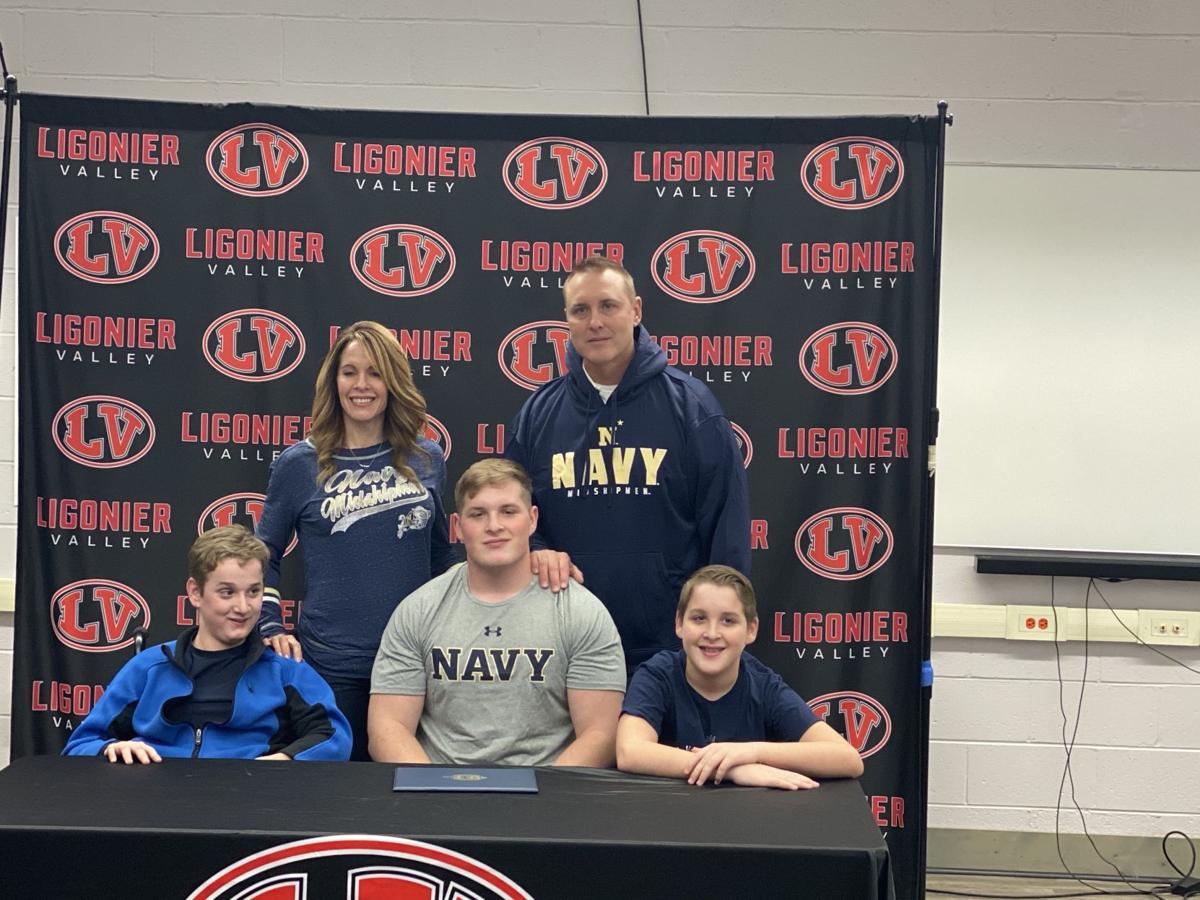 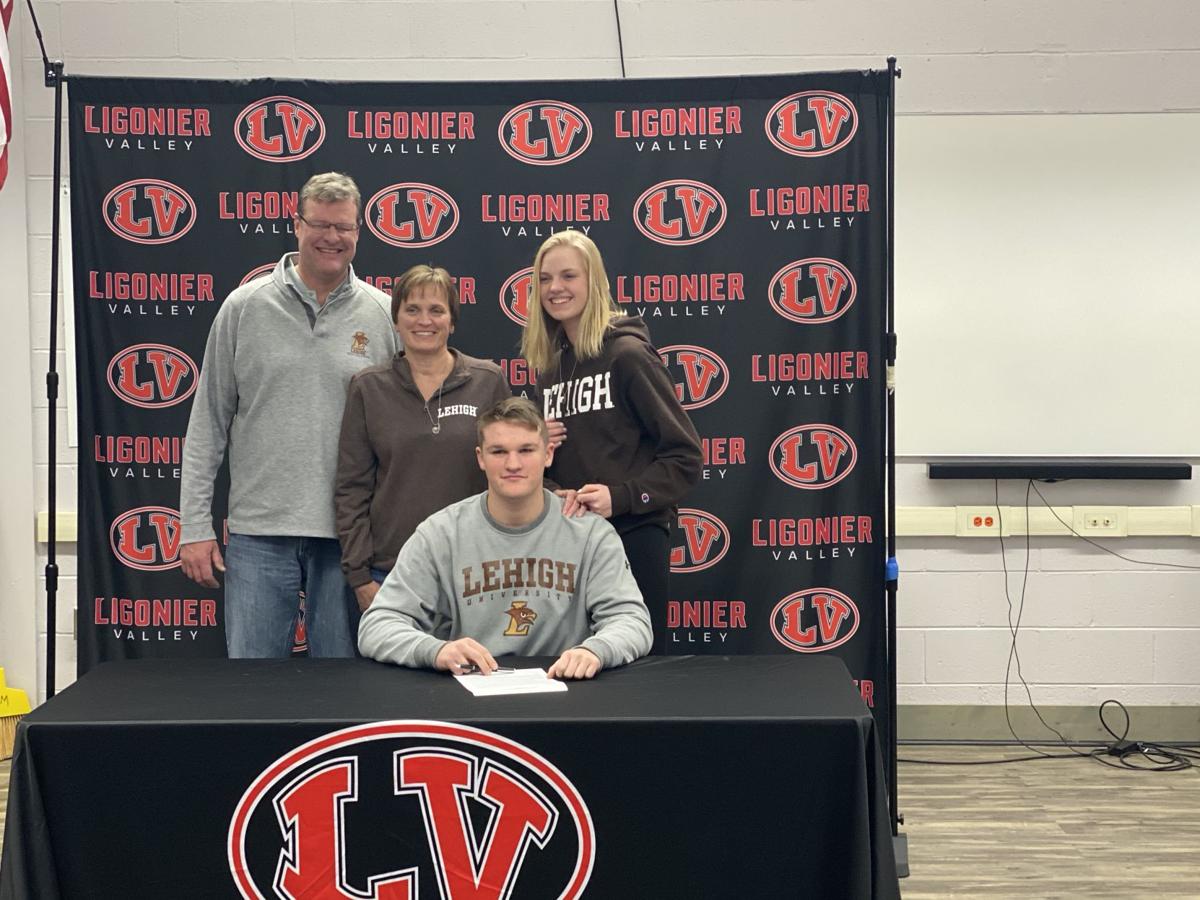 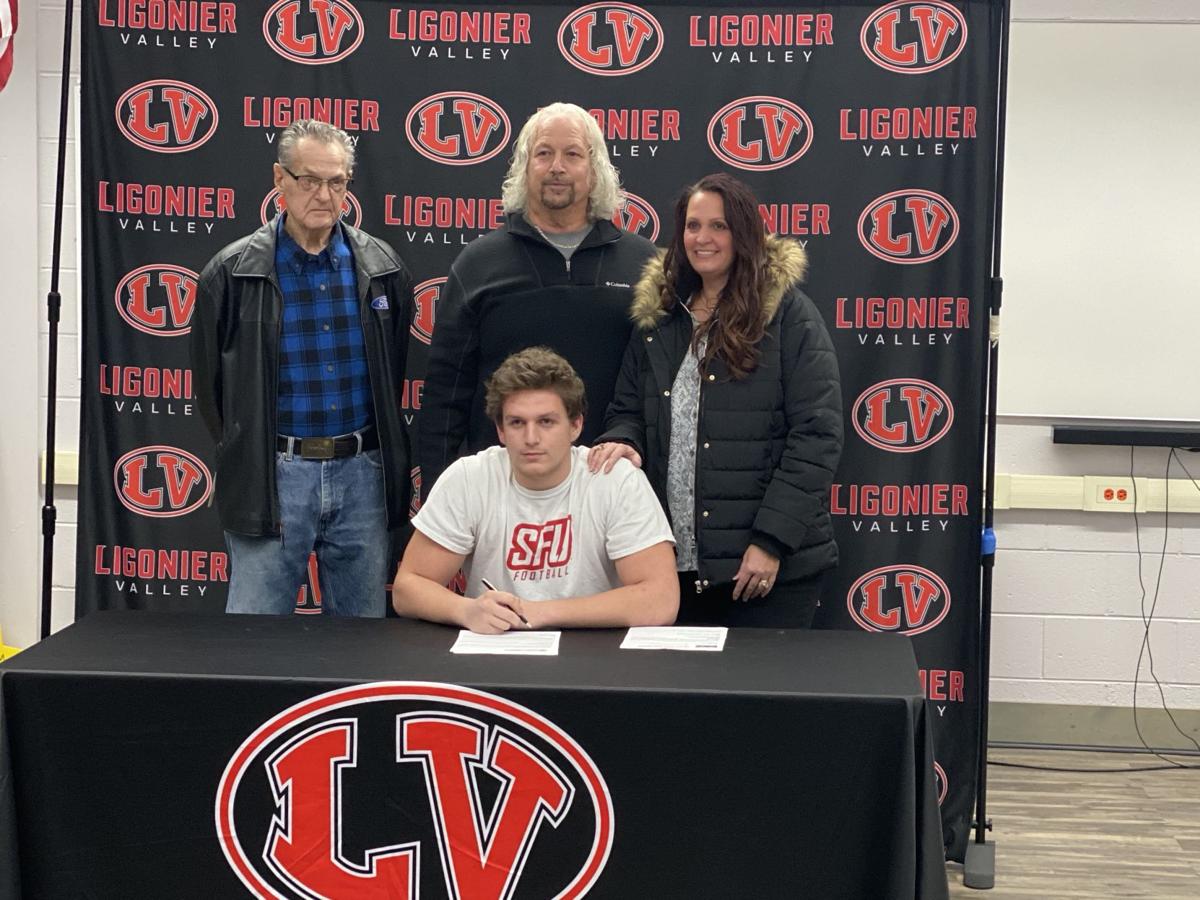 LIGONIER – Three seniors, vital to the success of Ligonier Valley football over the past four seasons made their collegiate intentions official on Wednesday during a ceremony at Ligonier Valley High School.

The trio of classmates – all linemen for the Rams – will continue their careers at Division I programs as Michael Petrof has accepted an appointment at the U.S. Naval Academy while Christian Jablonski and Wylie Spiker signed National Letters of Intent to play at Lehigh and St. Francis, respectively on Wednesday.

The Rams’ Class of 2020 contingent will also graduate as the winningest class in program history, having won 51 games since 2016.

“All three of these guys, they have different stories,” Ligonier Valley coach Roger Beitel said. “Mike is a little bit different. We saw him when he was rolling around on ballfields in sixth grade, that he had the potential to be an outstanding football player. The other two were projects.

“Christian, I had him in Little League, and sometimes he ran around the bases like he was Bambi. He just bought into our process and just developed himself into a fantastic athlete. Same with Wylie. He didn’t come out for football until after ninth grade. So, his first year of football was 10th grade. They’ve all embraced the process and the grind.”

The feat of getting three members of the same graduating class into Division I programs is not lost on the young men putting pen to paper on Wednesday.

“It just shows how great our coaches are,” Jablonski said. “Around here, that’s very unusual to get three players in a four-year span, the fact that we had three players in one year is unbelievable.”

Petrof will join a Navy squad, coached by Ken Niumatalolo and currently preparing to play in the Liberty Bowl in Memphis, Tennessee, on Dec. 31 against Kansas State. The 6-foot-2, 275-pound Petrof, who was a four-year starter and letter winner at Ligonier Valley, was in attendance at this past Saturday’s Army-Navy game in Philadelphia. The Midshipmen topped the Black Knights 31-7 at Lincoln Financial Field.

“There’s nothing like it,” Petrof said of the annual rivalry clash. “A game like that, the atmosphere and what it means.

“Being ‘America’s Game,’ there’s nothing like it. There’s not a lot of games where the players are willing to die for those watching. That meant a lot to me.”

The son of Karl and Anne Petrof of Ligonier, Michael plans on majoring in history while studying in Annapolis. Petrof was a second-team all-state selection as a defensive lineman in 2018 while also named to The Tribune-Democrat’s all-area first team. He collected 227 tackles – 35 for a loss with 15 sacks –  during his time with the Rams.

Now, Petrof is joining two co-captains in taking the next step in their football careers by going into Division I.

“I knew when we all started working together that there was something special going on … ” Petrof said. “I didn’t know it was D-I, but that’s what we were working for. I knew the guys I was working with, they were going to get it done.”

Jablonski’s path saw him initially on the Rams roster as receiver before making the switch to the lines. A two-year starter and three-year letter winner, the 6-5, 260-pounder will link on with a Mountain Hawks program led by Tom Gilmore.

Jablonski, a 2018 first-team member of The Tribune-Democrat’s all-area team, racked up 32 tackles for loss among the 114 that he picked up during his high school career. He’ll plan on majoring in finance while at Lehigh.

“I felt that they’re going to win a lot of championships,” Jablonski said. “I was lucky enough for four years here that we were very successful, and I had the same feeling at Lehigh.”

He is the son of Larry and Denise Jablonski of Ligonier.

Spiker, at 6-3 and 250 pounds, was a two-year starter and two-year letter winner for the Rams while also picking up an honorable mention nod from The Tribune-Democrat’s all-area team in 2018. He’ll join a Red Flash team coached by Chris Villarrial and coming off a 6-6 record in 2019.

“St. Francis was a great fit for me,” Spiker said. “I love the atmosphere. I love the coaching staff. They’re all very welcoming and that was the place that I wanted to call him for the next four years.”

He is the son of Greg and Coleen Spiker of Ligonier, and also planning on majoring in criminal justice while in Loretto.

Spiker can also add “Division I athlete” to his resume. It’s a feeling that started to take grip on Wednesday.

“Now that I just signed, it’s a different feeling,” Spiker said. “It kind of has hit me now.”

Another domino has fallen in Ligonier Valley’s quest to join District 7. On Monday, the WPIAL board of directors voted unanimously to accept Ligonier Valley as a member.

NULL[mdash] George R., 72, of Seanor, PA, beloved husband, father, grandfather and friend went home to be with his Lord and Savior on March 30, 2020. George was born on May 10, 1947 to the late William and Marie Null. He was preceded in death by his sister, Faye Thomas and brother, Boyd Null…