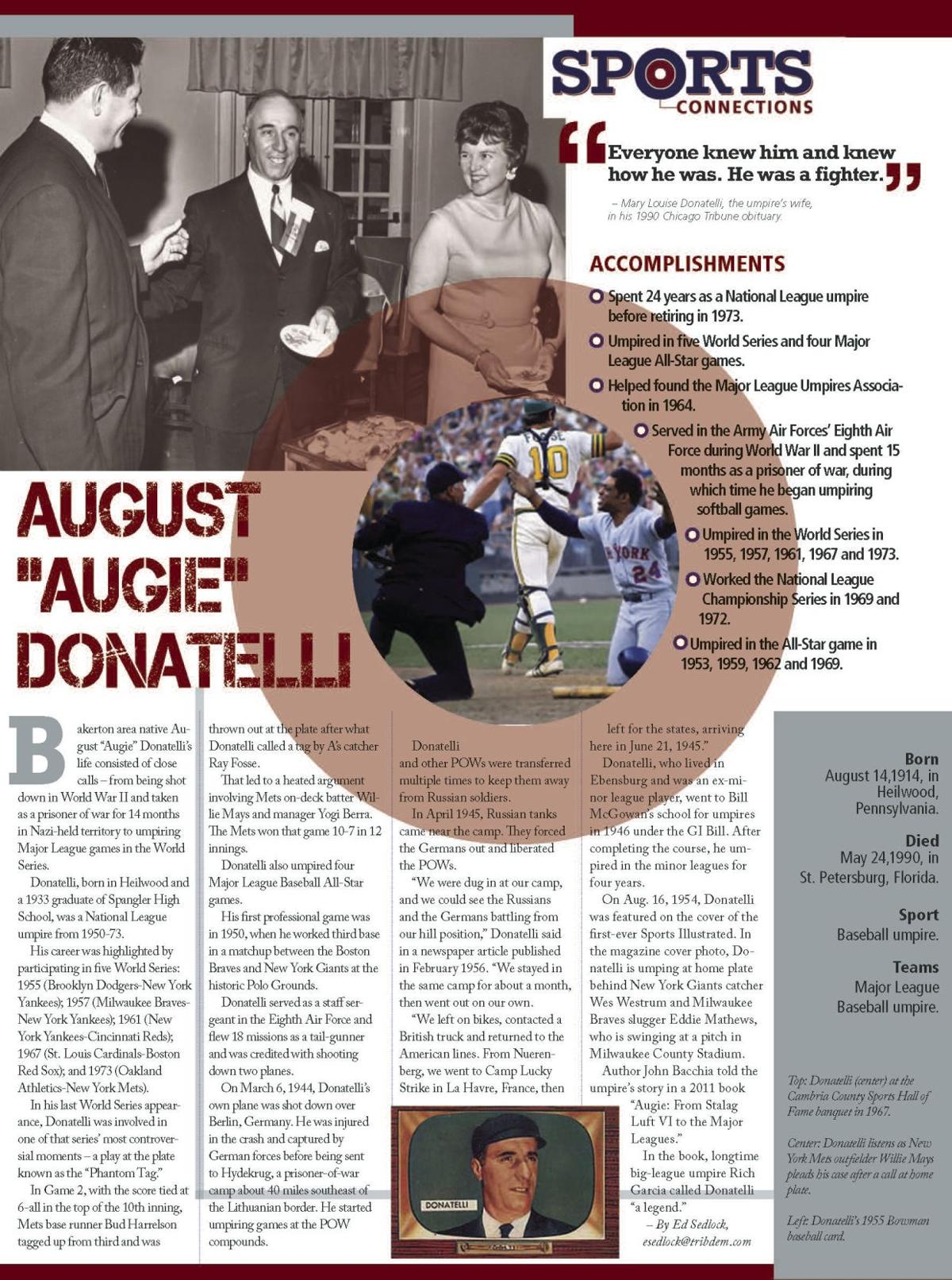 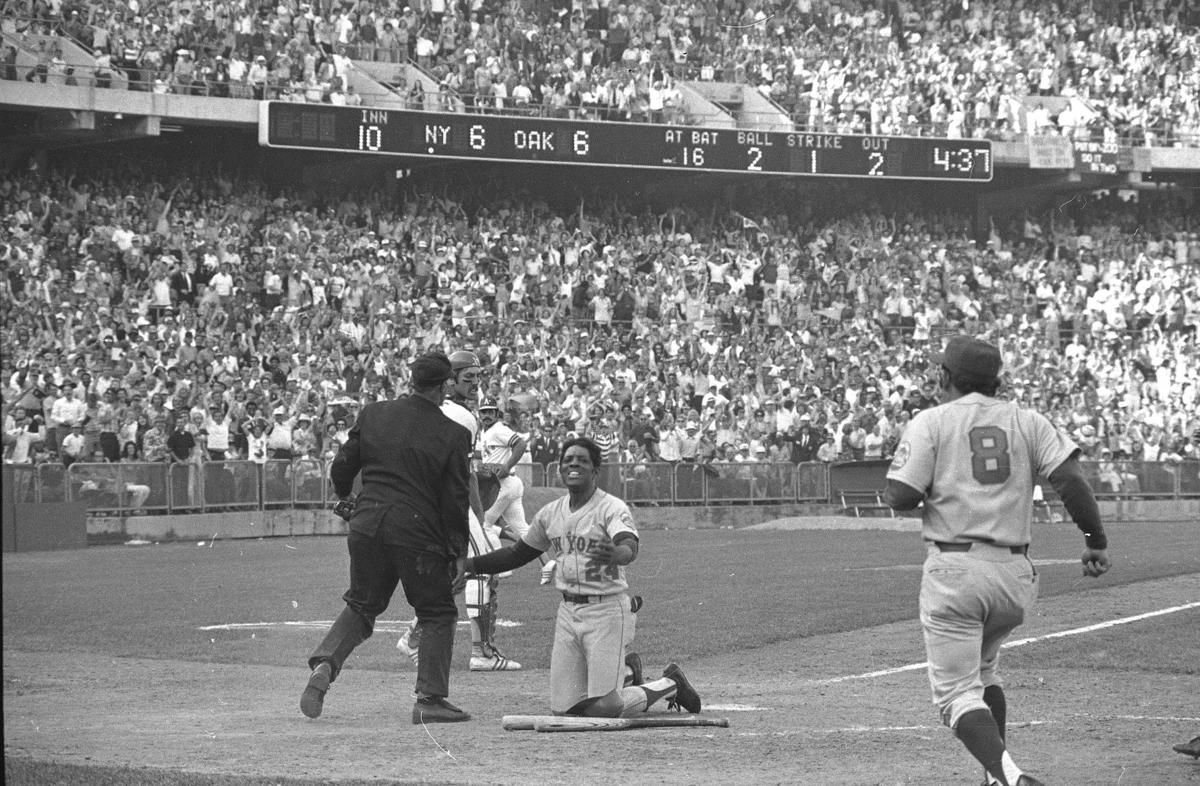 New York Mets' Willie Mays screams on his knees as Mets' manager Yogi Berra (8) runs toward umpire Augie Donatelli following a controversial play at home plate in the 10th inning of the second World Series game against the Oakland A's in Oakland, Calif., Oct. 14, 1973. At right is A's catcher Ray Fosse, who Donatelli ruled tagged Bud Harrelson as he attempted to score from third. 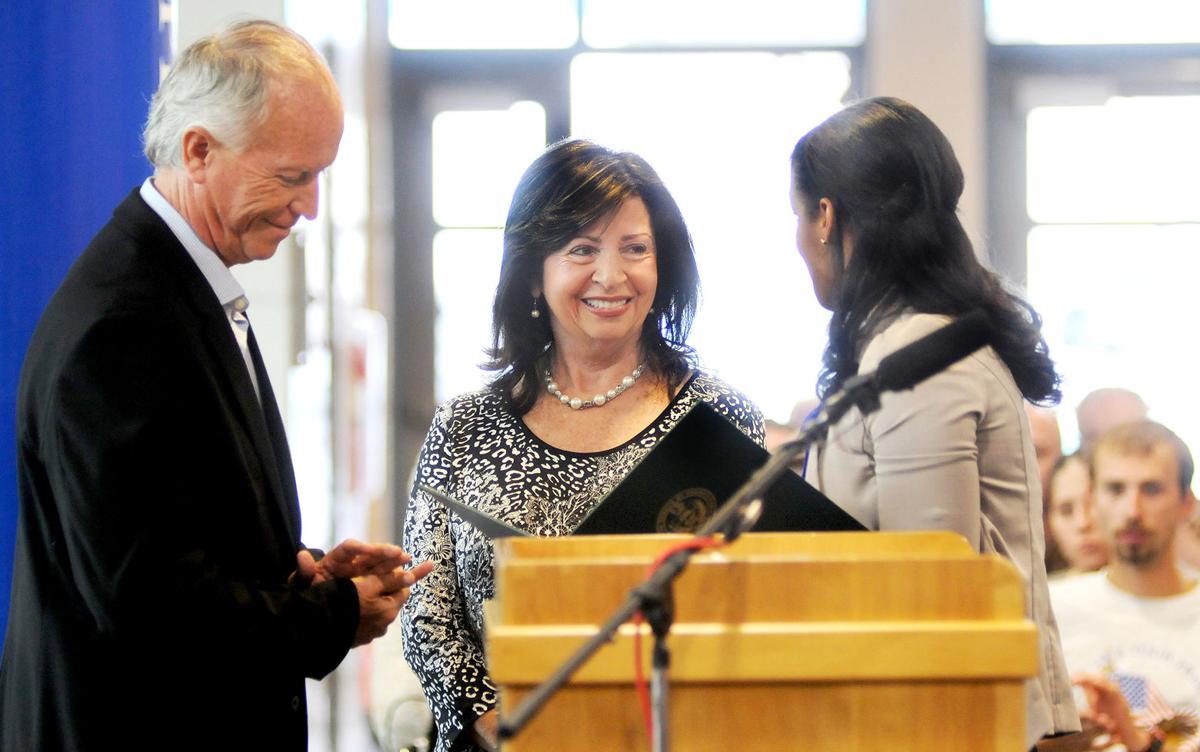 Patrick Donatelli (left) and Carol Donatelli (center) of St. Petersburg, Fla., receive a proclamation from Alanna Wilson, a representative from state Sen. John Wozniak, on behalf of their father, August “Augie” Donatelli, a tail-gunner on a B-17 bomber in World War II who was shot down over Germany and was a POW for 14 months.

New York Mets' Willie Mays screams on his knees as Mets' manager Yogi Berra (8) runs toward umpire Augie Donatelli following a controversial play at home plate in the 10th inning of the second World Series game against the Oakland A's in Oakland, Calif., Oct. 14, 1973. At right is A's catcher Ray Fosse, who Donatelli ruled tagged Bud Harrelson as he attempted to score from third.

Patrick Donatelli (left) and Carol Donatelli (center) of St. Petersburg, Fla., receive a proclamation from Alanna Wilson, a representative from state Sen. John Wozniak, on behalf of their father, August “Augie” Donatelli, a tail-gunner on a B-17 bomber in World War II who was shot down over Germany and was a POW for 14 months.

Bakerton native August "Augie" Donatelli's life consisted of close calls – from being shot down in World War II and taken as a prisoner of war for 14 months in Nazi-held territory to umpiring Major League games in the World Series.

Donatelli, born in Heilwood and a 1933 graduate of Spangler High School, was a National League umpire from 1950-1973.

In his last World Series appearance, Donatelli was involved in one of the that series' most controversial moments – a play at the plate known as the "Phantom Tag."

In Game 2, with the score tied at 6-all in the top of the 10th inning, Mets baserunner Bud Harrelson tagged up from third and was thrown out at the plate after what Donatelli called a tag by A's catcher Ray Fosse.

That led to a heated argument involving Mets on-deck batter Willie Mays and manager Yogi Berra. The Mets won that game 10-7 in 12 innings.

His first professional game was in 1950, when he worked third base in a matchup between the Boston Braves and New York Giants at the historic Polo Grounds.

Donatelli served as a staff sergeant in the Eighth Air Force and flew 18 missions as a tail-gunner. He was credited with shooting down two planes.

On March 6, 1944, Donatelli's own plane was shot down over Berlin, Germany. He was injured in the crash and captured by German forces before being sent to Hydekrug, a prisoner-of-war camp about 40 miles southeast of the Lithuanian border. He started umpiring games at the POW compounds.

Donatelli and other POWs were transferred multiple times to keep them away from Russian soldiers.

In April 1945, Russian tanks came near the camp. They forced the Germans out and liberated the POWs.

"We were dug in at our camp, and we could see the Russians and the Germans battling from our hill position," Donatelli said in a newspaper article published in February 1956. "We stayed in the same camp for about a month, then went out on our own.

"We left on bikes, contacted a British truck and returned to the American lines. From Nuerenberg, we went to Camp Lucky Strike in La Havre, France, then left for the states, arriving here in June 21, 1945."

Donatelli, who lived in Ebensburg and was an ex-minor league player, went to Bill McGowan's school for umpires in 1946 under GI Bill. After completing the course, he umpired in the minor leagues for nearly four years.

On Aug. 16, 1954, Donatelli was featured on the cover of the first-ever Sports Illustrated. In the magazine cover photo, Donatelli is umping at home plate behind New York Giants catcher Wes Westrum and Milwaukee Braves slugger Eddie Mathews, who is swinging at a pitch in Milwaukee County Stadium.

Author John Bacchia told the umpire's story in a 2011 book "Augie: From Stalag Luft VI to the Major Leagues."

"Everyone knew him and knew how he was. He was a fighter."

• Spent 24 years as a National League umpire before retiring in 1973.

• Served in the Army Air Forces' Eighth Air Force during World War II and spent 15 months as a prisoner of war, during which time he began umpiring softball games.

No matter the size of the role, Greater Johnstown product LaRod Stephens-Howling was certain to make as big an impact.