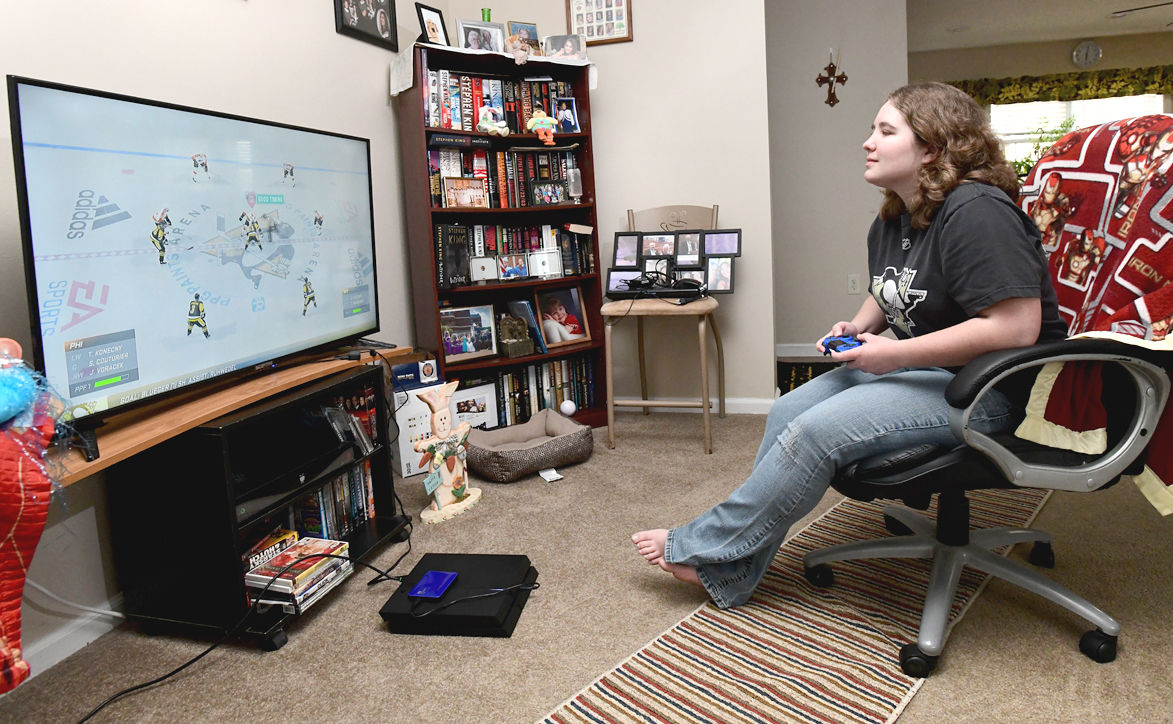 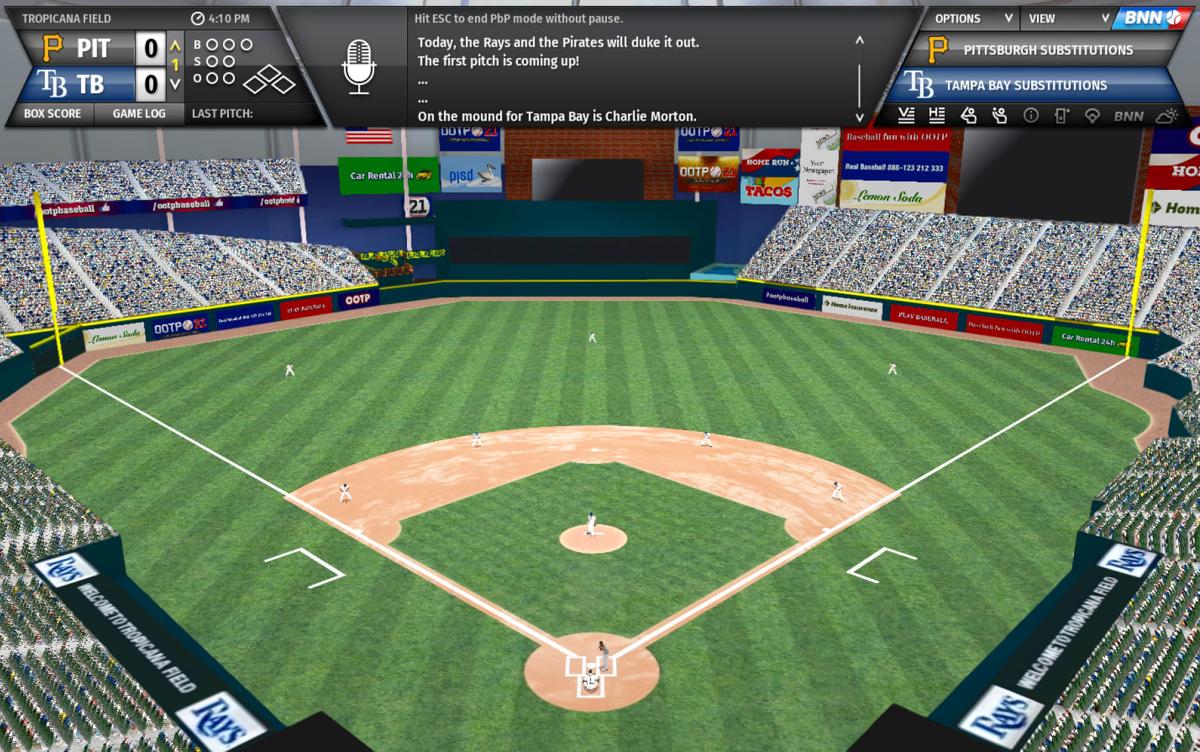 The beginning of a simulated game between the Pitsburgh Pirates and Tampa Bay Rays on “Out of the Park Baseball 21.” 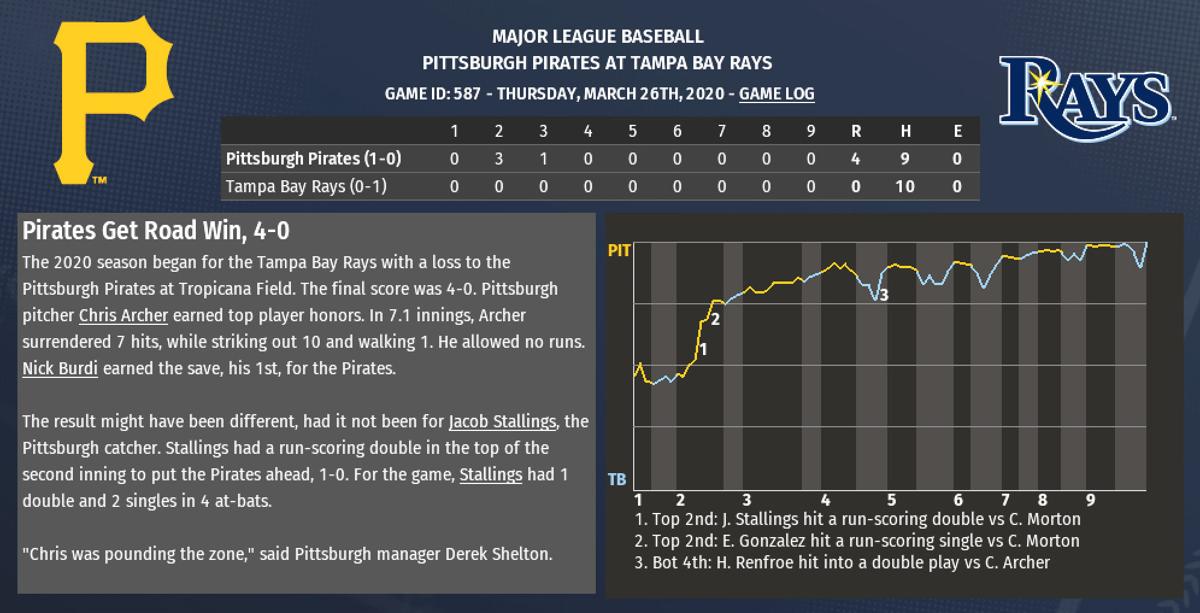 A recap of the Pirates’ virtual victory over the Tampa Bay Rays on March 26 on "Out of the Park Baseball 21." 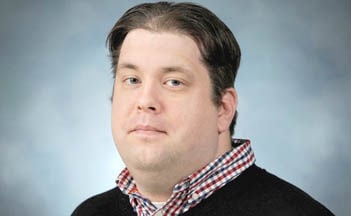 The beginning of a simulated game between the Pitsburgh Pirates and Tampa Bay Rays on “Out of the Park Baseball 21.”

A recap of the Pirates’ virtual victory over the Tampa Bay Rays on March 26 on "Out of the Park Baseball 21."

It’s been a month since the sports world screeched to a halt in response to the continued spread of the COVID-19 pandemic across the globe.

The downtime, with heavy doses of social distancing and sheltering at home, has led to a new reality: Couches aren’t just for rest days anymore.

Athletes and fans around the globe are turning to virtual versions of their sports to get in a few reps or just to let loose.

Pro athletes have taken to made-for-television events on games such as “NBA 2K20,” “MLB 20 The Show,” “Madden NFL 20” and most notably, “iRacing,” with Fox Sports 1 broadcasts of NASCAR drivers behind virtual wheels pulling in some of the highest ratings for any esports program.

For those regularly getting paychecks through other means, the escapism provided by watching sports on television or in person has been replaced with taking on the fortunes of their favorite teams or players virtually.

It’s in the game

Under normal circumstances, the Pittsburgh Penguins would have started their postseason journey this past week.

But like the rest of the NHL, the Penguins haven’t taken the ice since March – with no confirmed date on a return to play.

The absence of live NHL action, just as the regular-season schedule was hitting its homestretch, has left a void for some.

“It’s been boring not having hockey,” Jenna Altemus, of Cover Hill, said.

“I usually go to the bar and watch the games with people. But they are replaying old games, which is cool.”

Altemus, who has seen an increase in time spent across all of her gaming options with Nintendo’s “Animal Crossing: New Horizons” getting plenty of attention on her Nintendo Switch, also has “NHL 20” on her PlayStation 4 for her time away from her job at Merho Federal Credit Union, in Richland Township.

“NHL 20,” which is also available on Microsoft’s Xbox One, gives gamers a chance to play in a number of different modes, while offering a slick television-broadcast presentation during gameplay.

“The graphics nowadays look realistic and that helps,” Altemus said.

While “NHL 20” is the most recent release of the EA Sports series that dates back to 1991, Altemus said that she’ll often trade the bells and whistles of the 2019 release for a throwback feel, opting for NHL ‘94 or NHL ‘96 on her Super Nintendo Entertainment System (SNES) for an added sense of comfort.

“I used to play with my dad before he died, and it just kind of brings back memories,” Altemus said.

But when the matter of real hockey is at hand, Altemus is guardedly optimistic about the game’s return.

“I do think the NHL will be back, eventually,” she said. “Not saying I don’t have hope for the league coming back this season, because I do hope they come back. I just think once this whole quarantine is over, they’ll make sure everything is safe before any sports will be back.”

Morgan Portash, of Portage, is not only lamenting the loss of the Penguins for the time being, but also the NBA’s Milwaukee Bucks.

Of all seasons for there to be uncertainty surrounding the status of the NBA playoffs, a year when the Bucks – 53-12 before the NBA stopped its season on March 11 – had legitimate championship aspirations stings a bit more for the longtime Milwaukee fan.

“Giannis (Antetokounmpo) is probably – other than LeBron (James) – the best player in the NBA,” Portash said. “I know there’s always talk of LeBron being the greatest of all time, but you had Giannis, Khris Middleton, the whole supporting cast. This year was the year Milwaukee was going to win the title for the first time since (1971).”

But if the Bucks can’t take the hardwood for a while, Portash can control the fortunes of the team that his father supported from childhood via “NBA 2K20” on his PlayStation 4. The annual NBA release from 2K Sports gives gamers a chance to guide teams through multiple seasons in its MyLeague mode.

While Portash’s virtual Bucks are set to begin the NBA playoffs as the Eastern Conference’s top seed on his copy of “NBA 2K20,” there’s something missing from the overall experience of not only watching the Bucks, but the Penguins and sports in general.

“It’s not the same,” Portash said. “I like going out. I could be home watching the hockey game. I could go out to the bar. There’s certain things in live sports that you can’t get through video games, definitely.”

But Portash is still able to enjoy a bit of the camaraderie that comes with sports through online play and sharing.

“I’ve been online quite a good bit,” Portash said. “My brother (Jeremy) and I play a good bit. There is a way to gloat, and a way to show off with friends that you can play online with.”

“Out of the Park Baseball 21” is a different breed of game for baseball fans.

The text-based simulation rewards players with the sharpest baseball minds while eliminating the need for the quickest thumbs.

The front-office and managerial game with Major League Baseball licensing has quickly gained a reputation as one of the most accurate simulation engines in sports video games.

It’s led to numerous files of a virtual 2020 baseball season, including two charting the fortunes of the Pittsburgh Pirates with active followings on Twitter.

The Pirates blog North Shore Nine was co-founded by Ryan Alexander and Anthony DiNardo, who share their version of the Pirates’ 2020 season – which is hashtagged as #NS9MisplacedSeason – on the blog’s Twitter account, @NorthShoreNine; and Jim Rosati, a Pirates fan in Louisville, Kentucky, who has his own version of the club’s season shared through his Twitter account, @NorthSideNotch.

So far, the separate accounts have led the Pirates to similar waters.

Rosati’s save has the Pirates sitting at 7-8 after a 6-3 win over the Baltimore Orioles on Saturday. It was the second Pirates victory of the day after Rosati’s version of the game rained out Friday’s contest.

The “Misplaced Season” Pirates got their game in on Friday, a 14-2 thumping of the same hapless Orioles.

While teams hadn’t released their official rosters for opening day, the path to establishing rosters for the March 26 games that only happened on computers each have an interesting slant, with the North Shore Nine crew giving some power to the people.

“One of our main goals for this sim was to encourage as much interaction as possible and involve our followers on key decisions, so we ran numerous Twitter polls prior to opening day for the last roster spots and who to bat leadoff,” Alexander said.

“The response was great and we plan to keep up the polls throughout the season, allowing Twitter to make the call on starting lineup changes if a player is struggling, who to call up from the minor leagues if there’s an injury, and how to react to a trade offer from another team. “

But there’s also the matter of making moves throughout the season for a franchise rarely known for making a splash with acquiring on-field personnel.

“I will try to keep things as realistic as possible,” Rosati said. “The next real decision I am going to have to make is when Steven Brault comes off the Injured List in a few weeks. I anticipate him making a few rehab starts in Indianapolis before deciding if he will join the rotation or the bullpen. We will see how that goes.”

Rosati resided in South Park Township and McDonald Borough before leaving the Pittsburgh region in 2005 to study at the University of Louisville.

He saw an opportunity to use an escape as a way to add a little bit of normalcy in a world rocked by uncertainty.

“I figured there are probably a lot of people like myself who miss baseball and would like to know how the Pirates would be doing on a daily basis, even if it is all fake,” Rosati said.

Alexander, who also co-hosts the NS9 Podcast, had similar motivations born from curiosity.

“About a week before the season started, I just had a thought about simulating the season to see what the results would be of a full 162-game season – since we would never truly know,” Alexander said. “I decided to do it game-by-game, day-by-day, releasing the results the day of when each game was supposed to take place to give our followers some kind of enjoyment on Twitter and our website through this lull.”

Bishop McCort senior to compete in esports at St. Francis