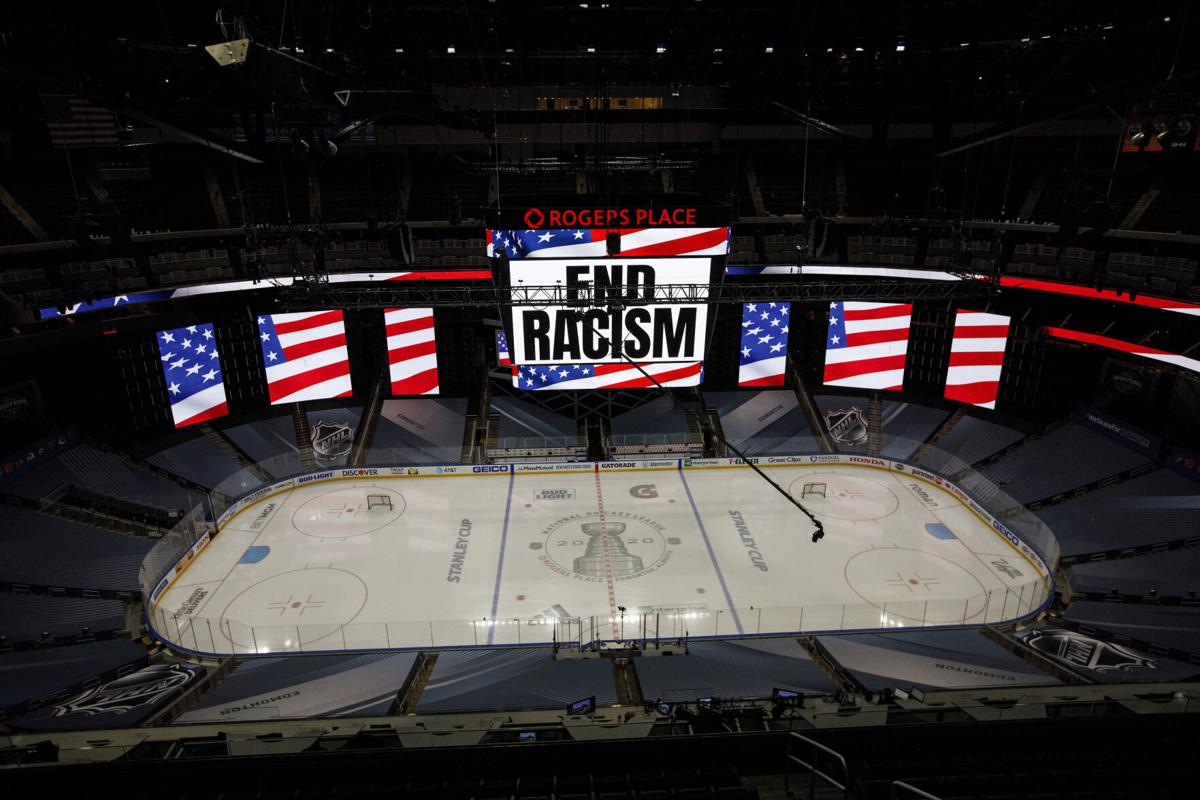 An End Racism sign is displayed before Game 3 of an NHL hockey second-round playoff series between the Colorado Avalanche and the Dallas Stars, Wednesday, Aug. 26, 2020, in Edmonton, Alberta. (Jason Franson/The Canadian Press via AP)

An End Racism sign is displayed before Game 3 of an NHL hockey second-round playoff series between the Colorado Avalanche and the Dallas Stars, Wednesday, Aug. 26, 2020, in Edmonton, Alberta. (Jason Franson/The Canadian Press via AP)

To borrow from the words of historic union leader Samuel Gompers, I want more.

Pro athletes want to refuse to play a few games as a protest regarding social injustice. I say ramp it up.

Refuse to play any games at all. Refuse to take any contractual money while you’re at it.

Put some significant personal sacrifice into the cause. Don’t just take a day or two off, with pay.

As the Los Angeles Times correctly noted in an article quoting a professor who teaches sports law, what NBA players and others did Wednesday was not a boycott, but rather a wildcat strike.

That is an important distinction. Oldtimers in this area would be familiar with wildcat strikes. When I was growing up, it was a periodic tool of coal miners to protest what they perceived as legitimate workplace grievances that were not being addressed by management or ownership.

A notable distinction is those miners, having made their statement, didn’t hop into high-buck cars to return to their gated communities as so many pro athletes do – at least when they’re not trapped in a COVID-19 bubble.

First of all, Carter is Black. The fact that this must be pointed out by those quoting him (and feel free to do an internet search to find this exercise repeated) speaks to our society’s sad state.

The NHL had come in for some sniping because its players didn’t play follow the leader and instead played their scheduled games, unlike the NBA or some Major League Baseball teams. That changed Thursday.

But Carter, speaking during the NBC Sports Network broadcast Wednesday, an event I happened to be watching, had this to say as quoted afterward on an NHL.com story.

“I’m OK with them playing the game, continuing to play,” Carter said. “And also, the league went about their business and identified and acknowledged what has happened.

“But my focus right now really is, what are we doing about it? Yes, we can protest. Yes, we can sit out. But what change are we actually trying to do?

“If you protest and go about your business and nothing really changes, then what is the sense of protesting? The focus really should be now on what are we doing to change?”

As mentioned, the NHL players eventually fell into line and the league supported postponing playoff games, a #MeToo movement of a different sort.

If players in all sports really want to make a huge statement, then show a significant sacrifice for what you have identified as a cause worthy of such and don’t play again for months, or years.

Theirs is empty backing. They don’t plan on losing any revenue from broadcasts because the games ostensibly will be made up and they already are sacrificing gate revenue as a concession to the COVID-19 problem.

The massive value of the franchises, while perhaps lessened marginally by the current state of professional sports, aren’t likely to be diminished permanently by it.

Most of these owners are sitting on massive capital gains from having owned their teams through years of monumental growth.

But should players decide to make a statement beyond the superficial and actually shut down entire seasons and forego their paychecks, well, those franchise values would tumble.

Economic reality would intrude and both ownership and league management would have a more difficult time backing the moves of the players.

A cynic might doubt that they would be so supportive then.

This protest should be a matter of belief. If a person truly believes in the cause, then no sacrifice – economic or otherwise – should be too great.

If, however, this is a mass exercise in virtue signaling, it would be good to know that, too.

Sam Ross Jr. is a freelance journalist who writes a column for The Tribune-Democrat.

The fluid nature of the language extends to sports jargon and that means it is time to update the glossary of fun and games to reflect our COVID-19 times.