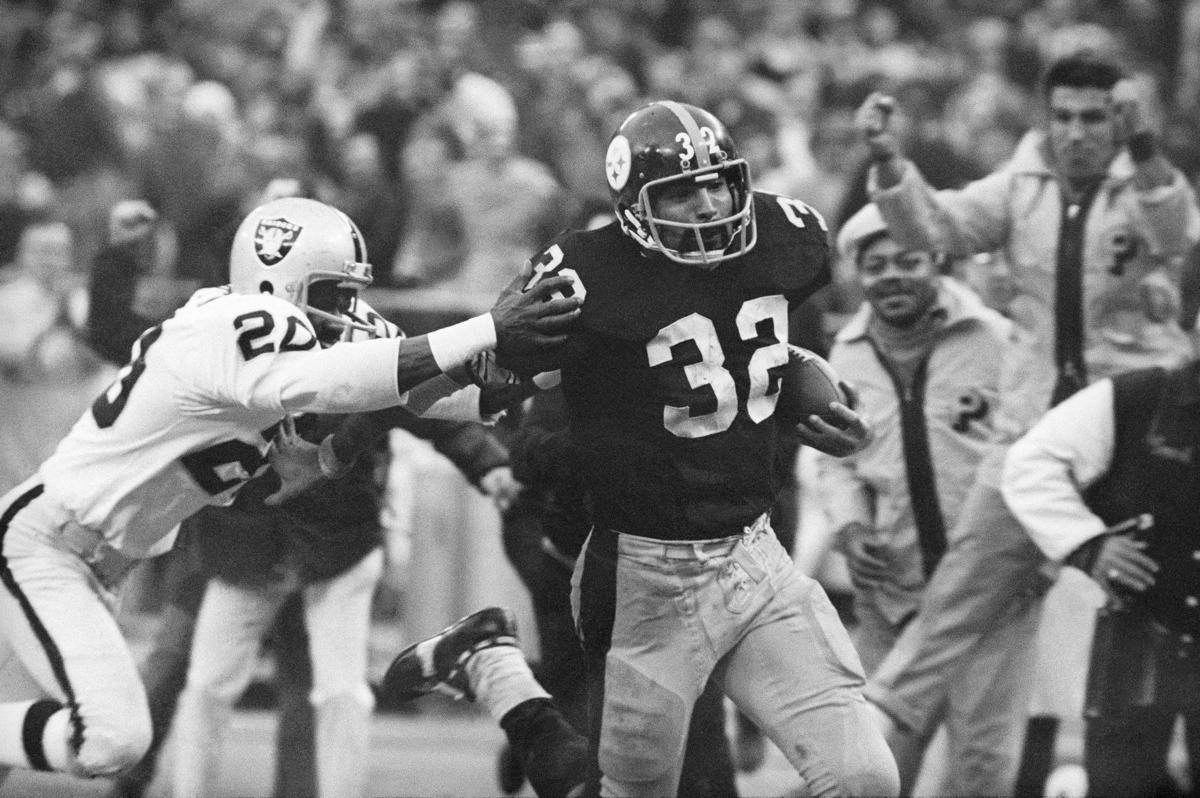 In this Dec. 23, 1972, file photo, Pittsburgh Steelers' Franco Harris (32) eludes a tackle by Oakland Raiders' Jimmy Warren as he runs 42-yards for a touchdown after catching a deflected pass during an AFC Divisional NFL football playoff game in Pittsburgh. Harris' scoop of a deflected pass and subsequent run for the winning touchdown, forever known as the "Immaculate Reception." (AP Photo/Harry Cabluck, File)

In this Dec. 23, 1972, file photo, Pittsburgh Steelers' Franco Harris (32) eludes a tackle by Oakland Raiders' Jimmy Warren as he runs 42-yards for a touchdown after catching a deflected pass during an AFC Divisional NFL football playoff game in Pittsburgh. Harris' scoop of a deflected pass and subsequent run for the winning touchdown, forever known as the "Immaculate Reception." (AP Photo/Harry Cabluck, File)

The selection of the Immaculate Reception as the greatest play in the first 100 seasons of the NFL reminds us that not only are controversial officiating calls an integral part of the game, now one provided what has been determined to be the single most memorable moment in a century of play.

All these decades later, despite laborious, time-consuming video reviews and challenges aimed at erasing doubts about calls, uncertainty in officiating decisions continues for reasons either technical or judgmental.

We’re never going to achieve perfect clarity and consensus, in coaching, playing, or officiating. Get over it.

Speaking of getting over things, the Oakland Raiders and their fans never got past their anger over the Immaculate Reception.

By way of background, the Raiders were playing the Steelers in a divisional playoff game in Three Rivers Stadium. The date was Dec. 23, 1972.

It was the salad days of the great Steelers dynasty of the 1970s. The home team was trailing 7-6 late in the fourth quarter when Terry Bradshaw was chased out of the pocket, uncorked a pass that reached running back French Fuqua just as Raiders defensive back Jack Tatum, with his reputation as one of the hardest hitters in football, arrived looking to drill Fuqua at the Oakland 35-yard line.

The ball ricocheted wildly back toward the line of scrimmage before being scooped up by Franco Harris and run into the end zone for the winning touchdown.

If you’ve seen the grainy replays from NFL Films you hear Steelers radio announcer, the late Jack Fleming, exclaiming, “It’s caught out of the air!”

These days there would have been lengthy reviews from all camera angles of whether or not Harris had caught the ball cleanly. But the pivotal question back then, one not subject to video review, was whether Fuqua or Tatum had deflected the ball backward.

The rules of the time precluded consecutive touches by offensive players on a pass. It was critical whether Tatum, or Fuqua had hit the football.

My favorite explanation for it having to have deflected off Tatum relies on physics and Tatum being the only player able to transfer that kind of momentum to the football because he was running full-speed in the direction the ball bounced after the contact.

Network television announcer Curt Gowdy fingered Tatum for having made the deflection almost immediately while describing an in-game replay.

The officials weren’t so sure at first. According to an account from the LA Times, referee Fred Swearingen was summoned to a phone in a baseball dugout by Art McNally, the NFL’s senior official, who was in the press box.

McNally had seen television replays and found them inconclusive. He asked Swearingen what his call was. Swearingen said it was a legal touchdown and McNally agreed.

Swearingen emerged from the dugout, signaled a touchdown, and in so doing certified what has been adjudged the greatest play in NFL history.

Raiders players, including safety George Atkinson, insisted the phone call was to determine if the officials could get out of Three Rivers Stadium with their lives if they ruled no touchdown and, having been given no such assurance, they did the expedient thing and awarded the score.

Raiders coach John Madden, yes the future announcer and video game title guy, was fuming after the game about unauthorized video review being used to make the call.

When the NFL Network did a special on the Immaculate Reception in 2012, Madden, who certainly is no shrinking violet when it comes to publicity, refused to be interviewed for it.

Fuqua has never spoken on the record to say definitively whether he hit the ball, citing a postgame conversation with the Steelers owner at the time, Art Rooney, Sr., who advised him that some things are better kept to oneself.

And Harris deflects questions about whether or not he caught the ball cleanly, saying that it all is a blur and all he remembers is running with the ball to the end zone.

If the NFL survives for another 100 seasons, the continuing efforts to sanitize the game make it unlikely there will be another such moment picked as the most memorable for NFL Century 2. That is a pity.

Sam Ross Jr. | When it comes to the Super Bowl, want to bet?

Never mind Punxsutawney Phil’s annual prognostication of whether or not we face six more weeks of winter. What he should have been asked, shortly after having been plucked from his burrow early Sunday morning, was his pick for the Super Bowl.