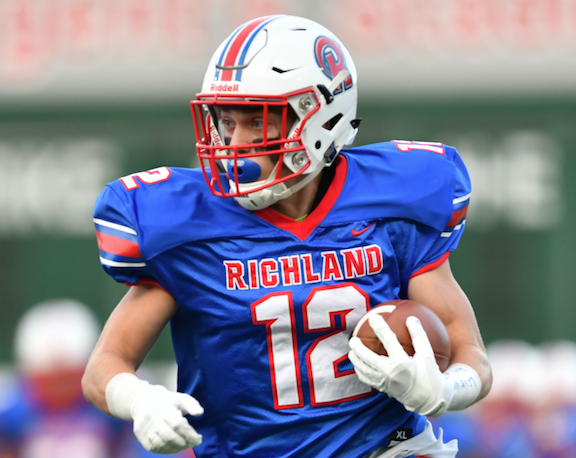 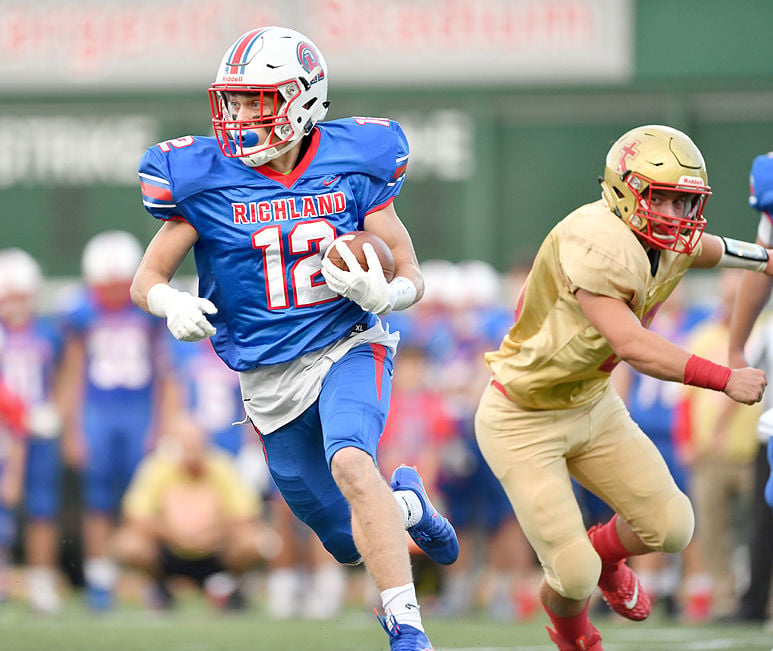 Caleb Burke has adapted to playing football – and soon basketball – without one of his best friends by his side at Richland High School.

Apparently, the hiatus will last only one academic year.

The Rams’ multi-sport standout Burke announced Monday night via Twitter that he had committed to play football at the University of New Hampshire, a NCAA Division I Football Championship Subdivision program.

Burke will be reunited with former Richland standout lineman and Tribune-Democrat 2018 Defensive Player of the Year Collin Instone, who is a freshman at the University of New Hampshire and a member of the Wildcats football team.

“Collin was jumping up and down when I told him,” Burke said of the 6-foot-3, 281-pound Wildcats defensive tackle. “He’s like a little kid. As big as Collin is, he’s still a little kid. He was very excited for me. I plan on getting down there soon to go see him.”

“Congrats little bro! can’t wait to ball up with you for another couple years! big things coming.”

Next season, the Richland duo will be reunited on the field and on campus in Durham, New Hampshire.

“It really helps that one of my best friends is out there who I’ve basically lived with the past four years in high school and has been there throughout my whole life,” Burke said before Richland’s Tuesday afternoon practice at Herlinger Field. “Everything they have out there to offer, all of their facilities, their coaches, are amazing.

“They seem like their players are great people. They traditionally raise great guys who go through their program.”

The Wildcats are 0-2 this season after a 13-10 loss to Holy Cross and a 20-17 setback to Florida International University.

The Wildcats compete in the Colonial Athletic Association.

“I felt like it was a place I really wanted to go,” Burke said. “Their football program is the real deal. I think it had the best opportunity for me to go and continue my career as a football player.”

Burke also is a standout guard on the Rams basketball team coached by his father, Greg Burke. He is a 1,000-point scorer and was a key part of the 2018 state runner-up hoops squad.

On the football field, Caleb Burke has 19 receptions for 368 yards and seven touchdowns for the 4-0 Rams this season.

His career numbers to date include 139 catches for 2,379 yards and 27 touchdowns.

The Rams went 13-1 during Burke’s junior season in 2018 and have won 17 of the past 18 games entering this week’s contest against visiting Somerset on Friday.

“We’re excited for Caleb,” Richland coach Brandon Bailey said. “He’s obviously worked really hard to get to this point in his career. A full athletic scholarship is not something many people get. That’s room, board, books, tuition fees, all of that stuff. That’s exciting.”

“Collin Instone getting a full scholarship to New Hampshire last year opened up some doors,” Bailey said. “That’s how they started evaluating kids at Richland. Caleb got on their radar and they loved him since they started watching. I think it’s a good fit.”

Bailey said the athletic 6-foot-1 receiver will take plenty of skills with him to New Hampshire.

“He’s super athletic,” Bailey said. “He’s typically the fastest player on the field. He’s got great ability to move side to side and make people miss. He understands the concepts that are going on.

“As time has gone on, he’s become the leader and done what we’ve asked him to do. I think that’s a big part of why we’re 4-0 right now.”