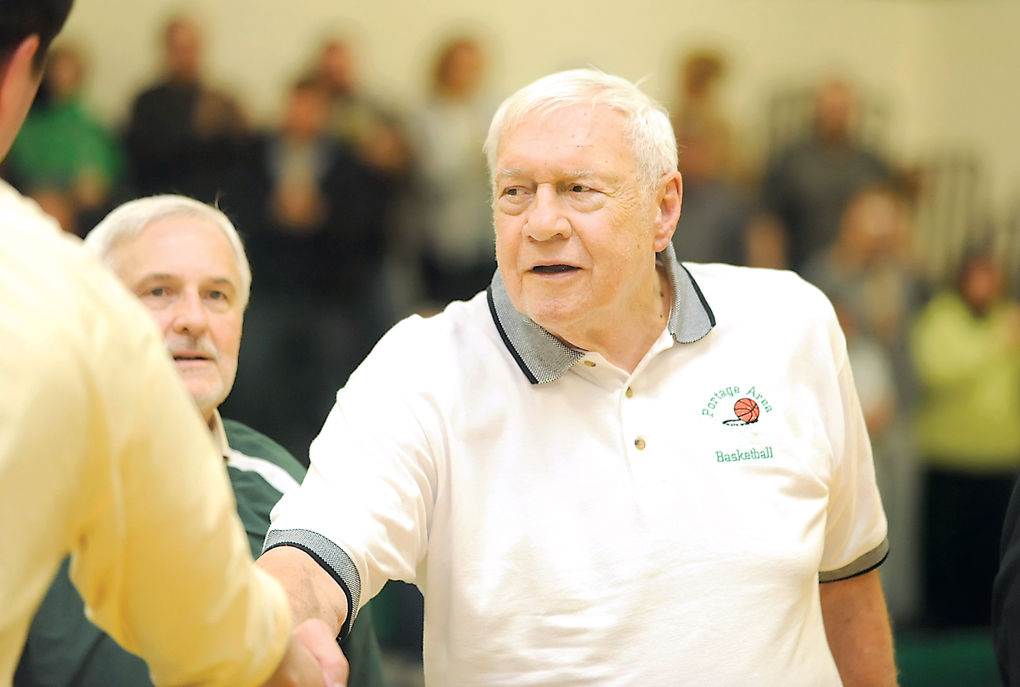 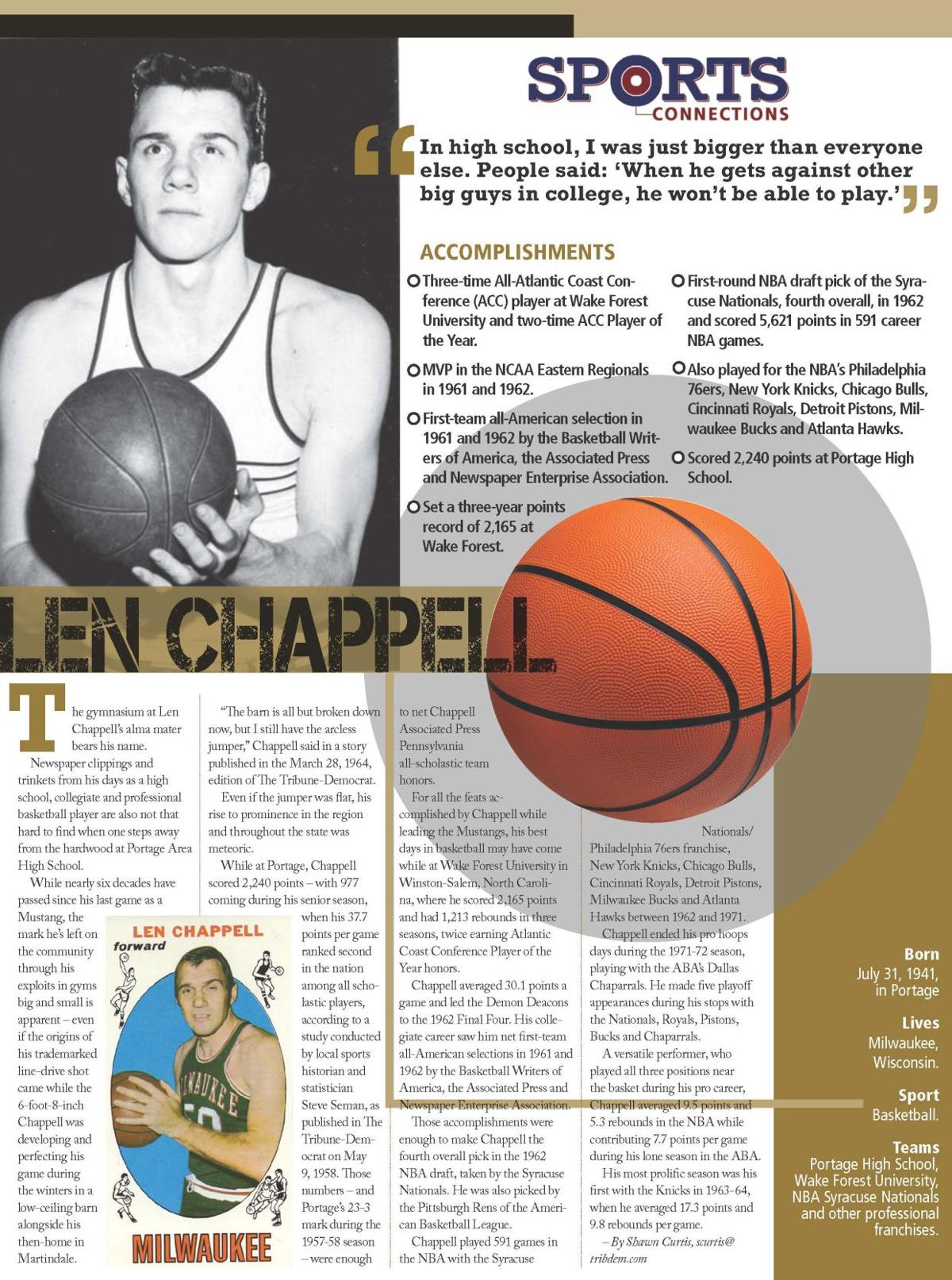 Len Chappell moved away from his hometown more than 50 years ago, but the former Wake Forest University and NBA star never forgot his Portage roots.

When the Mustangs renamed the Portage gymnasium in Chappell’s honor, the man often described as a “gentle giant” was there.

The night Portage recognized its basketball 1,000-point scorers, Chappell made the trip from Milwaukee, Wisconsin, back to Cambria County, where he holds legendary status.

That’s why news of Chappell’s death at age 77 on Thursday had those who followed his stellar high school, college or NBA careers reminiscing about the 6-foot-8, 240-pound center with a soft scoring touch and fierce approach to rebounding the basketball.

“In 1958 we were seniors,” said former Laurel Valley High School standout Woody Burkett, who like Chappell was among the District 6 scoring leaders back in 1957-58.

“When I was at Laurel Valley and he was at Portage, we didn’t play Portage in basketball,” Burkett said. “But I went to see him play a few times when they were in the playoffs. I remember he was big.”

Chappell tallied 977 points as a senior, and his 37.7 points a game average ranked first in the state. Burkett finished ninth in Pennsylvania with 559 points, 25.4 a game.

“Len would be a big man by today’s standards, let alone back then,” said Burkett, 78, a retired miner who also has worked at Champion Lakes Golf Course for five decades. “For his size I always thought he had a good touch on the basketball and he could rebound like crazy. I saw him play at the War Memorial in the playoffs.”

“Len Chappell has been a symbol that dreams do come true,” Kargo said.

“You can follow your dreams, even from a small town. He made it. He gives everybody that hope.

“He never forgot where he came from,” Kargo added.

“It’s neat to see somebody have that hometown pride, someone who was willing to come back for all of these events at the school.”

At Wake Forest, he was three-time All-Atlantic Coast Conference (ACC) and twice was ACC Player of the Year. Chappell was named MVP in the NCAA Eastern Regionals in 1961 and 1962.

“I went to see most of his games at Portage and Wake Forest,” said local football icon Jerry Page, a Portage graduate who went on to coach the former Laurel Valley High School football and baseball teams to district and statewide success. “He was 6-foot-8, 240 pounds. You looked at him and he was well put together. He was a heck of a rebounder and a good team player.

“He was a gentle giant.”

Chappell was a first-team All-American selection in 1961 and 1962. The center/power forward set a three-year scoring record with 2,165 points at Wake Forest, where his jersey number has been retired.

“He was in ninth grade when I was a senior,” said former Portage player Don Ellis. “In those days, 1955, you couldn’t play on the varsity in ninth grade so he didn’t play with us.

“He was one heck of a player and one heck of a guy. He was so strong and big,” Ellis said. “In ninth grade he was thinner and not as strong. I told him to start working out and shooting down low because they were going to want him inside.

John Barr, 76, of Dallas, Texas, attended the former Beaverdale High School when Chappell starred at nearby Portage. Years later, Barr and Chappell forged a friendship and remained in touch.

“One of the great, really nice human beings. Just really a super person,” Barr said. “Being in Beaverdale we were six miles away from Portage. Lenny and I knew each other and we really renewed our friendship after he retired out of the NBA. He was an assistant coach with Milwaukee, which was the last place Lenny played in the NBA.”

A businessman, Barr had ties to the Dallas Chaparrals, an American Basketball Association (ABA) team that eventually moved to San Antonio, Texas, and evolved into the NBA Spurs. Chappell played one ABA season with the Chaparrals before retiring.

A few years later, Barr surprised some players in a recreation basketball league when he brought a friend to play.

“I used to sponsor a lot of teams – dart teams, bowling teams, baseball – you name it,” Barr said. “We entered a basketball tournament, and I called Lenny and said, ‘What are you doing this week?’ I told him I’d put a ticket in to will call for him. He was 35 years old at the time and he came down here and put on a hell of a show.”

Chappell had a knack for putting on a show. He also put in the work to elevate his game.

“He lived in a little town called Martindale in Portage,” Ellis said. “He always told me he was out there in the winter shooting that basketball into the rim on the barn.”

The Cambria County Sports Hall of Fame inducted Chappell into its inaugural Class of 1965. He also is a member of the Wake Forest Hall of Fame.

“He represented us well,” the Mustangs’ Kargo said. “You look at his resume. It’s amazing some of the things he has done from a small town like Portage. He meant a lot to our program, our school, our town.”