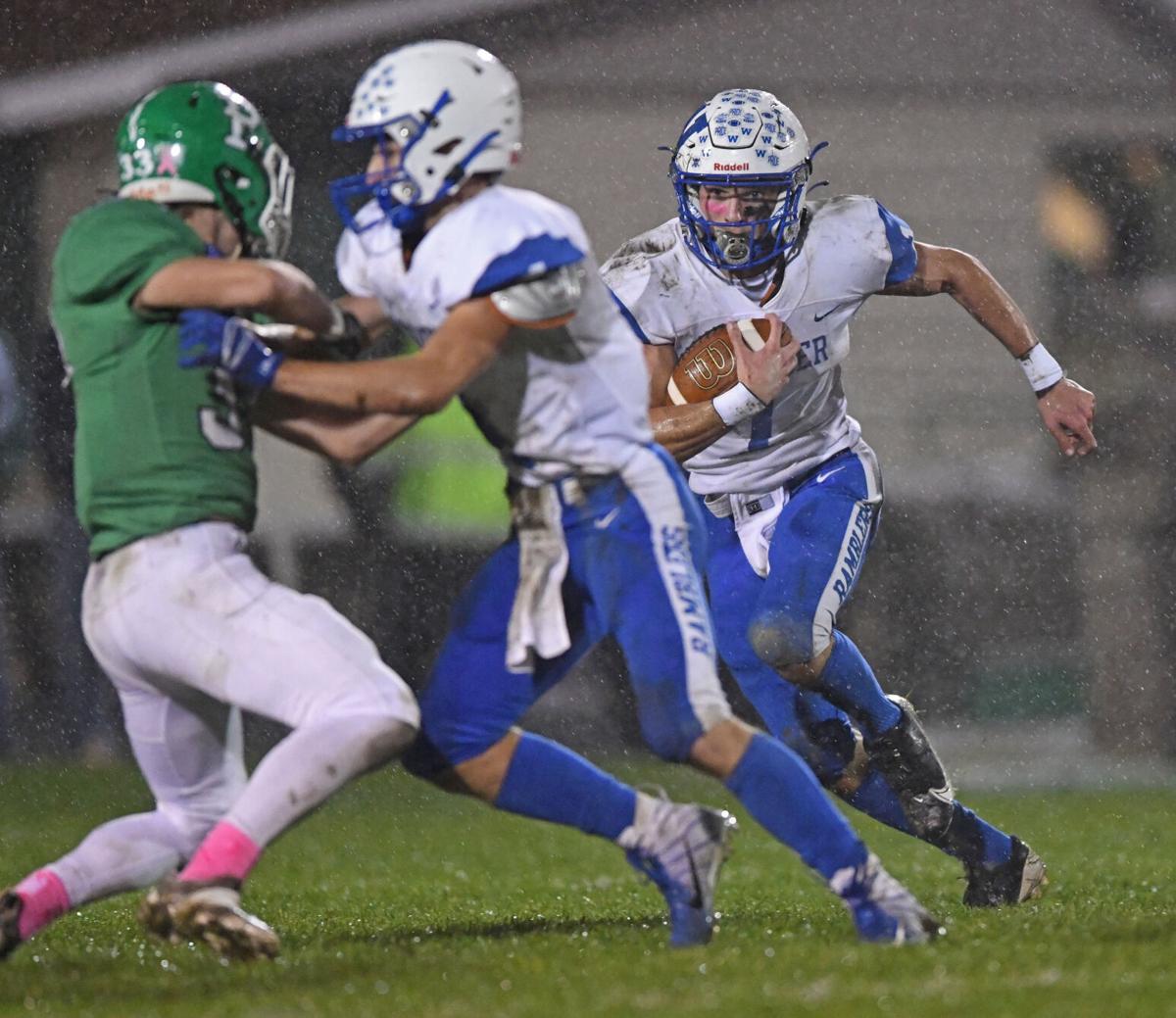 Windber running back Nick Dom looks for room to run during a WestPAC game against Portage, in Portage, Friday, Oct.22, 2021. 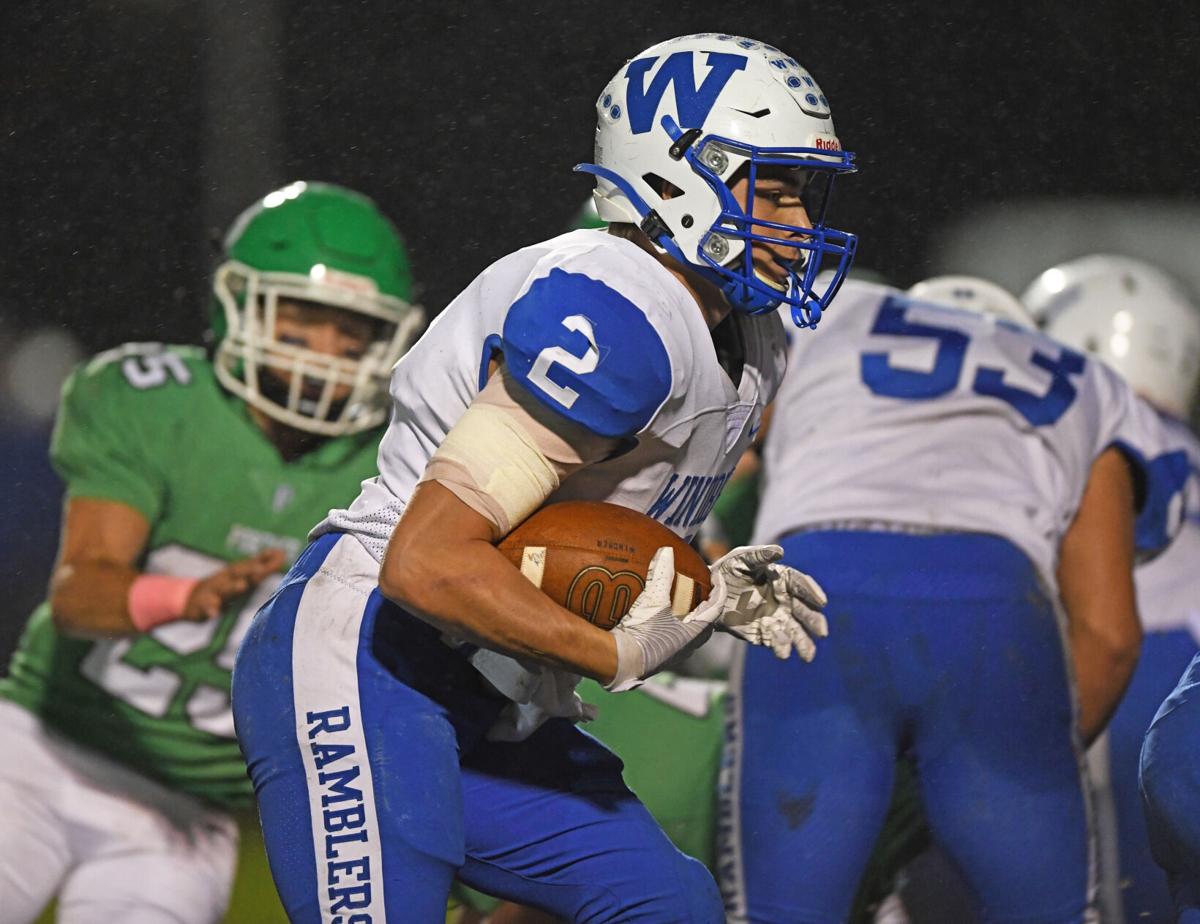 Windber running back John Shuster takes one in for a touchdown during a WestPAC game against Portage, in Portage, Friday, Oct.22, 2021. 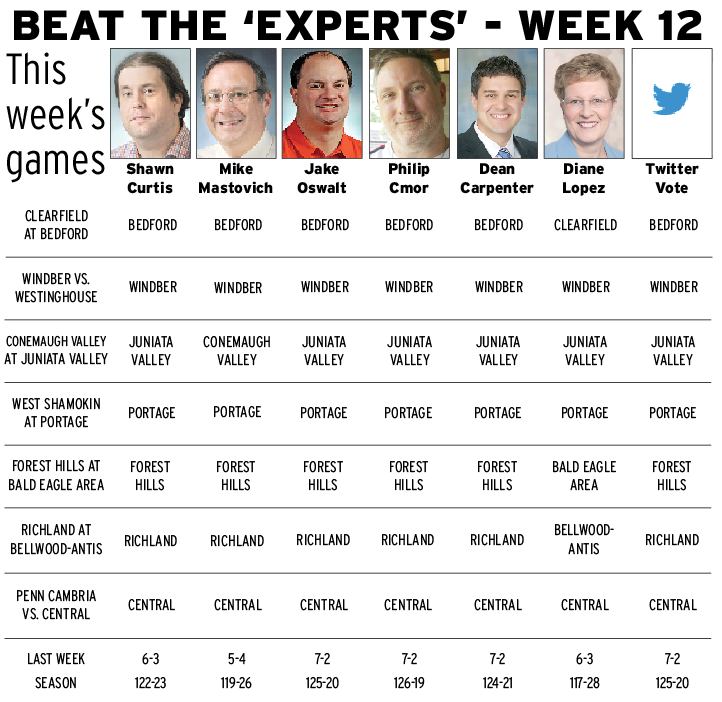 Windber running back Nick Dom looks for room to run during a WestPAC game against Portage, in Portage, Friday, Oct.22, 2021.

Windber running back John Shuster takes one in for a touchdown during a WestPAC game against Portage, in Portage, Friday, Oct.22, 2021.

“You look at them and they look like a small Division II football team,” said Grohal, whose Ramblers will face the Bulldogs at 7 p.m. at Somerset High School. “They are massive up front and they’ve got some really good skill players. The tailback is a dynamic player for them. They’ve got some really nice skill players on the edge and the quarterback is as good a quarterback as we’ve played all season long. He can run and throw.”

Windber is 10-0 after winning the Appalachian Bowl via a 42-0 shutout of Cambria Heights two weeks ago and then shutting out District 5 rival Berlin Brothersvalley 27-0 last week in the semifinal round.

The second-seeded Ramblers have allowed a combined 13 points in the past five games, with three shutouts recorded in that span.

Grohal realizes top-seeded Westinghouse (9-1) will provide a challenge to that stout defense.

The District 8 Bulldogs opened 8-0 but were upset by Taylor Allderdice – a team Westinghouse had beaten handily earlier in the season – in the Pittsburgh City League title game. Last week, the Bulldogs rebounded in a 44-28 victory over District 5 Chestnut Ridge at Cupples Stadium.

“They have a designed RPO on the edge,” Grohal said. “They spread the quarterback out and their receiver doesn’t move on the sideline. Teams have not been able to defend that all season. They’ve had so much success with that this year. That’s the play we have to defend first and foremost.

“If teams defend the intermediate or deep throws, they throw it to No. 15,” Grohal said. “He’s made people miss and once he gets into the open field it’s usually lights out. When you talk about defending the whole field, they make you defend the whole field.

“They put their receivers the whole way to the sideline. They spread you out and a lot of that is so they can run the ball between tackle to tackle.”

Windber has its own weapons on offense, as junior back John Shuster has 1,284 rushing yards, 25 touchdowns and 152 points. Senior Nick Dom has 807 rushing yards on 64 carries, including 407 yards in the past three games, an average of 135.7 a game in that span.

“Johnny is 72 yards away from 4,000 for his career. I don’t know if we’ve ever had anybody rush for 3,000 let alone 4,000 as a junior,” Grohal said of Shuster. “He has 62 touchdowns in his career. If we’re going to win, we’re going to need him to be an absolute animal on Friday. But he could care less about stats. He just wants to win.”

Windber, which has outscored opponents 500-62, finds itself in the unusual role of an underdog.

“We’ve played Clairton and we’ve played Duquesne, some really good Pittsburgh schools before in the playoffs,” Grohal said. “I think the mind-set then was we weren’t good enough to be there. But I don’t think that’s the mind-set now.

“Our kids believe they will win on Friday night.”

About the Bisons: Bedford has had to weeks to prepare for the postseason, and the Bisons will face an undefeated opponent. The Bisons have had recent playoff success with appearances in 2018, 2019 and 2020, advancing to the PIAA Class 3A semifinal round last season. Senior Mercury Swaim has passed for 959 yards and 13 TDs and rushed for 958 yards and 15 scores while also leading the team with 77 tackles. Senior Trenton Price has 722 rushing yards and eight TDs. Senior Josiah Weyandt has eight sacks and junior Kevin Ressler has five interceptions.

About the Blue Jays: Last week, Conemaugh Valley won its first district playoff game since the 1992 Blue Jays claimed the District 6 Class 1A title over Laurel Valley (35-6) and then won a PIAA contest against Northern Bedford (21-20). Senior back Logan Kent broke the school single-season record and has 2,008 rushing yards on 227 carries. Nick Heltzel has 1,069 yards on 101 rushes. Kent and Heltzel have combined to score 40 touchdowns (20 apiece) and 254 points.

About the Green Hornets: In eight games on the field (not including a forfeit win), Juniata Valley has rushed for 1,376 yards, an average of 5.0 a carry and 172 a game. Senior Jayce Rand has 668 yards and 10 touchdowns on 129 carries. Senior Lamber Palmer has completed 46 of 85 passes for 927 yards, 11 touchdowns and two interceptions. Senior Jake Johnson has 16 catches for 364 yards and seven TDs.

Last week: West Shamokin and Portage each had a bye.

About the Wolves: West Shamokin has wins in four of its past five games, including a forfeit win in Week 6. Senior Bo Swartz has completed 120 of 209 passes for 1,957 yards, 20 touchdowns and three interceptions. He also has a team-high 333 rushing yards and 12 TDs. Owen Stover has 45 catches for 884 yards and nine TDs, and Lou Swartz has 40 receptions for 651 yards and seven TDs. Stover leads the team with five interceptions, and Bo Swartz has four picks.

About the Mustangs: Portage will look for its first win since Oct. 1. The Mustangs opened 6-0 but have three straight losses sandwiched between a pair of bye weeks. Seniors Oren Heidler (719 yards, 10 TDs) and Jon Wolford (656 yards, eight TDs) have rushed for 1,375 yards and 18 scores. Junior Andrew Miko has completed 45 of 95 passes for 722 yards, five TDs and four interceptions. Senior Kaden Claar has 22 catches for 412 yards and three TDs.

About the Rangers: Eighth-seeded Forest Hills knocked off top-seeded Cambria Heights in dominant fashion on the road for its first playoff victory under third-year coach Justin Myers. Senior Damon Crawley broke the school single-season rushing record and now has an area-high 2,263 yards and 194 points, including 30 touchdowns. The Rangers have won four straight games and five of their past seven. Matthew Colten Danel has 7.5 sacks.

About the Rams: Three-time defending District 6 champion Richland is 10-3 in the postseason since 2018. Senior quarterback Kellan Stahl is 46 passing yards away from reaching the 2,000 milestone this season. Stahl has 6,455 career passing yards with 89 touchdowns and 19 interceptions. Junior Grayden Lewis (33-678, eight TDs) and senior Griffin LaRue (41-642, 10 TDs) have combined for 74 receptions, 1,320 receiving yards and 18 TDs. Junior Jordan Nichols has nine sacks and LaRue has six interceptions.

About the Blue Devils: Seniors Zach Pellegrine (66 of 109, 1,088 yards, 16 TDs/3 interceptions) and Connor Gibbons (184 carries, 1,392 yards, 16 TDs) have surpassed the 1,000-yard milestone in passing and rushing, respectively. The Blue Devils average 6.3 yards a carry and 212.5 rushing yards a game. Senior Sean Mallon has 24 receptions for 414 yards and seven TDs. Gibbons and senior Brandon Cherry each have three interceptions, and senior Cooper Keen has seven sacks.

About the Panthers: Last week, Penn Cambria ended a four-game losing streak and notched its first district playoff win since beating Forest Hills (14-12) in 2011. Junior quarterback Garrett Harrold has completed 110 of 196 passes for 1,323 yards while carrying 158 times for 1,142 yards. Harrold has six games with 100-plus rushing yards. Zach Grove ran for 144 yards and four TDs in last week’s win at Tyrone, and the junior has 823 rushing yards and 10 TDs this season. The Panthers lost to Central 28-21 in 2014 District 6 Class 2A playoffs.

About the Scarlet Dragons: Junior quarterback Jeff Hoenstine is only 111 passing yards away from 3,000 for the season. Hoenstine has completed 155 of 215 attempts for 2,889 yards, 49 touchdowns and only two interceptions. Senior Parker Gregg has 871 receiving yards and 12 touchdown receptions, and 818 rushing yards and 15 TD runs. Junior Eli Lingenfelter has 742 receiving yards and 11 TDs. Central has outscored opponents 533-149, an average score of 48.5 to 13.5.

{em}Mike Mastovich is a sports reporter and columnist for The Tribune-Democrat. He can be reached at (814) 532-5083. Follow him on Twitter @Masty81.

Two proud traditions in the Indiana and Cambria County communities are about to merge on the gridiron.