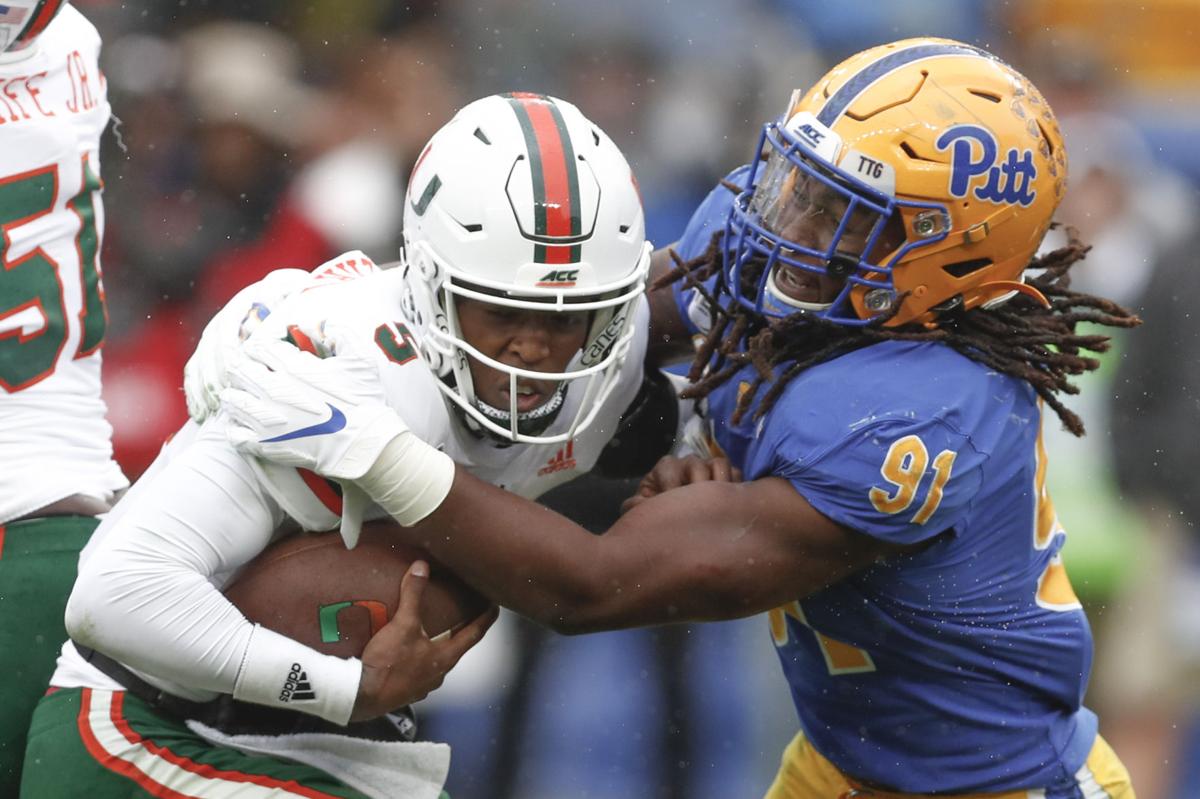 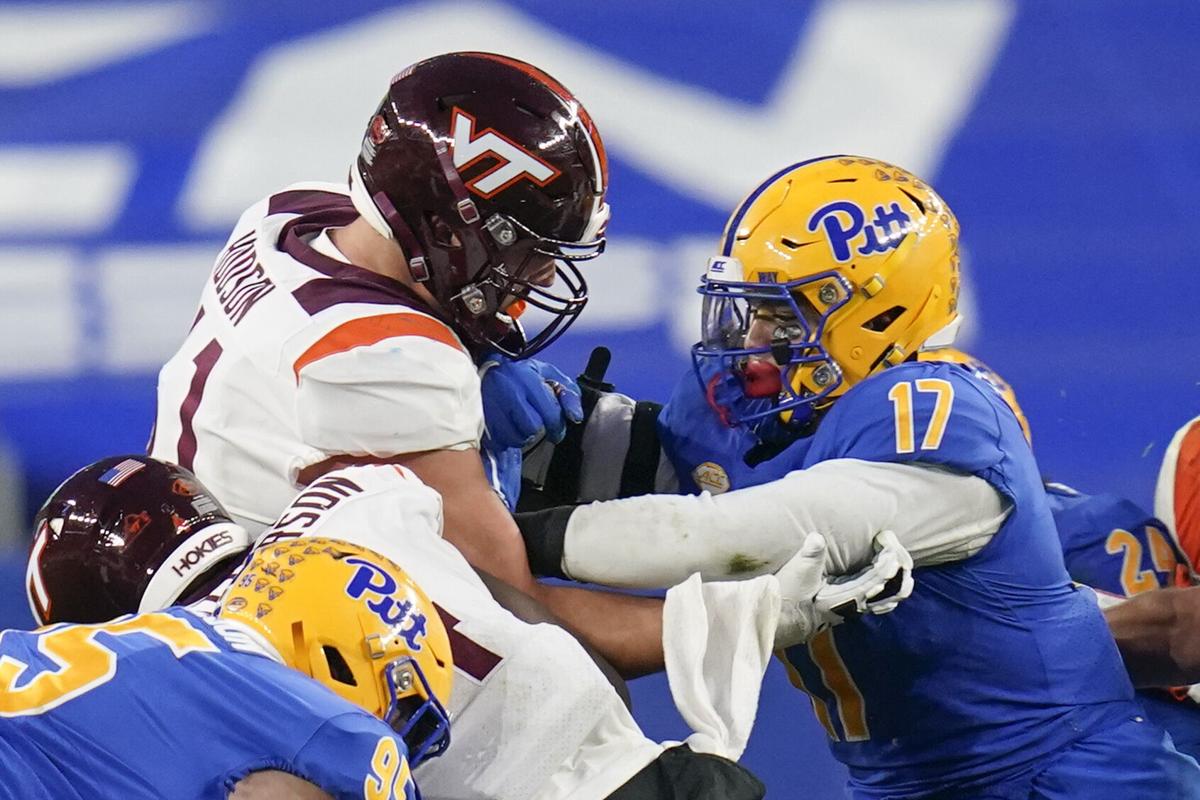 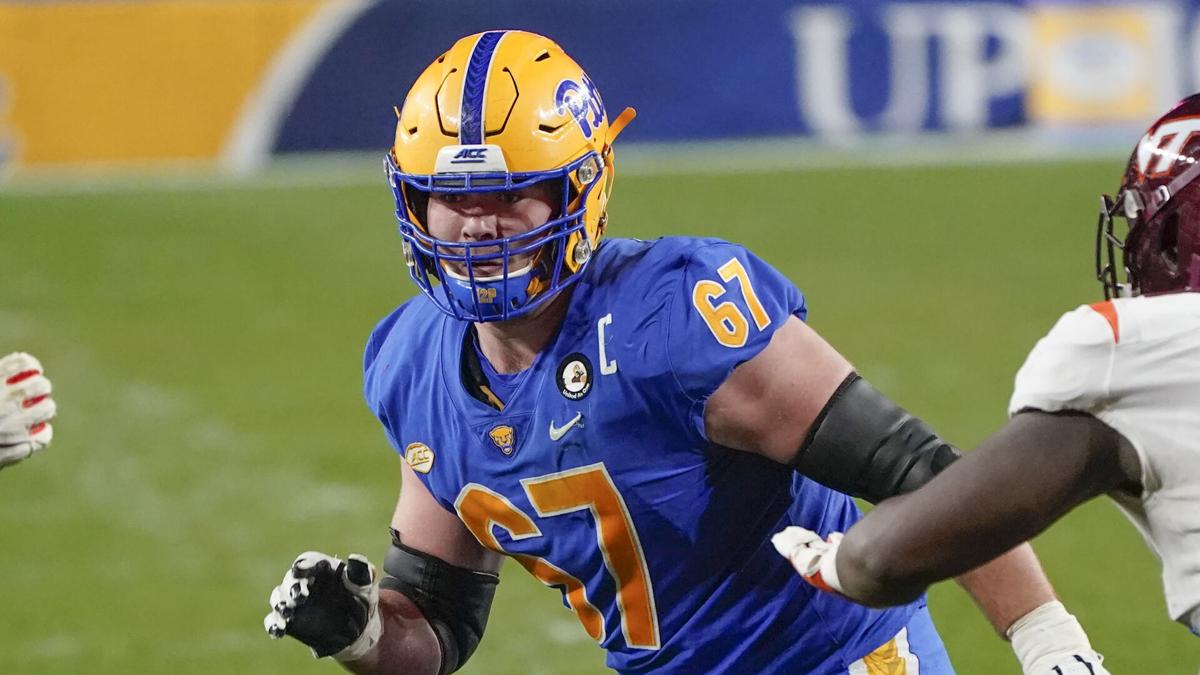 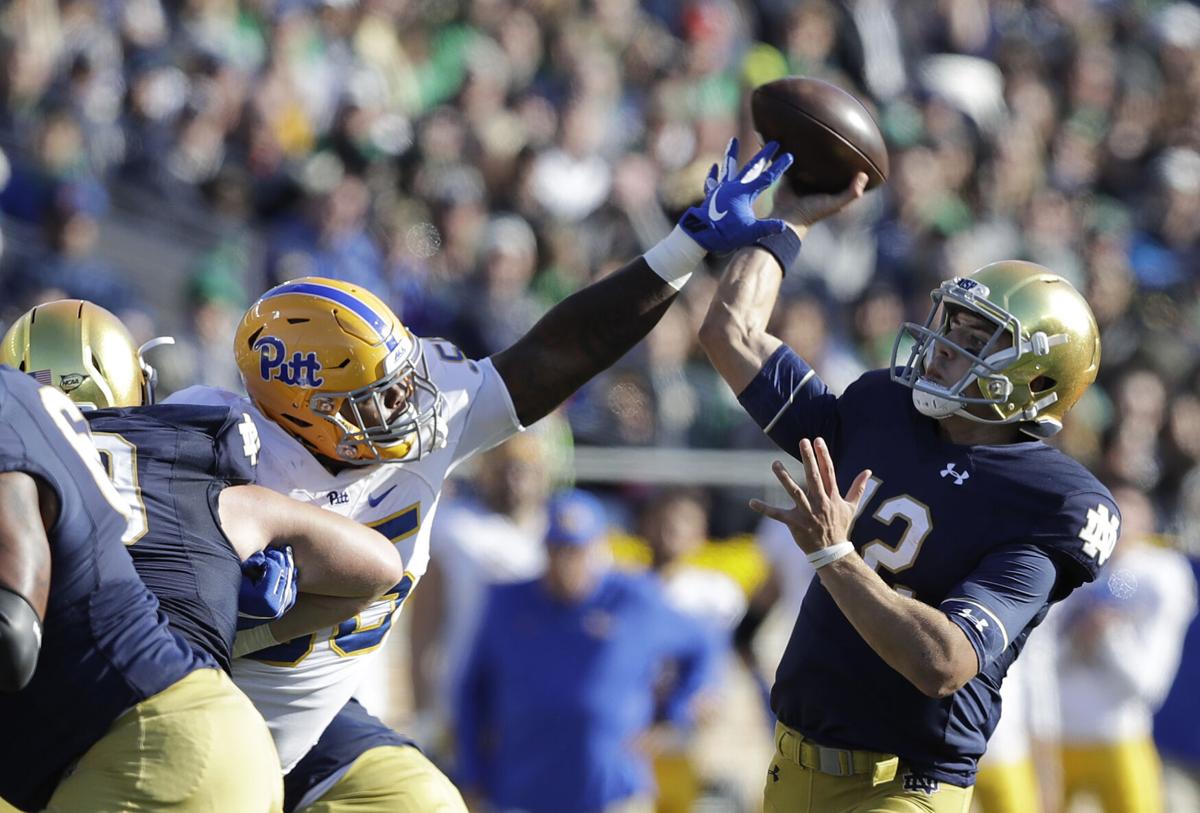 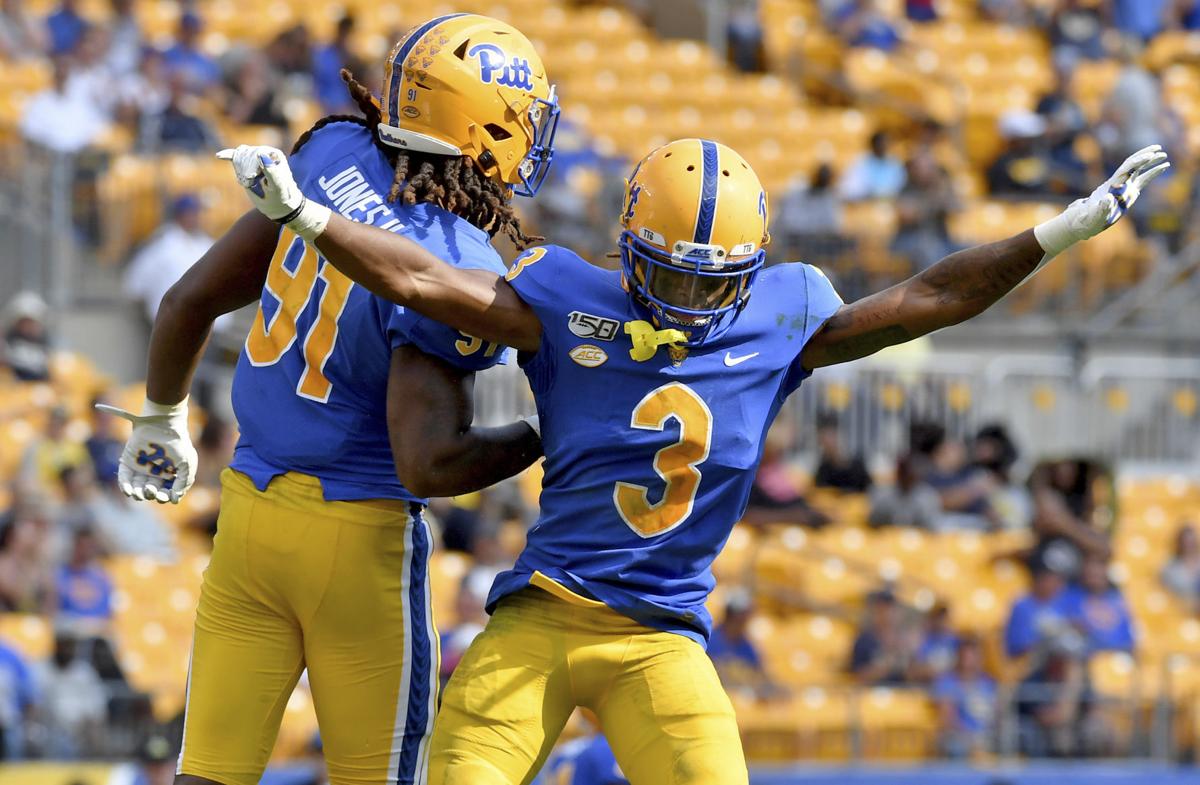 For the first time since its 2004 draft class was headlined by Larry Fitzgerald, the Pitt football program had six players selected in the 2021 NFL Draft, which concluded on Saturday.

Defensive end Patrick Jones II was the first Panther off the board when the Minnesota Vikings drafted him in the third round at No. 90 overall. Jones had been in contact with defensive line coach Andre Patterson in the lead up to the draft.

“I talked to Coach Andre a lot. I just got a feel for him, I just knew he was a great coach. I looked him up, too, and he told me a lot about himself,” Jones said in an interview posted to the Vikings website. “He’s just developed great pass rushers. Now that I get the opportunity to work for him, I’m just excited.”

Jones is similar in size to Vikings defensive end Danielle Hunter, a third-round pick turned All-Pro. Jones will likely compete for the starting defensive end spot opposite of Hunter.

Fellow defensive end Rashad Weaver went to the Tennessee Titans in the fourth round (135th overall). Weaver will be competing for one of the outside linebacker positions with the Titans, who run a 3-4 defense. He’ll be joining former Steeler Bud Dupree, who signed with Tennessee as a free agent in the offseason.

Weaver was already familiar with Dupree, having trained next door to the Steelers facility since him coming to Pitt in 2016.

“Just from him being a Steeler, I was always watching him and T.J. (Watt), because they are great pass rushers,” Weaver said. “And actually, when I was out in Arizona training, I got connected with Bud. Me and him have the same financial advisor now, and I have been out with him a few times, and we text. We’ve had dinner.”“So, me and him are already a little bit acquainted, and I’ll definitely be trying to learn from him and pick his mind.”

Weaver and Dupree also share an injury history – Weaver missed the 2019 season with a torn ACL, while Dupree’s 2020 season ended early when he tore his ACL during a game in early December.

“I know he likes to ask me questions here and there about ACLs, so maybe if I help him, he’ll help me even more,” Weaver said with a smile.

Cornerback Jason Pinnock, who had a standout Pro Day, was selected by the New York Jets in the fifth round at No. 135 overall. Pinnock is excited to follow in the footsteps of fellow Pitt alum and former Jet Darrelle Revis.“I’ve been a fanatic about that man for a while. I love his game, I love his character,” Pinnock said. “I’ve been able to actually have conversations with Revis, and he’s helped my game tremendously just in our two-minute talks.”

Defensive tackle Jaylen Twyman will be joining Jones in Minnesota. Twyman was taken by the Vikings in the sixth round (199th overall).“It’s a blessing to be able to chase quarterbacks down with Patrick again,” Twyman said.

The Vikings website posted a video on Sunday of Spielman placing the draft call to an audibly emotional Twyman.

The former Panther opted out of the 2020 season, choosing to sign with an agent in order to help take care of his mom and younger brothers financially.

“I’m just blessed to be drafted so we won’t have to worry about those financial problems anymore,” Twyman said.

Spielman pointed to Twyman’s productive 2019 season in which he had 10.5 sacks, which the GM hopes will help their inside pass rush.“He does have really good technique, he knows how to use his hands,” Spielman said. “He just needs a little polish, but he gives us something we’ve been trying to find as a potential inside rusher.”

Safety Damar Hamlin will also be playing with a former teammate – he was drafted by the Buffalo Bills in the sixth round (212th overall) and will join former Panther Dane Jackson, who was drafted by Buffalo last year. Both WPIAL products, Hamlin and Jackson have known each other since they were kids. Hamlin told the Buffalo media Jackson is like a brother to him.

“We knew each other since we were about 7 or 8 years old,” Hamlin said. “Ever since, we’ve been on the same mission. We happened to be on the same path in going to Pitt together.”“It’s a dream come true to still be on that same mission together in Buffalo.”Jackson won’t be the only Bill familiar to Hamlin, who told reporters on Pitt’s Pro Day that he had trained with both Jackson and Bills strong safety Jordan Poyer during the offseason.

Hamlin says he’s ready to do whatever it takes to make the team.

“I’m just willing to do whatever just to be a contributor on the team. I don’t care if I gotta pass out water at halftime,” Hamlin said. “I just want to be on a winning team, and I just want to contribute.”

Center Jimmy Morrissey went from walk-on player to NFL draftee in a five-year span when the Las Vegas Raiders called his name on Saturday in the seventh round (230th overall).

“I hang my hat on my work ethic and my love for the game, so I’m gonna be ready to come into the Raiders and give everything I can for the team,” Morrissey told Las Vegas media.Morrissey was a little down that he hadn’t been selected already as the seventh round began and was discussing free agency with his agent when he got the call from Raiders General Manager Mike Mayock.

“Once I heard Mr. Mayock’s voice on my phone, I was like, my dream is coming true,” Morrissey said with a grin.

Wide receiver D.J. Turner will join Morrissey in Las Vegas, as he signed with the silver and black as an undrafted free agent following the draft. Turner told the media on Pitt’s Pro Day he was hoping his abilities as a kick and punt returner would set him apart from other receivers, which seems to be the case with the Raiders. In a video Turner posted on Instagram, he can be seen talking on the phone to coach Jon Gruden, who asked him about his punt return abilities and called the tape he’s seen of Turner “awesome.”

Hard-hitting safety Paris Ford was not drafted, but quickly signed as an undrafted free agent with the Los Angeles Rams. Ford will be joining former Panther Aaron Donald in L.A. Ford, along with Hamlin and Morrissey, trained with Donald during the offseason in Pittsburgh. Ford opted out of the 2020 season in early November after compiling 147 tackles, six interceptions and three forced fumbles during his Pitt career.

Kicker Alex Kessman is also heading to Los Angeles, as he announced he had signed with the Chargers on Twitter on Saturday evening. Kessman owns the NCAA record for making 66.7% of field goals of 50-plus yards. Kessman should be able to compete for the job after Chargers’ kicker Michael Badgley missed nine field goals and three extra points during the 2020 season.

Offensive lineman Bryce Hargrove is headed to Georgia, signing as an undrafted free agent with the Atlanta Falcons on Saturday. Hargrove was a two-year starter at Pitt who was an ACC third-team selection in 2019 and earned honorable mention recognition in 2020.Hargrove posted a graphic of him in a Falcons jersey on Instagram with the caption, “Blessed beyond belief. We don’t make it this far where I’m from.”

Pittsburgh defensive end Patrick Jones II was selected in the third round (90th overall) of the 2021 NFL Draft on Friday evening by the Minnesota Vikings.