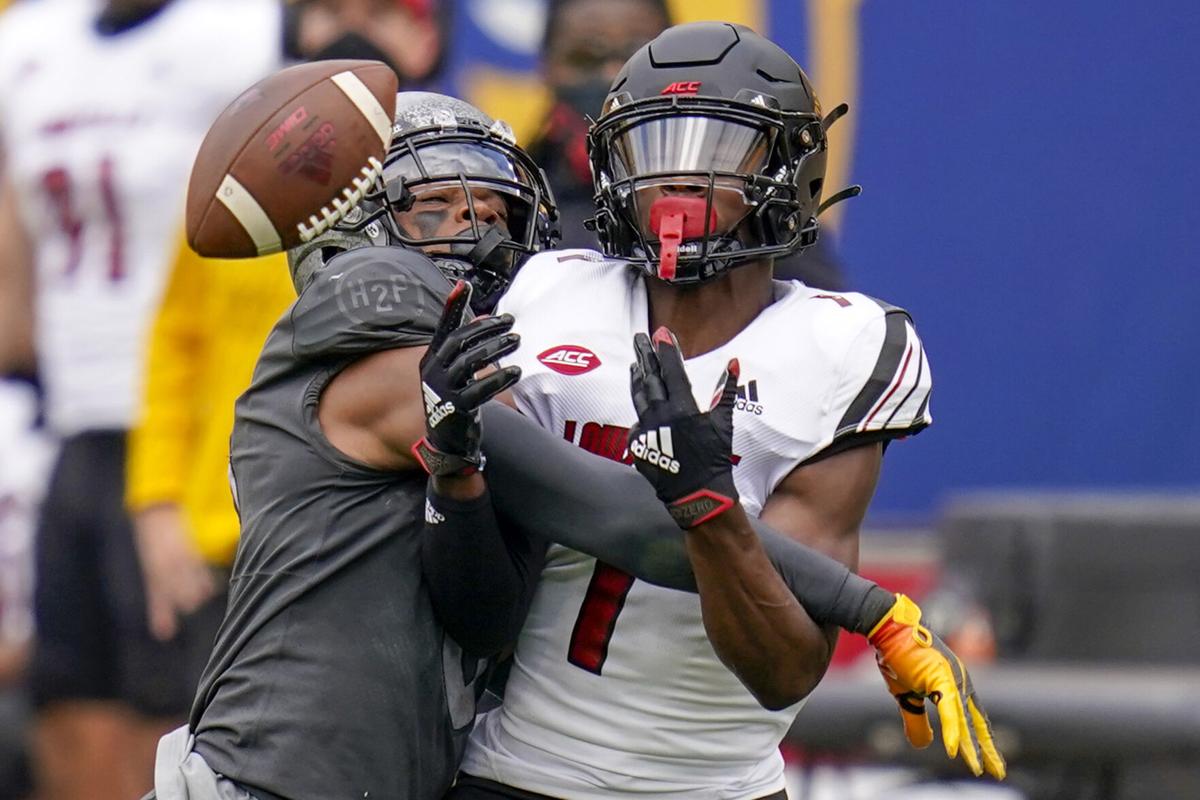 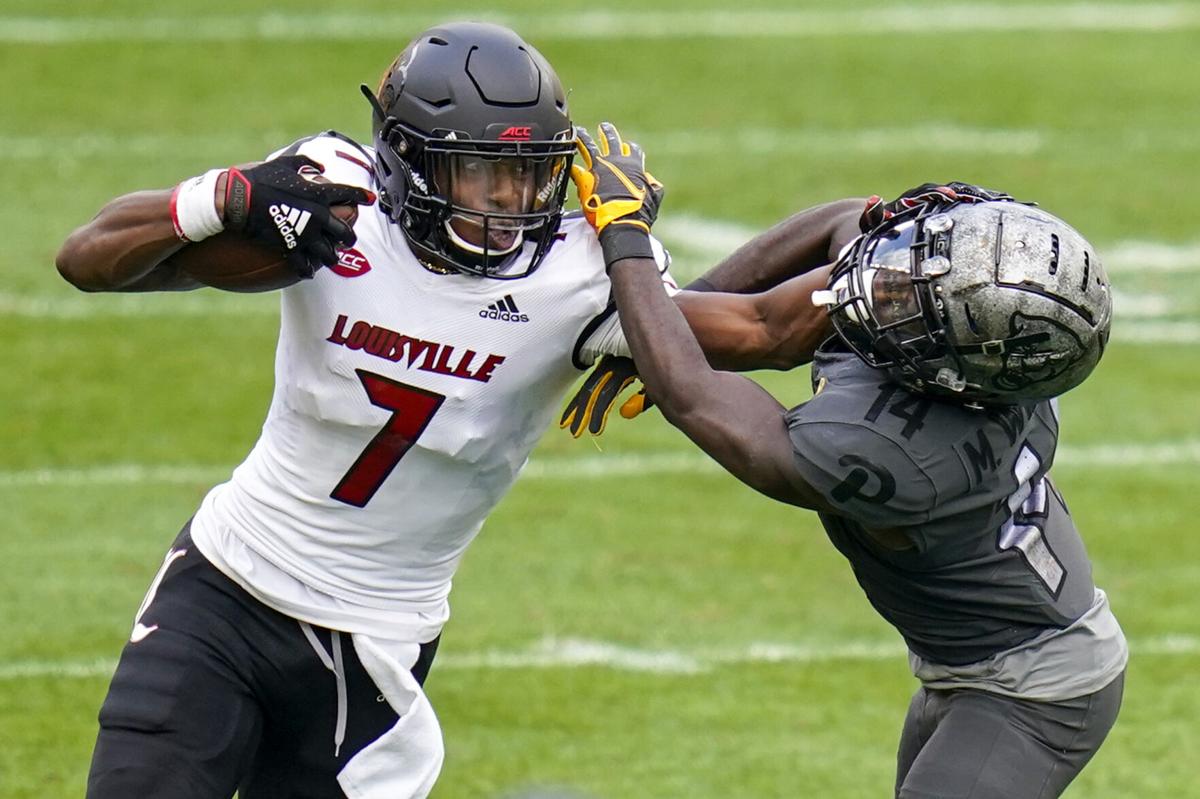 Louisville wide receiver Dez Fitzpatrick (7) stiff-arms Pittsburgh defensive back Marquis Williams (14) as he tries for more yards after a catch during the second half of an NCAA college football game, Saturday, Sept. 26, 2020, in Pittsburgh. Pittsburgh won 23-20. (AP Photo/Keith Srakocic)

Louisville wide receiver Dez Fitzpatrick (7) stiff-arms Pittsburgh defensive back Marquis Williams (14) as he tries for more yards after a catch during the second half of an NCAA college football game, Saturday, Sept. 26, 2020, in Pittsburgh. Pittsburgh won 23-20. (AP Photo/Keith Srakocic)

PITTSBURGH – Pitt’s new steel gray uniforms may have been a good luck charm as the No. 21 Panthers topped the No. 24 Louisville Cardinals 23-20 to move to 3-0 for the first time in the Pat Narduzzi era.

Pitt (3-0, 2-0) dominated the stat sheet, but the game was in doubt until Panthers cornerback Jason Pinnock intercepted Louisville quarterback Malik Cunningham with just over a minute remaining.

“They just continue to fight and find different ways to win football games, and that's what good teams do,” Narduzzi said of his team after the win.

Pitt’s defense largely shut down Louisville wide receiver Tutu Atwell, who finished the day with four catches for 37 yards and one touchdown. Atwell entered the game as the ACC’s leading receiver.

“Tutu’s eyes kind of gave it away for me,” Pinnock said of his game-clinching interception. “He came out, he kept checking outside, he tightened down his split. I knew it was – I mean, that’s their go-to guy. So we checked kind of like a cover 2 based off of a release and we got ‘em.”

Pinnock’s interception was one of several big plays by the Pitt defense, which finished the day with three interceptions and seven sacks. The Panthers now have 17 sacks across their first three games with their defensive line being as good as advertised thus far this season.

It reminds the coach of another feared defensive front in the Steel City.

“I know the Steel Curtain is Pittsburgh Steelers, but today and really (all season) they've been dominant up front,” Narduzzi said.

“We work so hard,” defensive end Patrick Jones said. “Everything we do, it’s not given to us, it’s through hard work. We strive to be the best in the country.”

The Panthers were in front 13-0 after scoring on their first three possessions in the first quarter, but Louisville would not go quietly. After a Jordan Addison touchdown put Pitt up by two scores, the Cardinals quickly responded on their first play from scrimmage when running back Javian Hawkins broke through Pitt’s vaunted defensive line to dash 75 yards to the end zone.

Suddenly, the Panthers trailed the Cardinals 17-13 midway through the second quarter.

Pitt’s next offensive drive looked to be dead two different times. On a third-and-10 at the Pitt 40 and under pressure, Pickett threw toward the sideline, where defensive back Russ Yeast was standing in front of Addison, but the freshman wideout somehow came down with the football.

“It was huge,” Pickett said of Addison’s catch. “Jordan’s a big-time player. He’s making great plays for us.”

“He's a guy that you can trust,” Narduzzi said. “He catches just about everything. I can't say enough about the play he's made as a young guy that just steps in and makes big plays.”

Four plays after Addison’s catch, facing a fourth-and-five at the Louisville 40, Pickett connected with Taysir Mack. It initially appeared Mack was tackled by Abdullah at the 25, but Mack’s knees never touched the ground. Louisville’s defense watched as Mack ran uncontested into the end zone. Review confirmed Mack was never down, and Pitt took a 20-17 lead into halftime.

“I knew he was going to have a big game, I just had to get the ball in his hands,” Pickett said of Mack, who made his first start after missing the first two games with an injury.

Kicker Alex Kessman was 3-for-3 on field goals after missing his first three attempts of the season. Narduzzi said he was “proud as heck” of his senior kicker, whose field goals were crucial in a game decided by three points.

Kessman said he began meditating again and paid a visit this week to Dr. Rosen, his sports psychologist. Kessman said it was “a long two weeks” but he was able to move past the first two games.

“I just cleared everything out,” Kessman said. “I know how to kick the ball so I told myself just go out there and kick the ball.”

After a close win over Louisville, Pat Narduzzi’s Panthers are 3-0 for the first time in his tenure as head coach. Much of that has to do with the Pitt defense.