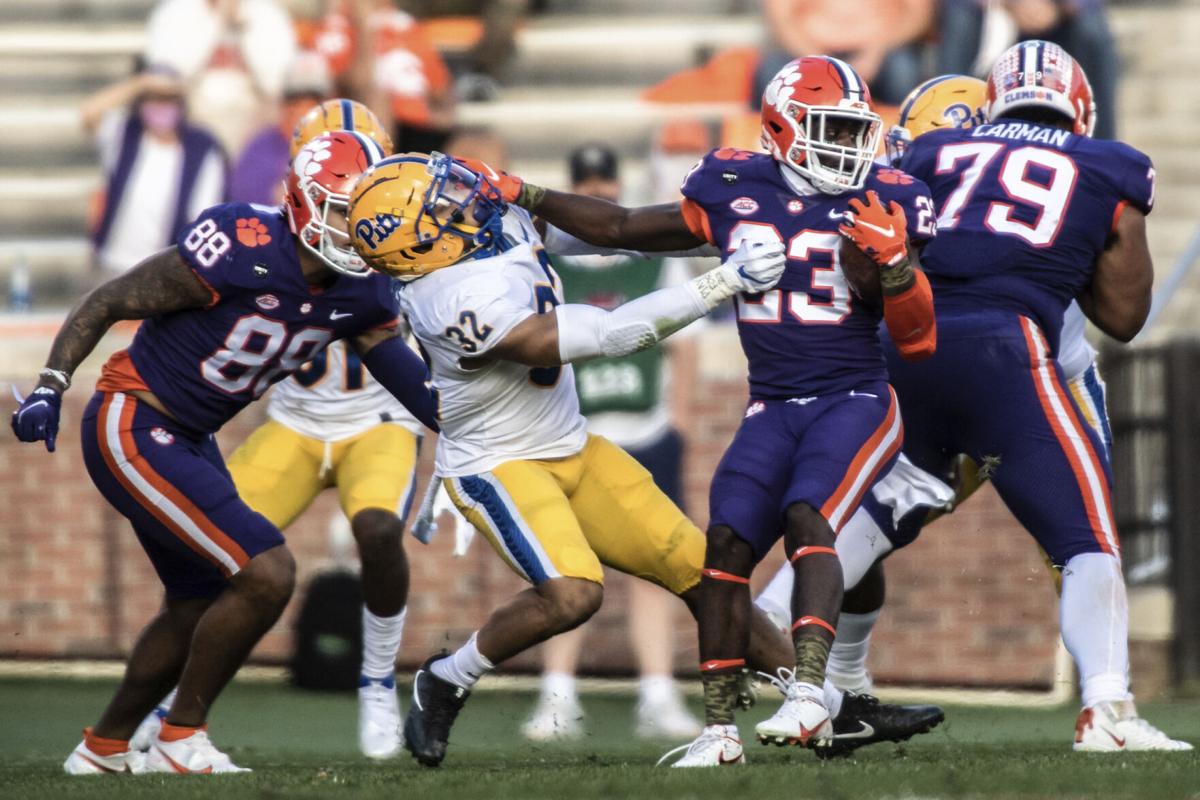 Clemson running back Lyn-J Dixon (23) pushes away from Pittsburgh linebacker Sirvocea Dennis (32) during the first half of an NCAA college football game Saturday, Nov. 28, 2020, in Clemson, S.C. (Ken Ruinard/The Independent-Mail via AP, Pool) 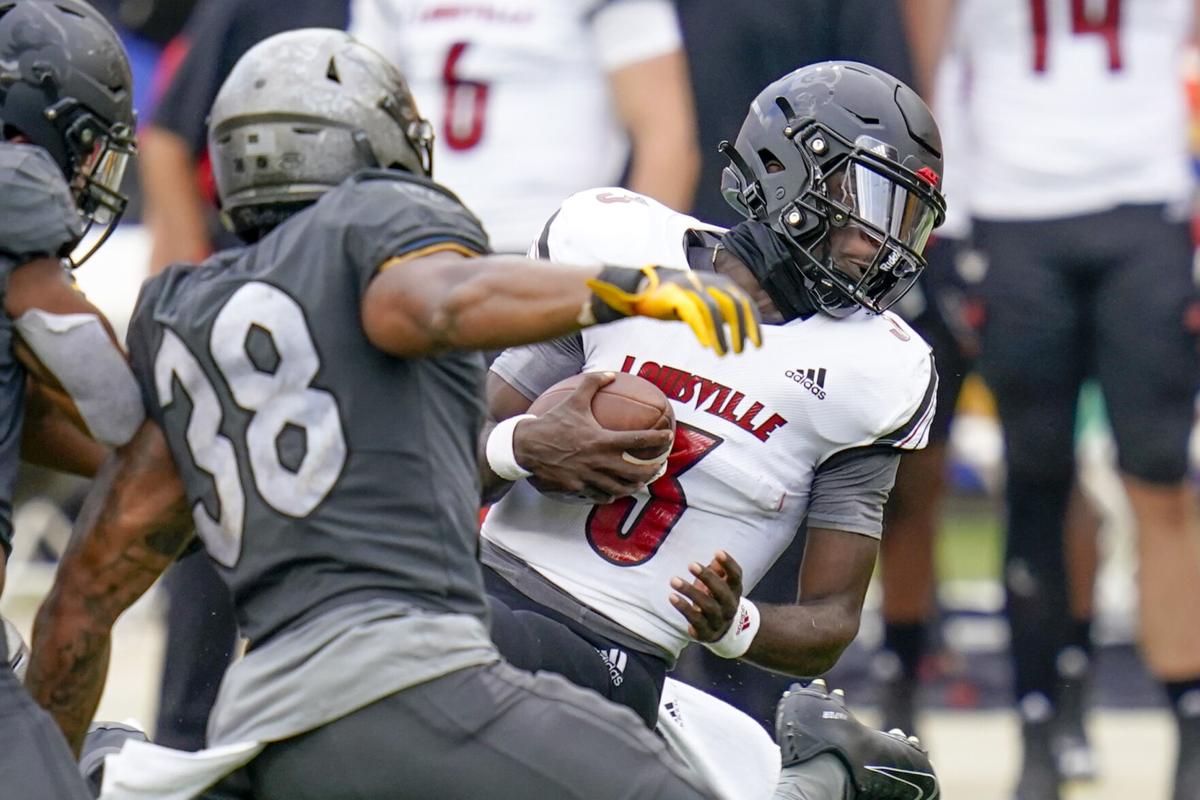 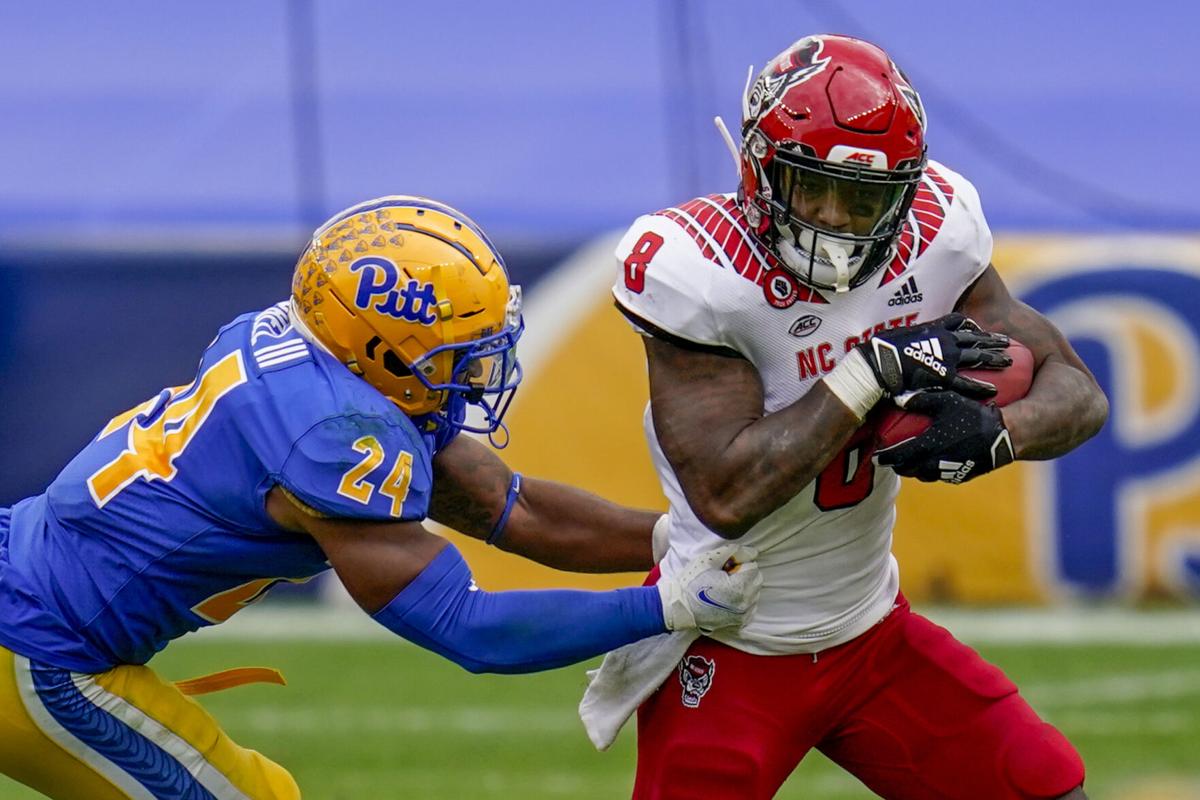 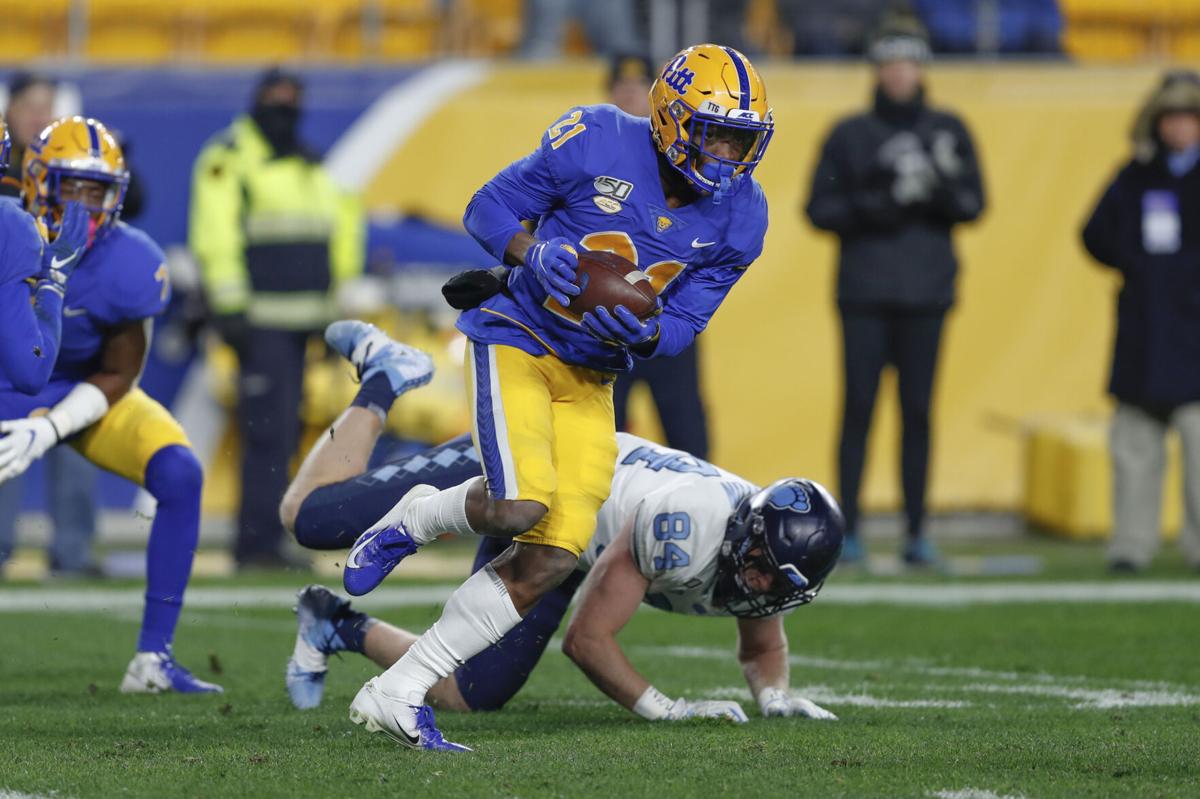 Clemson running back Lyn-J Dixon (23) pushes away from Pittsburgh linebacker Sirvocea Dennis (32) during the first half of an NCAA college football game Saturday, Nov. 28, 2020, in Clemson, S.C. (Ken Ruinard/The Independent-Mail via AP, Pool)

During the six seasons Pat Narduzzi has been at Pitt, the linebacking corps has often been overshadowed by the tough play of the front four and the playmakers in the defensive backfield.

That may change this fall, as Pitt’s group of linebackers is one of the deepest position groups on the team.

“I think we do have probably our best group of linebackers that we’ve had since I’ve been here,” Narduzzi said during the spring.

SirVocea Dennis had a breakout sophomore season in 2020. Though he started just two games, he got plenty of playing time as he became one of the Panthers’ most productive players on defense. Dennis led the team with 57 tackles, 14.5 tackles for loss and four sacks. His TFL total ranked third in the Atlantic Coast Conference and he earned third-team conference honors for his play last season.

Narduzzi said he looks at Dennis as a starter, but doesn’t know yet where he’ll be playing this fall.

“He’s a smart kid that can play anything and we’re gonna plug him in and see what he does,” Narduzzi said. “I think it depends on where we are, who’s in there, and who he can beat out, but it could be at Mike, could be at Money, could be at Star. He can play them all.”

Fifth-year senior Phil Campbell III has started 20 games at outside linebacker – he’s played both the “Money” and “Star” positions – over the past two seasons after converting from safety before the 2019 season.

Senior Cam Bright has played in 38 games for the Panthers over the past three years, starting 12 at the Star linebacker position. In those three years, he’s compiled 128 tackles, 18.5 TFLs, 5.5 sacks, three forced fumbles and two fumble recoveries.

Last year, Wendell Davis won the starting Mike linebacker position as a sophomore, but a knee injury forced him to miss the final nine games of the season. Senior Chase Pine stepped in and started the rest of the season at middle linebacker, notching 43 tackles, seven TFLs and 1.5 sacks.

The emergence of senior John Petrishen during spring ball gives the Panthers even more depth at linebacker.

The wealth of experience at linebacker and the versatility of guys such as Dennis and Campbell will give the Panthers plenty of options this season, allowing them to rotate players based on matchups and formations.

“It comes down to production. It’s going to come down to how they practice,” Narduzzi said. “We’re going to play with the three best ones.”

New linebackers coach Ryan Manalac has used the phrase “iron sharpens iron” to motivate his players, something both Campbell and Petrishen talked about during spring ball.

Also fighting for playing time at linebacker will be junior Brandon George and sophomores Bangally Kamara, Solomon DeShields, AJ Roberts and Aydin Henningham. All saw the field last year, primarily on special teams. Sophomore Leslie Smith, who missed the 2020 season due to injury, and freshman Preston Lavant round out the linebacker group.

Leadership now shifts to senior cornerback Damarri Mathis, the most experienced member of the secondary. Mathis missed the 2020 season with a non-football shoulder injury that required surgery, but played in all 27 games in 2018 and 2019, notching 15 passes defended and three interceptions over those two years.

Sophomore Rashad Battle played in every game last season and Narduzzi says he has a chance to become the nickelback in the fall.

Aliquippa native M.J. Devonshire should compete for playing time immediately, the question is at what position. Devonshire joined Pitt during the offseason after spending the past two seasons at Kentucky.

He played corner for the Wildcats, but may be used at corner, safety or nickel in the Panthers’ defense.

“We wanted to put him at the safety position this spring and then we may move him to corner, because I think he can do that as well,” Narduzzi said this spring.

“He’s a fast guy,” safety Brandon Hill said. “There’s not too many people in the ACC who can run past M.J. this year.”

Hill, Erick Hallett, Judson Tallandier and Buddy Mack will all be battling for playing time at safety. During ACC Media Days this week, Narduzzi said Hallett “has the lead” at safety right now. The junior played in 22 games over the past two seasons, starting the final four games of 2020. He started at both safety positions and made one start at corner.

Hallett missed spring practices due to an injury, leaving Hill as the leader of the safeties throughout spring drills. Hill made two starts last season, his first coming against Florida State. Hill immediately made his presence known, making eight tackles, forcing a fumble and returning an interception 50 yards for a touchdown against the Seminoles.

Other defensive backs returning to Pitt are Jahvante Royal and Hunter Sellers and the Panthers will add six freshmen at the position as well. P.J. O’Brien enrolled at Pitt in January after decommitting from Auburn. Fellow freshmen Khalil Anderson, Tamarion Crumpley, Stephon Hall, Javon McIntyre and Noah Biglow round out the defensive back room. With few veteran players returning in the secondary, freshmen may have a chance to contribute early.

While this year’s defense will have a lot of new faces, the talent and depth at each position should still lead the Panthers to having one of the conference’s best defenses.

As training camp approaches, we’ll break down the 2021 Pitt football team position by position. On Wednesday, we’re covering the offensive and defensive lines.