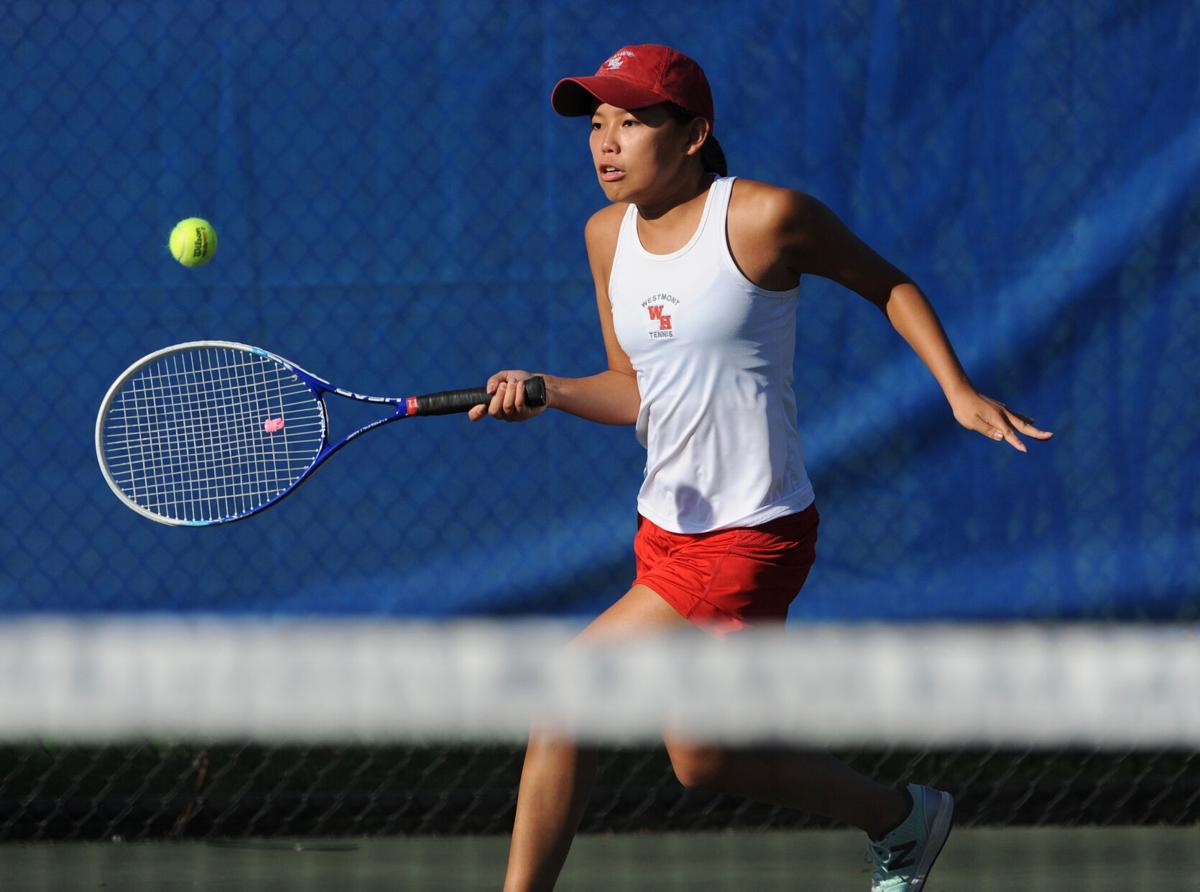 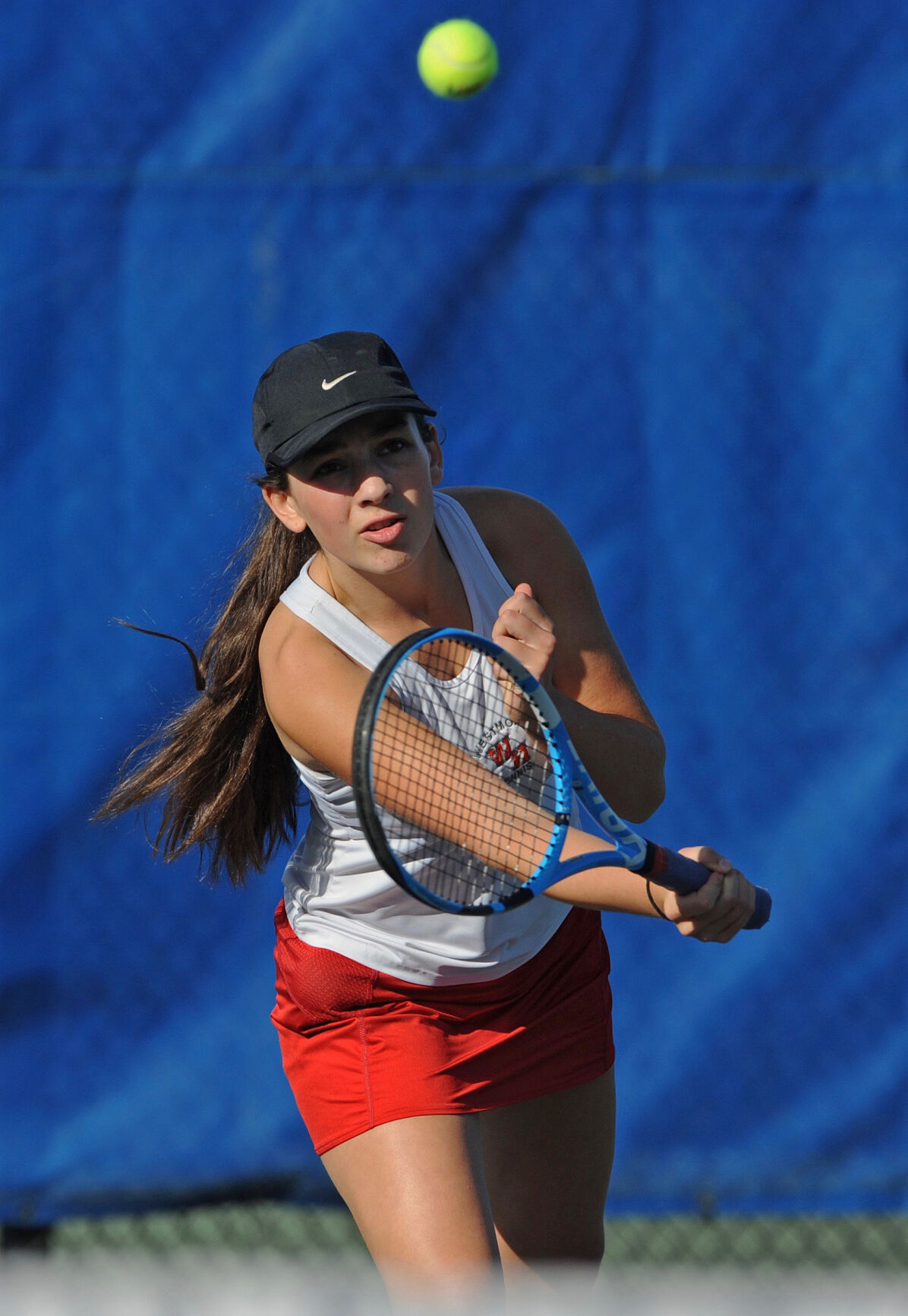 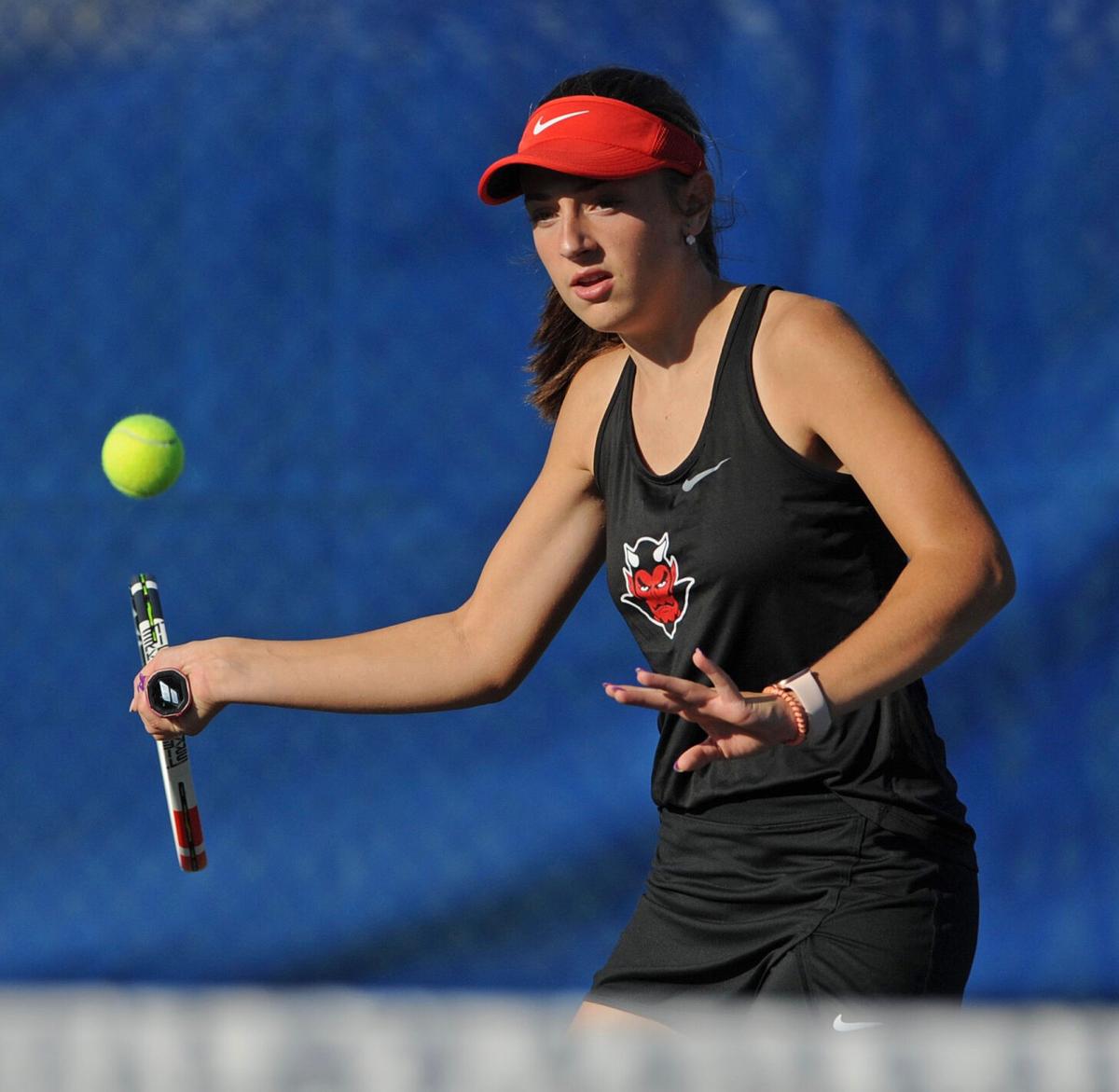 EBENSBURG, Pa. – While her teammates needed to take at least two of the four matches that she wasn’t involved in, Westmont Hilltop’s Morgan Allen did her part during Wednesday’s District 6 Class 2A team tennis championship match at Ebensburg Tennis Center.

Already up a set, Allen was locked in a competitive second set with Central Cambria’s Andie McCullough, looking at a 4-3 deficit before rallying to take three of the next four games and a 6-5 lead.

McCullough took the next game to forge a 6-all tie and force a tiebreaker, taken 7-5 by Allen.

Surrounding Allen’s 6-3, 7-6 win, Hilltoppers managed to capture two of the other four matches, claiming a 3-2 decision while notching a successful defense of their District 6 2A team crown.

“I’m proud of the girls and how they all played. I’m very proud that we are the District 6 champions.”

Allen credited the ability to rely on one of her strengths as a key factor in her second-set comeback.

“I think getting my backhand (going),” she said. “My backhand was pretty strong (Wednesday) with the drop shots.”

Then again, a critical battle between Allen and McCullough was expected by both coaches ahead of Wednesday’s match.

“She’s got the heart of a champion,” Westmont Hilltop coach Dan Fregley said of Allen. “She’s done that all year.

“Falling behind, she comes back. She fights. She claws her way back into the match. It ends up frustrating her opponent. She’s come back many times this year.”

On the Red Devils’ end, McCullough handled the tension of the match very well in the eyes of her coach.

It was the seventh straight meeting in the district final between the two programs with the Hilltoppers and Red Devils splitting the previous six.

“We’re always out to get the D6 title,” Fregley said. “That’s first on our list. The kids deserve it. Just two great programs playing each other, and it’s been a real rivalry over the past seven years.”

“Having Alyssa has just been a luxury the past four years,” Fregley said about Kush. “Obviously, we’re going to miss her tremendously, but she’s a great kid.”

Cavalier noted that anyone who draws Kush, the four-time District 6-2A singles champion, is in for a tall task.

“She’s a tournament player,” Cavalier said of the Westmont Hilltop senior. “So honestly, there’s no one that’s going to come up against Alyssa and win.”

The teams also split the doubles matches as Westmont Hilltop’s No. 1 tandem of Madison Podrebarac and Beth Buettner blitzed past the Red Devils’ Ella Persio and Julia Hoffman 6-2, 6-2, clinching the district title for the Hilltoppers as they had led 2-1 after the singles matches. Central Cambria’s Riley Baxter and Jessica Lian took the No. 2 doubles victory with a 7-5, 6-0 sweep of Olivia Berish and Lyza Johnson.

According to Fregley, Wednesday’s match could have gone to either side, just like their two regular-season meetings.

“We played them close the first two matches in the regular season,” Fregley said. “We didn’t have Alyssa Kush in the second match, so that obviously meant a lot. The first match, we played them here and it was very, very close. It went to 3-2 and two matches went into the third set, and we lost both third sets. (Wednesday), I think everything came together.”

Westmont Hilltop advances to the PIAA team tournament, where it will face the District 3 runner-up on Oct. 26 in Altoona.

The Red Devils, who produced this year’s District 6-2A doubles champions in Markovich and McCullough, end their team season at 17-3.

“My girls fought hard,” Cavalier said. “And they had an incredible season, regardless of this one loss. Title or no title, it’s an incredible team. I’m so proud to coach them.”

For the seventh straight year, the Central Cambria and Westmont Hilltop girls’ tennis teams will meet in the District 6 Class 2A championship match.