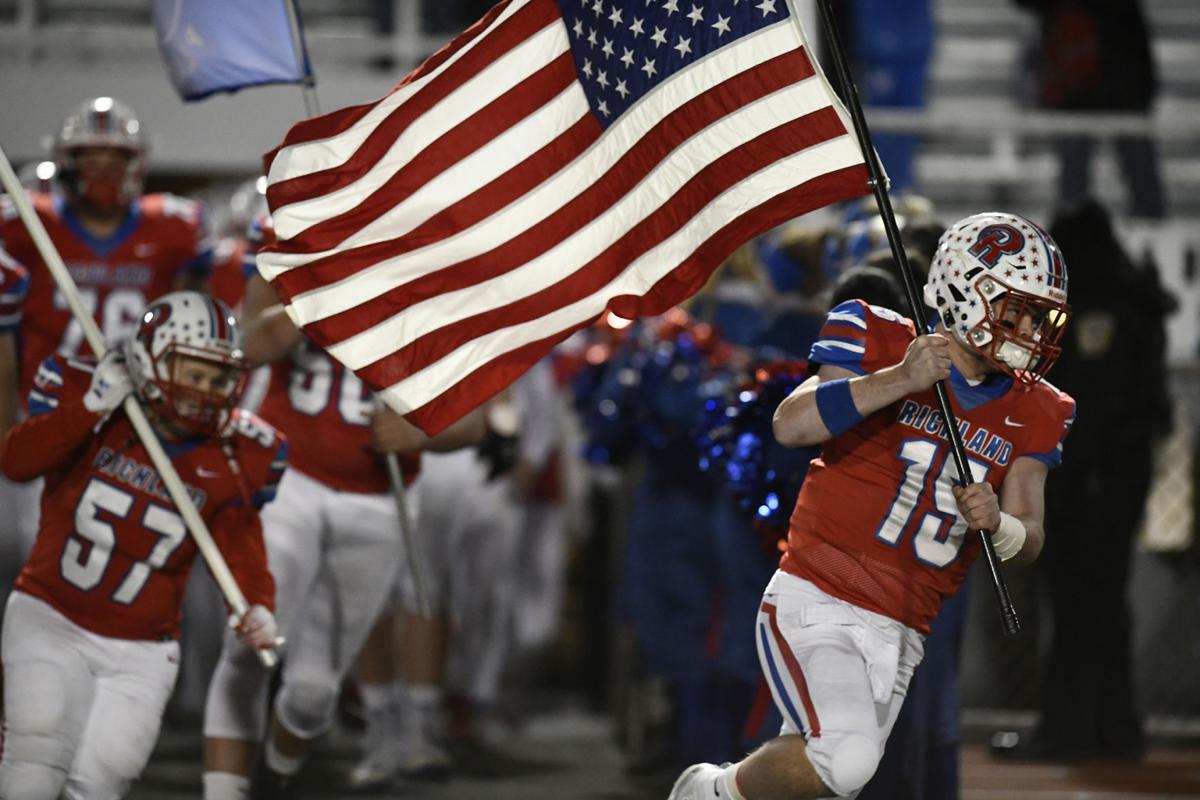 Richland's Kellan Stahl carries an American flag, as he leads his teammates onto the field in the District 6, AA championship against Ligonier Valley on Friday, November 15, 2019. 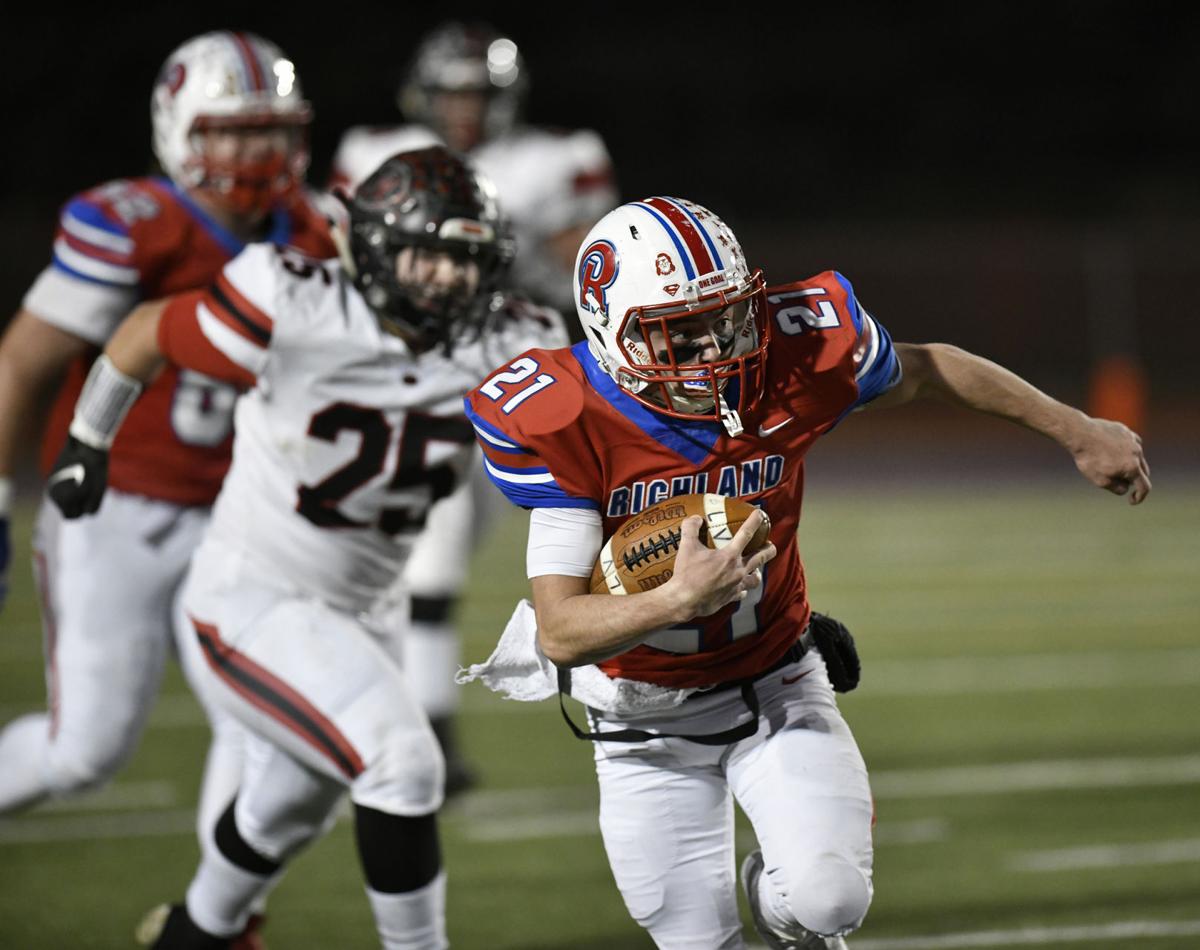 Richland Rams # 21—Allen Mangus breaks into the clear for a big gainer as Ligonier Valley's Ayden Kelley chases after him on Friday, November 15, 2019.

Richland's Kellan Stahl carries an American flag, as he leads his teammates onto the field in the District 6, AA championship against Ligonier Valley on Friday, November 15, 2019.

Richland Rams # 21—Allen Mangus breaks into the clear for a big gainer as Ligonier Valley's Ayden Kelley chases after him on Friday, November 15, 2019.

ALTOONA – Caleb Burke is more accustomed to catching passes than throwing them.

But on Friday night at Mansion Park, the Richland High School senior was pressed into quarterback duties after sophomore Kellan Stahl injured his wrist and couldn’t throw.

Burke, who is headed to Division I University of New Hampshire next year, had thrown only five passes all season prior to the District 6 Class AA title game against Ligonier Valley.

His first pass of night was intercepted by Ligonier Valley’s Jasper Arnone.

The versatile playmaker completed 5 of 8 passes for 148 yards and two touchdown passes. He rushed for a 16-yard score and caught a 12-yard TD pass from Stahl early in the game as Richland repeated as 6-AA champion with a 34-6 victory over Ligonier Valley in a battle of unbeaten, state-ranked squads.

“Coach Bailey has me taking reps during the week and I’m always prepared for anything that comes our way,” Burke said after the Rams improved to 12-0. “That’s what I did. I took on a task and we came out with a ‘W.’ ”

“First off, give credit to Richland,” Ligonier Valley coach Roger Beitel said. “They overcame a lot. They lost their quarterback and made plays. Ultimately, they capitalized on what we did. Most of those things were mistakes, just self-inflicted. It was just one of those things we couldn’t overcome.

“Any time we got momentum, got it rolling, we turned the ball over. It’s just a really tough way to end this season.”

Both teams were plagued by turnovers and miscues.

Richland had two interceptions, one lost fumble and a 77-yard touchdown negated by a penalty.

“I’m so happy for our kids and the coaches that put in the time,” Bailey said.

“Back to back. Going through the Laurel Highlands undefeated and beating a really good Ligonier team twice is certainly something to be proud of. I’m really excited for the community of Richland.”

The game became a defensive struggle between two teams that had combined to score 1,079 points (Richland 532; Ligonier Valley 547).

Richland’s defense forced a three-and-out on Ligonier Valley’s first possession and the top-seeded Rams then moved 61 yards in eight plays. Stahl hit Burke with a 12-yard touchdown pass on fourth-and-8. Autumn Facci’s extra-point made it 7-0 at 8:01.

“We got off to a fast start,” Bailey said. “We have some athletes. They did some things to keep us from getting the ball to Caleb Burke. Some other guys stepped up. They had a big interception. Then, Kellan went down with an injury that kept him from throwing the football. Momentum shifted.

“We went in at the half and kind of resorted some things. We came out and Caleb was Caleb.

Neither team found the end zone the rest of the half, as turnovers and penalties killed drives.

Richland was on the verge of making it a three-touchdown advantage when John Beard intercepted Stahl in the end zone in the opening quarter.

Ligonier Valley was stopped on fourth-and-3 from the Richland 15-yard line with 7:07 left in the half.

Richland lost a fumble at its own 27 as Dunavin Graham recovered for Ligonier Valley.

Ligonier Valley’s Sam Sheeder appeared headed to the end zone on a keeper, but Richland’s Allen Mangus recovered a fumble at the 4-yard line.

Tustin also had a 77-yard touchdown run negated by an illegal formation/five men in the backfield penalty.

The teams traded interceptions to open the third quarter.

Burke, in the game at quarterback for Stahl, was picked off by Arnone.

Burke returned the favor with his own interception of Sheeder in the end zone, halting a Ligonier Valley drive to the 15-yard line.

Burke sparked a Richland scoring drive with a 20-yard run before finding Tustin on the right sideline. Tustin eluded a defender and ran to the end zone. Facci’s kick made it 21-0 at 4:16 of the third quarter.

Ligonier Valley answered with a 64-yard drive that included a 44-yard run by Kyrie Miller (17 carries, 105 yards). Sheeder (19-72) capped the march with a 1-yard leap over the line into the end zone with 31 seconds on the third-quarter clock.

Burke teamed with Griffin LaRue on a 41-yard pass to the 11-yard line. After a false start penalty, Burke scrambled 16 yards for a score, giving him a TD run, TD pass and TD reception.

LaRue caught a 31-yard TD pass to close the scoring.