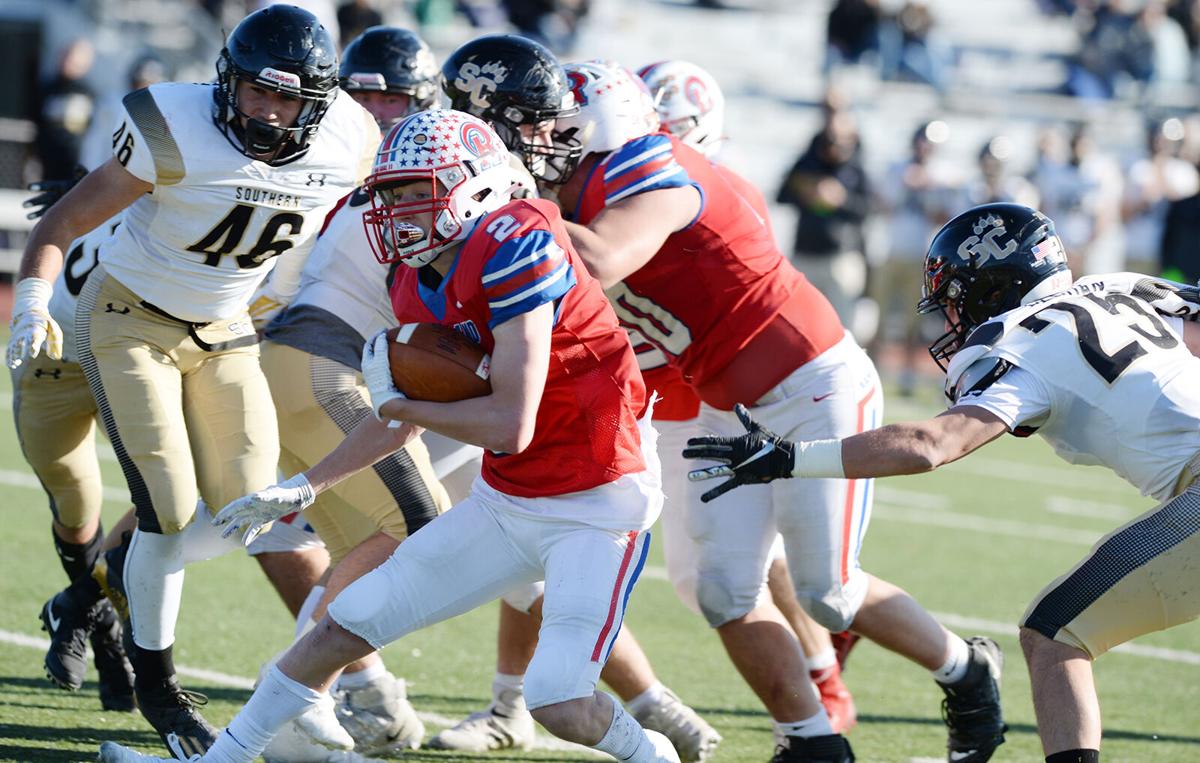 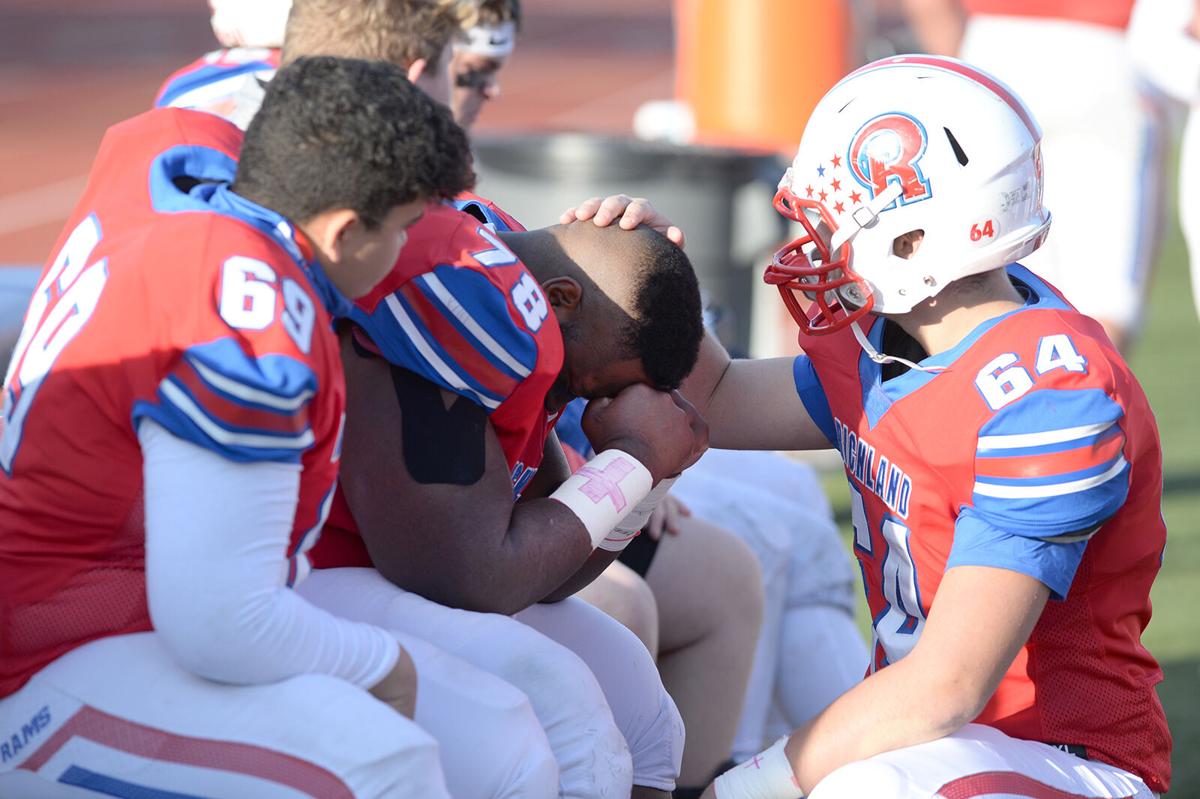 ALTOONA – His Rams coming off back-to-back scoring drives that made what looked like it was going to be a blowout a few minutes earlier suddenly interesting, Richland junior wide receiver Griffin LaRue was perplexed when his team got the ball back with under a minute to go in the first half and he saw a lone defensive back awaiting him at the line of scrimmage in press man coverage.

Ram quarterback Kellan Stahl took notice, too, and arched a pass the 6-foot-3 LaRue tapped to himself, hauled in and took it 62 yards for his second touchdown in 7 minutes against the heretofore impenetrable Southern Columbia defense, slicing a 20-point difference to five as the teams went to the locker room.

“I was very surprised,” LaRue said. “I don’t know why they didn’t switch that. My objective with one-on-one coverage is I have to catch that, I have to score.

“The feeling at halftime was like no other. The locker room was going crazy.”

Unfortunately for the Rams, they needed a lot more plays like that. The three-time defending PIAA Class AA football champion Tigers snatched momentum back in the third quarter, getting three second-half touchdowns from junior Gavin Garcia in a 57-30 state quarterfinal victory on Saturday afternoon at Mansion Park Stadium.

Richland closed an 8-2 season despite LaRue’s nine catches for 139 yards and Stahl’s 233 yards in total offense. Sophomore Grayden Lewis racked up 73 yards on six carries for the Rams, including a 27-yard touchdown jaunt.

“I’m a little disappointed. It hurts really bad because I thought this was our time,” Stahl said. “We had them, coming in at halftime. We had them on the ropes. Then we just let it slip through our hands.”

This is the second year in a row the Tigers have sidelined the Rams.

“We knew we had to play almost a perfect football game because they’re so good,” Richland coach Brandon Bailey said. “We did so many things right. It gave us a shot at being competitive. A few things happened early in the third quarter, and it kind of snowballed on us.”

The Rams got the ball to start the second half but went three-and-out. Jake Davis returned Stahl’s punt 50 yards inside the Richland 10, and Garcia scored two plays later from the 1.

Two plays into Richland’s next possession, Garcia, who rarely plays defense, jumped a route, wrestling the ball away from receiver Sam Penna and taking it back 21 yards to his second touchdown in 41 seconds, turning a 27-22 game into a 43-22 contest.

“A couple people gave some speeches before we came back out. I think that fired the team up. We put the gas pedal on and took it to them in the second half,” Garcia said.

Garcia later broke loose for 78-yard touchdown run. Richland had trouble getting he and Tiger sophomore halfback Wes Barnes off their feet the entire game; they accounted for 317 of Southern Columbia’s 357 yards on the ground on 31 carries.

The Tigers will take a 10-0 mark into their state semifinal against Philadelphia Bishop McDevitt, when Southern Columbia’s Jim Roth also will be trying to tie Berwick’s George Curry for the Pennsylvania career coaching win mark of 455.

Southern Columbia had outscored opponents 408-58 entering the contest, and one win was by forfeit. Richland was the first team all year to score a touchdown on the Tigers’ first-team defense, and it accomplished the feat three times in a little more than half a quarter.

“It was a great effort game,” Richland senior lineman Connor Rager said. “They made a few more bigger plays than us, and we didn’t pull through, but I think we did very well.”

After spotting Southern Columbia a 20-0 lead on Barnes’ three first-quarter touchdowns, Richland was only down five points when Stahl, out of kicking formation, lofted a two-point conversion pass to Jordan Ford in the back of the end zone after LaRue’s second TD.

Stahl and LaRue teamed up four times for 114 yards in the second quarter, also hooking up on a 29-yard scoring play at the 7:55 mark to cap a 12-play drive when LaRue got his defender to bite on a fake to leave him wide open.

Sandwiched around those two scores was Lewis’ touchdown run over a big hole on the left side. Lewis had a 35-yard run earlier on the possession on the same call.

It was an improbable comeback after Barnes had 117 yards from scrimmage in the opening quarter, scoring on runs of 9 and 40 yards and a screen pass covering 64.

Southern Columbia played with a short field most of the first two quarters. Richland turned the ball over on downs in its own territory the second and fourth times it had the ball. The Tigers, though, needed a 23-point third quarter to finally take control.

Both teams are very young, especially at the skill positions, so another meeting could be in the cards next year.

“I’m really proud of our senior class. They did a lot the last four years,” Bailey said. “But we’re excited. We have a lot of guys coming back. We think we’ll be very competitive.”