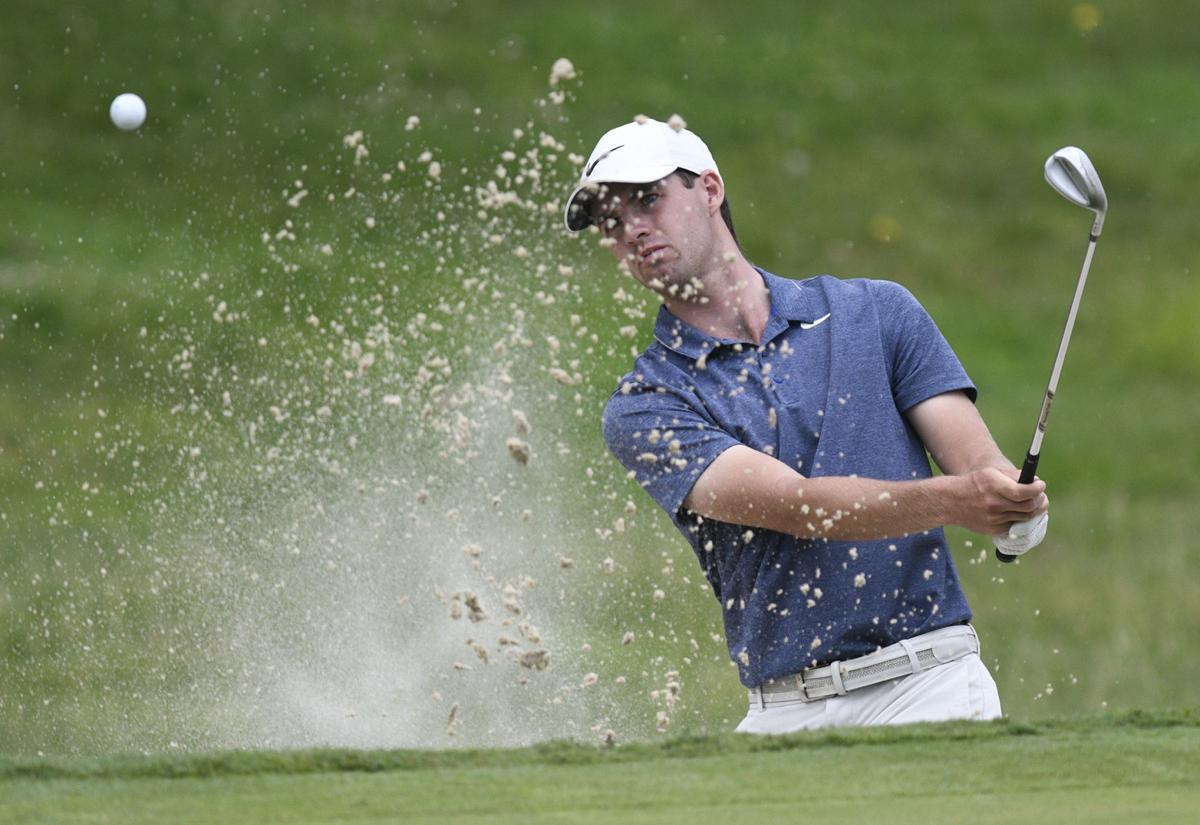 Defending champion Alex Smalley chips out of green side bunker at 11th during the final round of the Sunnehanna Tournament for Champions on Saturday, June 15, 2019.

Defending champion Alex Smalley chips out of green side bunker at 11th during the final round of the Sunnehanna Tournament for Champions on Saturday, June 15, 2019.

Alex Smalley appreciated the historic implications of his winning back-to-back titles in the Sunnehanna Amateur Tournament for Champions.

Moments after he slipped into the ceremonial green jacket and held the crystal championship cup, Smalley was informed of his status as the first player to repeat as Sunnehanna Amateur champion since Rickie Fowler won in 2007 and 2008.

Overall, only five golfers have gone back-to-back in winning the championship on the par-70 Sunnehanna Country Club course.

“It’s hard to put into words. It’s a great honor to be in great company with those four other gentlemen,” said Smalley, a Duke University product from Greensboro, North Carolina. “Anytime you can put your name next to the greats like Rickie (Fowler) and the other gentlemen who have won this tournament in back to back years is special.”

Smalley joined those “other gentleman” by finishing at 10-under 270, including a 4-under 66 during Saturday’s final round.

“It’s pretty big,” said retired Sunnehanna Country Club professional Joe Shorto, who was part of 30 Amateurs and wrote a book on the tournament’s history. “A lot of these guys now are turning pro so quick. Smalley graduated this year and he’s turning pro this summer.

“It’s pretty unusual. It’s great to see. Now the field is all collegiate players. Before half the field used to be mid-Amateurs.”

Shorto said repeat champions probably won’t be the norm in the future.

In fact, Smalley won’t be back to defend again next year.

“I’ll turn pro at the end of September and do Q (qualifying) school for Web.com (Tour),” Smalley said.

Family support: Smalley’s mother Maria followed him on the course throughout the past two Sunnehanna Amateurs.

“My mom and dad try to go to as many golf tournaments as they can,” Smalley said. “My mom was with me last week at the Palmer Cup in Arkansas. She made the trip over here with me. I had to convince her to come back. She wasn’t sure about it. I’ve had a pretty tough stretch the last 21/2 weeks and haven’t been home.”

On Saturday, his grandparents, Ruby and Mike Lyons, of Coshocton, Ohio, greeted him on the 18th green.

“It’s great having family up here and having my grandparents up here,” Smalley said. “It’s special to share another one with them.”

Role reversal: A photograph of University of South Carolina’s Scott Stevens autographing a cap for Jonathan, 9, and Meara, 7, Gleason appeared in Thursday’s Tribune-Democrat.

Jonathan Gleason returned the favor by signing a copy of the newspaper clipping and presenting it to Stevens.

Growing gallery: The crowds throughout the week appeared larger than in past years, especially on Saturday.

As many as 300 people surrounded the 18th green as the leaders finished their final round. A significant portion of those fans followed the leaders throughout the day.

“It was good,” runner-up Garett Reband said of the crowd. “I’ve never been to Pennsylvania, so I didn’t know how many people were in the area. Johnstown is kind of small. It was nice to see the big turnout.”

Smalley has been around to see two large gatherings on 18 in as many years.

“We don’t get to play in front of a whole lot of people unless it’s the national championship,” Smalley said of the college game.

“It’s nice to have a gallery out there that’s not only rooting for me but is rooting for everybody.

“They just want to see good golf. It’s nice to have the support from the fans and support from my family. There were a couple players who stuck around to congratulate me. That was special. They didn’t have to do that.”

The rising senior used to be a two-sport athlete for the Bulldogs, playing safety and special teams on the football team as a freshman in 2015.

After his freshman season, Nicholas opted to concentrate on golf as his college sport.