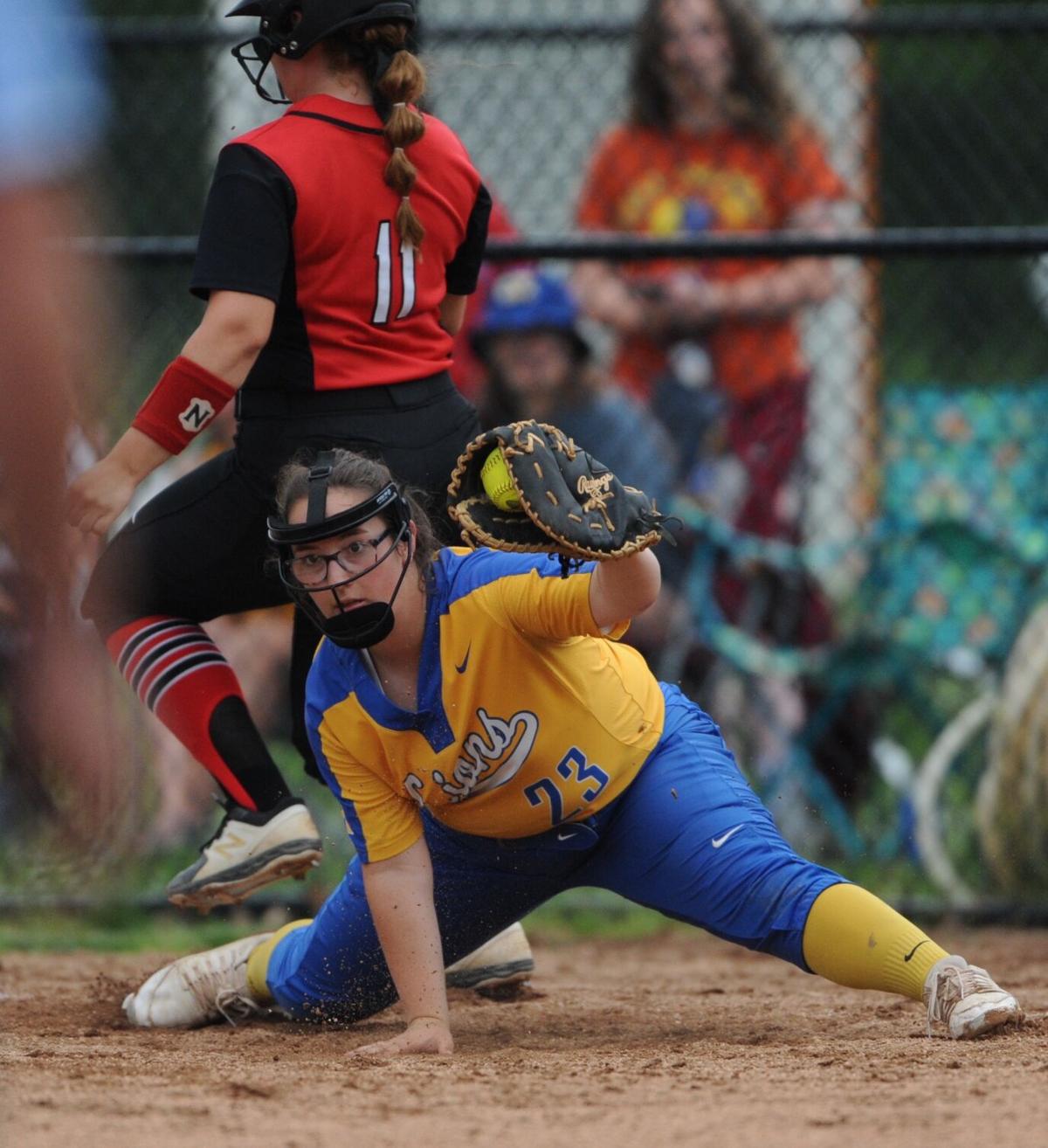 Chestnut Ridge first baseman Isabella Giovanelli, right, puts out Ligonier Valley’s Eden Krouse at first base in the top of the fifth inning of a PIAA Class 2A quarterfinal playoff at Mount Aloysius College in Cresson, PA., Thursday, June 10, 2021. 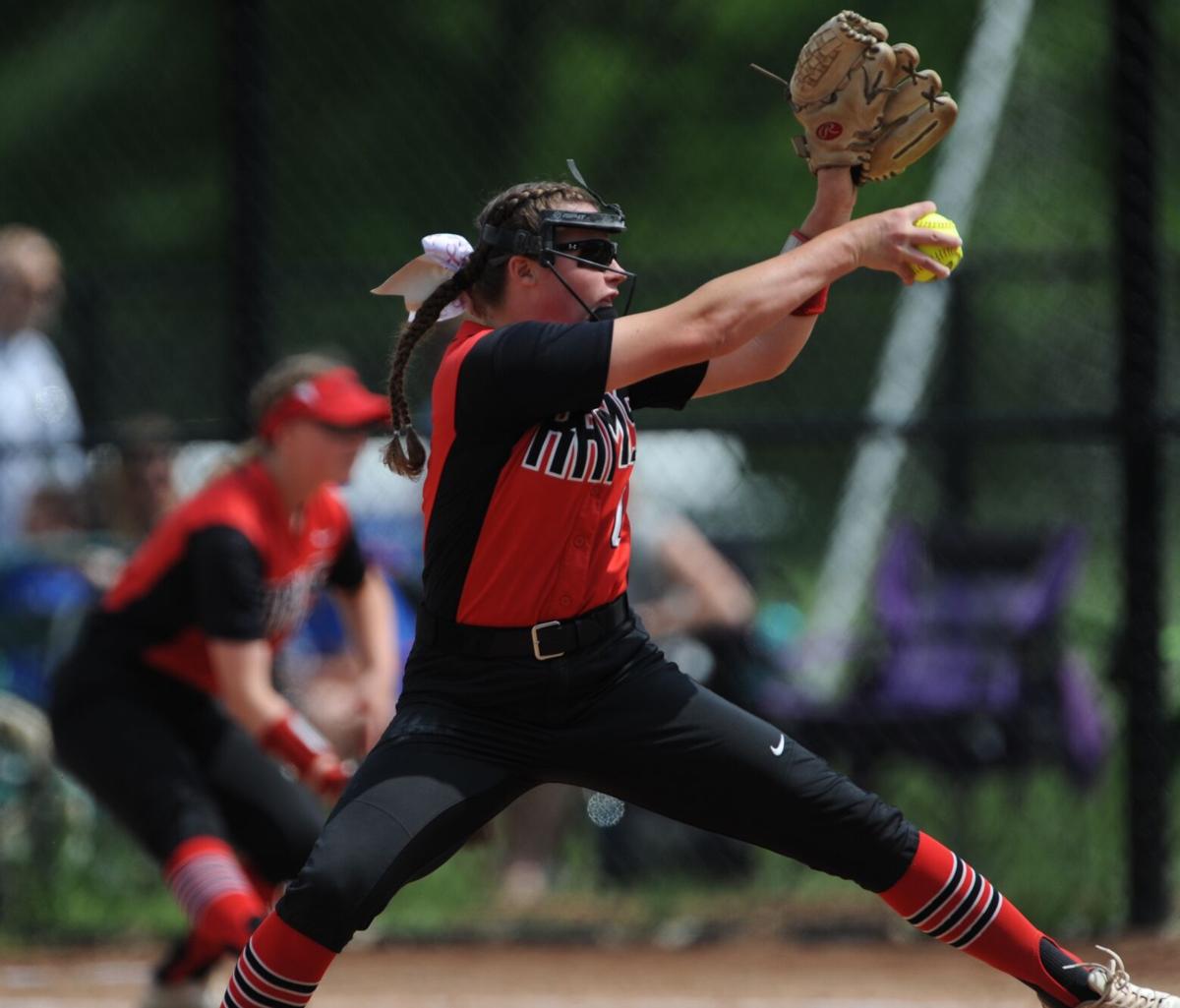 Ligonier Valley Maddie Griffin throws to a Chestnut Ridge batter in the bottom of the first inning of a PIAA Class 2A quarterfinal playoff at Mount Aloysius College in Cresson, PA., Thursday, June 10, 2021.

Chestnut Ridge first baseman Isabella Giovanelli, right, puts out Ligonier Valley’s Eden Krouse at first base in the top of the fifth inning of a PIAA Class 2A quarterfinal playoff at Mount Aloysius College in Cresson, PA., Thursday, June 10, 2021.

Ligonier Valley Maddie Griffin throws to a Chestnut Ridge batter in the bottom of the first inning of a PIAA Class 2A quarterfinal playoff at Mount Aloysius College in Cresson, PA., Thursday, June 10, 2021.

CRESSON – A game that started nearly two hours late due to inclement weather ended nine outs prematurely even after a road trip to a second site on a rainy Thursday afternoon.

Ligonier Valley officially edged Chestnut Ridge 1-0 in five innings in a game that began at Mount Aloysius College and concluded without a pitch ever being thrown on the artificial turf at Central Cambria High School.

Ligonier Valley coach Mark Zimmerman said it was a tough way for his District 7 third-place team to win and an even more difficult manner to lose at PIAA Class 2A quarterfinal.

“It’s hard,” said Lazor, fighting back tears as reporters held an umbrella over his head in a steady rain. “They put a lot of time in.

“We work all winter, spring, summer, fall. They believed in themselves and did something no one ever did in the program. It hurts when it’s just finished that quickly without you having any control over it.

“Just the way the game went. But it hurts. It hurts a lot worse than regular losing for sure.”

Ligonier Valley will carry a 21-2 record into the state semifinal round against District 10 runner-up Union City, a 6-5 winner in 10 innings over District 7 champion Laurel.

“It has been crazy,” Ligonier Valley’s Zimmerman said. “When we showed up this morning, we said, ‘Boy, it rained here. There is a tarp sitting here and the field is not tarped.’ We thought maybe it wasn’t as wet as we thought. Then it started raining and everybody jumped in and tried to cover the field. We did get the field covered.”

The field crew did an excellent job preparing the surface for play once the tarp was removed.

“Finally, we got started, and it looked like the weather was going to be smooth sailing,” Zimmerman said. “Then, in the fourth and fifth inning it started threatening again. Then it really opened up.”

Griffin struck out eight of the first nine Chestnut Ridge batters. She only allowed one hit while striking out 11 and walking one.

She fanned six including a scoreless sixth inning, which didn’t count when play reverted to the last complete inning, the fifth.

“We came up here against one of the best pitchers in the state,” Lazor said of Griffin. “I don’t know if her ball does boomerangs in there, but no one can touch it anywhere.

“They battled in there. Zoie matched her pitch for pitch. the difference came that they got a walk and then a double. We hit a double and then got walked.

Ruby Wallace ripped a two-out double off the fence in left-center to drive in Bella Vargulish, who reached on a walk. Ligonier Valley led 1-0 in the fourth.

Chestnut Ridge center fielder Lauryn Calhoun broke up the perfect game with a solid double to center field with one out in the fifth inning. Griffin walked Mya Wingard but fanned the next two batters to end the inning.

“It hurts,” Lazor said. “But after five innings they were winning 1-0. There is nothing illegitimate about it. But when it gets cut short and you don’t get that final go, it honestly hurts and you wonder. You always want to go down swinging the last bit. But the weather didn’t cooperate. We weren’t going to play on that other field (Mount Aloysius) and it didn’t stop raining here (Central Cambria).”

Dunlap pitched a clean inning in the top of the sixth at the Mount, working around a walk and stranding a runner at second after a sacrifice bunt.

But in the bottom of the sixth, Chestnut Ridge’s Alecsis Mowry was at the plate when the rains picked up and play was halted at 4:43 p.m.

As the downpour drenched the field, an announcement was made that the game would be finished at Central Cambria High School approximately 8 miles away.

But steady rain prevented play from resuming for more than two hours. Coaches, game officials and PIAA representatives met at 6:45 p.m. and announced the game would not resume and was official through five innings.

“I’ve sat at a site for a while,” Zimmerman said. “We’ve sat at rain delays at times. But never where they said, ‘We’re going to load you up and take you to another site.’”

The drive west from Cresson to Ebensburg included a lot of gazing at weather-related apps on smart phones.

“On the way over, everybody is looking at their phone and you could see it was wall to wall rain for the next 21/2 hours,” Zimmerman said. “I understand what they were doing.

“It’s hard to win this way.

“It’s really hard to lose this way. Also, if you pick up and things aren’t right, and you lose it on a girl slipping or falling down, that’s not going to be a happy ending either.”

Punxsutawney holds off Cambria Heights' comeback bid in 3A

DuBOIS – With Karli Storm batting and her team down big, Cambria Heights senior pitcher Paige Jones stood on second base, clasped her hands to…