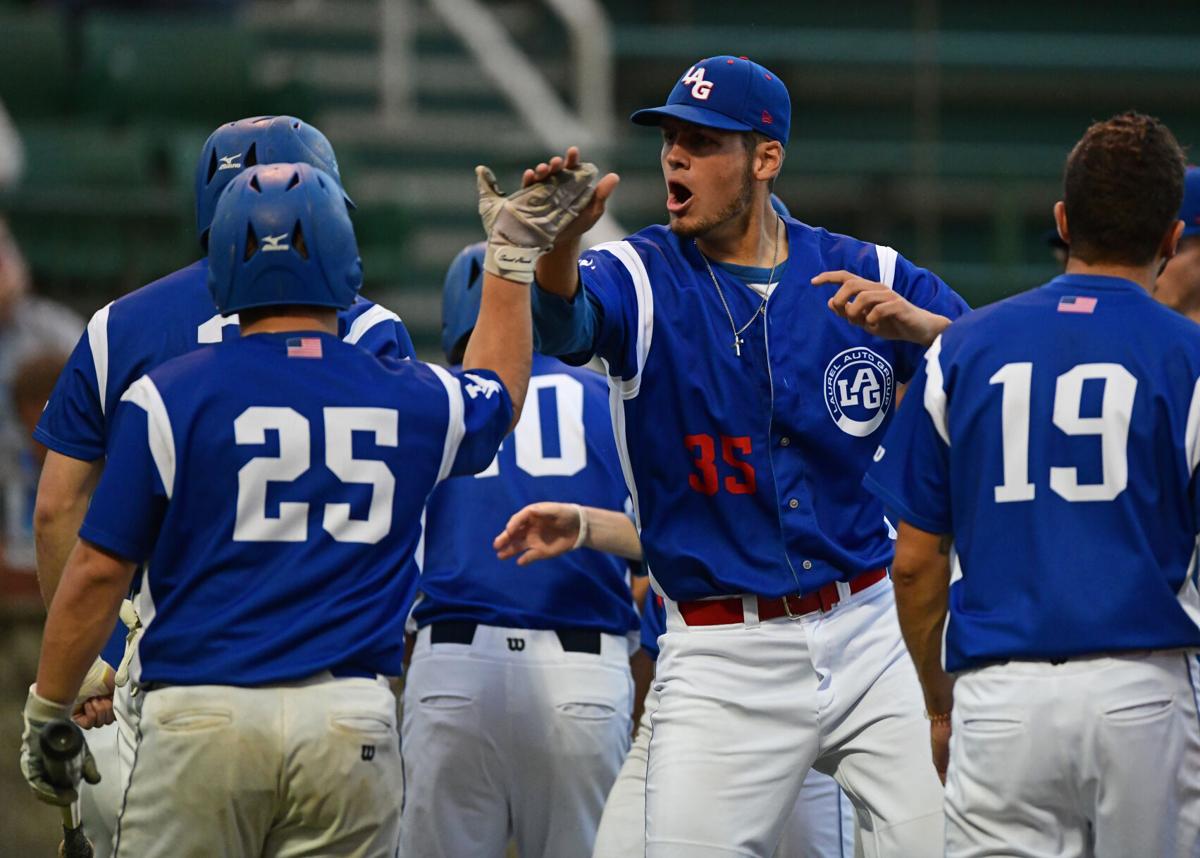 Laurel Auto Group’s Nick Langenese congratulates teammate Austin Brown (#25) after he and two others scored on a 3-run triple by teammate Austin Price in the top of the fourth inning of a Johnstown Collegiate Baseball League semifinal playoff game at Sargent’s Stadium at the Point in Johnstown, PA., Tuesday, Aug.4, 2020. 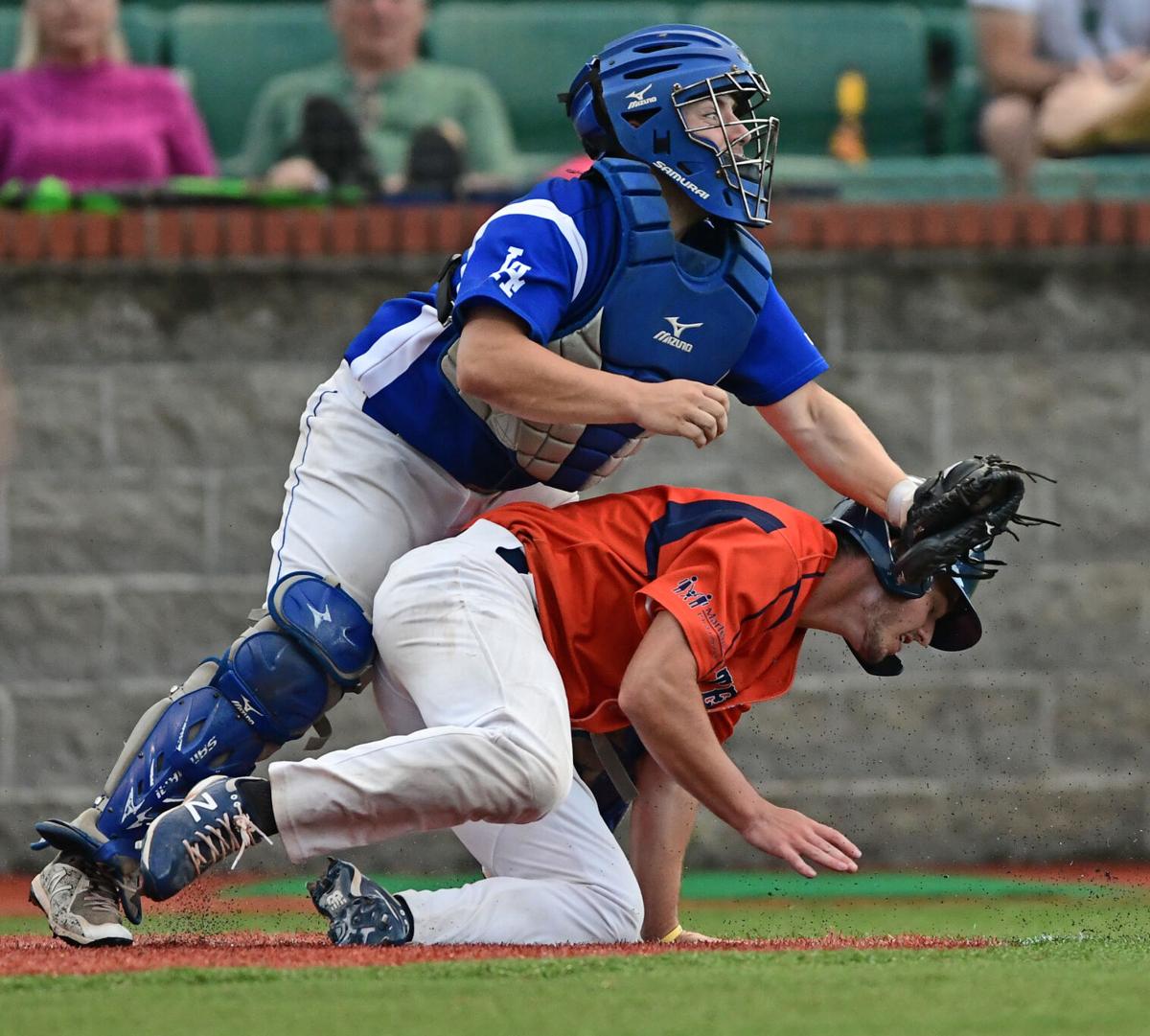 Laurel Auto Group catcher Austin Brown, left, tags out Martella’s Pharmacy Jake Ansell, who tried to score on a triple by teammate Brian Yetter in the top of the first inning of a Johnstown Collegiate Baseball League semifinal playoff game at Sargent’s Stadium at the Point in Johnstown, PA., Tuesday, Aug.4, 2020.

Laurel Auto Group’s Nick Langenese congratulates teammate Austin Brown (#25) after he and two others scored on a 3-run triple by teammate Austin Price in the top of the fourth inning of a Johnstown Collegiate Baseball League semifinal playoff game at Sargent’s Stadium at the Point in Johnstown, PA., Tuesday, Aug.4, 2020.

Laurel Auto Group catcher Austin Brown, left, tags out Martella’s Pharmacy Jake Ansell, who tried to score on a triple by teammate Brian Yetter in the top of the first inning of a Johnstown Collegiate Baseball League semifinal playoff game at Sargent’s Stadium at the Point in Johnstown, PA., Tuesday, Aug.4, 2020.

Veteran Jake Swank beat out a throw to first base in a close call to avoid a potential inning-ending double play at Sargent’s Stadium at the Point. The go-ahead run scored on the play and Laurel Auto closer Sam Newcomer retired Martella’s Pharmacy in order in the bottom of the inning as LAG won 5-4 in Game 5 of the Johnstown Collegiate Baseball League semifinal series.

“I really struggled all week and everyone picked me up,” said Swank, who had been a AAABA Tournament pick-up player for Martella’s Pharmacy the previous two years. “I thought, ‘All I wanted to do was put the ball in play.’ I didn’t exactly do what I wanted. But I did the job.

“That’s all that matters. All I care about is we won.”

“It is tough to take not winning it this year,” Martella’s manager Kerry Pfeil said. “We believe that (advancing to the final series) is part of the tradition here. However, we’ve said it all summer, with the COVID-19 pandemic, we’re blessed to be out here developing relationships.

“The hardest thing about your last game, win or lose, is you’re saying good-bye to young men,” Pfeil added. “We were very blessed and I’d like to thank (JCBL Commissioner) Donnie Stanton, the city, my guys and the other teams. We were lucky. We came out of this with zero cases of COVID. What we were doing here worked and we’re prepping young men for their college seasons – hopefully.”

The series went back-and-forth, with Martella’s posting a 12-2 mercy-rule victory in Game 1. Laurel Auto bounced back with a 4-3 win in the second game.

Martella’s used a late two-run homer and a two-run double to win Game 3 by a 6-5 score. Then Laurel plated 11 runs over the final two innings in a wild 15-8 win in which each team had 15 hits.

“People have talked to me and said, ‘Your team has so much fun and so much heart. They never quit,’ ” Laurel Auto manager Jim Skiles said. “The last two nights, you just looked in their eyes and knew they were going to compete no matter what.

“We said that if we played smart, played small ball, we could compete with anybody,” Skiles added. “We have good team speed. We’re deep in pitching. They’re hot right now. We just peaked at the right time.”

In the decisive fifth game, Martella’s Pharmacy outhit Laurel Auto Group 11-4. Each team’s pitchers had solid stretches on the mound and a few lapses that led to runs.

Martella’s Pharmacy started the game with an offensive barrage that included four straight hits, including Adam Cecere’s two-run homer onto the concourse near the right field stands. Brenden Lavely recovered to limit the damage to a 2-0 deficit.

“That was what we had set up,” Skiles said. “Lavely got roughed up the first night and he wanted some revenge. He was well rested and we gave him the start.”

Martella’s starter Jake Ansell was sharp early. He retired eight of the first nine batters he faced, with the lone runner reaching on an error.

Ansell struck out five straight in the second and third innings. But Laurel Auto’s offense came to life in the fourth, sending eight men to the plate and scoring four runs.

“The four-run inning in the fourth, the walks hurt us,” Pfeil said. “He jammed a guy and he was able to squeak a ground ball past our first baseman that led to a big inning.”

Chris Miller led off with a double down the line in left field. With two outs, three straight batters walked to force in a run. The No. 8 hitter in the lineup, Austin Price, doubled down the line in right field on a 3-2 count. With the runners in motion, all three crossed the plate to give Laurel Auto a 4-2 advantage.

Troy Emert had an infield single, moved up on a ground out and scored on pinch-hitter Jake Felton’s two-out single to left field, pulling Martella’s within 4-3 in the eighth.

“Jake Felton has battled through an arm injury this year but we do not hesitate to bring him in to hit,” Pfeil said. “He’s had great at-bats this entire season. We were fully confident he was going to create something there.”

Laurel Auto was one out away from clinching in the bottom of the ninth, but Grant Norris drew a walk and Zach Mancz doubled off the wall in left field, plating Norris with the game-tying run.

In the top of the 10th, Chris Miller was hit by a pitch, took off for second and moved to third when a throw went into center field as Dallas Hite drew a walk. Cleanup hitter Swank hit a grounder to second baseman Ansell and Martella’s recorded the out at second. But Swank beat Grant Norris’ throw to first, avoiding an inning-ending double play while also driving in the go-ahead run.

“We had the momentum there. It looks like we get a double play. We don’t get it,” Pfeil said. “Where we were at in our order, we were asking some guys with minimal at-bats to do something. LAG doesn’t make a lot of mistakes. They’re a tough team.”

Laurel Auto reliever Nick Lagnese went five innings with four strikeouts and one walk. He worked out of a second-and-third jam when he entered the game with no outs in the fifth.

Sam Newcomer closed the game with a perfect 10th inning, including a strikeout and two grounders to shortstop Tyler Suder, the last one setting off a celebration on the field.

“Me and Lags (Lagnese) have been here four years,” Swank said. “This is the first time we’ve won a playoff game (this year). To actually win against a team that has so much talent, everybody knows they’re way more talented than us. But to pull it off is just special.”

“We just know we might not have as much talent as them or PC, but we just come together and have heart and see where that takes us,” Swank said.

Pfeil had no doubts about Swank’s talent level. As the Laurel Auto player walked off the field, Pfeil called to him and put his arms around the player’s shoulders.

“Nobody better deserves this than you,” Pfeil said, hugging Swank. “I’m so happy for you.”

Laurel Auto Group won a wild slugfest against Martella's Pharmacy 15-8 on Monday in the Johnstown Collegiate Baseball League semifinal round.