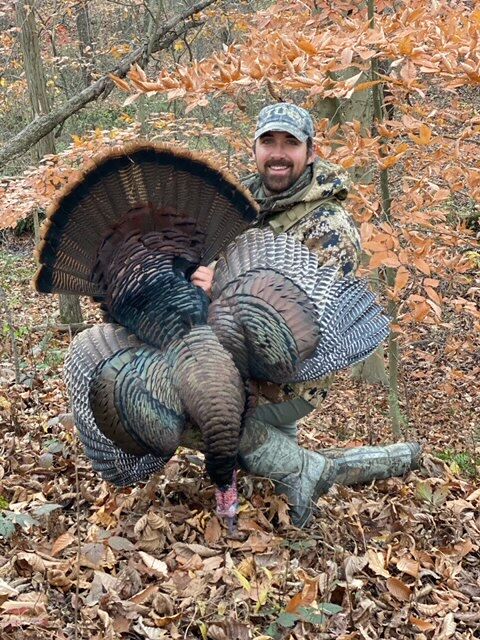 Travis Thompson, of Washington County, is shown with a fall gobbler he harvested in Pennsylvania in November 2020. 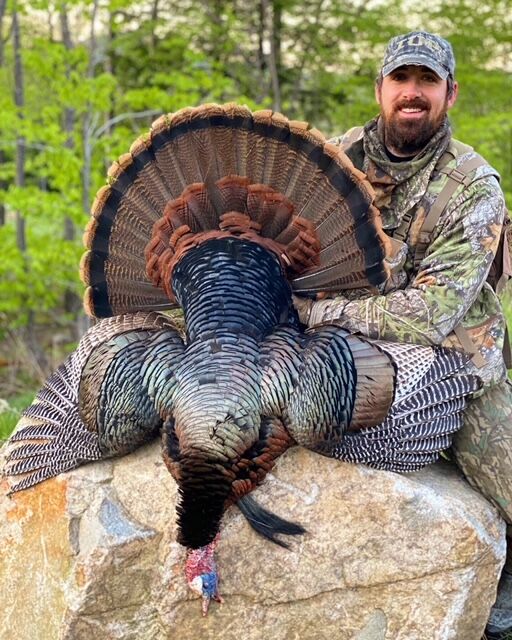 Travis Thompson, of Washington County, is shown with a spring gobbler he harvested in New Hampshire in May 2020.

Travis Thompson, of Washington County, is shown with a fall gobbler he harvested in Pennsylvania in November 2020.

Travis Thompson, of Washington County, is shown with a spring gobbler he harvested in New Hampshire in May 2020.

When Travis Thompson watched a wild turkey fold up from a blast from his Benelli 12-gauge shotgun last Wednesday in Arkansas, he was elated that he had bagged a spring gobbler.

What made that bird special was the fact that he had added Arkansas to the list of 48 other states where he has harvested a wild turkey, becoming one of only 15 hunters in the country to complete the National Wild Turkey Federation’s U.S. Super Slam, that is, taking a turkey in every state but Alaska.

Although the NWTF only requires a turkey of each of the four subspecies of any sex to earn the award, the 33-year-old Davidsville native upped the ante by targeting only mature gobblers, and went into this year’s season needing birds in Mississippi, Delaware, Arizona and Arkansas – completing the task in just five weeks.

“It’s definitely my passion,” said Thompson. ”I lose a lot of sleep, and it’s expensive. I don’t even want to know how much money I spent on licenses, rental cars and plane tickets, but to me it’s worth every penny.”

Most every hunt for Thompson was unguided on public ground, except for Hawaii, where most of the land is private. Some hunts required a temporary lease.

“You meet a lot of good people that kind of open their doors and give you some information that is very valuable, and that you can run with,” Thompson said. “It’s neat to see different parts of the country that I never would have seen if it weren’t for the wild turkey.

“People ask, ‘What was your favorite thing?’ Actually just meeting the people and seeing the places. Shooting turkeys on an active volcano in Kona, Hawaii, to shooting birds in a snowstorm out in Wyoming. I’ve pretty much seen it all.”

Thompson, who now lives in rural Washington County, shot his first turkey in Pennsylvania when he was just 12.

He and his dad Robert Thompson began harvesting birds in Maryland some 20 years ago as a way to extend their hunting season in the spring.

In 2006, his parents treated him to a South Dakota hunt as an incentive to graduate from Conemaugh Township Area High School with good grades.

He tagged a gobbler there, and another in Texas as a college graduation gift from his folks.

When he tried his luck in Ohio in 2009, Thompson met a hunter named Clyde Neely, of Kingwood, Texas, who needed just three states to earn the U.S. Super Slam (he got it in 2012). Thompson was not aware of the NWTF’s award and after speaking to Neely, said, “I just started thinking, like, ‘Hey, that’s something I might entertain doing.’ I like to set goals.”

He admitted that at the time he didn’t think it would actually come to fruition, but after the following year, he decided, “I’m going to start this journey.”

Thompson soon took a gobbler in West Virginia, and a few more in other nearby states. As his confidence grew, he managed to harvest birds in seven more states in just one spring. From there, the mission became quite serious. Merriams, Osceolas, Rio Grandes and Easterns in all types of terrain from Georgia to California fell to Thompson’s Benelli. Although he was in no hurry to cross states off of his list, his goal was achieved in just eight years.

“It wasn’t by any means being the quickest to do it,” he said.

Thompson admits there were no secrets or special tactics to his success.

“To be honest, I just put pretty much everything into turkeys,” he said. “If it’s not turkey season, I’m studying how they behave, and am always listening to podcasts.”

Thompson said many people call him lucky, but he admitted it’s all preparation and persistence.

He studies the last five years of harvest data, pours over maps, searches for contacts and plans to arrange time off of work.

It all comes down to perseverance.

“If I’m not hunting, I’m thinking about it,” he said. “I’m scouting and practicing calls.”

That, and experience has made him the turkey hunter he is today.

“I’m not the world’s best caller, and I think being a woodsman and knowing how to read terrain and read the different situations – that’s what kills more turkeys than anything,” he said. “That, and persistence.”

He added, “It’s just mental toughness you got to have. How bad do you really want it?”

Of the four varieties, Thompson admitted that Merriams were his favorite birds to hunt.

“They gobble the most of the four types of subspecies, and act like a turkey should, most of the time,” he said. “I love hearing them gobble, so that is the main reason they are my favorite.”

He mentioned, “I also love their snow white colored tail fan tips, and they are located in some of the prettiest counties.”

His favorite state to hunt?

“It’s just beautiful country,” he said. “A lot of birds I think I like it, too, because my dad goes with me. It’s kind of an end-of-the-season trip to spend time with my dad.”

Nevada was special to him in that only seven non-resident tags are issued, and after multiple attempts, he was lucky enough to acquire one. The hunt became even more unique after he shot a bird with a leg band, revealing it had been trapped in Utah, released in Nevada and was 6 years old.

The gobbler had traveled some 18 miles from where it was released.

“A lot of people think that they don’t move, but that’s just a prime example,” Thompson said.

Thompson said the Southeastern states proved to be the toughest places to harvest turkey, as the popularity of leases has led to highly pressured public land. The only states that he had to revisit after a failed first attempt were Mississippi, Arizona and Arkansas.

Not one to rely on wild camouflage patterns, choke tubes, decoys or calls, Thompson said his ‘boots on the ground’ approach has filled more tags than anything that could be ordered from a Cabela’s catalog.

“It’s kind of crazy to see all of the new advancement in everything, but I keep it pretty simple,” he said. “Nothing fancy with me, just getting after them, I guess.”

Some turkey hunters may be surprised to learn that he uses decoys very little, depending on the situation.

“Sometimes I think decoys do more harm than good, to be honest,” he said.

Calling is overrated as well.

“Everyone thinks that great calling is the key,” Thompson said. “Don’t get me wrong – it helps, and it’s not going to hurt.

“Just reading situations and knowing what a turkey wants to do” mean far more.

He pays more attention to things such as weather fronts and barometric pressure.

“They’ll gobble better at certain air pressures, or if a storm passes,” Thompson said. “It depends on what type of weather is moving in or moving out.”

As if the Super Slam wasn’t enough, since Thompson’s taken multiple birds in half of the states in the country, that means he’s well on his way to a second Super Slam.

“I’ll probably start working on that, and next year my dad and I are going to go down to Mexico for Goulds, and then that will give me my Royal Slam.“

Thompson’s Slam-fever will continue as he eventually plans to hunt in the Yucatan Peninsula for the Ocellated species to achieve a World Slam. That bird resembles a peacock that whistles instead of gobbles.

Also on his list: a Canadian Slam (bagging an Eastern and Merriam in any province).

Although there is currently no NWTF slam for turkeys on the other side of the planet, Thompson plans to cross the Pacific with his camp vest and Benelli at some point anyway.

“I would eventually like to go to New Zealand,” he said.

“They supposedly have a really good turkey population there.

“I would like to say I shot a turkey everywhere they possibly exist.”

But Thompson said his turkey hunting adventures mean far more to him than just racking up numbers and earning titles.

“You just don’t know when your time’s up, and you just got to get out and experience things, in my opinion, while you can,” he said. “Do what you like to do as long as you can, and as much as you can.”