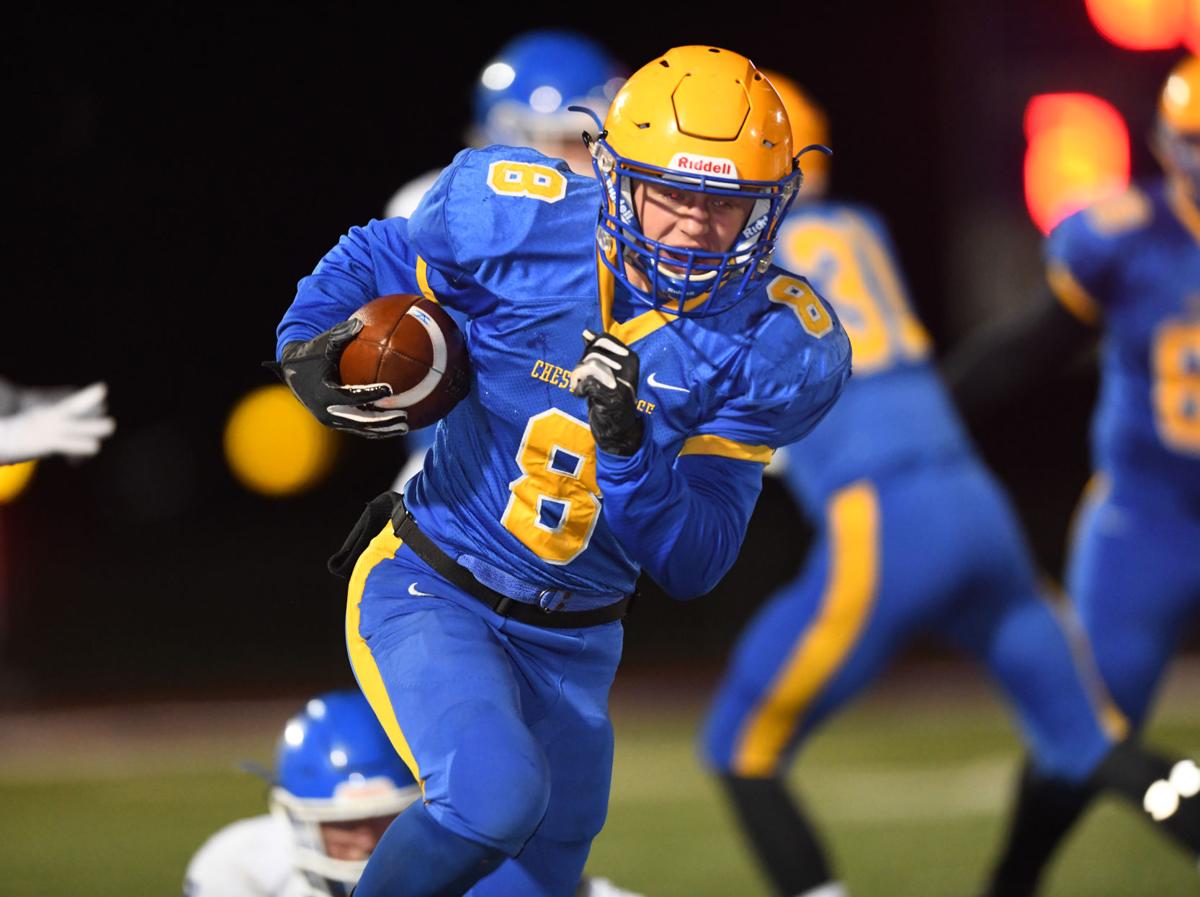 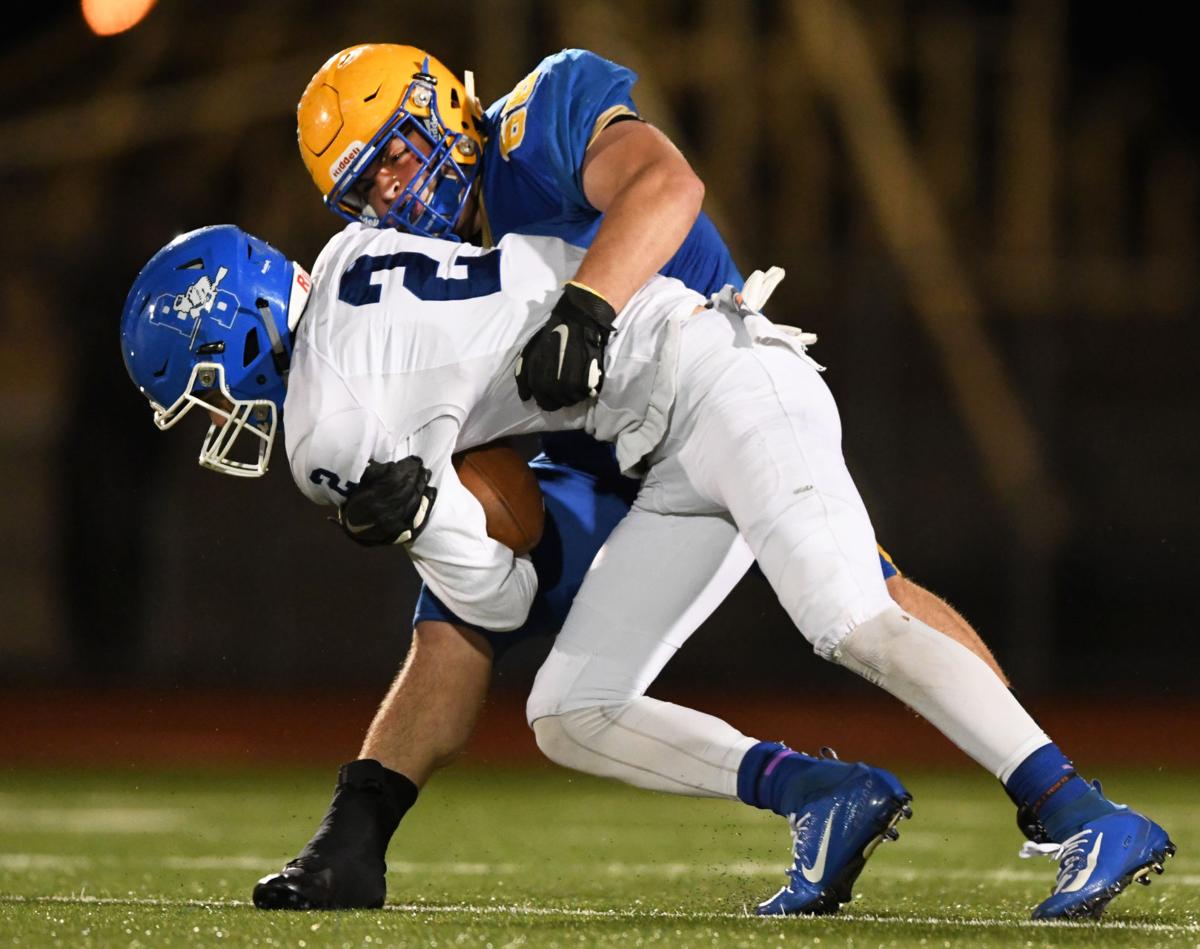 “The third quarter we just turned the tables and capitalized on a couple of their turnovers,” Lions coach Max Shoemaker said after his team improved to 9-2 and earned a spot in the PIAA Class AA Tournament against District 10 champion Wilmington next week.

“The kids made some great defensive plays,” Shoemaker said. “(Matt) Whysong had two picks, one to the house and then the second one was even more spectacular.

“(Seth) Holderbaum had a nice one on their end of the field that turned into six points. Credit to the kids.”

Two plays into the third quarter, the margin increased as quarterback Logan Pfister effectively faked a handoff, then turned upfield through a gaping hole. The junior raced 57 yards for a touchdown. Brady Miller’s kick made it 21-6 only 56 seconds into the quarter.

“We came out strong and made some big plays, great blocking,” Pfister said.

Holderbaum returned a punt 39 yards to the Berlin Brothersvalley 21-yard line. On the next play, Pfister hit junior Joe Gardner with a 21-yard touchdown pass at 9:34.

Whysong stopped a promising Mountaineers drive with a diving interception – his arms extended at the Lions 11-yard line.

“It just slipped through my hand and it ended up on the top of my helmet,” said Whysong, a sophomore playmaker on both sides of the ball. His 23-yard reception on the ensuing possession helped set up Trevor Weyandt’s 46-yard touchdown run with 4:14 remaining in the third quarter.

Holderbaum intercepted a pass two plays later and Ridge took over at the Mountaineers’ 23-yard line. Trey Maxwell’s 6-yard touchdown set a 41-6 score and put a running clock into motion with 2:01 left in the third.

“I told them all week we can’t make mistakes,” said Berlin Brothersvalley coach Doug Paul, whose underclassmen-heavy team closed a 10-2 season. “Turnovers are huge. In 8 minutes in that third quarter, we gave up three touchdowns. You can’t beat a quality team like Chestnut Ridge with the mistakes we made tonight.

“But at the end of the day, one senior starter on both sides of the ball. I’m proud of this team. We’ll be back next year. It’s a challenge to the underclassmen.”

Berlin Brothersvalley opened with a 10-play, 69-yard march that featured plenty of back Cole Blubaugh, whose 3-yard TD run gave the Mountaineers a 6-0 lead at 8:52. Chestnut Ridge’s Weyandt blocked the extra-point attempt.

After Whysong returned the kickoff 37 yards to the Lions 47, Chestnut Ridge needed less than 2 minutes to take the lead.

Pfister passed 20 yards to Weyandt to set up his own 20-yard touchdown run. Brady Miller’s extra point made it 7-6 at 6:46 of the opening quarter.

“That was big for us,” Pfister said. “It was really important. We kind of got out to a slow start defensively and offensively. That play was huge. It got us a good momentum swing.”

Chestnut Ridge’s Whysong intercepted a pass at the Lions’ 39-yard line and maneuvered his way around Mountaineers players before reversing field and dashing to the end zone to complete a 61-yard return for a touchdown.

“I was just running to open space and my guys just made good blocks,” Whysong said.

Blubaugh broke a 56-yard run on the first play of the quarter. The senior back finished with 123 rushing yards on 24 carries and went over 1,000 yards for the season. Junior Will Spochart gained 67 yards and also surpassed the 1,000-yard milestone in the game.

This is the fourth straight season the Lions and Mountaineers met in the District 5 playoffs. Chestnut Ridge has won each game, including title games in 2016, 2017, 2019 and a semifinal last year.

“It really just shows how much work we’ve been putting in,” said Chestnut Ridge senior Duane Knisely, who had two sacks and was a force at defensive end. “We were lucky enough to have good teams to build upon the past couple years to help build the program up.

“I hope we can keep building and keep it going for the next couple years. Keep those wins coming for District 5 titles.”

Bedford controlled the line of scrimmage, limited mistakes and held in check an explosive Westinghouse team in a 26-0 win in the District 5-8-9 Class-AAA subregional championship game at Somerset High School.