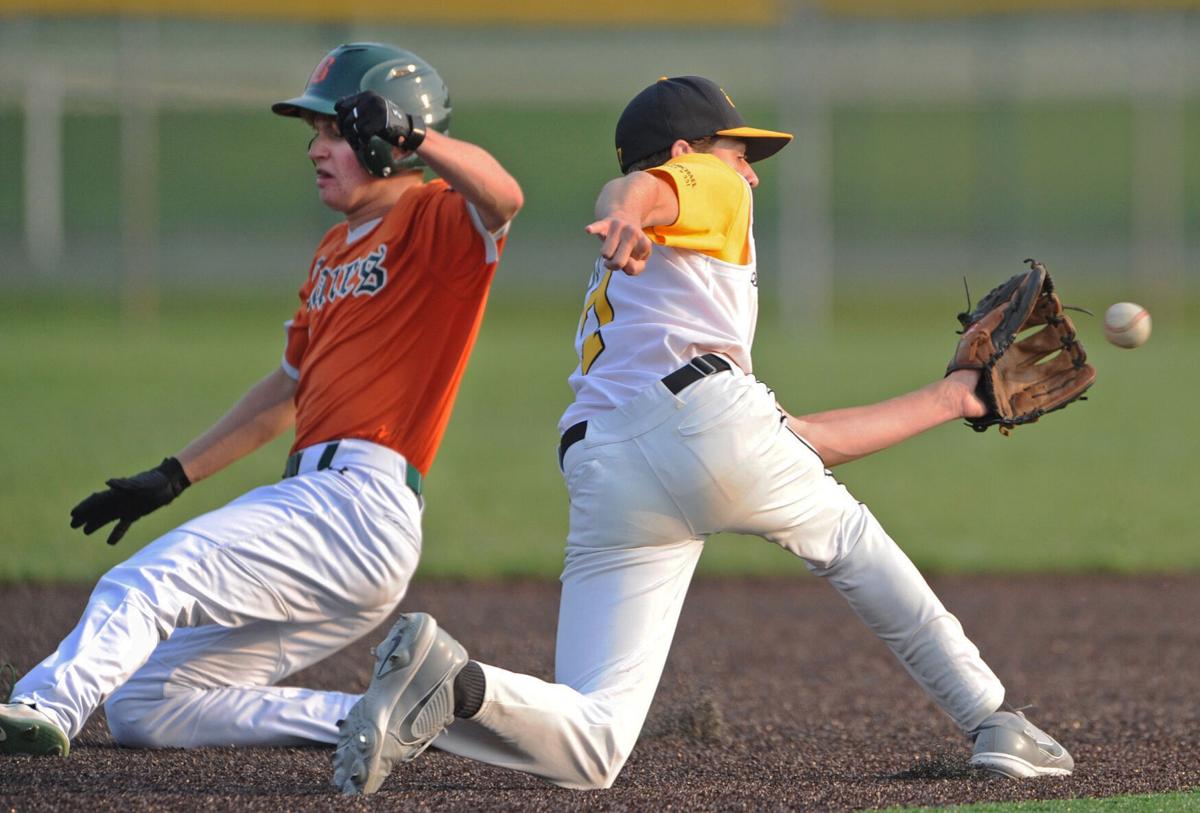 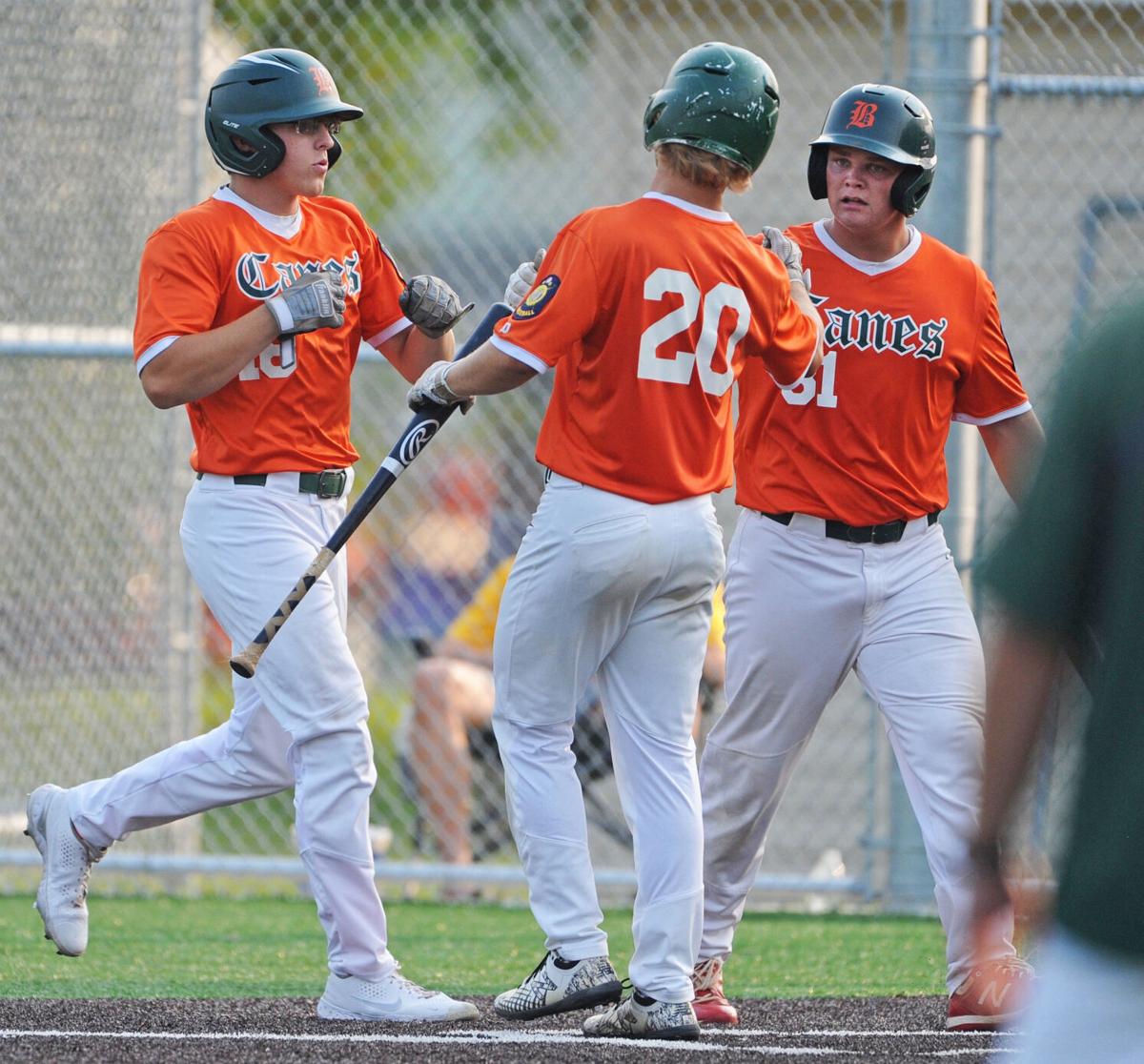 Bedford’s Trenten Mellott (left) is congratulated by teammates Jesse Chamberlain (center) and Calvin Iseminger after hitting an RBI sacrifice fly in the top of the fifth inning Monday, July 19, 2021, at Forest Hills High School in Sidman.

Bedford’s Trenten Mellott (left) is congratulated by teammates Jesse Chamberlain (center) and Calvin Iseminger after hitting an RBI sacrifice fly in the top of the fifth inning Monday, July 19, 2021, at Forest Hills High School in Sidman.

ST. MICHAEL – By the time the Bedford Hurricanes took the field for Monday’s last game of pool play at the Region 7 American Legion baseball tournament, they already knew it also would be their last game of the season – period – even though they probably were going to go 2-1.

“We knew (the situation coming in),” Hurricanes starting pitcher and cleanup hitter Calvin Iseminger said. “It was more we were going to go out there and have fun.

“We just wanted to finish on a high note.”

In lieu of anything else for which to play, Bedford accomplished that, getting two hits and an RBI apiece from Iseminger and Jesse Chamberlain to get past host St. Michael, 4-3, at Forest Hills High School.

It was an apropos conclusion for the Hurricanes, who just couldn’t catch a break in the postseason despite going 21-3 overall and being one of the better youth teams in the region in their age range this summer.

It didn’t matter, though, because Bedford was relegated to third place in Pool A via a tiebreaker as soon as Philipsburg upset previously-unbeaten Yough, 5-2, in Monday’s earlier game.

Bedford, Philipsburg and Yough all finished 2-1, having beaten each other and swept St. Michael. The first tiebreaker, head-to-head, settled nothing, therefore.

The second tiebreaker was runs allowed – Yough had given up seven and Philipsburg 10 in their three games.

Bedford’s first two opponents had scored 18, so Philipsburg and Yough moved on.

That came on the heels of the Hurricanes controversially being declared the runner-up in the Cambria County League when their championship game with Claysburg was rained out and not made up. Claysburg had been the regular season champ.

“That’s definitely hard to swallow,” Bedford manager Jordan Mills said of being ousted on a tiebreaker. “Plain and simple, we just didn’t do enough the last two days to get us to the next day. But, we went out with a win on our season, and that doesn’t happen too often in a tournament like this.”

The Hurricanes jumped out to a four-run lead and then held on. Bedford scored first when Iseminger’s bases-loaded infield single plated Luke Mickle with one out in the top of the third.

Bedford scored two unearned runs in the next inning with Chamberlain and Dalton Shaw crossing the plate after Mickle’s grounder skipped under the glove of Saints first baseman Kirk Bearjar into short right field.

“Coming into the day, we still thought we were going to have a chance to play (on Tuesday), so the mood was a little different at first, but we still played hard. It was a really good way to end,” Chamberlain said.

“Our confidence was there. We meshed really well all season. It just seemed even better today. Everybody was having fun, hits were falling and it worked out.”

Iseminger tripled to lead off the fourth and scored on Trenten Mellottís flyout to center to make it 4-0.

“He’s got two more years of Legion. He’s definitely a skilled player at a few different positions. He’s a hard worker. Every time he’s on the mound or at the plate, you expect him to do something,” Mills said of Iseminger.

Five of St. Michael eight hits were strung together in the bottom of the sixth, pushing across three runs for the Saints to whittle the difference to one run. Iseminger, though, got Dan Blanchetti to ground out to second for the final out with two on.

Andrew Lazor came on to pitch the seventh for the Hurricanes, allowing just a two-out line single by Josh Blanchetti before striking out Cody Falger to end it.

“I came out and I was feeling good. Toward the end of the game, it was hot and I started getting tired,” said Iseminger, who struck out two, walked none and only faced two batters over the minimum through five innings. “It happens.”

Josh Blanchetti and Luke Scarton each had two hits for St. Michael. Scarton got the start for the Saints, allowing two earned runs over five innings.

The game was a bit of a microcosm of the season for St. Michael. The Saints only won four games this season, advancing to regionals as the host team. However, nine of their losses were by three wins or fewer, including two of three to Bedford and all three in regional pool play.

Both teams left the field with some consolation.

“We faced adversity a lot this year and I thought we handled it very well. As a team, the kids were ready to play. We had a lot of injuries. We had a disappointing time with getting guys here,” said Mills, whose team only had nine players for its season finale. “But the core guys stuck together and played some hard baseball down the stretch in playoffs and in regionals.”