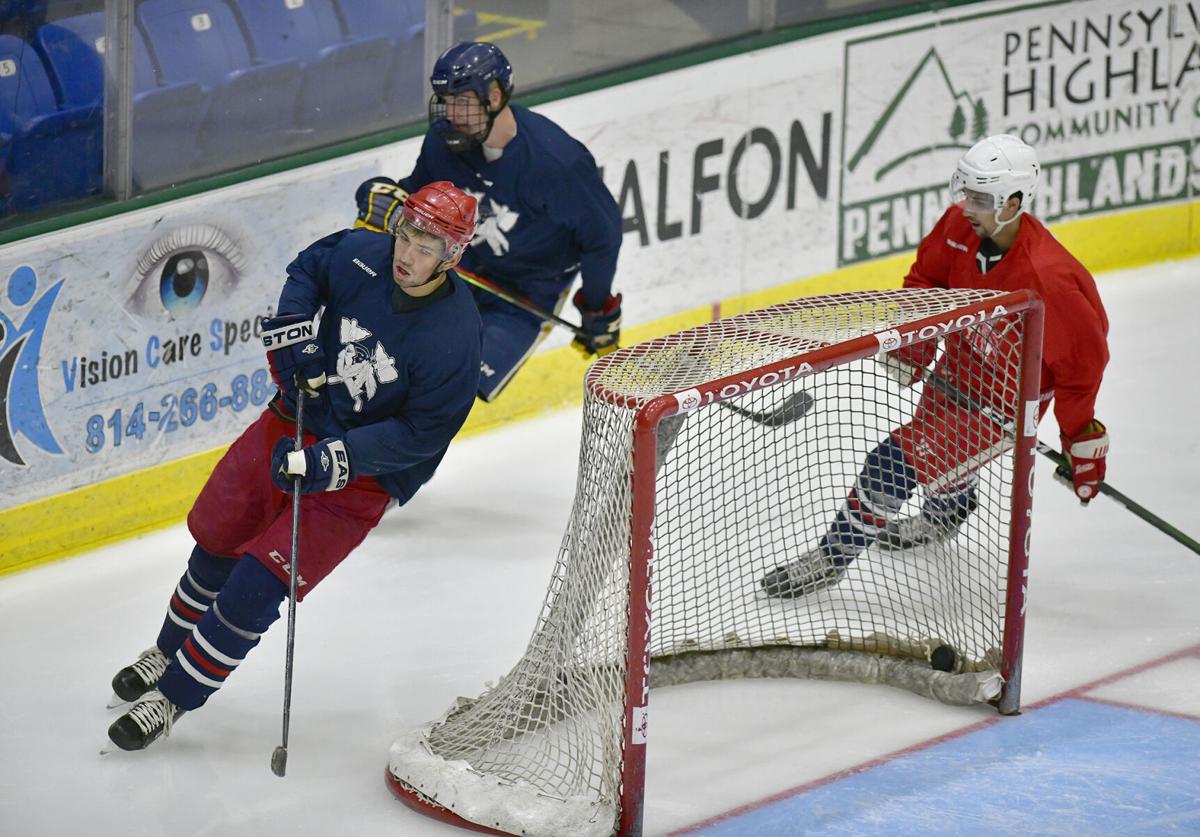 Players skate during laps on the first day of practice for the Johnstown Tomahawks on Friday, Sept. 14, 2020.

Players skate during laps on the first day of practice for the Johnstown Tomahawks on Friday, Sept. 14, 2020.

But for coach Mike Letizia and his staff, splitting the 34 players into two groups is a strategy he typically utilizes.

The fact that it helped the team stay under Gov. Tom Wolf’s guideline of 25 people on the ice was a bonus.

“We split it up into two groups,” Letizia said after Monday’s second on-ice session, which included 16 players and three coaches. “We keep the numbers down a little bit in terms of working together. We know it’s been a while. Everybody’s circumstances over the summer has been different in terms of what they could do.

“We want to get them back into it. Develop good habits. Compete. Do things the right way. We’re going to try to do as much team building as we can within reason.”

The North American Hockey League has set Oct. 9 as the target date to open the pandemic-delayed season.

Training camp also was delayed. Camp traditionally begins in the late summer and the NAHL season typically opens in September.

“This is the first time we’ve been able to hold camp here, which is awesome,” said Letizia, whose team had held camp at the North Central Recreation Center in Ebensburg and the former Planet Ice in Richland.

“The season being delayed actually gives us the benefit of doing camp here. It makes it much easier taking advantage of our own home base and the amenities.

“We’ll run it like this through the end of the week and assess where we’re at. With all the protocols we have to follow, it makes it 10 times easier to be here.”

Letizia wore a shield that extended from the top of his head to below his chin. Assistant coaches Dave Dunkleberger and Nick Mish each wore masks.

Last season’s team was 34-13-2 with 72 points at the time of the pandemic-related stoppage in mid-March. The ’Hawks had won eight straight games and had two head-to-head meetings coming up against the first-place New Jersey Titans.

Johnstown trailed New Jersey by five points, as the 38-13-1 Titans had played one more game at that point.

“Things ended kind of different last year,” said returning left wing Reed Stark, who had four goals and 11 points in 16 games with the Tomahawks last season. “No one’s really experienced that. It feels pretty good to be back. The guys are pretty amped. You can feel the energy.

“A lot of guys are stepping up,” Stark added. “New guys. Old guys. It’s a pretty good feeling. I think everybody is kind of taking that leadership role with the uncertainty of what’s going to come in the future.”

The Tomahawks will be missing NAHL MVP and Forward of the Year Christian Gorscak, of Westmoreland County.

Among the other players who have aged out or moved on are forwards Tristan Poissant, Bennett Stockdale and Max Kouznetsov, defenseman/captain Chris Trouba and goaltender David Tomeo.

East Division Goalie of the Year/Rookie of the Year Alex Tracy signed with Sioux City and will begin the season in the USHL.

Letizia has four goaltenders in camp. Tendered goalies include Connor Strobel, who was with Esmark Stars last season, and Levi Gho, who was with Culver Military Academy.

Free agents include Sammy Evola, who was with Minot last season and had a win over Johnstown, and Chris Branch, who was with the North Jersey Avalanche.

“It’s going to be a competitive battle,” Letizia said.

“It obviously feels unbelievable to be back here and getting to work with these guys,” Letizia said. “The way things ended were so unconventional. It was hard for a while. A very unusual offseason rollercoaster. It finally feels right to be back.”

Gritz started early with Tomahawks, now ready to make an impact in return

Alex Gritz will never forget the first time he skated with the Johnstown Tomahawks as a wide-eyed 12-year-old.