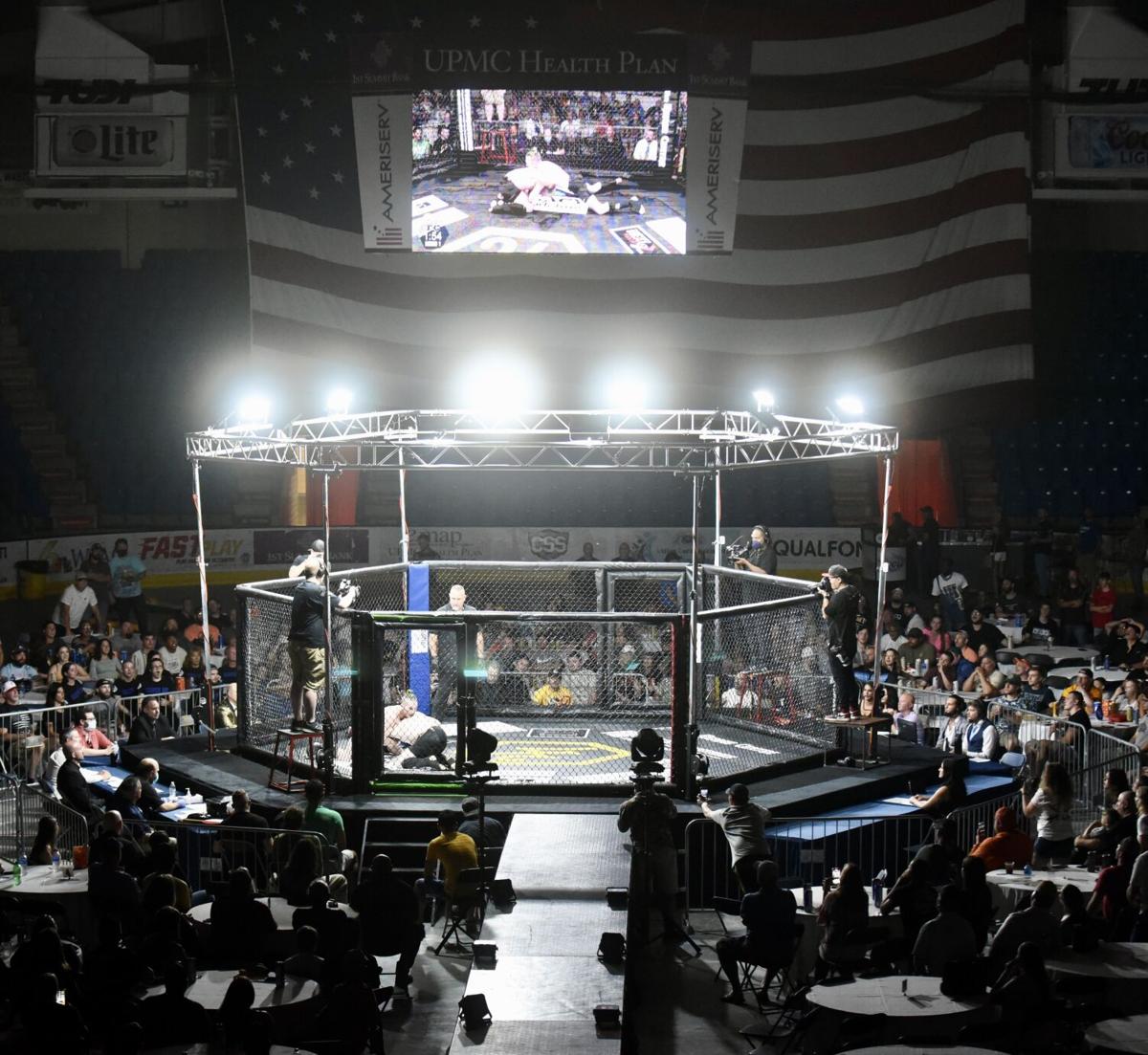 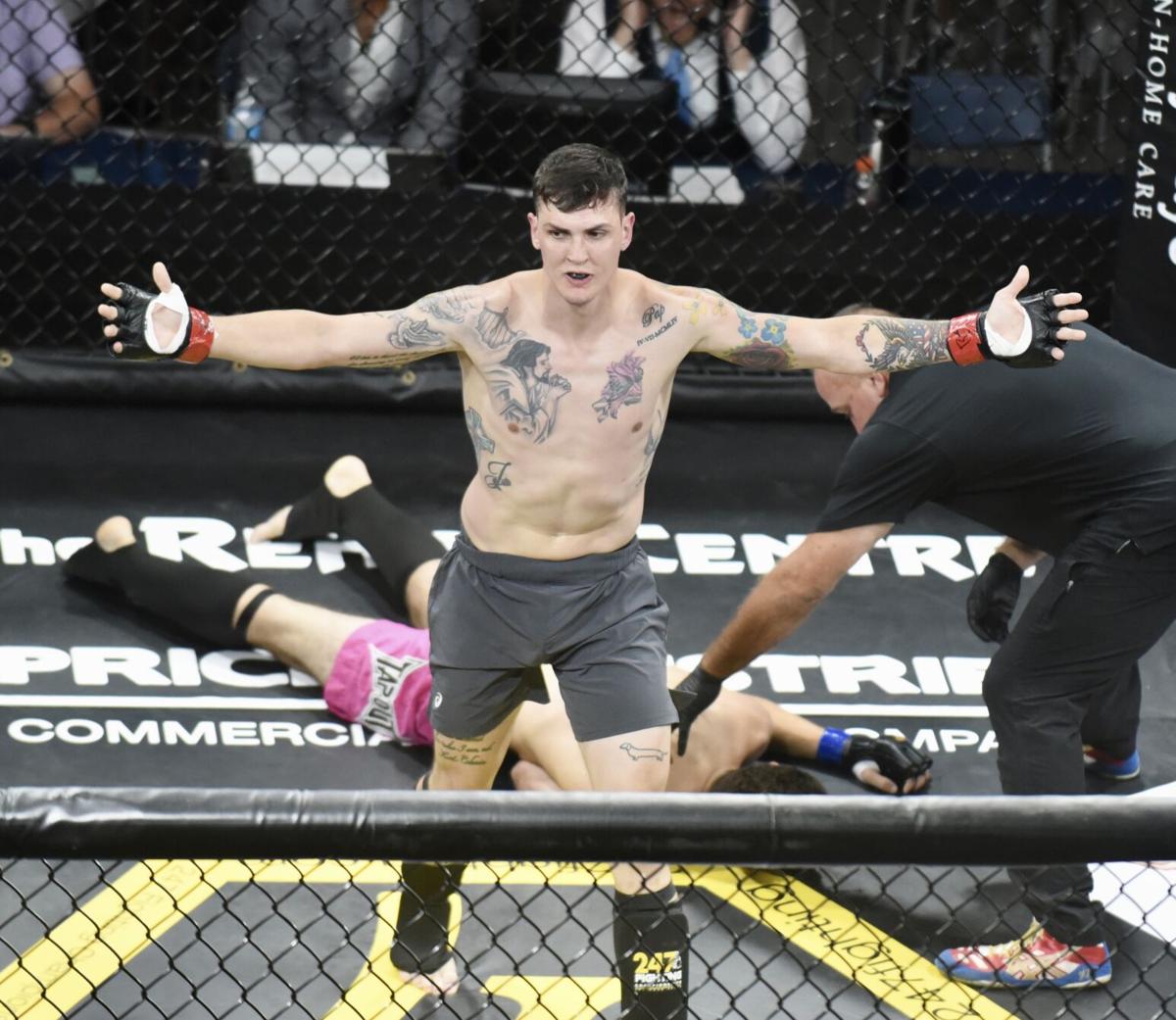 Cory Berchick reacts to his total knockout in 28 seconds in the first round over Nicholas Faulk on Saturday, Aug. 21, 2021, at 1st Summit Arena @ Cambria County War Memorial.

Cory Berchick reacts to his total knockout in 28 seconds in the first round over Nicholas Faulk on Saturday, Aug. 21, 2021, at 1st Summit Arena @ Cambria County War Memorial.

The return of mixed martial arts to Johnstown was a knockout, according to the owner of 247 Fighting Championships.

“Something to build on. I think we’re going to have a lot of great shows here in the future.”

Middleton didn’t have an official attendance for the event, which was the arena’s first MMA card in seven years.

“A guy like Chris Dempsey, you don’t want to see him lying on the ground that long,” Middleton said after a few scary moments where medical personnel attended to Dempsey, who appeared to be unconscious.

Two of the scheduled fights had to be canceled, as Bedford’s Kaden Cassidy and Altoona’s Jordan Wagner each had opponents back out late in the week, which frustrated Middleton.

The 12 fights that went on as scheduled featured some quick endings, including Berchick’s debut. A state medalist wrestler at Conemaugh Township, Berchick put those skills to work against Nicholas Faulk, of Imperial, at 170 pounds.

Faulk launched a flying knee at the opening bell which caused a glancing – and illegal – blow to Berchick’s head, but the Hollsopple native bearhugged Faulk and tossed him to the mat.

Faulk tried to roll through, but Berchick followed him and locked on a chokehold.

Faulk didn’t tap out, but appeared to be unconscious when referee Chip Snyder stopped the fight at 28 seconds of the first round.

“The ref was talking to him,” Berchick said. “He was still fighting for a couple seconds. The ref said, ‘Give me a thumbs up. Give me something. Give me anything.’ Then he jumped on me and was like, ‘That’s it.’ I tried getting (Faulk) up, and he was limp.”

Middleton was impressed by the crowd’s response to Berchick.

“That pop was as loud of a pop as I’ve ever heard in any event for an amateur debut fighter,” he said. “It was absolutely electric. That’s exciting that we have a guy with that kind of following in his debut fight.”

Cahill, who was a teammate of Berchick’s at Conemaugh Township, also had a large and loud following for his debut. Cahill dominated Aaron Harper in a unanimous decision victory in which he put his Division I wrestling experience to use, keeping Harper on the mat for all but a few seconds of all three rounds of the fight.

“I’m happy with the way it went,” said Cahill, whose younger brother, Taylor, is 2-0 as an amateur.

Krouse, who trains with Berchick and Cahill at The Shop – the Cahills’ gym in Berlin – needed just 18 seconds to pick up his first victory.

After losing his debut in May at heavyweight, Krouse dropped to 205 pounds, where he took on Trevor Ward, of Pittsburgh, on Saturday night. Ward tried to stand toe-to-toe with the Berlin Brothersvalley graduate, which turned out to be a bad idea. Krouse landed a stiff jab, then two powerful right hands that sent Ward sprawling to the canvas, and Snyder stopped the fight after just 18 seconds.

“I hit him with that jab and his eyes rolled back in his head,” Krouse said. “I put two more (punches) on it, and that finished it up, but I knew when I hit him with the jab it was done. I called that. I said I was going to hit him with a stiff jab, and it was going to be over. I know what I can do. I’m ready to take the 205 division over, for sure.”

Albright’s best chance for a victory looked to be late in the third round when he had a possible submission hold locked up, but Ross was able to slip his arm out and hold on for the victory.

Dempsey (11-7-0) returned to the cage for the first time in four years, as the former UFC and Bellator MMA fighter faced Rex Harris (12-5-0) at 185 pounds. Dempsey had the advantage early, as he kept Harris pinned against the cage in a standing position and landed a few punches.

Harris, a veteran of the World Series of Fighting and Professional Fighters League, landed a knee to the head that sent Dempsey backward, then unleashed a series of punches that sent Dempsey sprawling to the canvas.

The most competitive fight of the night came in the co-main event, where Ethan Goss (7-6-0), who fights out of Altoona, edged Baltimore’s Schyler Sootho, Baltimore (4-2-0) in a split decision at 145 pounds.

Tanner Cahill expects to feel right at home when he steps into the octagon for the first time on Saturday night.