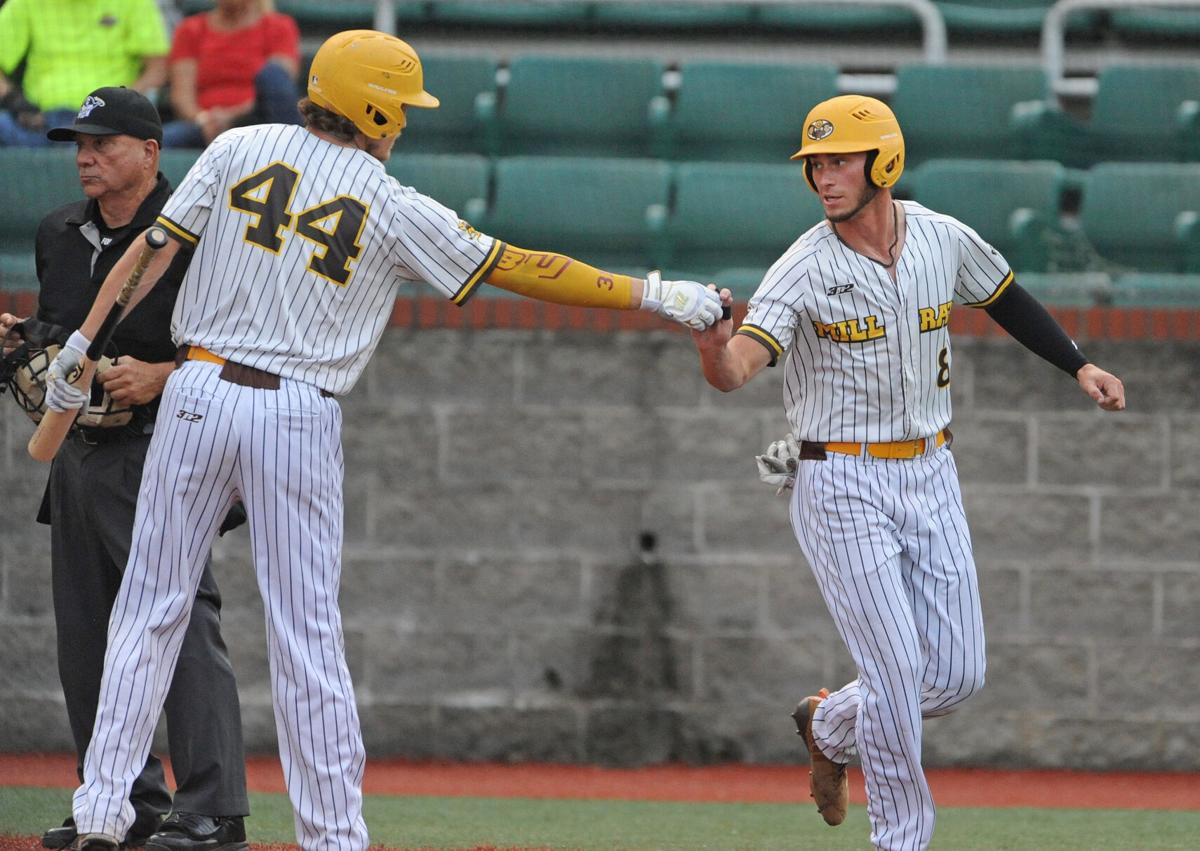 Johnstown Mill Rats’ Ben Newbert, left, greets Mike Whiteherse, who scored on a sacrifice fly by teammate Tanner Froehlich in the bottom of the third inning of a Prospect League game at Sargent’s Stadium at the point in Johnstown, PA., Wednesday, July 28, 2021. 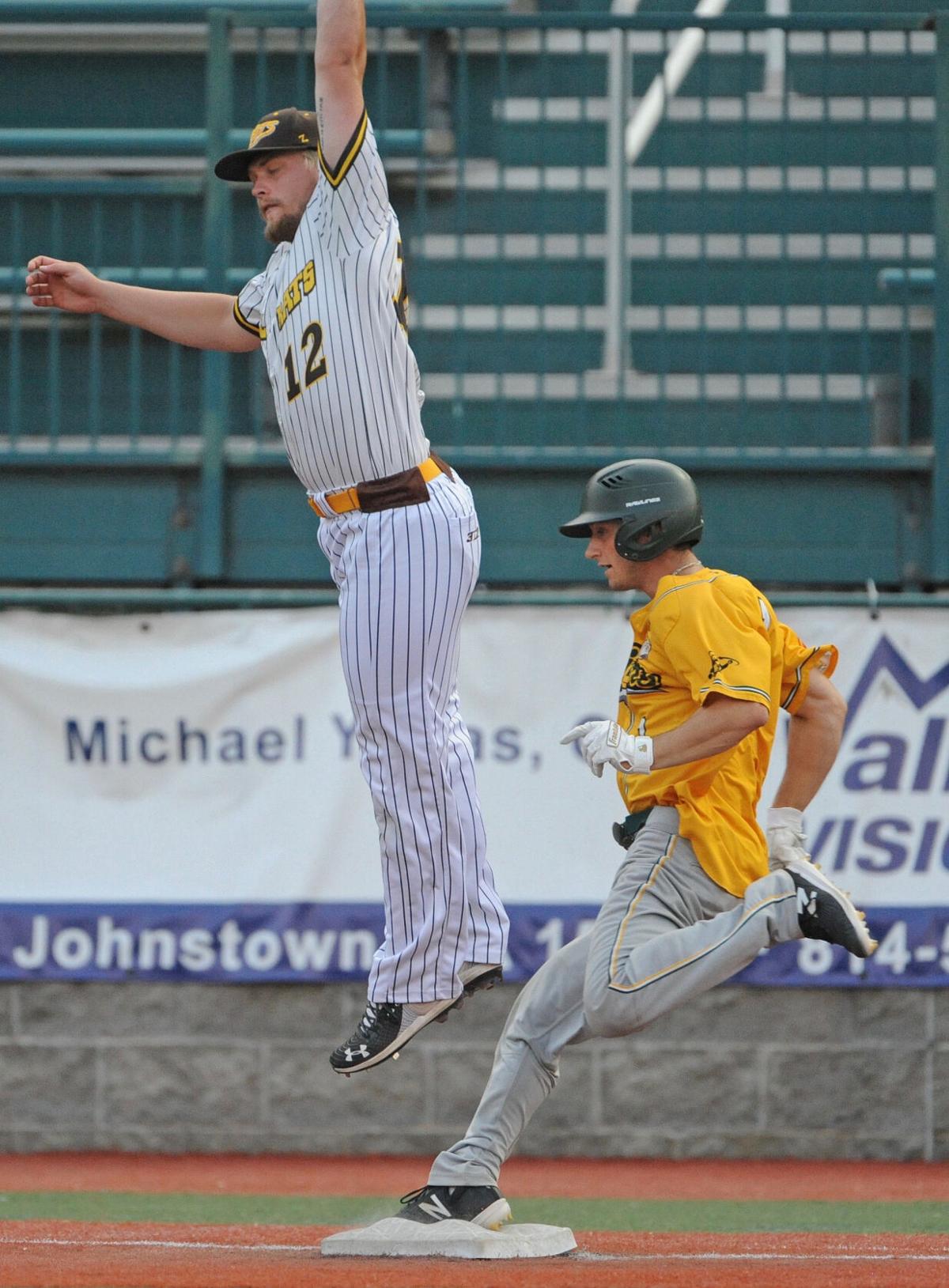 Johnstown Mill Rats first baseman Tanner Froehlich, left, goes up for an errant throw as West Virginia Miners’ Hunter Hertig reaches on a base hit in the top of the third inning of a Prospect League game at Sargent’s Stadium at the point in Johnstown, PA., Wednesday, July 28, 2021.

Johnstown Mill Rats’ Ben Newbert, left, greets Mike Whiteherse, who scored on a sacrifice fly by teammate Tanner Froehlich in the bottom of the third inning of a Prospect League game at Sargent’s Stadium at the point in Johnstown, PA., Wednesday, July 28, 2021.

Johnstown Mill Rats first baseman Tanner Froehlich, left, goes up for an errant throw as West Virginia Miners’ Hunter Hertig reaches on a base hit in the top of the third inning of a Prospect League game at Sargent’s Stadium at the point in Johnstown, PA., Wednesday, July 28, 2021.

Tanner Froehlich had been waiting all game to break into the hit column for the Johnstown Mill Rats, and his final opportunity came at the most clutch point of the club’s matchup with the West Virginia Miners on Wednesday night at Sargent’s Stadium at the Point.

Froehlich shook off the pressure and delivered for his team.

With two runners in scoring position and one out, Froehlich hit a broken-bat single that skipped over diving first baseman Brad Vargas’ glove, giving the Mill Rats a walk-off 4-3 victory over the Miners.

“I got up there, and I started thinking that it’s just a baseball game,” said Froehlich, a Seton Hill product. “I had to help my teammates out because everyone worked hard today, and we wanted the win. I did my best to come through when they needed me most.”

With the victory, Johnstown also holds onto first place in the Ohio River Valley Division’s second-half standings. The Mill Rats’ lead increased to 1 1/2 games over Chillicothe after the Paints were defeated by Lafayette.

Johnstown has seven games remaining on the schedule after Wednesday’s win.

“This win feels great. I hope we can come back tomorrow and do the same thing,” Froehlich said. “It’s pretty much us versus Chillicothe right now. We’re just going to try and go out there and get a sweep to finish this week strong.”

Prior to Froehlich’s hit, the Mill Rats had been 0-for-10 with runners in scoring position in the contest. Johnstown left eight men on base, including three stranded at third.

However, Johnstown (14-8 second half, 21-30 overall) was able to record key hits when they were needed most.

Christian Scott doubled off the right-field fence for the Mill Rats’ first hit in the fifth inning and eventually scored on the back end of a double steal. Scott then hit his second home run of the season over the brick wall in left center field during the seventh to give Johnstown a 3-1 advantage.

“That’s kind of what we’ve been lacking early on, we’ve been putting ourselves in good positions just like we did tonight, but we couldn’t get that big hit,” Johnstown manager Parker Lynn said.

“Fortunately, Tanner came through for us in the ninth, and we had a couple guys like Christian and Trey (Lipscomb) that set us up. Our offense produced when it was needed. We just have to work on getting that big hit a little earlier in the game.”

West Virginia (7-18, 22-31) also received a home run from Anthony Houchins in the top of the eighth, a two-run shot that tied the game at 3-3 before Froehlich’s winner.

The Miners, who have been decimated by injuries this season, stayed in the game with a predominantly young lineup, which gave a positive impression on manager Tim Epling despite West Virginia going 0-for-9 with runners in scoring position and leaving 10 on base.

“We’ve had 12 injuries this year,” Epling said. “Every player on defense, from the first half to now, is gone. The kids here now are trying so hard. It’s a testament to how much they want to win, but it’s not so much the wins and losses with the situation we’re in. It’s about making progress and grinding out these games.”

In just his second start of the season, Wiltsey pitched like a veteran, working out of four multiple-runner jams, including a bases-loaded situation in the sixth. His lone blemish was allowing a solo home run to Evan Antonellis, who led the Miners with three hits.

Will Conroy earned the win in relief for the Mill Rats after tossing a scoreless ninth inning.

Miners closer Austyn Coleman was tagged with the loss.

“Justin went out and threw with everything he got for us,” Lynn said. “He kept us in the game by keeping hitters off balance and getting soft contact. He settled in early and did what we asked him to do. When the pitcher’s doing that, it keeps our defense in the game, which keeps our offense in the game.”

Johnstown takes on West Virginia for two more games to close out the series on Thursday and Friday, with hopes of continuing its playoff push.

“If we can continue to keep our momentum going with West Virginia, we’ll be in great position going into the Chillicothe series,” Lynn said. “The important thing, though, is to keep taking it one game at a time. That starts tomorrow with West Virginia again.”

Where are the fans? Mill Rats last in Prospect League attendance despite being in playoff hunt

Even with the Johnstown Mill Rats chasing a playoff spot in their final regular-season homestand of 2021, the club ranked last in the 16-team Prospect League in total attendance – 6,214 fans – and in average per game at 270.