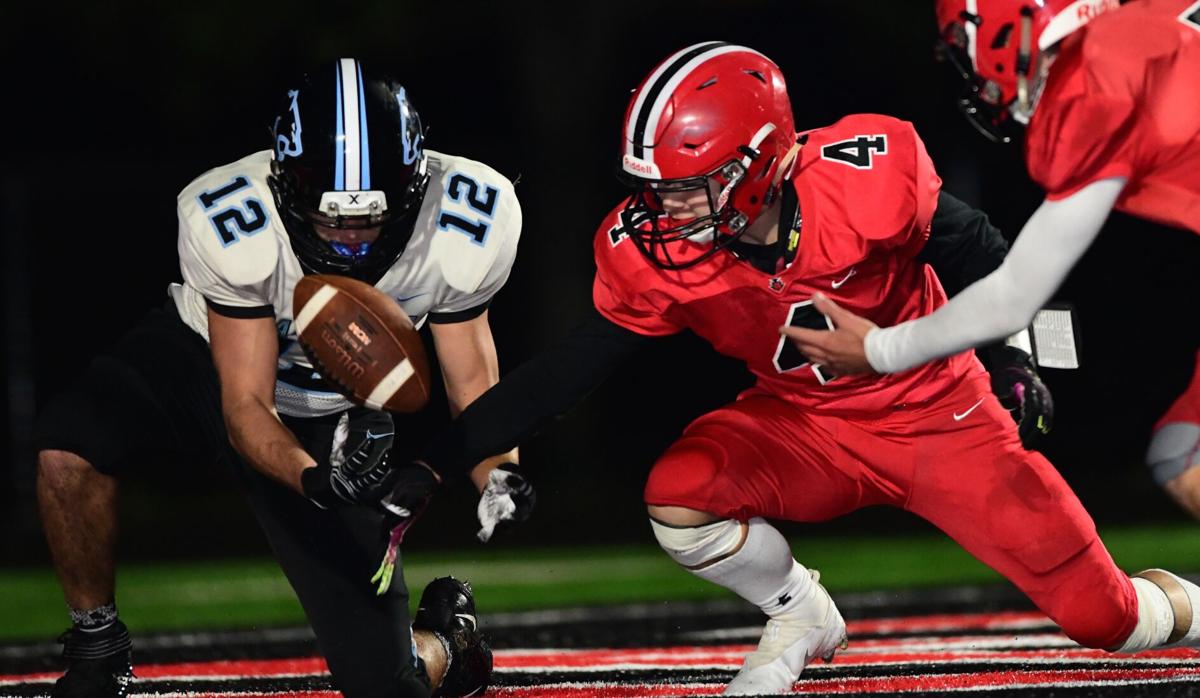 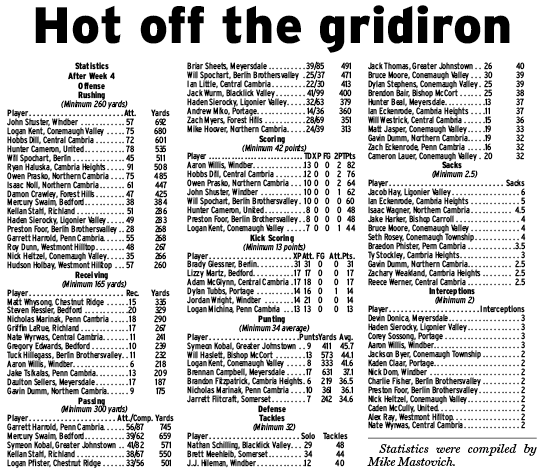 The two-point conversion made its presence felt at or near the conclusion of four close games on Friday night.

Two successful two-pointers resulted in dramatic victories in the closing minutes, while two denied conversion attempts prevented yet another comeback from being completed.

Central Cambria led nearly the entire game against rival Penn Cambria with the Goal Post Trophy at stake. But the visiting Panthers, after trailing 21-0 in the second quarter, mounted a second-half rally and scored with 42 seconds remaining to close within 28-27 of the Red Devils.

“We asked them if they wanted to go for the win,” Penn Cambria coach Nick Felus said after a 29-28 victory. “They said, ‘Let’s go for the win coach.’ ”

Sophomore quarterback Garrett Harrold rolled to his right, eluded pressure and found Jake Tsikalas in the end zone for the successful conversion pass. Braedon Phister had scored a touchdown from a yard out to set up the game-winning conversion.

At Sargent’s Stadium at Point, neither host Bishop McCort Catholic nor Somerset scored a point until the fourth quarter.

The Crimson Crushers led 7-0 after an Ethan Marcozzi 30-yard run with 8:43 remaining. The Golden Eagles then used a 12-play drive and converted on fourth-and-goal via quarterback Bradley Bruner’s second-effort touchdown on a 1-yard keeper.

Ethan Hemminger ran for the conversion with 1:41 remaining and sealed the LHAC contest with an interception.

Somerset won 8-7 and gave first-year Golden Eagles coach Brian Basile his first victory, which came against the Crushers team he had led the previous five seasons.

“We were able to make one more play than they did,” Basile said. “You don’t want anybody to lose this game.”

In Northern Cambria, the Colts erased a double-digit deficit to take a 49-34 fourth-quarter advantage over West Shamokin in the Heritage.

But the Wolves scored a TD, recovered an onside kick and scored again with 1:33 left. West Shamokin went for 2 but the conversion pass fell incomplete and undefeated Northern Cambria won 49-48.

A pair of Heritage Conference front-runners met in Homer City on Friday, with Penns Manor emerging as a 43-42 victor.

Wildcats quarterback Ben Schmidt ran 47 yards to set up his own 2-yard TD dash on the potential game-tying score in the fourth quarter. Schmidt was stopped short of the goal line on the conversion attempt. He finished with 159 rushing yards and three TDs as well as 96 passing yards.

The 4-0 Comets maintained the one-point lead the rest of the way against the 2-1 Wildcats.

Haymaker: Ligonier Valley has relied on a solid cast of players in the Rams’ 2-2 start in the WPIAL.

One of the defensive standouts is 6-foot-1 junior end Jacob Hay, who has an area-best six sacks through four weeks.

Hay started the season with a pair of sacks against both Apollo Ridge (44-7 loss) and Frazier (35-19 win) as Ligonier Valley split those games. Hay had one sack in each of the past two games, a loss at Western Beaver (14-3) in Week 3 and a victory over Steel Valley (28-26) at Weller Field last week.

Overall, Hay has 25 tackles, with 21 solo stops, and one fumble recovery among his totals.

Oh yeah, Ligonier Valley also thwarted a potential two-point conversion pass after Nijay Burt’s 49-yard TD run, his third score of the game. The Rams’ Haden Sierocky batted away the pass and went on to run out the final 4:46 of play to earn the program’s first WPIAL home win in 52 years.

Ligonier Valley previously had denied a two-point conversion in the fourth quarter.

It’s happening all over the country. The coronavirus pandemic has states limiting the number of people that can attend any outdoor event including high school football games.