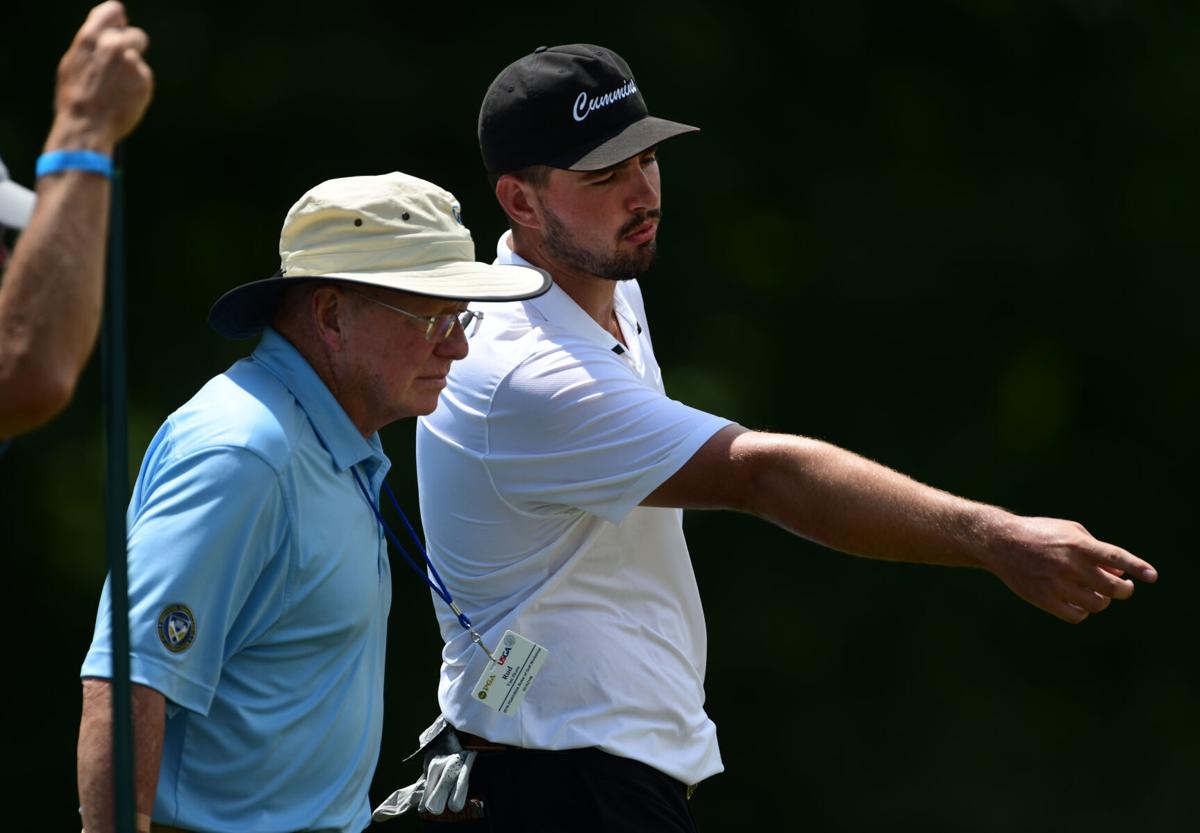 Quade Cummins of Weatherford, OK., right, asks tournament rules official Rud Van Horn about his ball, which is submerged in several inches of water in a bunker on No.15, during the 67th Sunnehanna Amateur Tournament for Champions in Johnstown, PA., Friday, July 24, 2020. Cummins finished in a three-way tie for fourth place with minus 9. 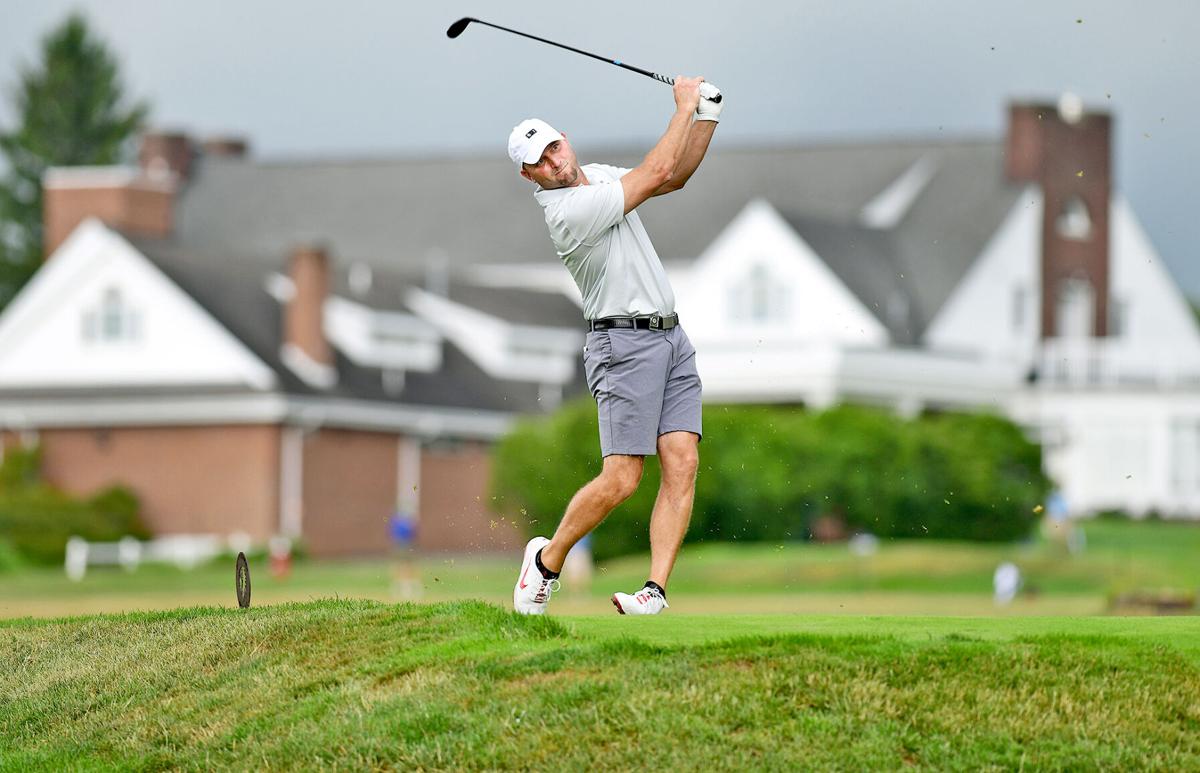 Ryan Hybl, of Norman, Oklahoma, hits his tee shot on No. 4 during the second round of the Sunnehanna Amateur Tournament for Champions on Wednesday, July 22, 2020.

Quade Cummins of Weatherford, OK., right, asks tournament rules official Rud Van Horn about his ball, which is submerged in several inches of water in a bunker on No.15, during the 67th Sunnehanna Amateur Tournament for Champions in Johnstown, PA., Friday, July 24, 2020. Cummins finished in a three-way tie for fourth place with minus 9.

Ryan Hybl, of Norman, Oklahoma, hits his tee shot on No. 4 during the second round of the Sunnehanna Amateur Tournament for Champions on Wednesday, July 22, 2020.

The 67th Sunnehanna Amateur Tournament for Champions provided Quade Cummins an opportunity to play in the same tournament as his college coach.

In fact, Cummins and University of Oklahoma coach Ryan Hybl even held a share of the lead through two rounds.

Hybl, who played in six consecutive Sunnehanna Amateurs from 1998 through 2003, fell off the pace in the final two rounds even as Cummins made a charge on the final day of an event Preston Summerhays won with a record-tying 266.

Cummins tied for fourth with a 10-under 271 that included a round of 6-under 64 on the final day. Last year, Cummins placed fifth at Sunnehanna.

“The guys on my team know he’s good and this week kind of let everybody know he’s still got his game,” Cummins said of Hybl, for whom he played at Oklahoma until recently finishing his college career. “He just got his amateur status back and played in his first tournament last week and didn’t do real well. We know what he’s capable of and if he wants to play in these amateur tournaments every summer he has a good chance of being on a Walker Cup team in a few years.”

Hybl opened with a 5-under 65, holding a spot atop the leaderboard. He shot an even-par 70 in the second round after falling to 4-over through seven holes after making four bogeys.

That day, Hybl rebounded with four birdies. After the round he said he hoped his three Sooners players in the field took note that he didn’t give up.

“He preaches to us that you’ve got to grind all 18 holes,” Cummins said. “(The second round), he was 4-over through maybe seven holes and got it all the way back to even. He puts that into our heads every tournament. I think over the last five years I’ve been with him I’ve done a pretty good job of putting that in my game.”

He played at the University of Georgia from 2001-04 and was a two-time All-American and All-SEC player. Hybl was a Ben Hogan Award semifinalist. He spent four seasons as an assistant coach with the Bulldogs before taking over Oklahoma in 2009 and leading the Sooners to a national title.

During a brief professional career, Hybl had several top-10 finishes on developmental tours before retiring due to an elbow injury.

Weather men: After 2 1/2 inches of rain drenched the Sunnehanna Country Club course Thursday night and into Friday morning, play was delayed an hour in the final round.

The grounds crew did another outstanding job of preparing the course for a championship tournament.

Rain and lightning delays impacted the 67th tournament during three of the four rounds. A four-hour delay had Tuesday’s first round lasting until darkness, with four groups still playing.

Delays also had the second round lasting until dark. Thursday was the lone day without a delay.

“It’s been a crazy year. To pull this off, I’m glad we were able to do it,” said Sunnehanna Amateur co-chairman Brian Chirillo. “I want to thank (grounds superintendent) Mark Leppert and his grounds crew for the incredible job that they did this week and all the hours they put in to get this done.”

Earning a spot: More history was made during the 67th Sunnehanna Amateur as the USGA provided two exemptions to next month’s U.S. Amateur at Bandon Dunes Golf Resort in Oregon.

The Sunnehanna Amateur champion and runner-up each received a spot in the U.S. Amateur. Champion Preston Summerhays previously had earned his U.S. Amateur berth, but after shooting a record-tying 14-under 266 he still appreciated the USGA’s decision.

“I was already in the U.S. Amateur, but it’s really cool the USGA has done that,” Summerhays said.

Runner-up Travis Vick, who finished three strokes back at 11-under 269, is eager to play in the August 10-16 event.

“The U.S. Amateur is the biggest tournament and what everyone is playing for,” Vick said. “It’s what everyone wants to be a part of. It’s a great run tournament. I’m really looking forward to it.”

Hole-in-one: Peters Township golfer Connor Schmidt made a run with a 5-under on the back nine on Friday, including his first hole-in-one.

Schmidt tied for fourth at 9-under 271 with Cummins and Auburn University’s Brandon Manchendo.