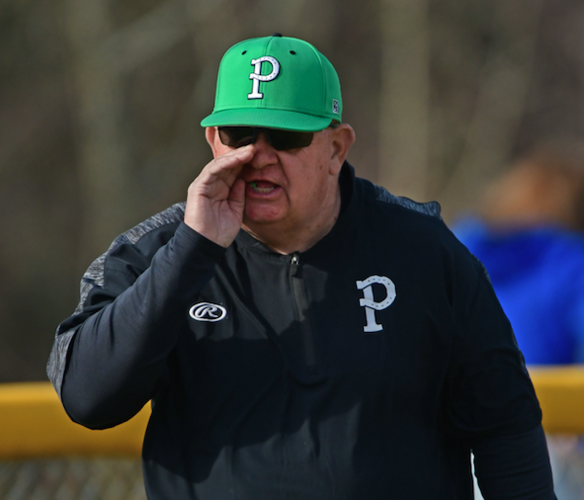 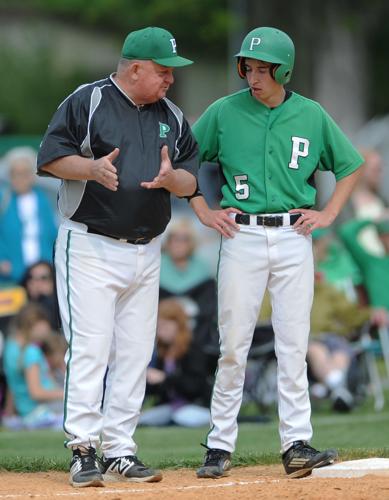 Portage coach Larry McCabe has a word with player Jake Swank at third base in the bottom of the second inning of the PIAA District 6, class AA semifinal in Portage, PA., Tuesday, May 23, 2017. 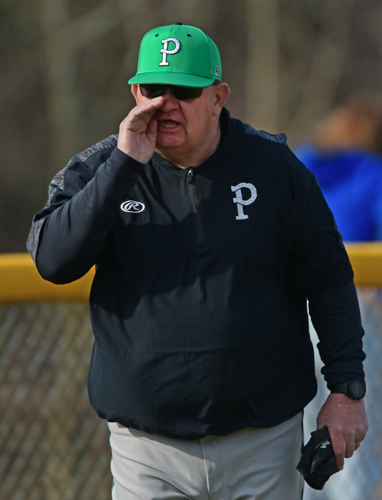 Portage coach Larry McCabe has a word with player Jake Swank at third base in the bottom of the second inning of the PIAA District 6, class AA semifinal in Portage, PA., Tuesday, May 23, 2017.

Those who know Larry McCabe probably would guarantee he won’t be talking about the number 500 in advance of the District 6 Class 2A baseball playoffs.

Not with McCabe’s top-seeded Portage Area High School team hosting eighth-seeded Northern Cambria in the opening round at 4 p.m. Thursday.

But those who savor area baseball history can’t help but wonder if McCabe’s Mustangs will deliver their veteran coach a historic milestone.

In his 41st season as Portage’s coach (42 years if you include a schedule lost to the COVID-19 pandemic last spring), McCabe has a 499-248 career record.

Those numbers are impressive, maybe even astounding. But there’s more to the 66-year-old McCabe than wins and losses on the field.

“Larry truly cares about kids. He cares about kids more than just baseball,” said Portage Athletic Director Jeremy Burkett, a 1995 graduate who played for McCabe. “You don’t hear him talk too much about himself.

“It’s always about the team. He’ll tell you stories about what this kid did in this game or what that kid did in that game.”

Of course, Larry hadn’t been aware of the pending milestone until he finally relented to the annual requests – borderline badgering – of a media member hoping to learn how many wins were on that lengthy resume.

The loss of a season due to a global pandemic might have provided enough extra time for McCabe and the Mustangs to research old yearbooks and scorebooks.

“Honestly, it’s a love of the game,” McCabe said moments after the Mustangs won the program’s first WestPAC baseball title since 2004 on Monday against Berlin Brothersvalley. “I love to teach and coach.

“I’ve been a teacher for 34 years before I retired.

“Just being around students, I just love to coach, motivate, get kids fired up and having a passion. That’s me.

“That’s why I don’t see myself walking away. I still love it. Hopefully my health is going to allow me to continue to coach.”

McCabe still excitedly talks about his first game as coach of the Mustangs, an upset victory over a loaded Forest Hills team that included future major league pitcher Shawn Hillegas in the spring of 1980.

He rattled off names of Forest Hills stars and credited his players for a big effort.

He then admitted Forest Hills came back to beat Portage later that season. Larry is known for telling the complete story.

“Credit that to the kids’ sacrifice,” he said of the upset win. “When I first started coaching, we would do two practices a day when the weather was good. We would go in the morning at 6 o’clock. It was an optional thing because I couldn’t put kids in a predicament.

“They had to be bused to school.

“You’d be surprised how many kids showed up. I’d say, ‘Guys, 6 a.m. We’re going to get a couple hundred swings in before school.’ ”

McCabe said his current team, which brings a 16-4 record into the District 6 playoffs, has a similar approach.

“It’s so satisfying,” McCabe said. “You call for optional workouts and I get the whole team there. We played four days in a row.

“These kids come and they’re committed.

“When you have a group of kids who are committed, that’s all you can ask for.”

McCabe has instilled pride in the program and built a tradition. His two assistant coaches, Josh Burkett (Jeremy’s brother) and Jude Decort, each played on Portage’s 1996 team that finished as District 6 runner-up, but advanced to the state playoffs and eventually reached the PIAA semifinal round.

“One game, win and you go to the state championship,” McCabe said. “We were in the Final Four. We lost in the District 6 championship game 3-0 to Mount Union.

“We turned around and went to Pittsburgh and beat Riverside.

“We turned around and went to IUP and beat the District 9 champ, Karns City.

“Then, we played the Western Final against Mount Union again. They beat us and went to the state championship game.”

The Mustangs won the District 6-2A crown in 1986 in a classic battle against United at Altoona’s Veterans Field.

“Larry is a guy, you look at their program, they do things right,” said Conemaugh Township coach Sam Zambanini, who reached the 400-win mark earlier this season. “They play the game the right way.

“They hustle on and off the field. They play with a lot of class and dignity. That’s a tip of the cap to Larry and what they do.”

McCabe said Portage followed a policy in which teams had to have at least a .500 record at the time of the cutoff to enter the district playoffs. He said the Mustangs met that standard throughout his career.

“So many good players I’ve coached. So many people who contributed to the program,” McCabe said. “When you’re blessed with talented players and coaches, it’s special.”

As a former Mustangs standout, Jeremy Burkett said his baseball coach had a knack for making the players feel as if they were a key part of the team, regardless of their talent or experience level.

“He made you feel confident in what you were good at,” Burkett said. “Everyone has strengths and weaknesses. He brought out the strengths. He didn’t emphasize what you couldn’t do. He made you feel like you’re in this role on the team, you’re good at this, keep doing this and help the team out.

“He was able to bring out the positivity.

“Always optimistic. He made you feel like you were part of the team.”

Burkett said he and McCabe often are asked how long the veteran will continue to coach.

“The question you get a thousand times is, ‘How much longer does he have?’ Why does it matter?” Burkett said. “We’re lucky to have him. He can go as long as he can.

“I hope he never retires. I hope my son plays for him someday. You want a person who cares about the kids in charge at your school, and not about themselves.”

An experienced coach such as McCabe knows better than to even mention the number 500 as a playoff game looms.

But it’s definitely worth stating that McCabe and his Mustangs are on the verge of making history.

Down to their final two outs and trailing by two runs in the WestPAC baseball championship game, the Portage Area High School players didn’t display frustration or hang their heads on Monday afternoon.