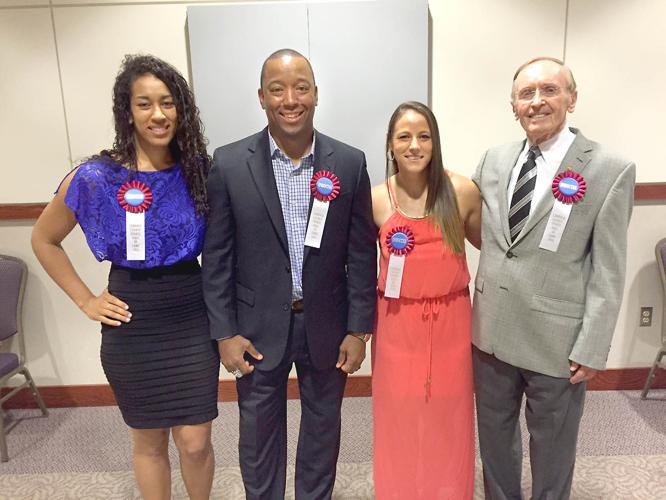 Members of the Cambria County Sports Hall of Fame’s Class of 2016 pose for a photo on Saturday, July 9, 2016, in Johnstown. They are (from left) Samantha Pollino, Geroy Simon, Karlee McQuillen and John Goettlicher. 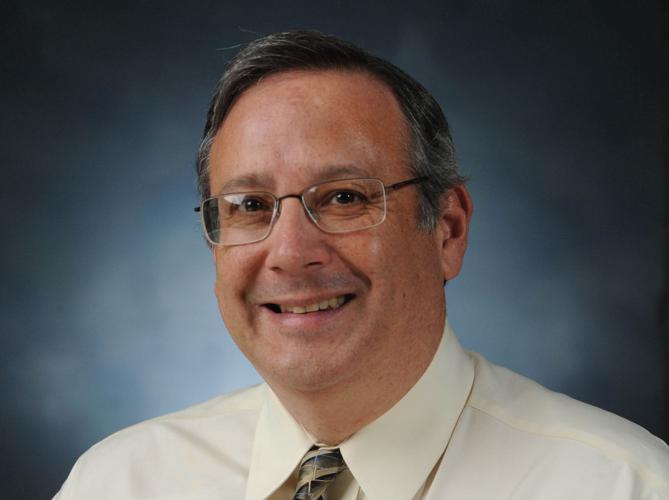 Members of the Cambria County Sports Hall of Fame’s Class of 2016 pose for a photo on Saturday, July 9, 2016, in Johnstown. They are (from left) Samantha Pollino, Geroy Simon, Karlee McQuillen and John Goettlicher.

The 19th Cambria County Sports Hall of Fame banquet provided three members in the Class of 2016 an opportunity to travel great distances and return to their athletic roots on Saturday night.

The conversations at the podium frequently turned to how Johnstown and the surrounding region played a huge role in molding the young men and women who eventually excelled at the elite level in their respective sports.

“It’s great to be back home,” said inductee Geroy Simon, the Greater Johnstown High School graduate who starred at the University of Maryland and later became the all-time leading receiver in the Canadian Football League. Simon lives in Vancouver, British Columbia.

“This is a special moment for me and my family. Any chance you get to come home is very special. Athletics has given me the chance to travel all over North America and perform before millions of fans.

“I’ve been given a free education at the University of Maryland, where I had the greatest four years of my life,” said Simon, who had 16,352 receiving yards and 103 career touchdown catches with the British Columbia Lions and Saskatchewan Roughriders. “I’m the all-time leading receiver in yards and receptions in the Canadian Football League, and I’ve won three Grey Cup championships. But that is not the story of me. This is where it all started, right here in Johnstown.”

The crowd of 300 people at the Pasquerilla Conference Center often was on its feet throughout the induction ceremony that welcomed Simon, Karlee McQuillen, Samantha Pollino, John Goettlicher, Evan Slonac and the late Gen. George B. Simler.

“Living in Florida for the past four years, it’s always a blessing to be able to come home as often as I do,” said McQuillen, who was an All-American javelin thrower at Penn State University and competed internationally. “And, this time is especially special not only because I’m receiving this amazing honor with all of these amazing athletes and visiting my family, but also to reconnect with some of the most important people in my life.

“These people not only shared in many of my wonderful memories, but also made some of the very unhappy memories bearable because we were in it together,” added McQuillen, who won two state championships throwing the javelin at Westmont. “These people have a place in my heart. These people pushed me to be as great as they are.”

After scoring more than 2,000 points and grabbing more than 1,000 rebounds at Conemaugh Valley, Pollino went on to play at Division I Duquesne University, where she once again surpassed the 1,000-point plateau.

“This is amazing, the outpouring of love and the community support,” said Pollino, who now lives in Charlottesville, Virginia. “I feel honored to be here. I’m so happy I could come back and be a part of this celebration and be on the stage with these amazing people.”

Simler, a Ferndale High School graduate, was inducted into the military hall in the Class of 2012 in honor of his distinguished service, which included his roles as a World War II combat pilot and Commanding General of the Air Training Command and the Military Airlift Command.

Donatelli served in the Army Air Corps and was a prisoner of war during World War II. He became a baseball umpire who spent 24 seasons in the National League and worked five World Series and four Major League All-Star Games.

Simler was the athletic director at the United States Air Force Academy from 1957 to 1961, and he led the campaign to establish the Commander-in-Chief’s Trophy, honoring the winner of the annual football competition between the three U.S. Service academies.

Making his mark: Goettlicher served as a golf professional at Berkley Hills and Sunnehanna Country Club for many years during a career that led to his induction to the Tri-State PGA Hall of Fame.

Cambria County Sports Hall of Famer Crooks, a member of the Class of 2008, credited Goettlicher for helping to establish the success of the Sunnehanna Amateur Tournament for Champions.

“John Goettlicher, in my opinion, was the most important hire in Sunnehanna (Country Club) history,” Crooks said in an email on the eve of the hall of fame banquet. “The reason I say that is at that time they were going through golf pros faster than the Cleveland Browns go through quarterbacks. So, the powers that be finally said, ‘Let’s go with someone we know, someone who is not a professional golfer but rather a golf professional. Someone who cares more about the members’ golf games than their own.

“After 19 great years at Sunnehanna,” Crooks continued, “John went over to Rolling Rock, so the club went back down Goucher Street (to Berkley Hills Golf Course) and hired Joe Shorto, who spent 30 years doing the job he learned from John Goettlicher.”

Both Crooks and Goettlicher praised the late Charles Kunkle, a member of the inaugural Cambria County Sports Hall of Fame Class of 1965, for his role in bringing Goettlicher to Sunnehanna.

Crooks was the No. 2 player on the nationally recognized University of Miami golf team in the early 1960’s and he played in the NCAA Division I men’s championships in 1961 and 1962 as well as in three USGA national championship tournaments – 1962 at Pinehurst, North Carolina; 1963 at Wakonda, Iowa; and 1969 at Oakmont.

The Cambria County Sports Hall of Fame Class of 2016 was introduced to an enthusiastic crowd of 300 people on Saturday night at the Pasquerilla Conference Center.

In the Spotlight | Shelter from the storm: Johnstown native helps Florence evacuees in North Carolina