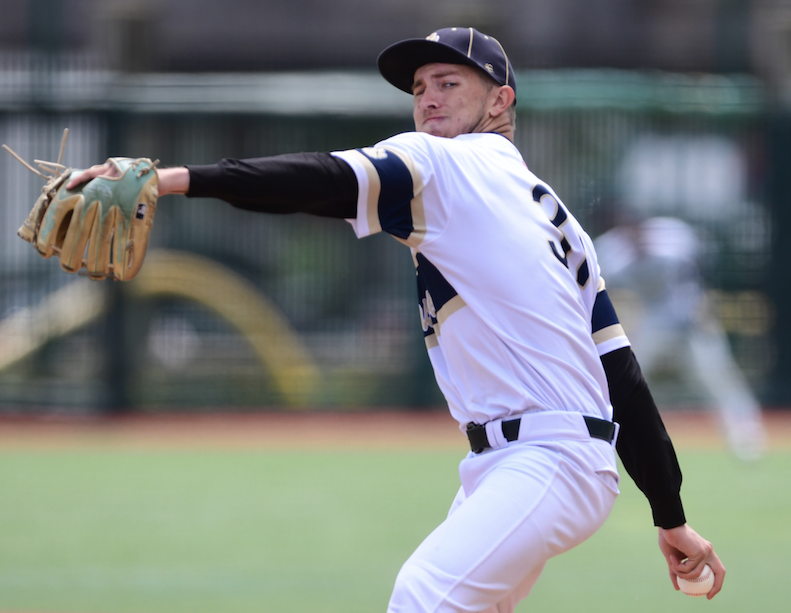 Pitt-Johnstown pitcher Dylan Heid throws to a Gannon batter in the top of the first inning of Game 1 of their PSAC West doubleheader on Friday, April 30, 2021, at Sargent's Stadium at the Point in Johnstown, Pa.

Pitt-Johnstown pitcher Dylan Heid throws to a Gannon batter in the top of the first inning of Game 1 of their PSAC West doubleheader on Friday, April 30, 2021, at Sargent's Stadium at the Point in Johnstown, Pa.

Dylan Heid threw 73 pitches during yet another gem on the Sargent’s Stadium at the Point mound on Friday afternoon.

Only 13 of those pitches were balls. Sixty, strikes.

Despite that impressive ratio, Heid and Pitt-Johnstown coach Todd Williams each believed the senior right-hander didn’t have his best stuff in the opener of a doubleheader against visiting Gannon University.

That’s what makes both Heid’s immediate and long-term future so intriguing.

“Dylan has been magnificent all year,” Williams said after Heid threw a 1-0 shutout to win for the seventh time in eight decisions this season. “He’s been in double-digit strikeouts every game. The only game he lost, we lost 2-0. He’s just been phenomenal. He deserves everything he’s getting.

“He’s getting a lot of notice. There have been scouts checking him out all year,” Williams added. “He’s already been invited to a couple pre-draft workouts. I think he has a good shot (of being drafted).”

Heid said he received some more positive news on Friday that reinforced the Malvern, Chester County, native’s status as a prospect.

“I got an invite today for the MLB Draft League,” Heid said. “This is the first year they’re having it because a bunch of minor league teams got canceled and they’re using their stadiums in the Northeast.

“They’re having their own draft league instead of going to collegiate leagues and watching games.”

According to MLB.com, the MLB Draft League will consist of six teams. Each team will play 68 games during the inaugural season, which is set to begin on May 24 and break for the July 11-13 Major League Baseball Draft, before resuming play.

“Hopefully I can get drafted this year,” Heid said. “That’s the goal.”

This season he has four shutouts, six complete games and a 0.84 ERA with 95 strikeouts and 10 walks in 531/3 innings. He’s a big reason the Mountain Cats are 16-14 overall, with a 12-10 mark in the PSAC Western Division postseason chase.

His career record at UPJ is 16-12, but minus a six-loss freshman season, he is 15-6 the past three springs.

“Usually I’m a big fastball guy and I just throw fastballs,” Heid said after Friday’s games. “I had a little soreness around my elbow so getting that last push on the fingers was more stressful so I wasn’t trying to do that as much today. I relied more on my off-speed, my cutter. The changeup was there.”

Heid will continue to make his pitches. That bodes well for the Mountain Cats and their ace’s prospects this spring.

Lennox Pugh knew he made solid contact during a seventh-inning at-bat on Friday afternoon at Sargent’s Stadium at the Point.

The Pitt-Johnstown junior third baseman’s main concern was whether the ball would clear the brick wall in left-center field during a scoreless game against Gannon University.