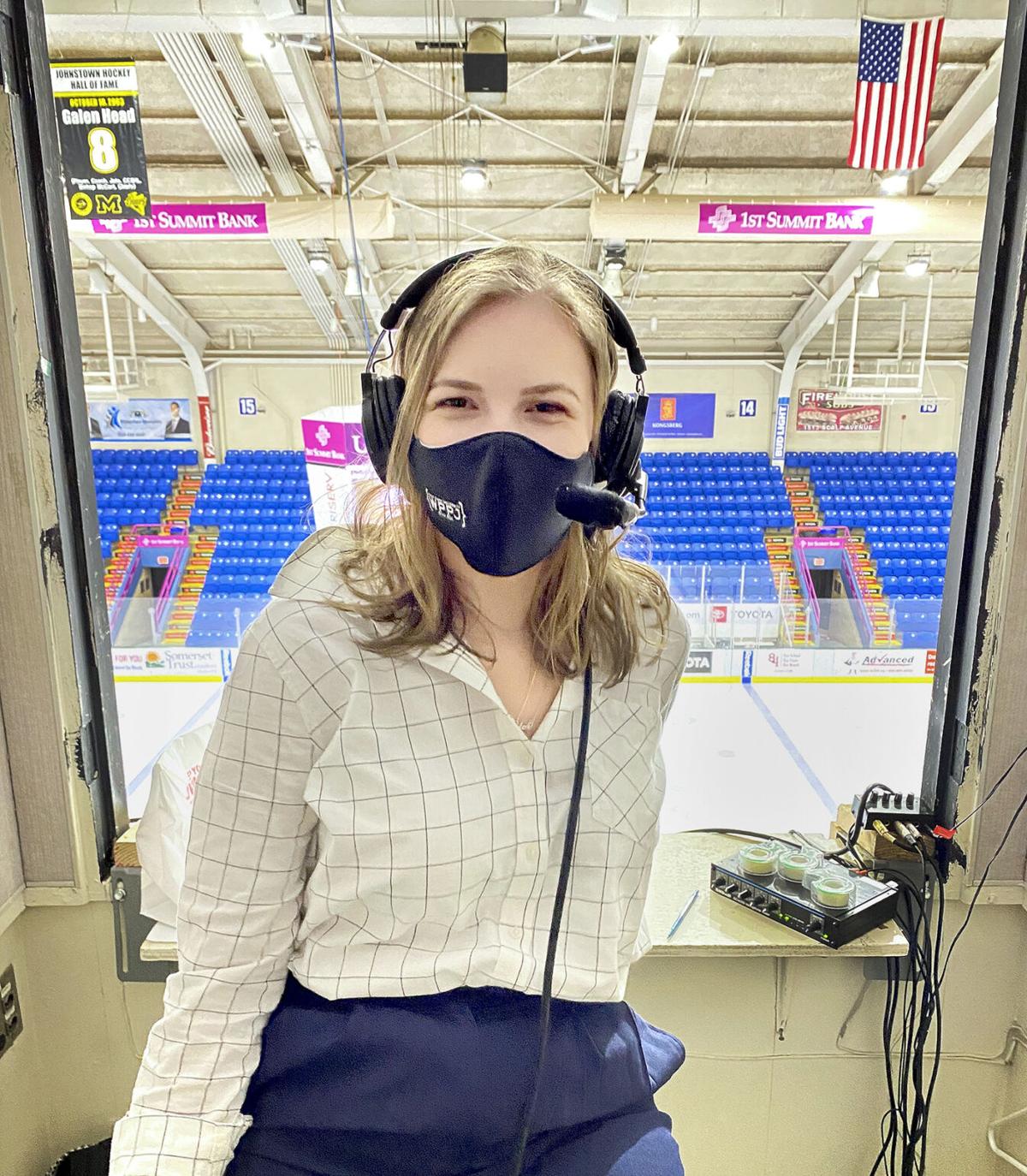 Taylor Spirito didn’t know she was about to make history when she answered a close friend’s New Year’s Day call.

A senior at Point Park University in Pittsburgh, Spirito listened as Caitlin Stoner told her the Johnstown Tomahawks had just added an exhibition game to their schedule and the North American Hockey League team didn’t have a play-by-play broadcaster available on that date.

Spirito stepped in to fill the role and simultaneously became the first female play-by-play broadcaster in the Tomahawks’ nine-year history.

“I have a friend who works in the front office,” Spirito said of Stoner, the Tomahawks’ social media coordinator. “She reached out to me about this exhibition game they had and said they didn’t have anyone available to do play-by-play. She knew I was interested in hockey and media. She asked me if I would be interested. I dropped everything and made my way over.”

A broadcast reporting major from Erie, Spirito had done live sports previously, but hockey wasn’t on her resume until Monday, when she called the Tomahawks’ 5-4 loss to the USA Hockey National Team Development Program Under-18 team at 1st Summit Arena.

“I’ve done play-by-play before, but I’ve never done play-by-play for hockey,” Spirito said. “Soccer, basketball, volleyball, baseball and softball. We don’t have a hockey team here at Point Park. It was a little challenging at first. But after a few minutes I was able to take what I’ve seen from watching hockey broadcasts myself and apply it.”

Spirito crammed through rosters, statistics, articles and social media posts about the Tomahawks.

“It was challenging because I don’t follow the Tomahawks,” she said. “I went over all the pronunciations. I asked my friend who works in the front office for storylines. I see their points for the season and their stats.”

Spirito filled in for eight-year Tomahawks broadcaster Rick Hull, who said he is now cleared to return after being sidelined by COVID-19. Hull said he followed Spirito’s internet broadcast on HockeyTV and commended her.

“I am incredibly excited to get back. I feel so good now, the best I’ve felt in three weeks,” Hull said. “I just love doing the games.”

Spirito knows the feeling after her one-game appearance in the booth at historic 1st Summit Arena @ Cambria County War Memorial.

The Tomahawks made posts on Twitter and Facebook noting the historic significance of Spirito’s calling the game.

“I wasn’t expecting it,” Spirito said of the response. “No one in the front office expected it to get that much traction.

“I saw people I respect and look up to commenting, congratulating me. (WTAE-TV co-anchor) Andrew Stockey, (KDKA-TV personality) Celina Pompeani. (93.7 The Fan radio host) Colin Dunlap said it’s people like me he wants his daughter to look up to. That made me tear up.”

Spirito said there are no plans for her to work additional Tomahawks games, though she’ll answer the call if needed again.

“I still have a few months left until graduation,” Spirito said. “At this point it’s applying to places to see where I can end up. I know I’d like to work in sports media. Anywhere I can get a foot in the door, I know I can’t be picky – especially in the middle of a global pandemic.”

John Gelatt had a memorable December. The NAHL recognized the Tomahawks scoring leader as the league’s Forward of the Month.

Gelatt, 19, had nine points in four games, including seven goals. He had two game-winners. Overall, Gelatt’s 24 points rank fourth in the NAHL.

“It’s been really helpful to play with guys that I am familiar with,” said Gelatt, who committed to play at Holy Cross. “Me and my linemates, Brendan Clark and Jay Ahearn, have been instrumental in our success and there a lot of chemistry there from having played together the year before.

“In addition, both my brothers played in the NAHL, so they gave me some good advice and gave me an idea of what it would be like. The big thing for me was to play with confidence,” Gelatt said.

Tomahawks forward Jay Ahearn was named NAHL East Division Star of the Week after collecting eight points in two wins over the Northeast Generals. Ahearn had a pair of four-point efforts on New Year’s Eve and New Year’s Day as the Tomahawks outscored the Generals by a combined 14-0.

Former Tomahawks goaltender Ryan Bednard earned ECHL Goaltender of the Week honors for his play with the Greenville Swamp Rabbits. He stopped 26 of 27 shots in a 3-1 win over South Carolina on Friday.