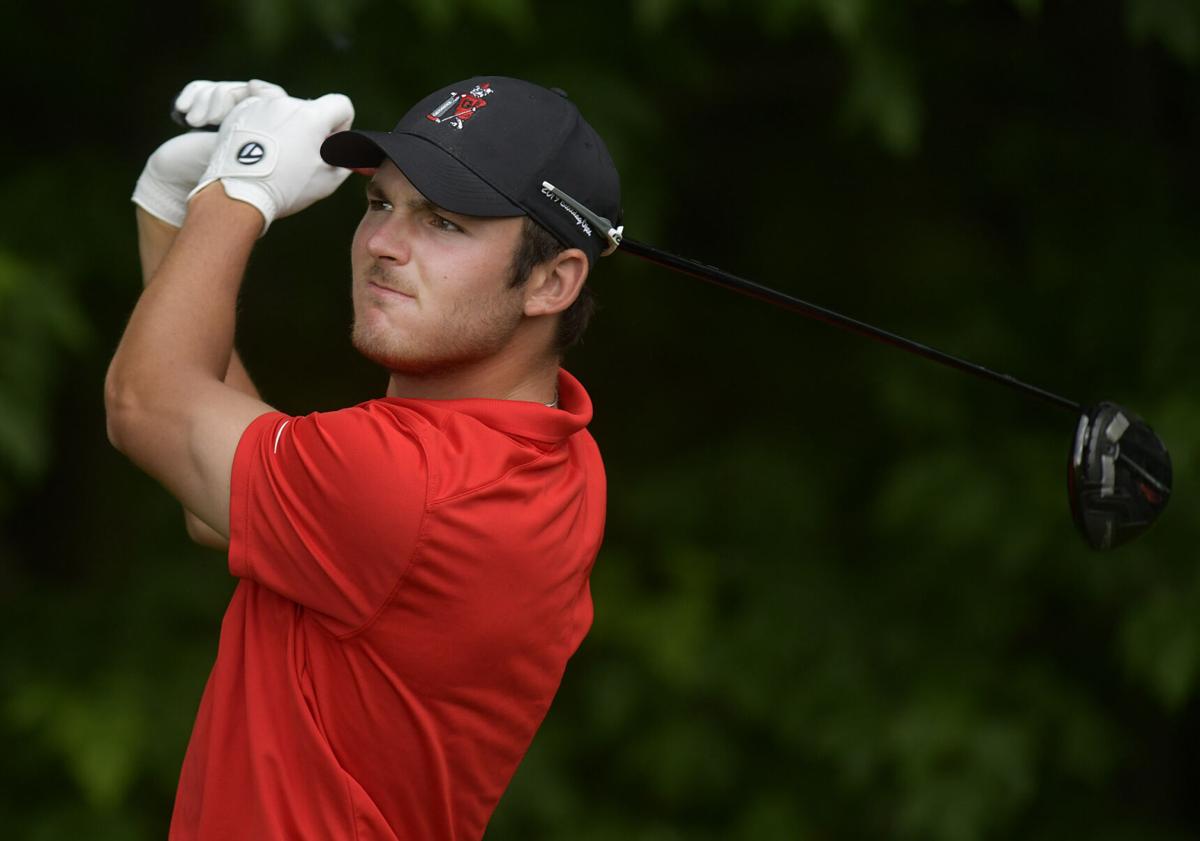 Trent Phillips of Inman, South Carolina watches his tee shot at the par five 9th hole, during the final round of the 68th Annual Sunnehanna Amateur on Saturday, June 19, 2021. 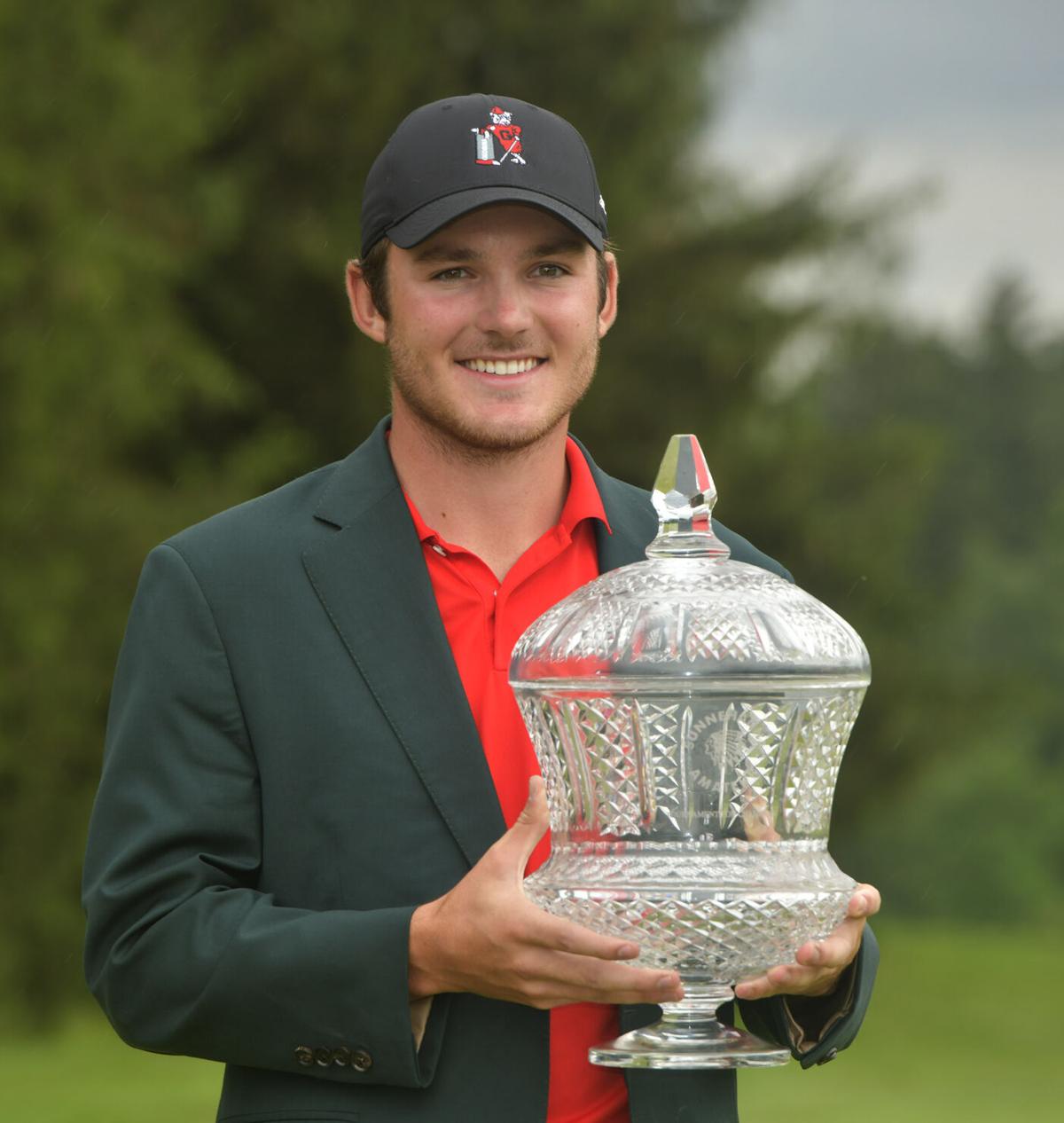 Trent Phillips of Inman, South Carolina is the winner of the 68th Annual Sunnehanna Amateur tournament on Saturday, June 19, 2021.

Trent Phillips of Inman, South Carolina watches his tee shot at the par five 9th hole, during the final round of the 68th Annual Sunnehanna Amateur on Saturday, June 19, 2021.

Trent Phillips of Inman, South Carolina is the winner of the 68th Annual Sunnehanna Amateur tournament on Saturday, June 19, 2021.

Trent Phillips had played a steady round through eight holes on the final day of the 68th Sunnehanna Amateur Tournament for Champions, but the University of Georgia golfer still had dropped two strokes on a cloudy and cool Saturday afternoon.

“Believe it or not, I didn’t miss a fairway today,” Phillips said after his strong finish resulted in a 9-under 271 in the tournament and earned him the green jacket as champion.

“I was 2-over through 8 and I literally didn’t miss a shot,” Phillips said. “It goes to show you this golf course has some teeth and it showed it today, especially with the soft greens.”

In his fourth Sunnehanna Amateur appearance, Phillips, of Inman, South Carolina, showed resolve and patience to finish his round at 2-under 68. Plus, he had a boost from one of his favorite items on the menu at the small concession stand located between the ninth and 10th holes at the par-70 Sunnehanna Country Club.

Phillips thanked his father, the Sunnehanna Amateur committee and his host family during the trophy presentation on the 18th green. He saved one extra word of appreciation.

“The girl in the ‘ugly dog’ stand,” Phillips said to laughter as he addressed the gallery. “She worked really hard and I had about three of those every time I made the turn.”

Phillips described the “ugly dogs” as a hamburger shaped like a hot dog.

Whatever works. Coincidentally, Phillips had three of his five birdies on the back nine in the final round – Nos. 11, 12 and 13.

Siebers made birdie putts on four of his first five holes in the final round and added three more birdies on 11, 12 and 15. He bogeyed 2 and 7.

“I got some putts to drop early and I think that really fueled me the rest of the way,” Siebers said. “I’m glad to be able to play well, even though I came up just short.”

Siebers said he realized he was in contention “somewhere around the turn, or even earlier than that.”

He said: “I birdied four of the first five, and I knew at that point I was hopefully going to have a chance to win by the end of the round. I continued to just stick with the game plan, shot by shot, and hopefully make a couple birdies on the back, like I did.”

Oklahoma State golfer Leo Oyo, of Tokyo, Japan, and the University of Notre Dame’s Palmer Jackson, of Murrysville, finished tied for fourth at 6-under 274.

Oyo had five birdies and an eagle on No. 11 as well as a bogey on his second hole.

A total of 100 golfers competed in the Amateur. After Friday’s cut, 53 players participated in the final round.

“Experience out here is huge,” Phillips said when asked how his three previous appearances at Sunnehanna helped him. “I really highly doubt many first-timers come here and win. It’s just one of those golf courses you’ve got to know where to hit it. It’s 6,400 yards and it looks very eye-opening and easy to attack. But, man, when you get on the greens, it’s something else.

“Experience definitely played a big role for me this week, especially knowing once you make the turn, there are some birdie holes you really have to take advantage of, and I did that today.”

University of Georgia golfer Trent Phillips began the third round of the 68th Sunnehanna Amateur Tournament for Champions in a tie for fifth place.