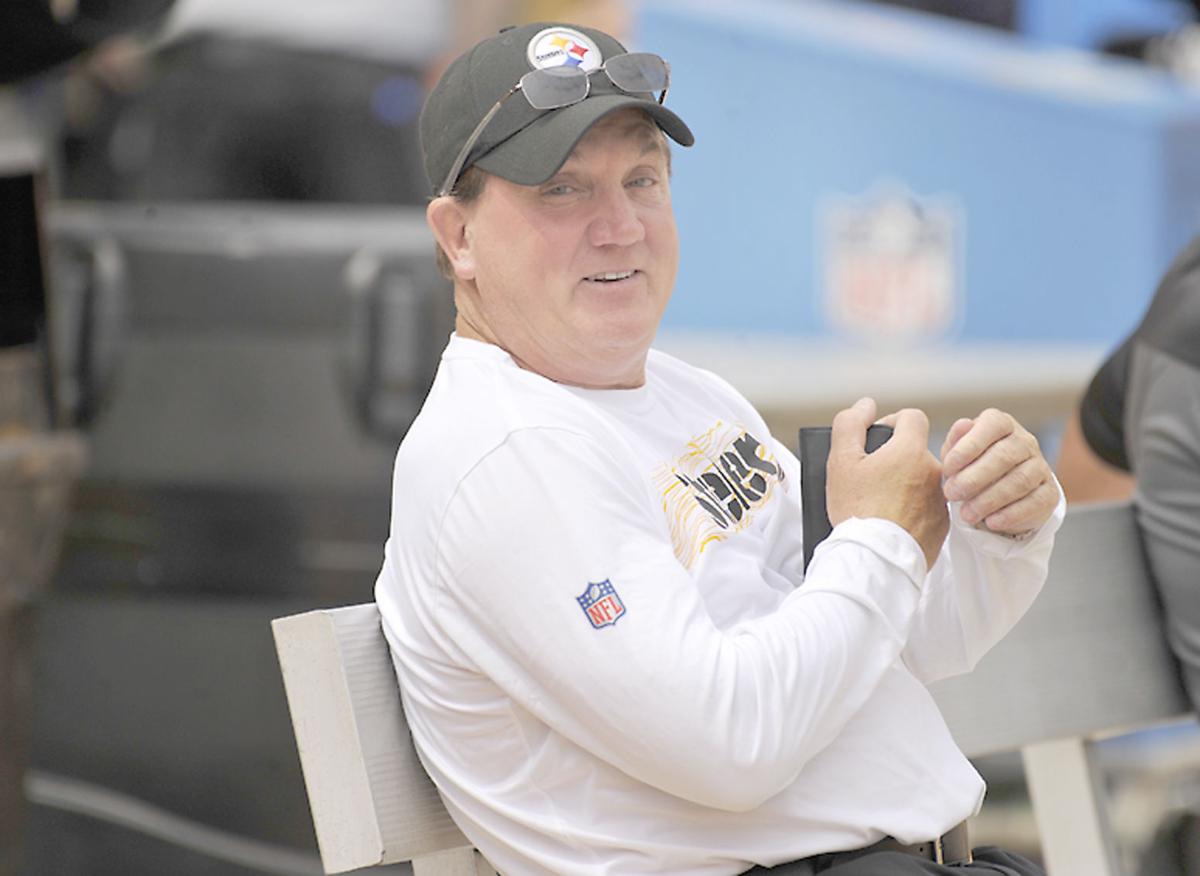 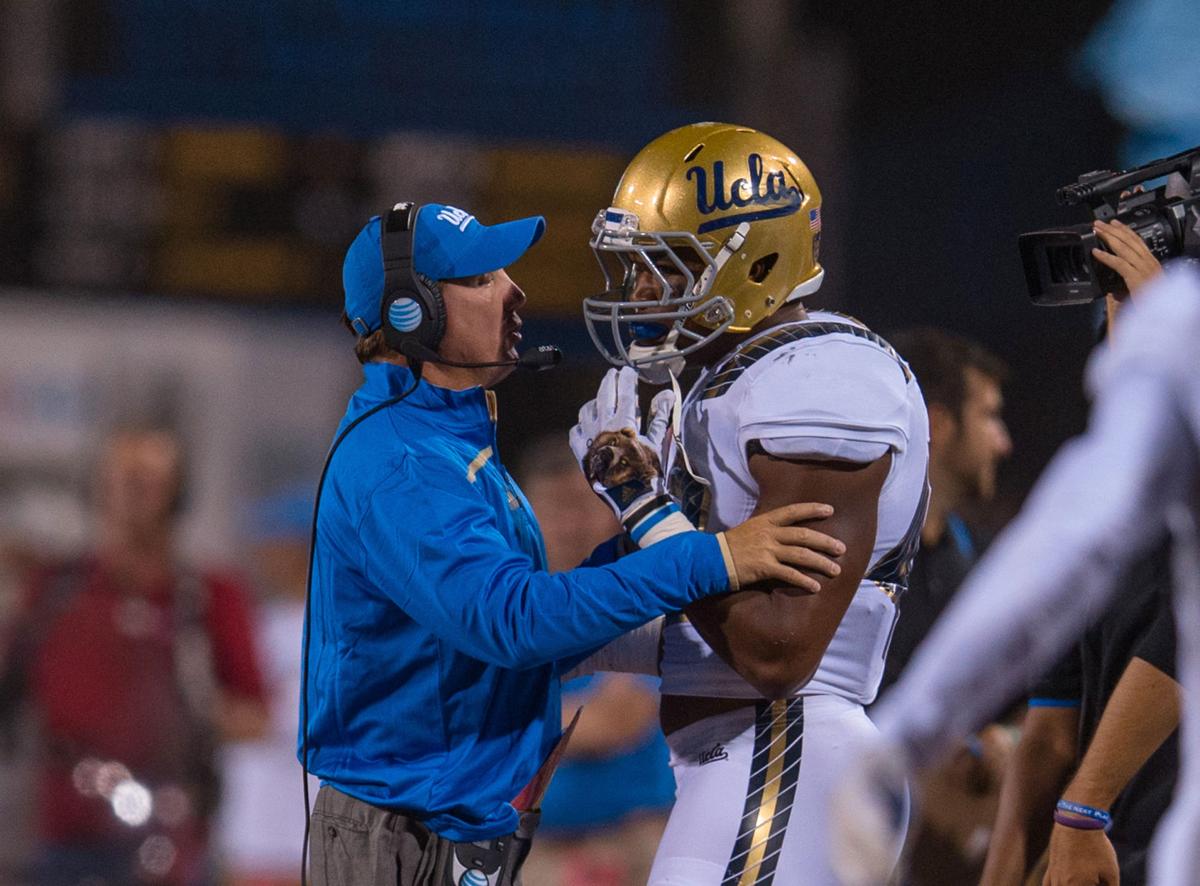 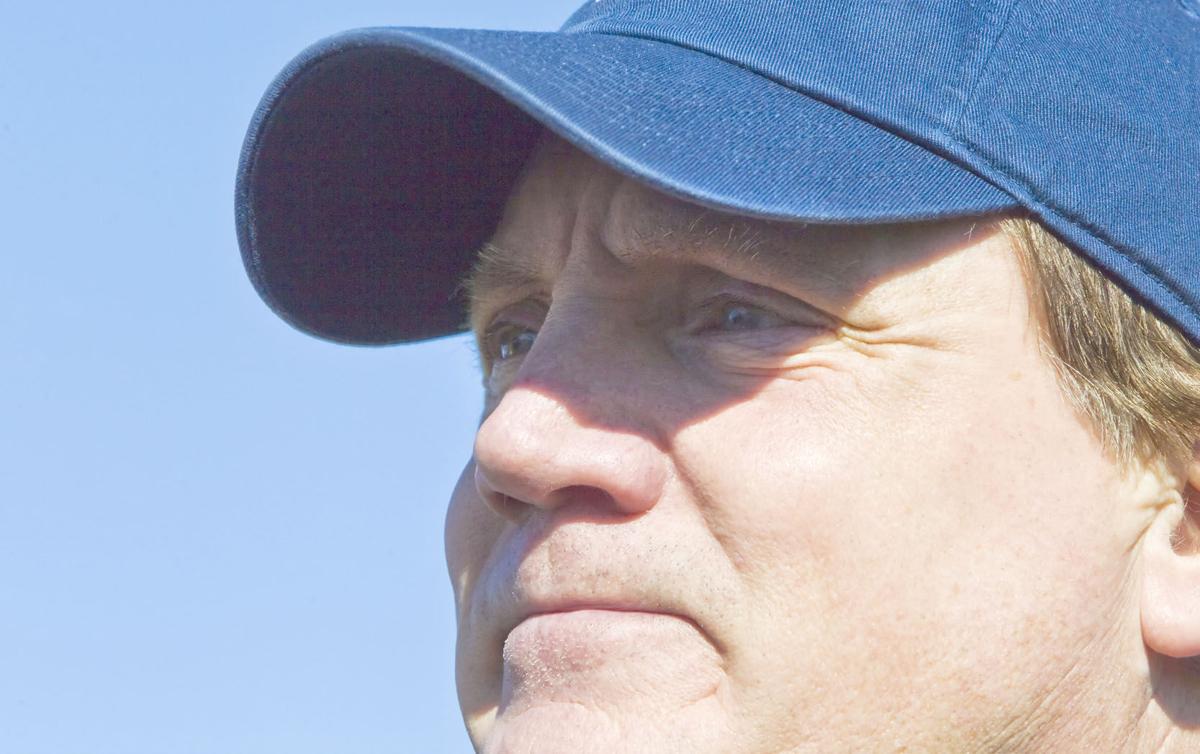 In this Dec. 27, 2011, file photo, then-Penn State Interim coach Tom Bradley looks on before practice in Dallas. Bradley has been defensive coordinator at UCLA for less than two months where he is still learning where to go during practice, what his players can do, and how to meld his philosophy and terminology with what is already in place. 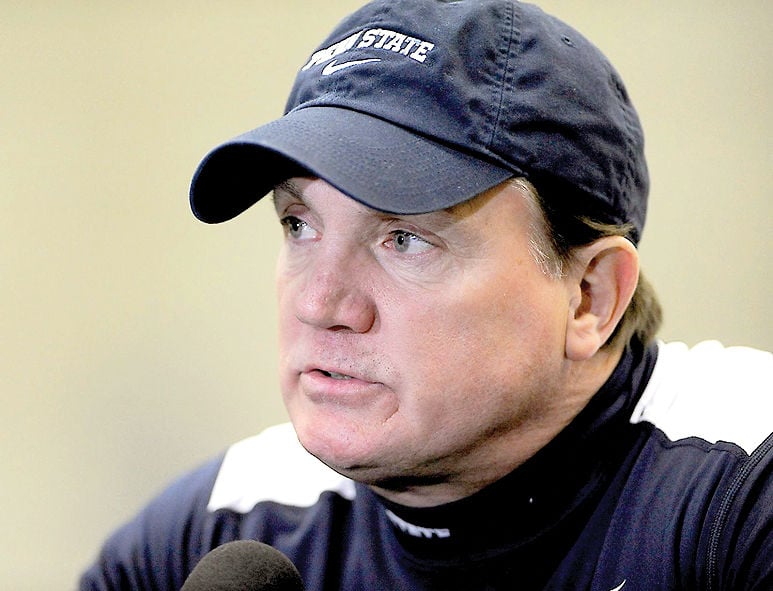 Tom Bradley speaks to reporters during his time at Penn State. 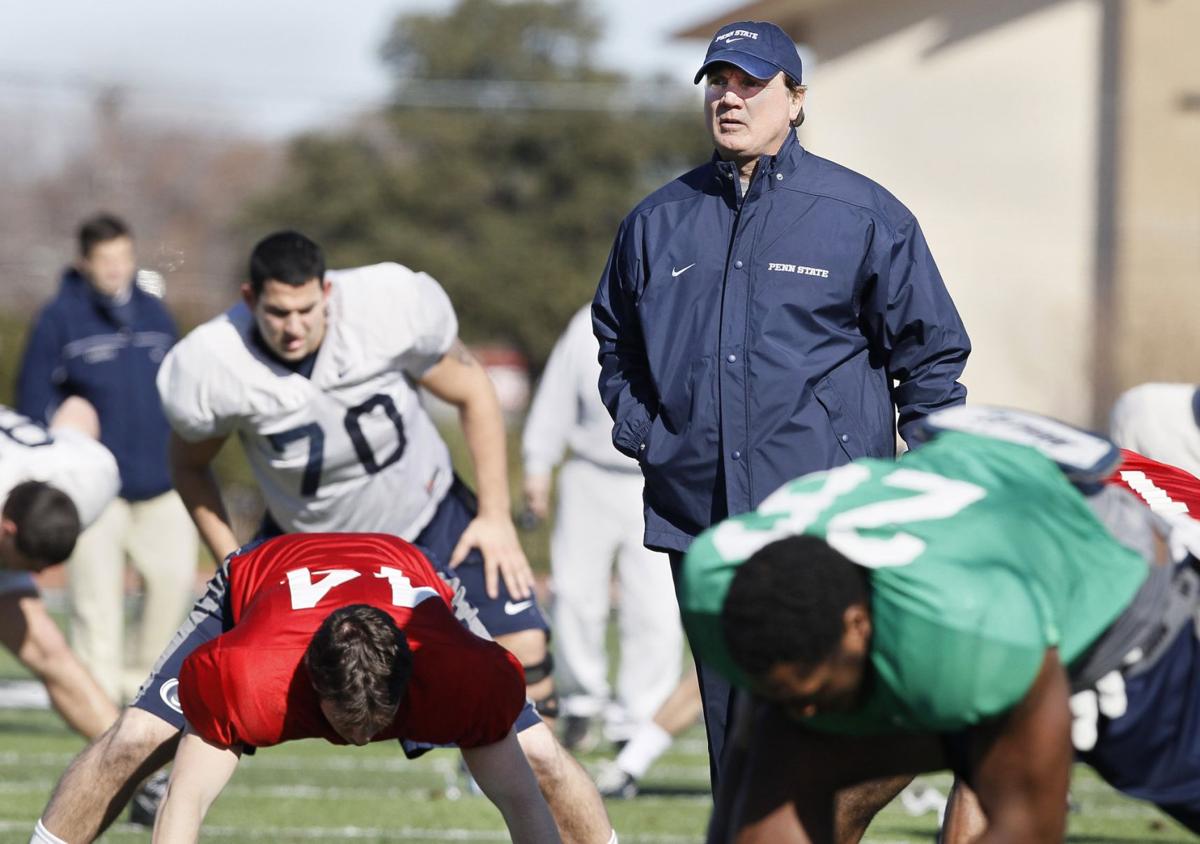 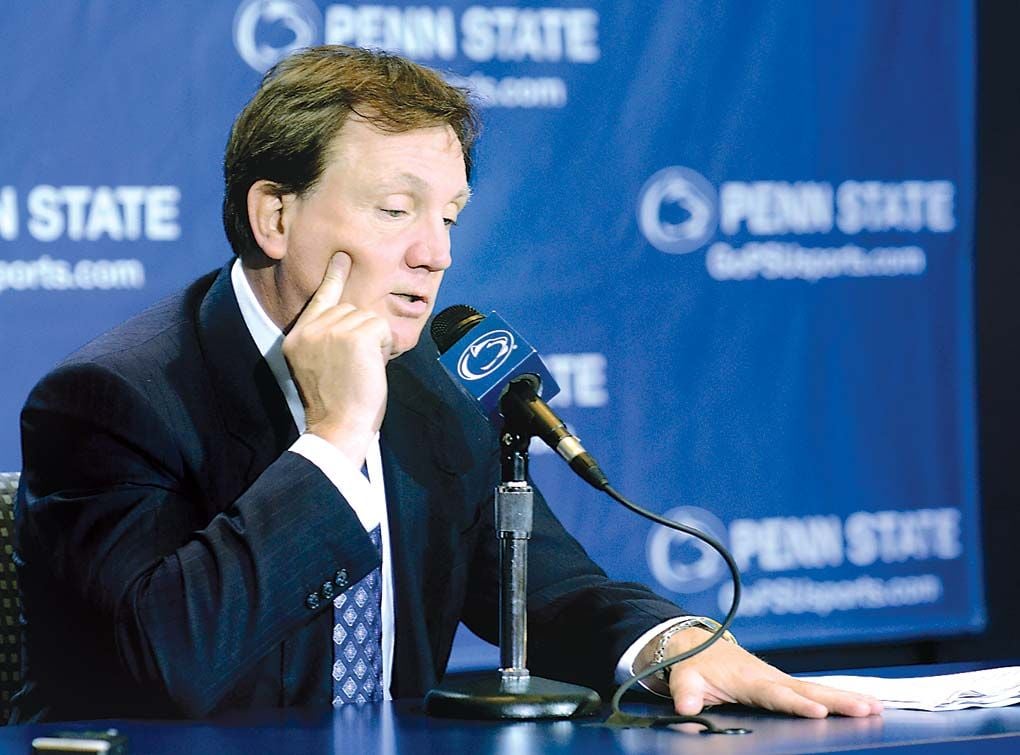 In this Dec. 27, 2011, file photo, then-Penn State Interim coach Tom Bradley looks on before practice in Dallas. Bradley has been defensive coordinator at UCLA for less than two months where he is still learning where to go during practice, what his players can do, and how to meld his philosophy and terminology with what is already in place.

Tom Bradley speaks to reporters during his time at Penn State.

Johnstown’s Tom Bradley spent much of this week discussing the NFL Draft with the Pittsburgh Steelers' coaching staff.

The Steelers' defensive backs coach and former Penn State defensive coordinator still had a few moments to reflect on a new title:

The Bishop McCort High School graduate will be inducted into the Class of 2020 during the event’s 58th banquet on Nov. 14 in Pittsburgh.

“It’s really a great honor to be put in there,” Bradley said during a telephone interview on Wednesday. “If you look at some of the names, you’re like, ‘Wow.’ There are just so many tremendous people. Everybody forgets how many great people, great athletes have come from this state.”

“There have been so many great athletes and people who have come out of Johnstown,” Bradley said. “It’s pretty neat.”

Bradley joined the Steelers coaching staff in February 2018 and is preparing for his third season under coach Mike Tomlin.

“It’s really interesting to watch it as it develops,” Bradley said of the NFL Draft, which begins on Thursday and runs through Saturday. “(Steelers GM) Kevin Colbert spearheads the whole thing with Mr. Rooney (Steelers President Art Rooney II). There is not a detail that’s not covered in this draft. It’s a heck of an effort to get it done and get the picks going.

"We don’t have a first (round) pick, but, hey, we got a first pick – Minkah Fitzpatrick, an All-Pro last year. That’s a great start. It’s going to be interesting to see for us what comes out of it after Day 1.”

The Steelers traded away their 2020 first-rounder to the Miami Dolphins for Fitzpatrick during the past season.

The draft will be held in Bristol, Connecticut, but in-person attendance is prohibited due to the COVID-19 pandemic.

The coronavirus crisis has kept Bradley and the rest of the Steelers organization away from the traditional day-to-day routine of a NFL team.

“It’s interesting because these meetings, we don’t go into the office at all,” Bradley said. “Everything is done by phone. You’ve always got to remember to turn on your mute button. It’s going to be an interesting offseason.

“Coach Tomlin and Kevin Colbert, don’t really deal in hypotheticals. When they tell us what to do, we’ll be ready to do it with Mr. Rooney (President Art Rooney II) and everybody,” he said of the league's plans to address COVID-19. “Everybody is in the same boat. You try to do the best job you can. Obviously it’s going to be different for a lot of people, especially those who aren’t as technology-savvy as some people are.”

Bradley graduated from Bishop McCort High School in 1974 and played under Joe Paterno at Penn State from 1975-78. He earned letters his final two seasons as the Nittany Lions went 22-2 and played Alabama in 1978 national championship game.

Bradley spent 33 years on the Lions' coaching staff, serving as defensive coordinator from 2000 to 2011. He was the interim head coach in four games after Paterno was fired amid the Jerry Sandusky child sex abuse scandal.

West Virginia University hired Bradley as a senior associate head coach in 2014. He was defensive coordinator at UCLA from 2015 to 2017.

“I played football against Tom when we were in high school. We played in the Ken Lantzy game together in 1974,” said Bishop McCort Catholic High School Athletic Director Ralph DeMarco, a Windber High graduate. “Since those days, we’ve been very close friends. You won’t find a nicer guy. He’s a special friend. He treats everybody with great respect. For him to be honored in this way, he deserves it.”

Bradley spoke to the Bishop McCort Catholic football team at a banquet in January 2019. He credits his hometown for instilling a strong work ethic.

“You’re really quite blessed to have the opportunity to grow up in Johnstown,” Bradley said. “From grade school on up, everybody lives on football, basketball, baseball. That’s how you learned to play. You were lucky enough to have good mentors and people to coach you along the way.

"That’s one of the great things about it. You were doing things in grade school that some guys weren’t learning until late in high school. You had some great opportunities.”

'No place like home': Bradley returns to alma mater to speak at Bishop McCort football banquet

Tom Bradley made his return to Johnstown on Sunday night to serve as the guest speaker at the Bishop McCort Catholic football banquet.