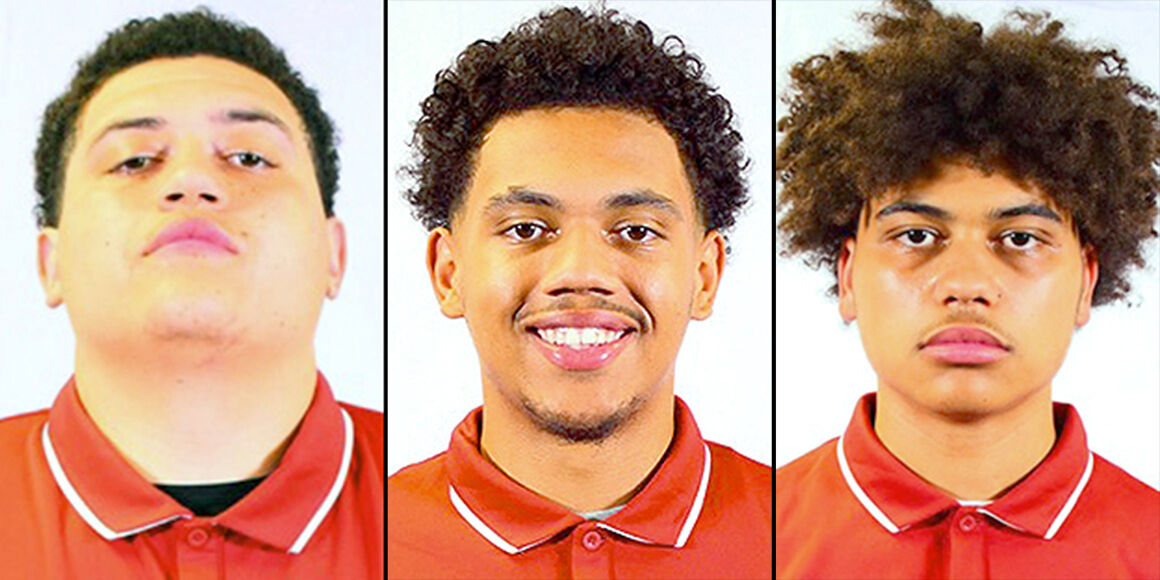 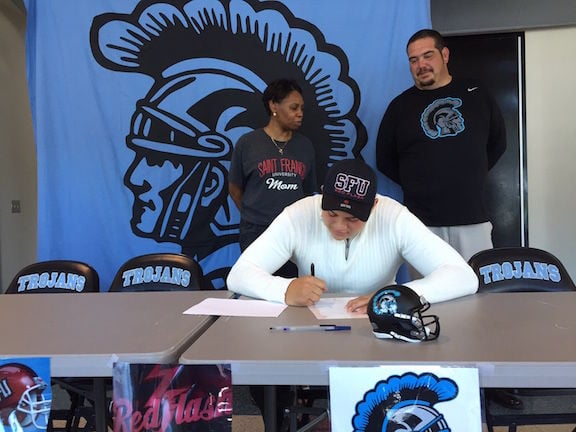 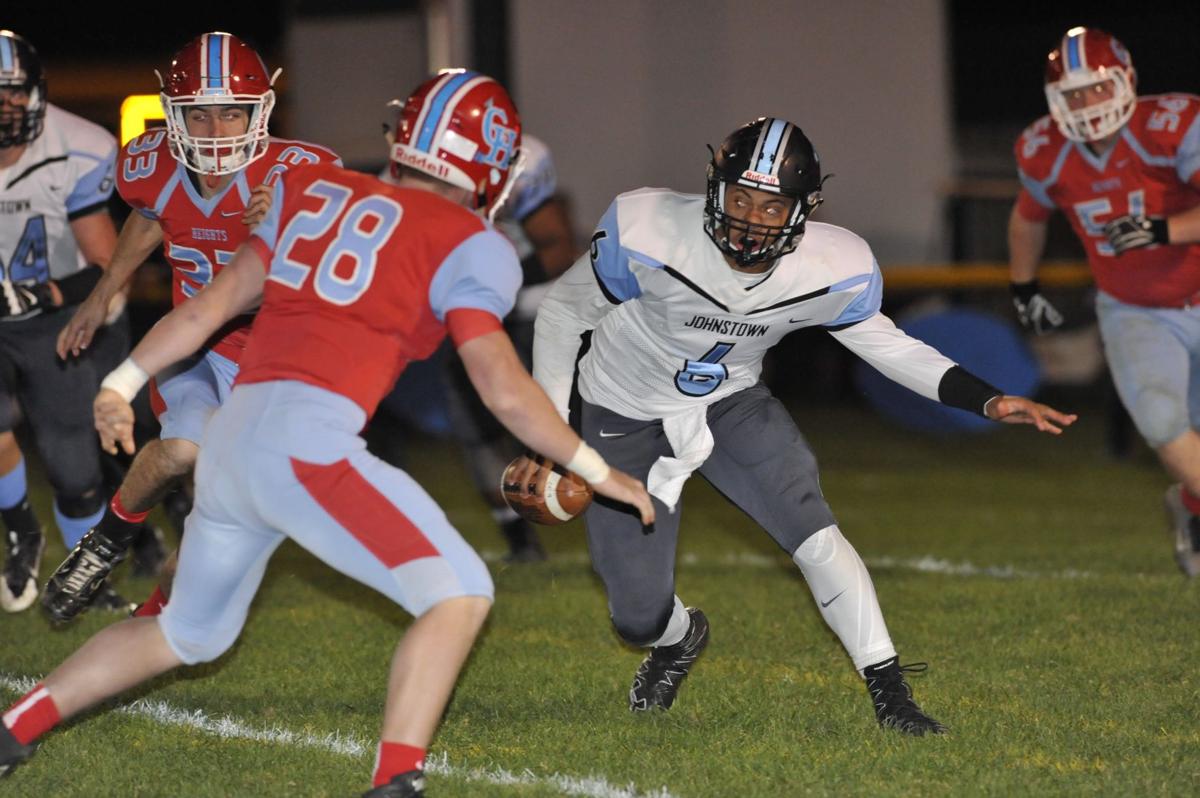 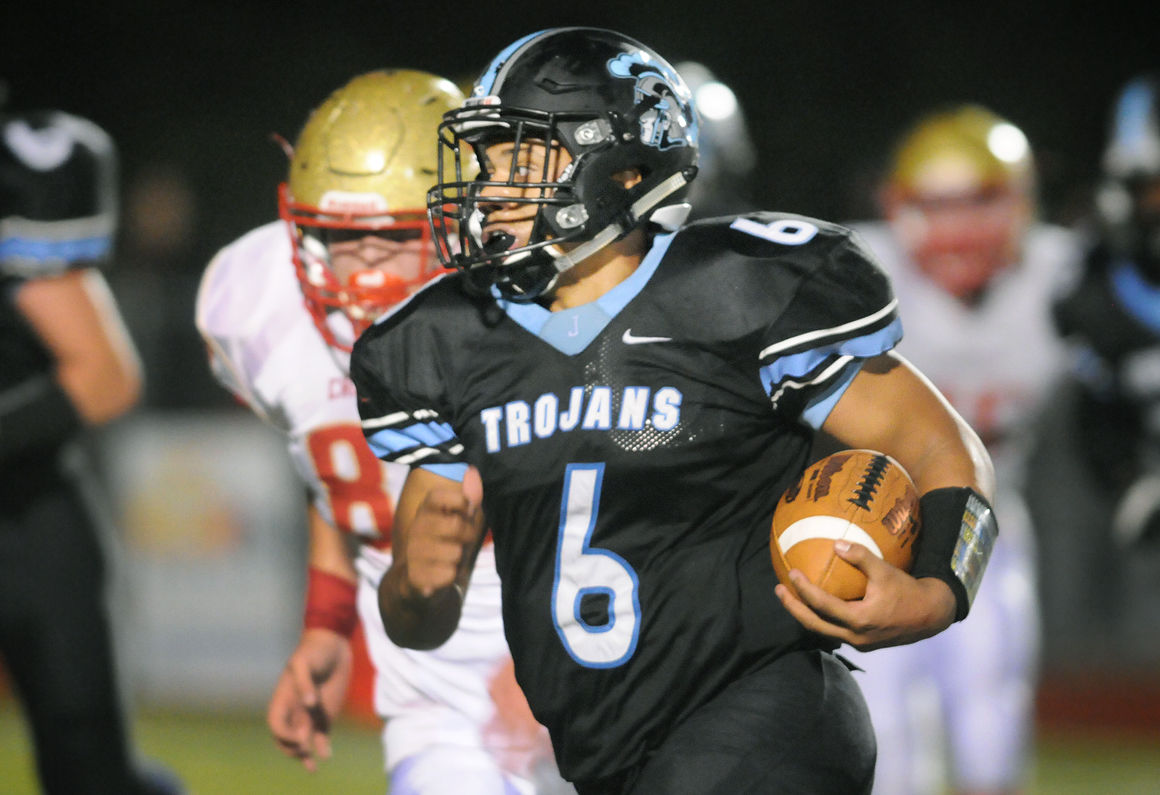 Greater Johnstown quarterback Austin Barber runs against Bishop McCort Catholic during their game on Friday, Oct. 13, 2017. Barber ran for a touchdown and threw for two more in the Trojans' 23-15 victory. 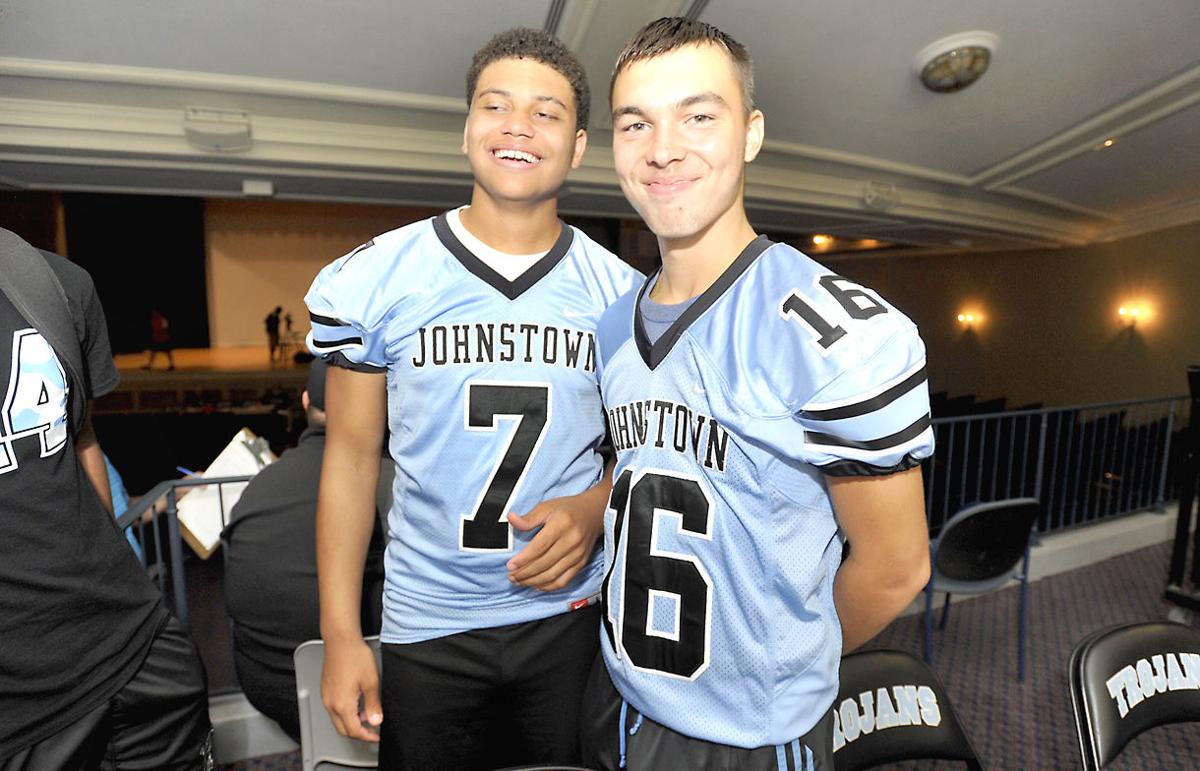 Greater Johnstown quarterback Austin Barber runs against Bishop McCort Catholic during their game on Friday, Oct. 13, 2017. Barber ran for a touchdown and threw for two more in the Trojans' 23-15 victory.

A freshman quarterback, Sammy Barber is the third Barber brother to earn a spot on the Lock Haven University roster, joining his older siblings Anthony, a 6-foot-5, 295-pound senior lineman; and Austin, a 5-11, 205-pound junior linebacker.

“They helped me a lot,” said Sammy Barber, who graduated from Greater Johnstown in 2020.

“Watching film, it is always nice to have other people, especially my brothers who I look up to, and take another person’s input.

“I see football from a different perspective. I see how they watch film.

Lock Haven University senior director of athletic communications Doug Spatafore said his unofficial research has found no other Pennsylvania State Athletic Conference (PSAC) program with three brothers on the same football team this season. Spatafore noted that the Pac-12’s University of Utah has three brothers and a cousin on its roster.

Lock Haven joined the rest of the PSAC in canceling the football schedule in 2020 due to the COVID-19 pandemic.

Sammy Barber saw his first action late in Lock Haven’s 59-0 loss at California (Pa.) University this past Saturday. He completed 3 of 7 passes for 21 yards and tossed an interception on a desperation throw in the closing seconds. The youngest Barber ran for 18 yards on two carries.

“It’s obviously unique to have three brothers on the same team,” said Lock Haven head football coach John Kelling. “Each brings a unique personality and skill set to the team, and all three are making an impact for us.

“Austin and Anthony are both returning starters and we are relying on their experience and leadership on the field. Samuel saw action at quarterback last week at Cal, and all three will continue to help move the program forward this season.”

Anthony Barber began his college career as a two-year starter at St. Francis University in the NCAA Division I FCS Northeast Conference. He started all 11 games at guard as a freshman in 2017 and made 18 tackles after a move to defense in 2018.

Anthony Barber, a 2016 graduate of Greater Johnstown, transferred to Lock Haven to join Austin Barber, a former Trojans quarterback who passed for 4,241 yards and 48 TDs before graduating in 2018.

“It’s a dream come true,” Anthony Barber said of playing alongside his brothers.

“Especially because when I was in Johns- town and my brother (Austin) got hurt his sophomore year, which was my senior year (in 2015), that deprived me of having experience playing with my brother.

“Watching them grow and turn into young men, it’s a dream come true. It’s like looking in another mirror.”

Austin Barber played in 11 games at Lock Haven in 2018 and made 32 stops. As a sophomore in 2019, Austin played 11 games and tallied 53 tackles and an interception.

“Being on the same team together as brothers, it was a great experience to be able to play at the next level all together as one unit,” said Austin Barber, who quarterbacked Johns- town to 20 wins and two district championship game appearances, with one title.

“In football in high school, we never really got a chance to play on the same team because Anthony was older.

“College gave us the opportunity to play on the same team together. It’s a great experience being able to watch my older brother play on one side of the ball and watch my little brother develop into a collegiate quarterback.”

The Barbers also have each other’s backs away from the football field.

“The transition was no different from being at home or being back in high school,” Anthony Barber said. “We’re on top of each other. We make sure everybody goes to class and is at the right place at the right time. We police each other. Everybody has a mutual respect for each other. Everything moves like a smooth ship. We’re all in awe that we’re all here.”

Austin Barber agreed that the family ties have made an impact on all three of the siblings.

“One thing is we always keep pushing each other and keep working hard,” Austin Barber said. “We make sure no one is slacking off. Keep working. Keep grinding. Make each other better every day in practice. Always encourage. Always keep positive energy.”

When Sammy Barber entered the one-sided loss at California, Austin Barber said it raised the energy level just a bit on the Lock Haven sidelines because a young player was getting an opportunity.

“I was so excited for him,” Austin Barber said of watching Sammy’s debut. “I was so happy to see him playing in his first college game and watch him do pretty good.

“He was calm, cool and poised in a college game. That made me happy.”

Sammy Barber, who passed for more than 2,000 yards as a senior and 3,431 yards during his Trojans career, focused on the moment.

“It was exciting to get into a game for the first time ever in college football,” Sammy Barber said. “I never expected to get in this early. I’m so happy the coaches believe in me and trusted me. My family, the whole organization trusted me.”

Having the Barber brothers on the same roster also has benefited family and friends who used to have to decide whether to travel to Loretto or Lock Haven on Saturdays in the fall.

“At first, I was at St. Francis. It was difficult for my father to pick and choose,” Anthony Barber said of game-day decisions his father Sam Sr. faced. “ ‘Who do I want to see?’ It was hard. My dad tried to compromise. ‘Whoever is closer is the one we’re going to.’ ”

“It’s great to have the whole family come out,” Sammy Barber added. “They don’t have to make a decision on where to go. All three of us are up here. I know I’m going to have my biggest supporters in the stands.”

Nick Subich sees a lot of potential in Greater Johnstown High School recent graduate Sammy Barber. In the classroom. On the football field.