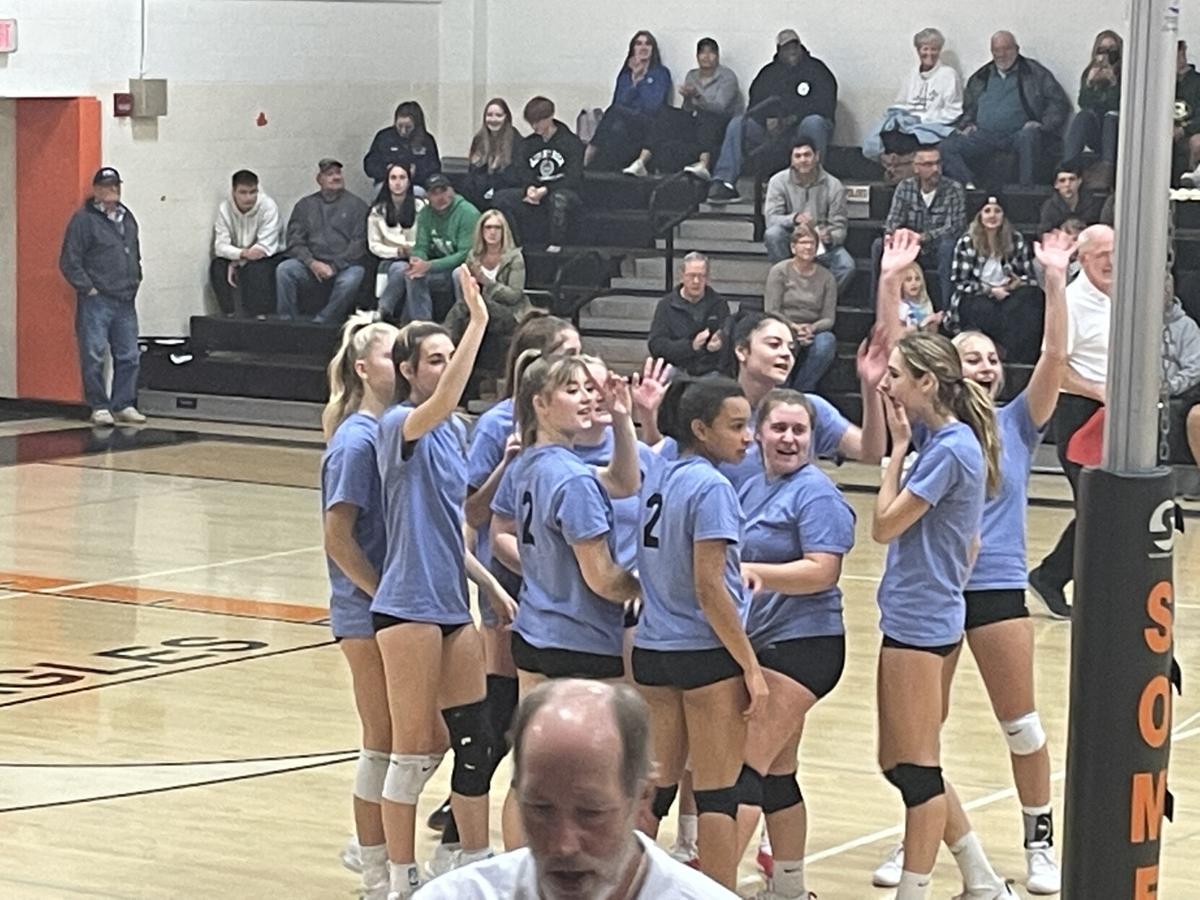 The Johnstown Area all-stars wave to their Somerset Area counterparts after the conclusion of the 35th annual all-star volleyball match on Wednesday, Nov. 24, 2021, at Somerset Area High School. 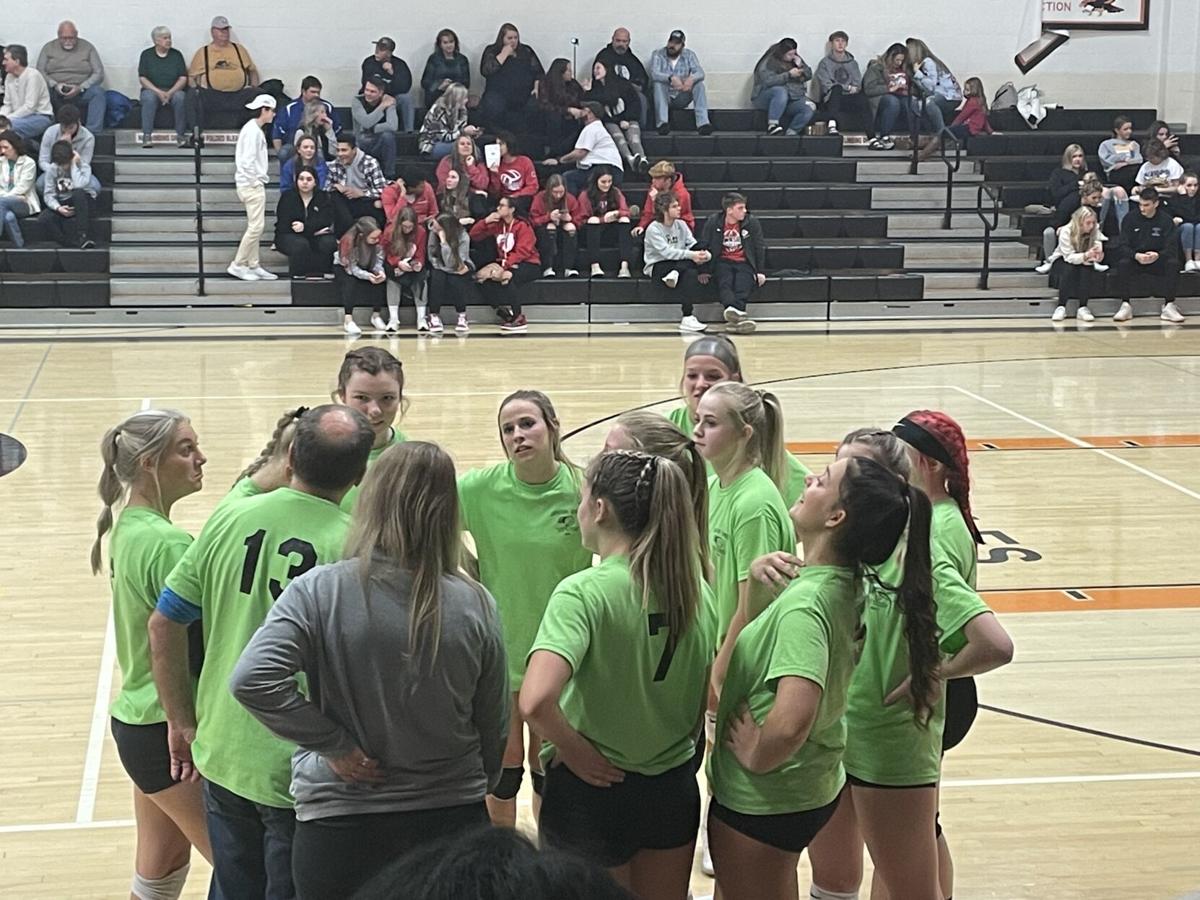 Members of the Somerset Area team listen to instructions from coach Corey Will and Elizabeth Barron during the 35th annual all-Star volleyball match on Wednesday, Nov. 24, 2021, at Somerset Area High School.

The Johnstown Area all-stars wave to their Somerset Area counterparts after the conclusion of the 35th annual all-star volleyball match on Wednesday, Nov. 24, 2021, at Somerset Area High School.

Members of the Somerset Area team listen to instructions from coach Corey Will and Elizabeth Barron during the 35th annual all-Star volleyball match on Wednesday, Nov. 24, 2021, at Somerset Area High School.

“We just found a lot of energy, that’s really it,” said Johnstown Area team member and Westmont Hilltop senior setter Chloe Hoffman, who recorded a match-high 30 assists. “When someone gets a good kill, we bring it all back.

“That’s really what it takes in one game.”

A service error and a block from Portage’s Julia Papcun brought Johns- town Area within 13-11. A kill from Richland’s Madison Sciarrillo and a Somerset Area hitting error knotted the game at 13-all. Somerset Area was called for a net violation, which resulted in coach Corey Will calling timeout. Portage’s Sydni Sossong finished off the match with an ace for her fifth straight service point to cap off the exciting comeback victory.

“I think in the fifth set, all it takes is one kill for us to come back on top,” Hoffman said. “That’s what we did. We did what we needed to do.”

Proceeds from the event will go to the Conemaugh Township Rotary’s “Twelve Wishes of Christmas.”

“It’s quite an honor, quite a privilege to be asked to coach this group of kids,” Will said. “It’s a great charity that the funds go to. Win or lose, this is about giving the girls one last opportunity to play, compete and have a little bit of fun together. Tonight was a lot of fun because we were able to put a match together that was competitive.

“It went five, 15-13 in the fifth. It was two very balanced teams and two talented squads. It’s always a lot of fun.”

Despite trailing by as many as five points in the first set, Somerset Area scored the final four points to prevail.

A Snyder ace tied the set at 23-all. A net violation called on Johnstown Area was followed by a cross-court kill from Berlin Brothersvalley’s Chloe Broadwater to win 25-23.

Johnstown Area rebounded from a slow start in the second set thanks to mini service runs by Ferndale’s Hailey Berg and Sossong to lead 17-9. Strong hitting from Kleinmeyer, Koeck and Sossong propelled Johnstown Area.

Hoffman led a 7-0 surge with six service points as Johnstown Area evened the score with a 25-11 triumph.

Johnstown Area led from the start of the third set. A 4-0 run with Berg serving allowed Johnstown Area to lead 19-12 as Will called timeout to try to break the momentum. The set ended on a Hoffman ace at 25-16.

More cohesive play was witnessed as the match lingered on due to players becoming more familiar with each other in certain rotations.

“We had one practice coming into this. I talk during my high school season that chemistry is so important,” Will said. “Until you have a chance to actually play a little bit and get used to that girl that’s playing next to you and know what she’s going to do, it takes a couple sets to really get into the flow of the game. It did this evening. Once they started to figure it out, you can see the talent of the girls.”

Somerset Area burst out to a 5-1 lead in the final set. A Snyder ace helped set the pace.

Johnstown Area called time- out trailing 9-4 after an ace from Smith. Four straight points with Gunby serving was capped by a Kleinmeyer kill as Johnstown Area battled back to force a 9-all tie. Three points with Maldet serving set the stage for the thrilling comeback.

Hoffman cherished the opportunity to compete one last time in her scholastic career.

“It was totally unexpected for me to be in the game,” Hoffman said. “I was really excited to play with girls from all over and one of my teammates also.

“It was just really fun.”