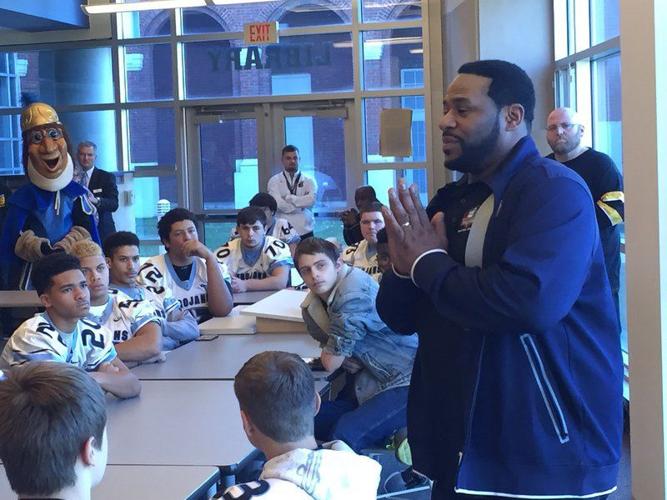 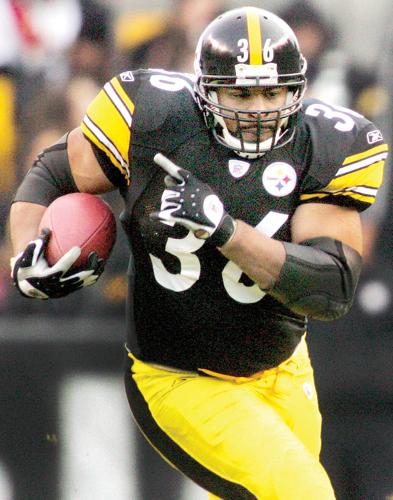 FILE - In this Jan. 1, 2006, file photo, Pittsburgh Steelers running back Jerome Bettis carries the ball for 12 yards and a first down against the Detroit Lions in an NFL football game in Pittsburgh. Bettis waited five years to be elected to the Pro Football Hall of Fame. The celebration in Canton, Ohio, was held on Saturday, Aug. 8, 2015, when he is inducted. (AP Photo/Gene J. Puskar, File)

FILE - In this Jan. 1, 2006, file photo, Pittsburgh Steelers running back Jerome Bettis carries the ball for 12 yards and a first down against the Detroit Lions in an NFL football game in Pittsburgh. Bettis waited five years to be elected to the Pro Football Hall of Fame. The celebration in Canton, Ohio, was held on Saturday, Aug. 8, 2015, when he is inducted. (AP Photo/Gene J. Puskar, File)

Hockey? Football? The Bus will welcome fans of both sports during a stop at 1st Summit Arena @ Cambria County War Memorial on Thursday night.

Pro Football Hall of Famer and Pittsburgh Steelers Super Bowl winning running back Jerome Bettis will participate in a series of events held in conjunction with the Johnstown Tomahawks’ 7 p.m. game against the Maine Nordiques at the War Memorial.

“Eleven years ago, the Tomahawks ownership group promised to bring exciting events to Johnstown,” said Derek Partsch, the North American Hockey League team’s director of business operations. “I think we’ve done a pretty good job so far doing that. Having people like Jerome Bettis coming here to Johnstown is part of that tradition.

All fans in attendance will have an opportunity to see Bettis drop the ceremonial first puck at center ice before the game.

Two other events have previously sold out. At 5:30 p.m., Bettis will appear at a dinner for 96 people held in a large room adjacent to the home locker room area. He will talk to the crowd of diners.

Later, 100 fans will participate in a meet-and-greet session in the Party Pit under Section 9.

“Both of those events are fully sold out,” Partsch said. “We’ve seen a nice influx in the sale of tickets to the game. People will see him drop the puck.”

Bettis gained nearly 2,000 rushing yards during his final two seasons at the University of Notre Dame and was selected in the first round, 10th overall, by the Los Angeles Rams in the 1993 NFL Draft.

After three seasons, Bettis was traded to the Steelers, a transaction that benefited both parties.

Nicknamed “The Bus” because of his 5-foot-11, 250-pound frame, Bettis led the Steelers in rushing eight times in his 10 seasons in the Steel City and was a six-time Pro Bowler.

During his final season with Pittsburgh in 2005, Bettis helped the Steelers win Super Bowl XL over the Seattle Seahawks while playing in his hometown of Detroit, Michigan.

Canton had a spot for Bettis, as he was in the Pro Football Hall of Fame Class of 2015.

In May, he fulfilled a goal of graduating from Notre Dame’s Mendoza School of Business, 28 years after Bettis last played for the Fighting Irish.

While The Bus stop has created a buzz, Tomahawks coach Mike Letizia and his players will concentrate on three games in three nights against a hot opponent.

“This is certainly a big weekend and a test for us,” Letizia said. “No question, the Nordiques have been one of the hottest teams in our division, if not the hottest.

“They have a high-paced offense and a lot of weapons.”

“Having three (games) in three (nights) is always a tall task,” Letizia said. “Consistency and playing to our identity night in and night out is what we are creating.”

The Tomahawks are 6-3-1 on home ice, but the Nordiques are an impressive 7-3-1 on the road this season.

“Playing on home ice has to be something that we lean on heavily,” Letizia said. “We are hoping to have some extra juice in the building with all of the extra festivities going on.

“Then with that added juice, we need to put it into our veins for the games that will be played inside the glass.”

Five different Johnstown Tomahawks scored as the visitors edged the Philadelphia Rebels 5-4 on Sunday afternoon to take two out of three in the weekend series.