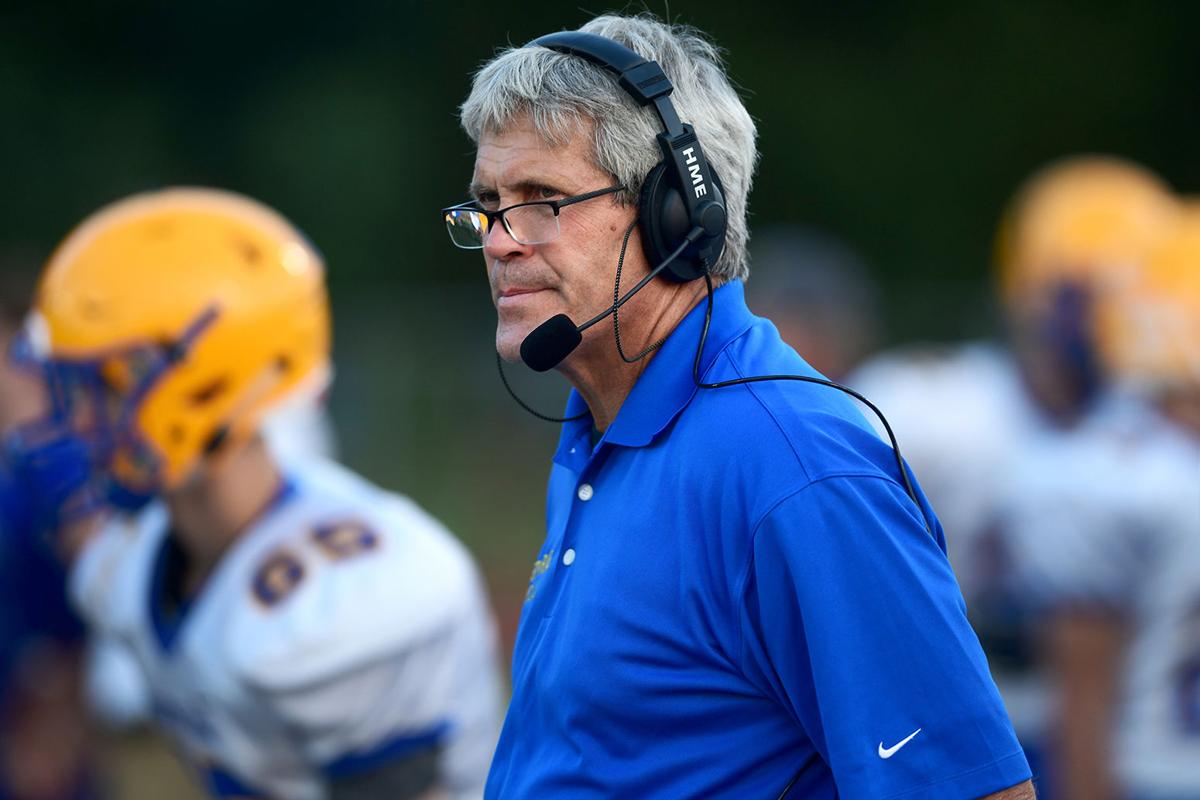 Chestnut Ridge head coach Max Shoemaker on the sidelines during their game against Greater Johnstown at Trojan Stadium on Friday, August 30, 2019. 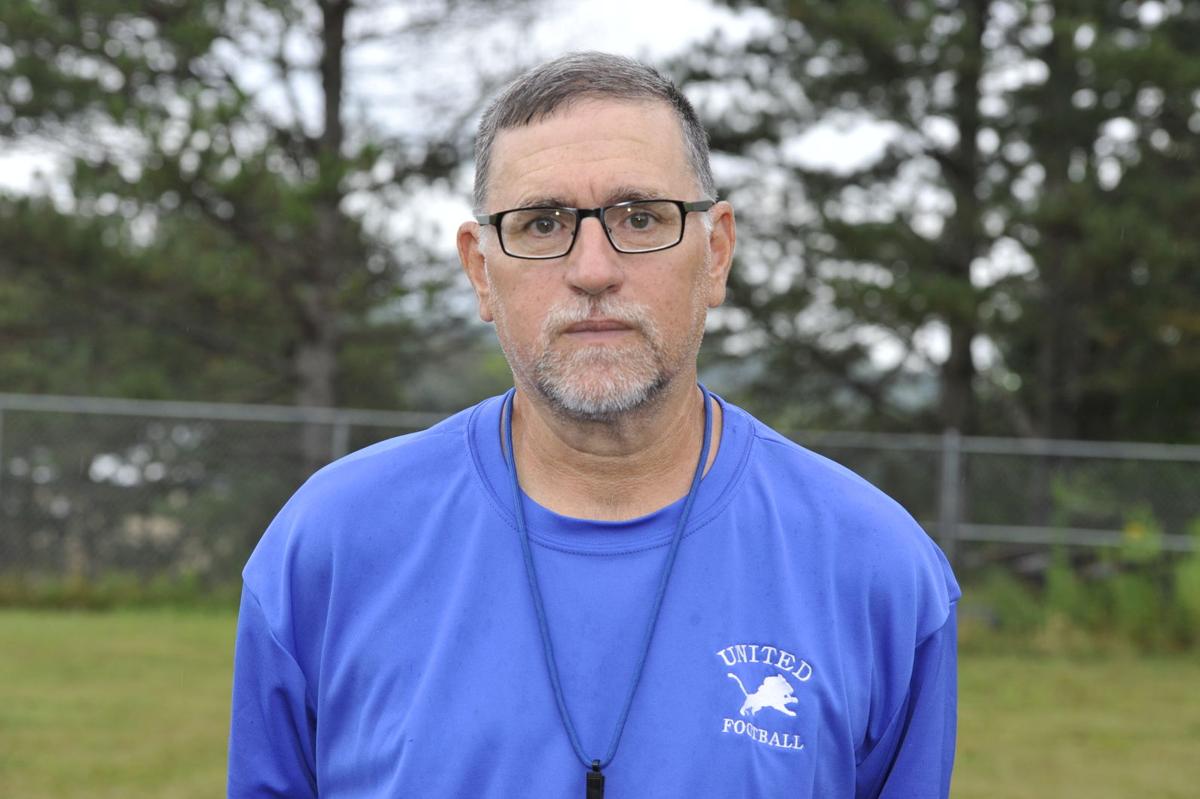 Kevin Marabito, shown in this file photo from 2015, is the head football coach at United. 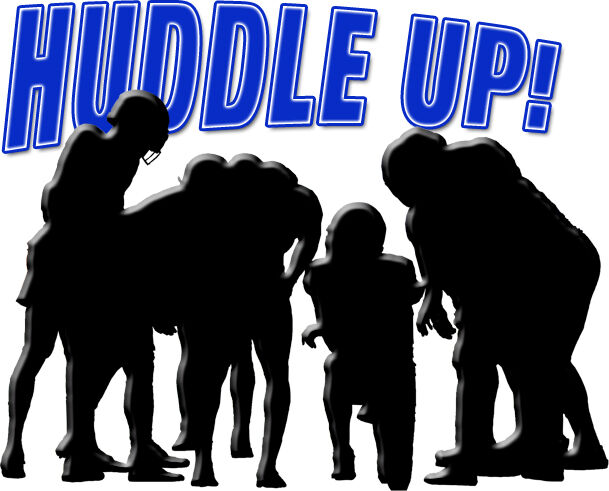 Huddle Up! is a weekly series – published each Wednesday – by The Tribune-Democrat spotlighting unique stories across the region’s high school football scene.

Chestnut Ridge head coach Max Shoemaker on the sidelines during their game against Greater Johnstown at Trojan Stadium on Friday, August 30, 2019.

Kevin Marabito, shown in this file photo from 2015, is the head football coach at United.

Huddle Up! is a weekly series – published each Wednesday – by The Tribune-Democrat spotlighting unique stories across the region’s high school football scene.

When it comes to the longest tenured head coaches on the high school gridiron sidelines, the area has four men who have been around to see numerous changes over the years.

Two of the coaches have been at multiple schools, and two have been at the same institutions for their entire careers.

The other two coaches, Doug Paul of Berlin Brothersvalley and Brandon Bailey of Richland, have each been at his respective school for 19 years.

• Shoemaker, 62, played high school ball at Bedford as a fullback and cornerback. He went on to attend Lafayette University as a wingback, graduating in 1980.

He began coaching at Claysburg-Kimmel as an assistant coach in 1981 with Jack Krider, eventually becoming an assistant at his alma mater, serving under Dean McGee until 1990.

Shoemaker took over the head coaching job with the Bisons in 1990, noting that his first year, the team was 0-9-1. He was at Bedford until 2002, then was out of coaching for five years.

He was hired as a principal at Chestnut Ridge in 2007, and had his first coaching season there in 2008. He has been at the helm ever since.

“The sophistication of both offenses and defenses is so much greater than when I first started coaching,” Shoemaker said. “It used to be that a team played one standard defense and that was it. In today’s game, it changes by down and by game and by situation.

“The same holds true with offenses. Everyone used to focus on ground attacks, and now the passing game has emerged over the last 30 years and now teams are throwing more than ever.”

Shoemaker said that he liked the fact that freshmen were added to the team rosters.

“I like a nine through 12 program because it does give you those added numbers,” Shoemaker said. “The difference between a squad of 32 and 48 is noticeable. You can divide the group and have a true jayvee squad. You don’t have as many kids going both ways.”

Shoemaker noted that the job has become more demanding and year round.

“With your offseason weight program and skill development, we give the the kids off, basically from the end of football season to Jan. 1,” Shoemaker said. “You start with morning workouts throughout the spring and go to the end of school and then start summer workouts and 7-on-7’s and that just goes into the start of your season. It really is a year-round commitment that kids are asked to make.”

He said that kids were keeping up with their football responsibilities while playing winter and spring sports.

“To keep up with everybody, you have to do it,” he said. “The commitment for kids and coaches has just exploded from where it was back in the days when I played high school ball.”

Shoemaker said that he hopes the most valuable lesson that he can teach athletes is to do the right thing.

“The lessons they learn on the football field and being associated with the program, they can learn to use good judgement,” he said. “Doing the right thing with the family or a job situation, when kids learn that to me, is what makes me feel the best.”

Shoemaker said that his wife, Nancy, has supported him throughout his career.

“You can’t do it by yourself,” he said. “It takes a lot of sacrifices.”

The Chestnut Ridge coach said that it has been a great ride and he wouldn’t trade it for anything.

“The opportunities that you have to work with youth are different than in the classroom,” said Shoemaker, who retired from being principal on June 30.

• Marabito is the most traveled of the four coaches.

He graduated from Laurel Valley High School where he played football as a guard and linebacker. He went to Indiana University of Pa. after a 10-year career in the coal mines, and did not play college football.

Marabito started as a volunteer assistant coach under Jerry Page at Laurel Valley in 1982, then became a varsity assistant with the Rams in 1984.

He returned to Laurel Valley as an assistant from 2002-04, then became the head coach at Greater Johnstown from 2007-09.

He served as an assistant coach at Forest Hills from 2010-14 before taking the helm at United in 2015.

“I was privileged to coach under two Hall of Fame coaches in Coach Page and Coach Bailey,” Marabito said. “You don’t get that kind of opportunity. I have some great memories there. Also, I was part of five District 6 championships, winning three in Class A, and one each in Class AA and AAA.”

Marabito, whose wife Sheila has supported him throughout his career, said that one of the biggest changes over the years has been in the players themselves.

“Players are changing,” Marabito said. “When you first started. Everybody wanted to play, but freshmen weren’t moved up and sophomores understood that they probably weren’t going to play varsity. Numbers were up enough that you played JV. Today, kids are coming in as freshmen and being able to play.

“It’s basically because of numbers. Participation is way down. You are competing with more sports like soccer. Class sizes were much bigger.”

The high school game itself has seen changes.

“Back when I got into it, it was mostly a run game, with two tight ends, “ he said. “You had to stop the run. With the spread offense now, you have to stop the passing game, too.”

Marabito noted that assistant coaching has gotten better over the years with guys being up to date on what’s out there.

“The time constraints you have to put in have also increased,” Marabito said. “You have to spend more and more time. I don’t think you will see the long-tenured coaches the way you did under Coach Page and Don Bailey.”

The United coach talked about exchanging film back in the day, that coaches would drive on Saturday mornings out to trade films that were shown on projectors.

“Now you play Friday, put film out to the opposing team and you have it on Saturday,” he said. “It’s a changing of times. Technology has really changed things. It’s right at your fingertips.”

Marabito said for him it’s not all about the wins.

“In my first job at Ferndale, the majority of the kids that I had, they went on to all be successful at life,” he said. “You want kids to be successful in life, whether in their professional field or as good fathers and husbands. I always felt that was my job to relay that to to them to be the best person you could be.

“No matter what my record was, if my kids were successful, I was successful as a coach. Some of the fans don’t look at it that way, but truly your job as a high school football coach is to prepare them for the next phase of their lives. That’s always been my goal.”

Marabito, 63, said that he has actually been coaching football for almost 45 years, hearkening back to the days of midget football in 1975.

“You don’t realize how long it’s been,” Marabito said. “I don’t know how many more years I will coach. Every year I sit down at the end. I still enjoy it and get excited on game day and like being around the kids. When I feel I’m not having an impact on my players, it’s time to get out.”

(Part 2 will be next week in Huddle Up).

Huddle Up! | It all starts up front: Offensive linemen fulfill important roles

While their names are not the ones that are generally in the spotlight each Friday night, they are definitely the unsung heroes of the football field.