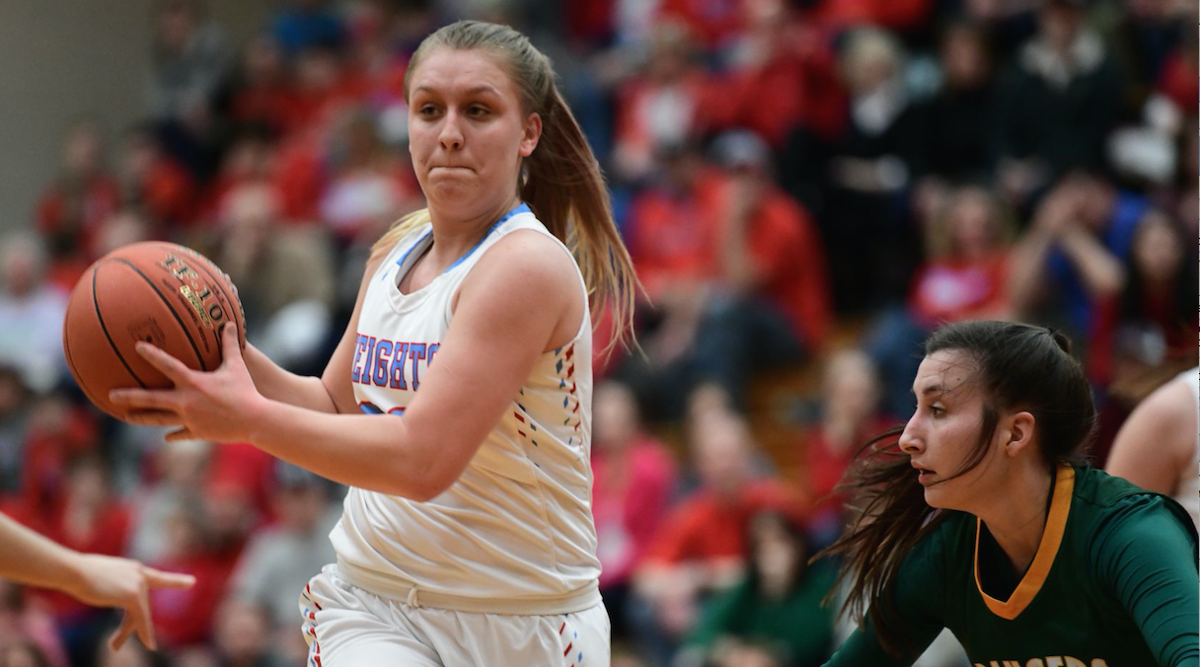 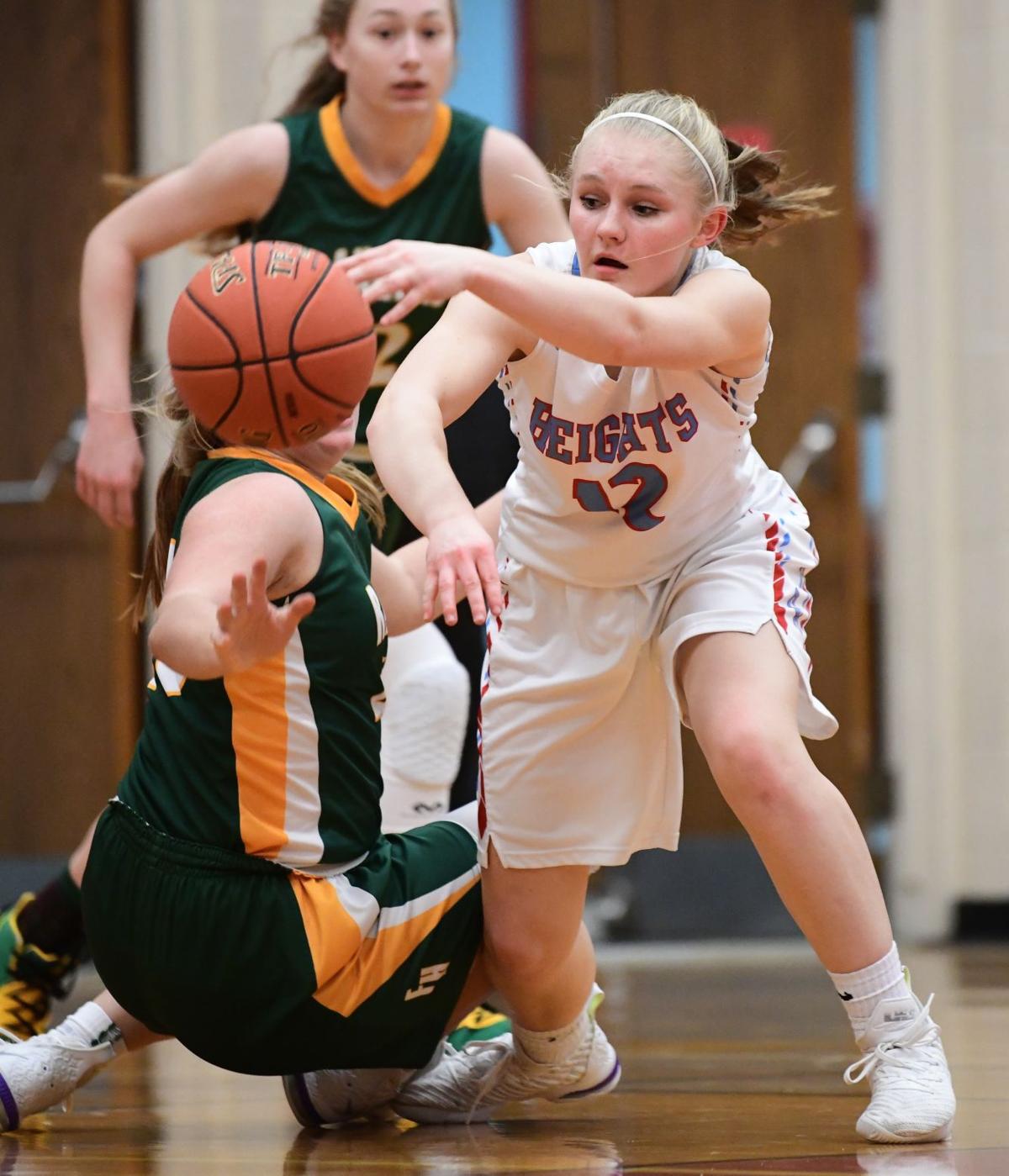 In a short span of less than 48 hours, the Cambria Heights girls basketball team experienced nearly every emotion imaginable.

On March 10, the Highlanders defeated Trinity 53-45 to advance to the PIAA Class AAA quarterfinals for the first time in program history.

Then on March 12, the PIAA postponed the basketball tournament for two weeks due to the spread of coronavirus.

From the thrill of advancing farther than any team in school history to the unknown of when their historic season would continue has hit home for the Highlanders, who have a 25-3 record after claiming their first District 6 title since 1984. Schools in the state have been closed since the end of the day on March 13. After it was announced by Gov. Tom Wolf that schools would be closed an additional two weeks on Monday, April 6 would be the earliest return date.

“For lack of better words, I would definitely say our time off is sad,” said senior Chloe Weakland. “Senior year is supposed to be filled with fun, lots of memories, different milestones, and of course, the last year with your classmates and I feel that it is all being swiped from us. It is crazy that March 13 could have been the last day of my senior year.”

“It’s really hard to think about how close we were to the state championship,” senior Abby Lobick said. “Our team has been waiting for this moment for so long, and knowing that there is a chance we may not be able to finish is making this isolation tougher than we thought.”

Lobick and Weakland are joined by senior Emily Henry and juniors Jade Snedden and Kirsten Weakland in the starting lineup. Juniors Abbie Baker and Paige Jones give the Highlanders quality depth.

Coach Amber Fees has had to deal with the uncertainty of not being able to lead her team through the season’s conclusion.

“The hardest part of this situation for me is the unknown,” Fees said. “As a coach, I am to lead and direct my players and I left work Friday (March 13) and that was it. I want to have faith and stay positive that these girls will get the chance to finish their historic season. I just pray that they get the chance for one more day and one more game.

“I understand the health risk and why these decisions are being made. This will not be an easy decision on either end for any party involved.”

Cambria Heights is slated to face District 7 champ Mohawk in the PIAA quarterfinals.

Athletes thrive on structure. Without school or organized practices, players are left to manage their own free time, which consists of chores, getting ahead on schoolwork or staying in basketball shape.

“It almost doesn’t feel real,” said Lobick, a 1,000-point scorer. “I looked forward to basketball every day, and it’s hard to process not being able to see my team and coaches at all. I’ve been trying to get outside to shoot around to try and get back the feeling of the routine I am used to.”

“There is not much to do and nothing is open,” said Chloe Weakland, who has scored over 1,300 points and will continue her hoops career at Mansfield. “I am not one to just sit around. I enjoy being able to go out and do things with my friends, family, sisters and boyfriend. It is weird, I’ve never seen anything like this.”

Along with schools being closed, students are asked to practice social distancing. The Highlanders are isolated and banned from getting together for impromptu workouts. Being kept away from close friends on the team has been one of the squad’s biggest struggles.

“These girls are truly my best friends,” Lobick said. “It hurts me to be separated from them and our coaches for this long, but I know we all have the same goal in mind. We plan on returning, and making the run we’ve been waiting for. Most of us text everyday, and we are all focused on getting through this together.”

The break in action has paused all of the momentum Cambria Heights built up during the postseason. After falling to Central Cambria, a team the Highlanders defeated twice during the regular season, in the Laurel Highlands Athletic Conference semifinals, Cambria Heights has regrouped to win the past five games.

“Of course we wanted to advance to the LHAC championship, but things did not fall in our favor,” said Chloe Weakland. “I think it lit a spark under all of us that we did not want to feel like that again. We all came together in that moment of toughness, and played our basketball from there on out.”

Lobick believes losing that game taught the team a whole lot more than winning could.

“Sometimes you need to lose to figure out how much you want something, and how hard you have to fight for what you want,” Lobick said. “We really come together in times of struggle.”

Cambria Heights beat West Shamokin and Penn Cambria in the District 6 playoffs to set up a championship game matchup against No. 1 seed Tyrone. A third-quarter surge helped the Highlanders defeat Tyrone 49-37. Then victories over East Allegheny, the program's first PIAA playoff victory since 2010, and Trinity advanced the Patton squad into the quarterfinals.

Recapturing their peak level of play will be a challenge for the squad.

"Obviously after being off of literally everything for two weeks, there will be a little rust and it may take a day or two to get back into the swing of things," Chloe Weakland said. "I think that our team has really learned through this whole experience not to take the little things, like basketball and school, for granted cause it can be over in a snap."

Lobick thinks the Highlanders could reach top gear without a hitch.

"Based on the way we had been playing, I don’t think picking up momentum will be difficult for us," she said. "The strong bond our team has this year is something that others may be missing."

Knowing they could have played their last game, Lobick and Chloe Weakland remain upbeat that their scholastic basketball journeys will continue.

“Although it is very hard, I have been trying to stay optimistic that we will play again,” Chloe Weakland said. “I have had my doubts but I, and the other team captains, are trying to stay positive for our teammates. I would be saddened to hear if they had to cancel. We still will go down in CH history, and I wouldn’t trade my career, coaches or teammates at Cambria Heights for the world.”

“We are all staying optimistic,” Lobick said. “Right now, that is really all we can do.

“We want to be back on the court more than anything, and we’re hoping that this dream is possible within the upcoming weeks.”

In years past, surrendering a double-digit lead might have been lethal for the Cambria Heights girls basketball team.

But with a group of experienced and mentally sharp players, nothing can derail the Lady Highlanders.