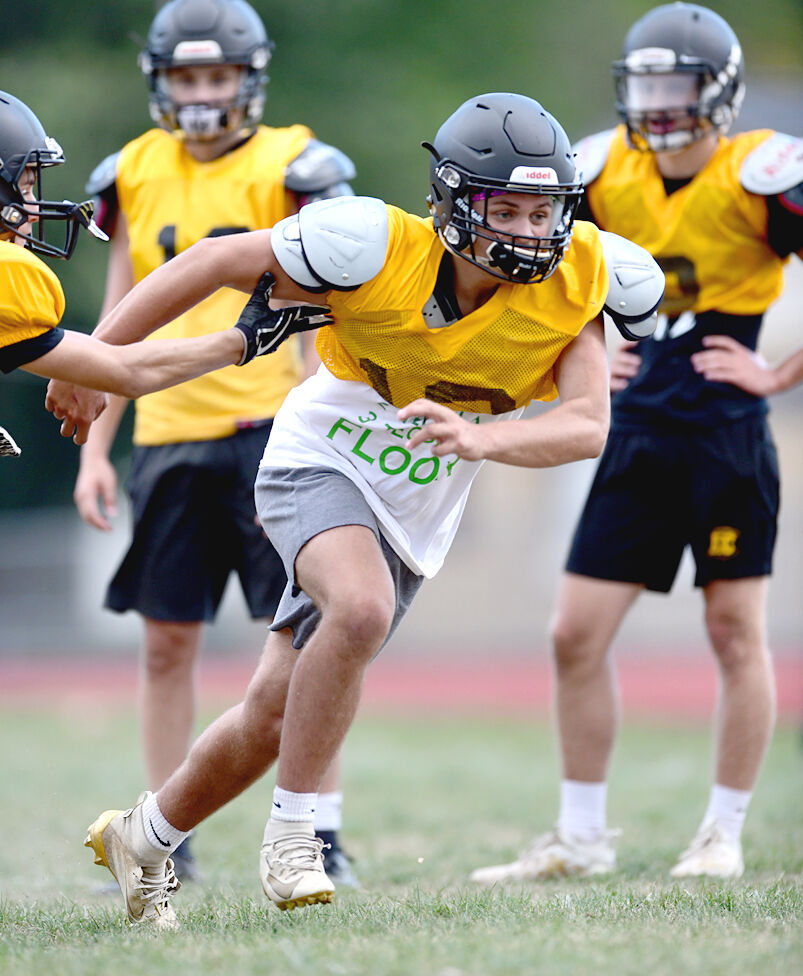 With the exodus of four-time champion Ligonier Valley (12-1) to the WPIAL and Bishop Carroll joining the league, the Heritage Conference will have a different look this season.

Homer-Center was 7-5 last season, and according to the other coaches in the conference, earned the nod as the team to chase this season in the league.

Senior Ben Schmidt returns at quarterback for the Wildcats, who topped Northern Cambria, 24-6, in the first round of the District 6 Class A playoffs before falling to Juniata Valley, 27-6.

Also back for Homer-Center are senior wide receivers Travis Mock and Drew Kochman along with junior running back Justin Walbeck.

“I think the conference will be really balanced,” Wildcats’ coach Greg Page said. “It could be anybody’s season. We have some really good rivalries and it should be a very interesting year.”

• Marion Center finished 7-4 last season, losing in the first round of the District 6 Class AA playoffs to Penns Valley, 48-12.

The team’s second leading rusher last season, Logan McCafferty returns for his senior campaign. He had 96 carries for 408 yards.

The Wolves advanced to the District 6 Class AA playoffs, falling to Ligonier Valley, 49-7, in the first round.

After a 20-12 victory over Blairsville in the first round of the district playoffs, the Red Dragons topped Portage 25-6 before falling to Juniata Valley, 31-21.

In his junior season, Syster rushed for 1,370 yards on 153 carries and scored a team-high 14 touchdowns.

Junior Jayce Brooks is expected to take over at quarterback and junior Mallo Sanchez will return to the backfield with Syster.

• Adam Kopera broke the school’s single-season rushing record with 1,696 yards on 203 carries, but Northern Cambria struggled to win, especially on the road (1-5) and finished with a 4-7 mark.

Kopera has graduated, but quarterback Mike Hoover, who passed for 1,285 yards going 85 of 134 despite missing time with an injury, returns. Also back for the Colts is senior Owen Prasko (93 carries for 777 yards) along with leading tackler senior Luke Tomallo, who had 99 stops.

Coach Sam Shutty and the Colts have 16 returning letterwinners with seven starters back on offense and seven on defense.

• Penns Manor accrued a 3-8 record and returns a number of players in skill positions this season under coach Bill Packer.

Sophomore quarterback Max Hill returns for the Comets, who had victories over Blairsville, United and North Star. Hill passed for 583 yards going 49 of 111.

The team’s top three ball carriers from last season all return including the leading rusher, senior Dimitri Lieb, who finished with 662 yards on 126 carries.

Seniors Conner Keith (473 yards on 92 carries) and Kevin Baum (294 on 25) also will give the Comets diversity in the backfield.

• Coach Rick Artley’s Blairsville squad struggled to a 4-7 mark in 2019, but returns a number of players in skill positions for the 2020 season.

The Bobcats’ victories came over United, Northern Cambria, Homer-Center and Blacklick Valley. Blairsville advanced to the District 6 Class A playoffs, falling to Heritage foe Purchase Line in the first round, 20-12, after losing to the Red Dragons, 42-16 during the regular season.

Senior quarterback Zak Artley passed for 1,502 yards going 105 of 219 through the air. Senior Devon Witmer had 45 catches for 642 yards while junior Sincere McFarlan rushed for 742 yards on 182 carries.

• Hunter Cameron returns for his senior campaign as United looks to rebound from a tough 2019 campaign (1-9) that included low numbers, injuries and a number of forfeits.

“Everyone looks at what they have back and we think that Hunter Cameron is a heck of a running back,” United coach Kevin Marabito said. “If we stay injury free, we could surprise some people.”

The Lions have 12 returning lettermen with nine starters back on offense and nine on defense. Included among the returnees is senior quarterback Eli Clevenger along with senior receiver Reece Brendlinger and junior receiver Jacob Boring.

The likely team strengths for the Lions include better numbers, having some depth at positions, more competition at practice and a very good group of freshman. Areas of concern are injuries and lack of experience for depth at key positions.

The Huskies struggled to a 3-7 mark playing in the Mountain League against much larger schools. The wins came against Philipsburg-Osceola and non-league schools Carrick and Fairfield.

Bishop Carroll has 11 returning letterwinners with four starters back on offense and three returning on defense.

The offensive line will be a strength for the Huskies, whose major concern is depth.

While the Huskies lost a number of their top offensive contributors to graduation, players to watch in 2020 include sophomore quarterback Johnny Golden, senior slot/linebacker T.J. Novak and senior wide receiver/safety Ryan Bohrer.

• Last season Saltsburg had one of its best finishes in recent history, 8-4, winning its quarterfinal-round District 6 Class A game, 39-14, against Claysburg-Kimmel before falling to eventual champion Bishop Guilfoyle, 47-18, in the semifinals.

WestPAC PREVIEW | Berlin eyed as team to beat in conference

With 25 returning lettermen and 10 starters back on both offense and defense, Berlin Brothersvalley could have the upper hand this season in the WestPAC.