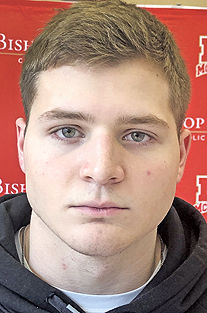 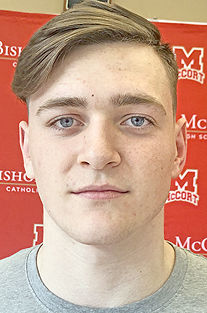 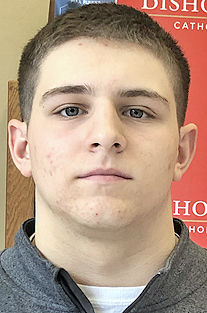 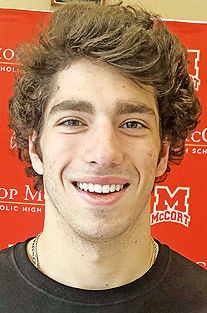 Four Bishop McCort Catholic football players signed national letters of intent to play collegiate football last week. The school held a ceremony for those players on Wednesday afternoon in the lobby of the Osborne Street school.

• Jake Ardary, California (Pa.): Ardary was a bit of a Swiss Army knife for the Bishop McCort football program during his career. He lined up all over the field, and former Bishop McCort coach Brian Basile credited his unselfishness.

“Jake Ardary is a non-stop worker in the weight room,” Basile said. “First one in and last one to leave. Very dedicated to the sport and can play a lot of different positions. I think he can play linebacker, defensive end, and can play fullback and tight end.

“He helped us out even on the offensive line, so a very unselfish kid and a real team player.”

Ardary finished with a team-high 120 tackles in the 2019 season and was announced by California as a linebacker on National Letter of Intent day last week.

“It just really felt like home,” he said of California. “I know a couple kids up there and it will just be a fun experience. They have a great football program and financially it’s just the best option for me.”

• Kole Lichtenfels, Seton Hill: Lichtenfels stepped up and had a highly productive senior year leading the Crimson Crushers in tackles for loss with 18 and also racked up nine sacks. The 6-foot and 200-pound defensive end can line up at linebacker as well at the college level and will be heading to Seton Hill University in Greensburg.

“We looked at a couple of other schools, but Seton Hill just seemed like the best fit for me and financially it just made sense for me both with academic money and earning a scholarship, that was just the best fit,” he said of Seton Hill.

“He has a very strong motor as a defensive end and takes a lot of pride in his play and is a very tough and hard-nosed kid,” Basile said of Lichtenfels.

• Nick McGowan, St. Francis: The Bishop McCort offense was centered around the ground game during McGowan’s time there. He helped pave the way for three of the top four rushers in school history. That kind of production led him to earn at spot to play at St. Francis in the NEC.

“Just the people, the coaches, the teachers - just everybody is just out of this world compared to all of the other places I went and visited,” he said of St. Francis. “Just at the end of the day from the coaches talking to me and talking to my family, it was just going to be the best opportunity to be part of a team and have success.”

Basile had this to say about one of his top linemen, “Nick McGowan, one of our captains.

“First in the weight room and last one to leave. He can play any offensive line position: center, guard or tackle, and long-snap.

• Will Miller, Seton Hill: Bishop McCort’s offense was centered around Miller in each of the past two seasons. He finished his career with 2,785 rushing yards, which ranks third all-time in the program’s illustrious history. Miler finished with over 4,000 all-purpose yards and accounted for 47 touchdowns throughout his career.

The versatile Miller is set to take his talents to Seton Hill, as the school announced him as an athlete last Wednesday.

“He has very deceptive speed, great moves, good hands and just a knack for making plays,” Basile said of his three-year starting quarterback.

“I just thought it was a good fit for my family and me,” he said.

“The coaches were great, Coach (Daniel) Day and Coach Ross (Fiegener), everybody was just really good at getting me to come in and I just think it’s a good fit all around academically and football-wise.”

The Bishop McCort Catholic boys basketball team has had to battle and scrap every step of the way this season, and Monday night at Penns Manor in the first round of the District 6 Class AA playoffs was no exception.