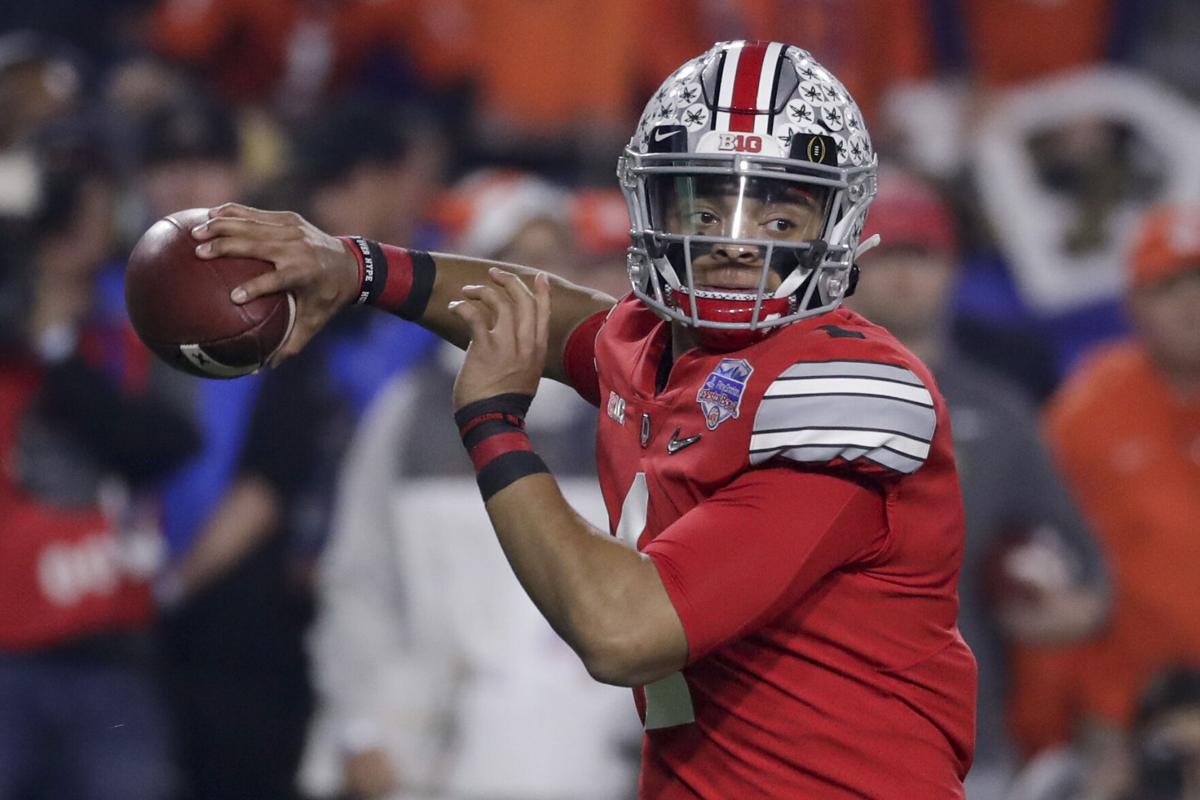 FILE - In this Dec. 28, 2019, file photo, Ohio State quarterback Justin Fields throws a pass against Clemson during the first half of the Fiesta Bowl NCAA college football playoff semifinal in Glendale, Ariz. When Fields got together with some of his teammates last Saturday to watch college football on TV, the mood was dark. “Distraught,” Fields said. (AP Photo/Rick Scuteri, File)

FILE - In this Dec. 28, 2019, file photo, Ohio State quarterback Justin Fields throws a pass against Clemson during the first half of the Fiesta Bowl NCAA college football playoff semifinal in Glendale, Ariz. When Fields got together with some of his teammates last Saturday to watch college football on TV, the mood was dark. “Distraught,” Fields said. (AP Photo/Rick Scuteri, File)

The Nittany Lions will face a Heisman finalist and The Athletic’s No. 1 listed College Football Freak, among other talented playmakers on both sides of the ball.

Here’s a list of the top five opposing players Penn State will meet this season. The Nittany Lions open the 2020 season at Indiana on either Oct. 23 or 24.

The Hoosiers’ 5-foot-11, 180-pound wide receiver emerged as one of the Big Ten’s best-kept secrets in 2019. Philyor tallied career-bests in yards receiving (1,002), catches (70) and touchdowns (five) to help carry the Hoosiers to an 8-5 record and an appearance in the Gator Bowl.

The senior missed the majority of last year’s Penn State-Indiana meeting as he left the game in the first quarter following an injury, but not before recording two catches for 50 yards. Penn State defeated Indiana, 34-27.

The Hoosiers host the Nittany Lions either on Oct. 23 or 24.

Simmons in 2019 paced a talented Michigan State defense with 90 total tackles, which placed him sixth in the Big Ten at season’s end. Simmons enters this season with 156 total tackles in his career, tops on the Spartans.

Penn State hosts Michigan State on either Dec. 11or 12.

In July, The Athletic’s Bruce Feldman dubbed Paye No. 1 on his list of 2020 College Football Freaks. Feldman highlighted Paye’s eye-popping time of 6.37 seconds in the three-cone drill — only one faster time has been recorded at the NFL combine — along with the edge rusher’s relative athletic score of 9.98. Relative athletic scores are used to simplify comparisons of a player's measurements on a scale from 1-10.

Paye headlines a Michigan defense that dropped a 28-21 contest at Penn State in 2019. He recorded a season-high 10 tackles in last October’s matchup against the Nittany Lions.

Michigan hosts Penn State on either Nov. 27 or 28.

After initially opting out of the season, Wade decided to give it one more go in Columbus. In June, NFL.com media analysts Daniel Jeremiah featured the Ohio State junior cornerback in an article titled, "Ohio State star could be NFL draft's next CB1."

Wade’s return makes him the Big Ten’s most talented cornerback.

Wade proved reliable in both run and pass coverage last season, as Pro Football Focus ranked him 20th in run-defense grades and 10th in coverage grades.

Fields thrived during his first year at Ohio State last year after transferring from Georgia.

The newcomer to the Big Ten passed for a conference-best 41 touchdowns against three interceptions, and he amassed 3,273 yards passing. Fields added another 10 rushing touchdowns and 484 yards rushing.

The 6-foot-3, 228-pound junior signal-caller claimed the Big Ten’s Graham-George Offensive Player of the Year and Griese-Brees Quarterback of the Year awards, and finished third in voting for the Heisman Trophy.

In last year’s win against the Nittany Lions, Fields was 16-for-22 passing for 188 yards and two touchdowns, and he had 21 rushing attempts for 68 yards rushing.

Like his teammate, Shaun Wade, NFL draft experts are high on Fields’ abilities. He’s expected to be one of the first two quarterbacks selected in the 2021 NFL draft.